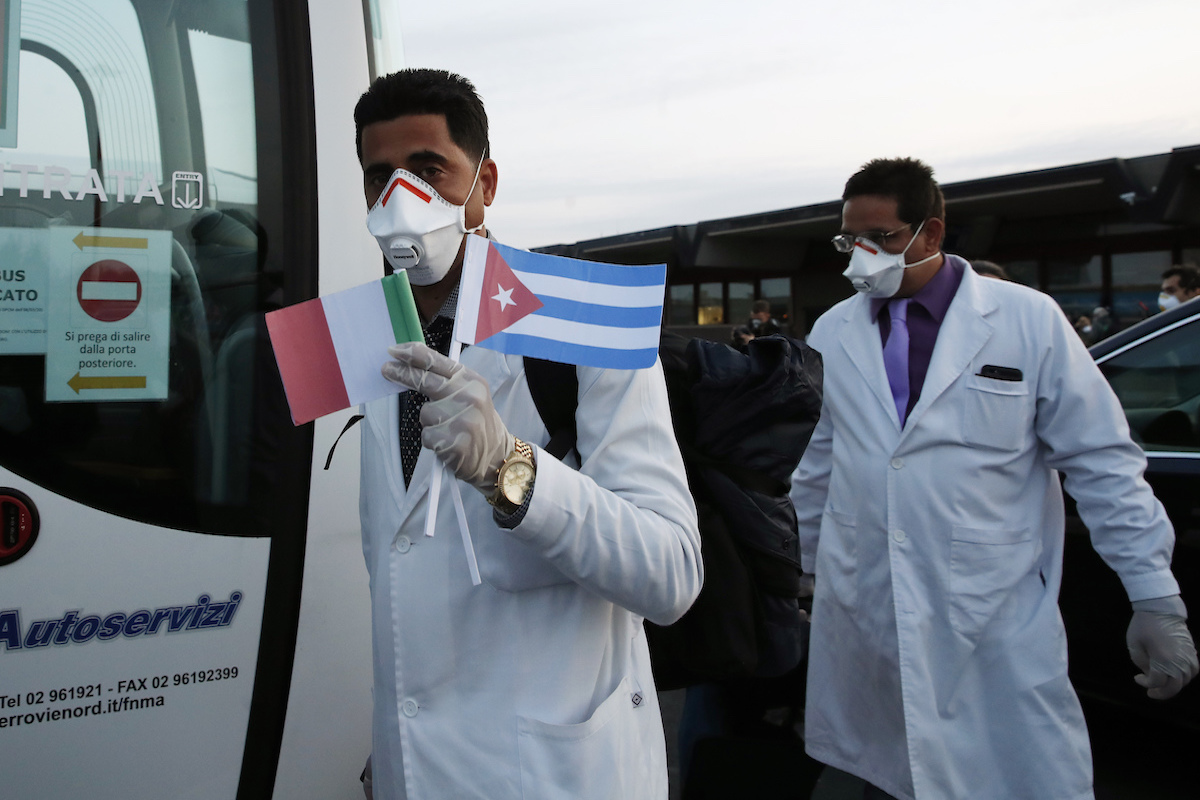 HAVANA (AP) — For two years the Trump administration has been trying to stamp out one of Cuba’s signature programs: state-employed medical workers treating patients around the globe in a show of soft power that also earns billions in badly needed hard currency.

Labeling the doctors and nurses as both exploited workers and agents of communist indoctrination, the U.S. has notched a series of victories as Brazil, Ecuador and Bolivia sent home thousands after leftist governments allied with Havana were replaced with ones friendlier to Washington.

The coronavirus pandemic has brought a reversal of fortune for Cuban medical diplomacy, as doctors have flown off on new missions to battle COVID-19 in at least 14 countries including Italy and the tiny principality of Andorra on the Spanish-French border, burnishing the island’s international image in the middle of a global crisis.

“I am aware of the position of the United States, but we are a sovereign country and we can choose the partners with which we are going to have cooperation,” Andorran Foreign Minister María Ubach said.

In the city of Crema in the hard-hit Lombardy region of northern Italy, 52 Cuban doctors and nurses set up a field hospital with 32 beds equipped with oxygen and three ICU beds.

“This is a strongly symbolic moment because the Crema hospital has been going through an extremely complicated situation from the start,” Lombardy’s top social welfare official, Giulio Gallera, said at the inauguration last week. “The number of patients who have filled and continue to fill the emergency room and departments has truly put the medical personnel to a hard test.” 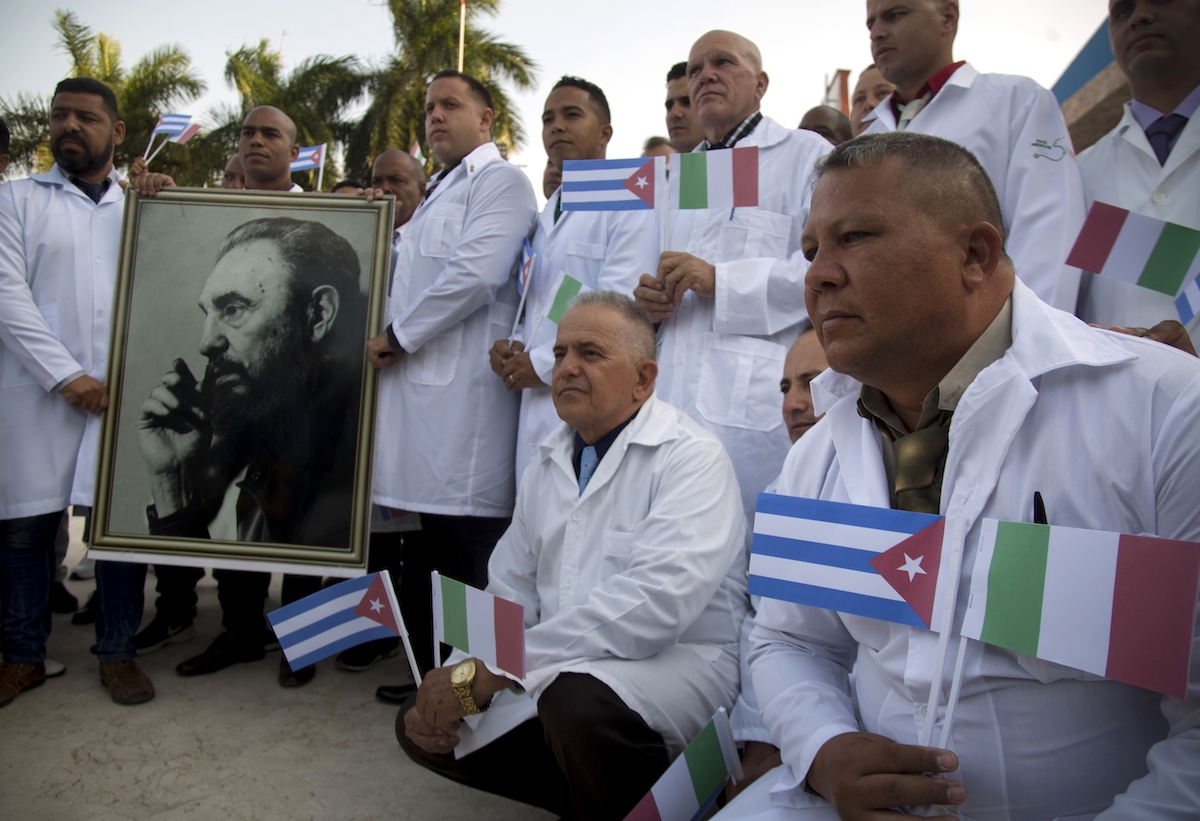 Several of the Cuban doctors and medical professionals that will depart for Italy to assist with the pandemic hitting the country pose for the press with a photo of Fidel Castro and flags of Italy and Cuba, in Havana, Cuba, Saturday, March 21, 2020. (AP Photo/Ismael Francisco)

The Trump administration has sought to cut off income to Havana as part of a long-term tightening of sanctions. And it continues to discourage countries from contracting Cuban medical workers despite the pandemic, arguing that their pay and conditions fall short of industry standards.

“The government of #Cuba keeps most of the salary its doctors and nurses earn while serving in its international medical missions while exposing them to egregious labor conditions,” the State Department said on Twitter last week. “Host countries seeking Cuba’s help for #COVID-19 should scrutinize agreements and end labor abuses.”

The government of #Cuba keeps most of the salary its doctors and nurses earn while serving in its international medical missions while exposing them to egregious labor conditions. Host countries seeking Cuba’s help for #COVIDー19 should scrutinize agreements and end labor abuses.

Cuba currently has about 37,000 medical workers in 67 countries, most in longstanding missions. Some doctors have been sent as part of free aid missions, but many countries pay the government directly for their services. In some other cases international health bodies have paid.

The most recent deployments of at least 593 doctors from the Henry Reeve Brigade —founded by Fidel Castro in 2005 and named after a 19th-century American volunteer who fought for Cuban independence from Spain— have also been to Suriname, Jamaica, Dominica, Belize, Saint Vincent and the Grenadines, St. Kitts and Nevis, Venezuela and Nicaragua, some of them reinforcing existing medical missions.

All have been billed as tied to the coronavirus epidemic, even though some of the countries have few confirmed cases so far. None of the agreements or financial terms have been made public.

Havana has said it receives about $6 billion a year from the export of public services, and medical services make up most of that. When Brazil expelled Cuban doctors in 2018, a few details emerged including that the country had been paying $3,100 per month for each doctor with 70% of that going into the pockets of the Cuban government. 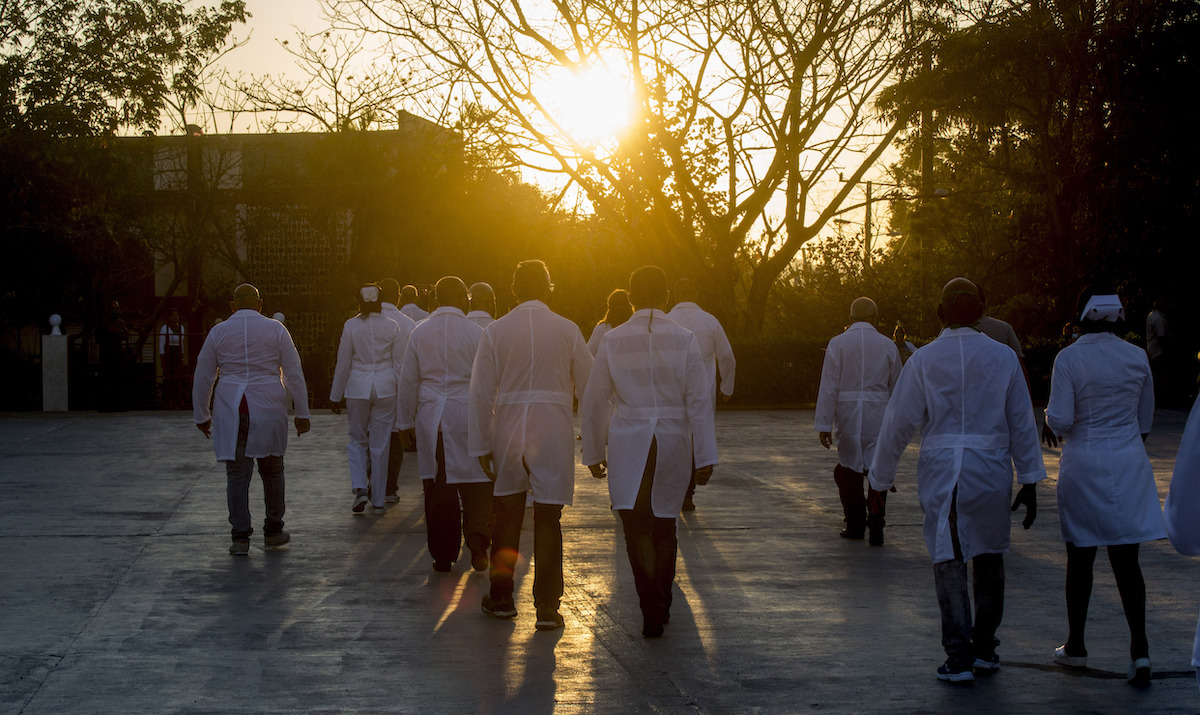 A brigade of 34 health professionals before traveling to San Cristobal and Nevis, to fight the coronavirus pandemic, in Havana, Cuba, Saturday, March 28, 2020. (AP Photo / Ismael Francisco)

Doctors typically make less than $100 per month working on the island, so doing an overseas mission means a significant pay hike even if those salaries remain low by international standards.

Andorran newspaper Diari d’Andorra reported Wednesday, citing Health Minister Joan Martínez Benazet, that one of the 39 Cuban doctors in the country had tested positive for coronavirus and was quarantined in a hotel. The Cuban government did not immediately respond to a request for comment.

Infection is a serious risk for those on the front lines. In Italy alone, over 10,000 medical workers have contracted the coronavirus and more than at least 69 doctors have died.

For most people the coronavirus causes mild or moderate symptoms, such as fever and cough. But for others, especially older adults and people with existing health problems, it can cause severe, life-threatening symptoms like pneumonia.

Cuban officials have been proudly posting videos of doctors being applauded as they arrive to begin work, and blasting the Trump administration for its criticisms.

“Shame on you. Instead of attacking Cuba and its committed doctors, you should be caring about the thousands of sick Americans who are suffering due to the scandalous neglect of your government and the inability of your failed health system to care for them,” Josefina Vidal, Cuba’s ambassador to Canada, wrote on Twitter.

Argentine officials have also said they are discussing possible coronavirus help from Cuba, and another mission should leave soon for Angola.

Cuba has a relatively high number of medical workers per capita—officials say there are currently about 90,000 in the country of 11 million.

That effort took place in cooperation with the administration of then-President Barack Obama, seen as easing relations ahead of the diplomatic thaw between the two countries later that year.

One response to “Cuban Docs Fighting Coronavirus Around World, Defying US”