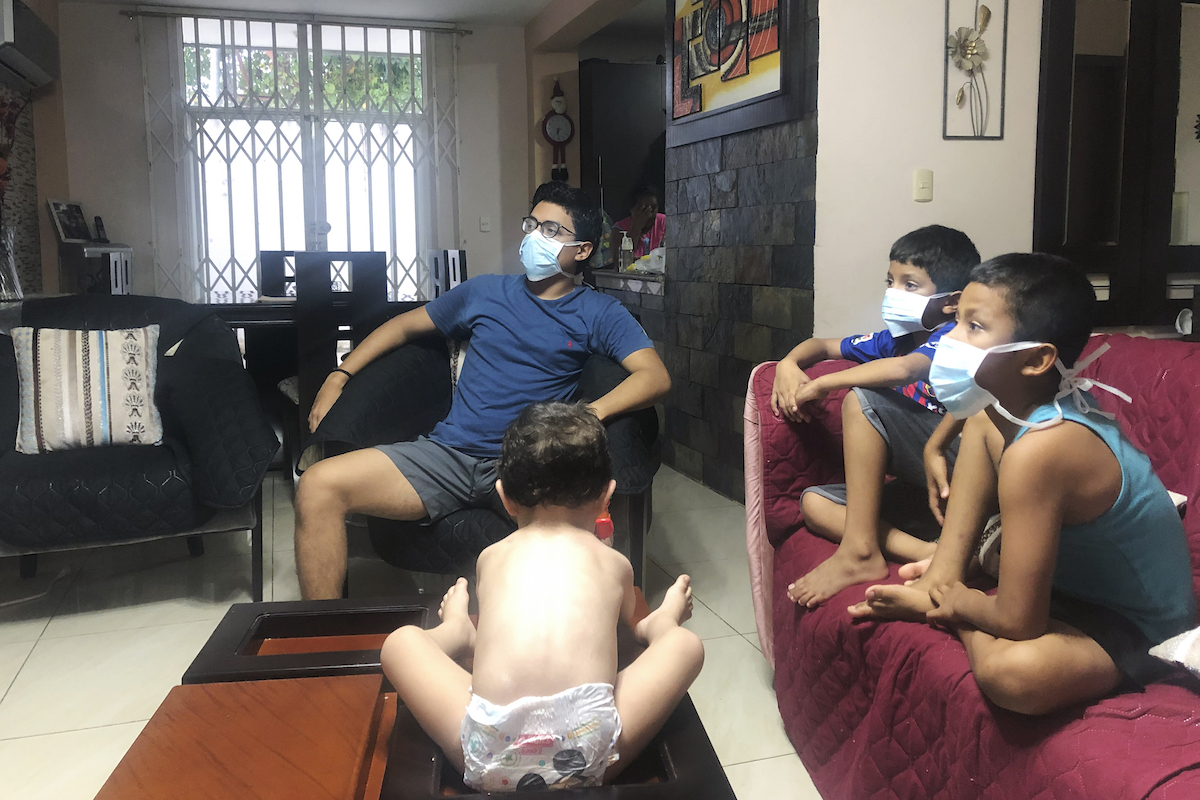 Relatives of Bella Lamilla, 71, the first person to be diagnosed with coronavirus in Ecuador, maintain quarantine in their home in Bagahoyo, Ecuador, Thursday, March 26, 2020. (AP Photo/Mariuxi Orellana)

BOGOTÁ, Colombia (AP) — No one should have known Bella Lamilla’s name.

But within hours of her diagnosis as Ecuador’s first coronavirus case, it was circulating on social media along with photos showing the retired schoolteacher unconscious and intubated in a hospital bed. Her large, close-knit family watched in horror as a dual tragedy began to unfold: While Lamilla fought for her life in intensive care, strangers began tearing apart her reputation online.

“Knowing she had it, the old lady didn’t care and went all around,” one person commented on Facebook.

In India, doctors have reported being evicted by landlords worried they’ll spread coronavirus to other tenants. In the town of St. Michel in Haiti, people stoned an orphanage after a Belgian volunteer was diagnosed. In Indonesia, an early coronavirus patient was subjected to cruel innuendo suggesting she contracted it through sex work.

Psychologists say the desire to identify and castigate those who are ill harkens to an age-old instinct to protect oneself and relatives from catching a potentially fatal disease—and a belief, however unfounded, that those who get it bear some responsibility.

“Illness is one of the fundamental fears humans have been dealing with their entire evolution,” said Jeff Sherman, a psychology professor at the University of California, Davis. “It’s not really surprising they would be hostile toward someone they believe is responsible for bringing illness into their community.”

Located along a sage-colored river about an hour from Ecuador’s Pacific coast, Babahoyo has a small-town feel despite its population of 95,000. The extended Lamilla family is well-known there and prominent, including doctors, engineers and schoolteachers.

Bella Lamilla, one of six sisters, lost her husband to leukemia and raised their four children on her own. Three years ago she followed a daughter to Spain to enjoy retirement with three grandchildren in a sleepy Madrid suburb.

At least once a year, she flew back to Ecuador, where a flock of relatives would greet her at the airport.

On February 14 she boarded a 12-hour Iberia flight to Guayaquil. She noticed people coughing on the plane and tried to protect herself somewhat by covering up in a blanket. Arriving in Ecuador, Lamilla sailed through immigration with no questions asked, even though she’d started feeling feverish.

“I thought she was just unwell and tired from the trip,” said her daughter, who asked not to be identified for fear of repercussion from authorities. 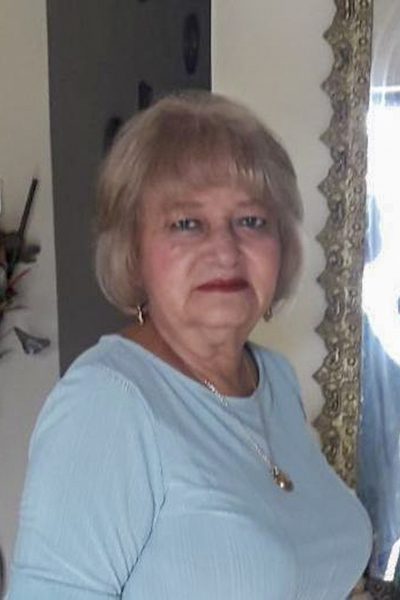 The next day Lamilla’s head was pounding. About two dozen relatives feted her at a welcome-home barbecue, where she didn’t seem her usual energetic self.

She went to two different local doctors, who dismissed her ailments as side effects of a urinary infection or a possible muscular problem. When she began having difficulty breathing a week later, relatives took her to a private hospital in the nearby city of Guayaquil.

The Alcivar Hospital said it alerted the Ministry of Public Health about her case February 22, two days after Lamilla arrived, but got no response. Only the National Institute for Public Health Investigation could do the test, the clinic said, and it wasn’t until Feb. 27 that authorities agreed to analyze a specimen for coronavirus.

Finally a doctor pulled Lamilla’s children aside and delivered the news: She was Ecuador’s “patient zero.”

Relatives woke each other up by phone. One, a doctor, told everyone not to leave home—they’d all potentially been exposed, and some had already begun experiencing symptoms.

The next day, the family watched from their self-imposed quarantine as then-Health Minister Catalina Andramuño announced Ecuador’s first case in a live news conference.

On Facebook and WhatsApp, a medical document with Lamilla’s name began circulating. Photos and videos showing the petite woman with short blonde hair being transported in a hospital bed appeared online. Later, a map with addresses of the family’s homes in Babahoyo began making the rounds as well.

Facebook users dredged up old photographs of the family at a soccer game to imply they’d exposed thousands.

“How irresponsible,” one man remarked on pictures of relatives celebrating Lamilla’s recent return, before her diagnosis.

“Everyone was on high alert,” said Pedro Orellana, the ex-husband of one of Lamilla’s sisters. “We didn’t know what people were capable of doing in their desperation.”

A few family members defended Lamilla online, while others, too distressed by the vitriol, avoided social media entirely. They knew Lamilla would have been mortified to discover she’d potentially spread coronavirus to relatives. At that point, she was already on a ventilator and under sedation.

“I couldn’t look at anything,” Lamilla’s daughter said. “I didn’t want to hurt my heart.”

Minutes after Indonesia announced its first two cases, the names of Sita Tyasutami and her mother leaked online with their phone numbers and home address. Hundreds of WhatsApp messages flooded in.

People shared photos of Tyasutami, a 31-year-old professional dancer, shimmying in a feathered Brazilian samba bikini, and spread baseless speculation that she contracted the virus after being “rented” by a foreign male client.

“My face is everywhere now, I can’t hide it,” she said.

Studies show that when people link disease to behavior, they are more likely to blame the sick and ostracize them. Researchers have found people harbor negative attitudes towards individuals with a wide range of illnesses, with HIV/AIDS often at the top. But even those with seemingly lesser conditions can experience stigma.

A survey in Hong Kong several years after the 2003 SARS outbreak, another coronavirus that killed nearly 800, found a small portion of the population still stigmatized those who had contracted the illness.

“Generally speaking, stigma of infectious diseases can be as devastating to the infected individuals as the diseases themselves,” the authors wrote.

“Blame is a natural response to this,” said Patrick Corrigan, a psychology professor at the Illinois Institute of Technology. “That’s what’s feeding this.”

For most people the coronavirus causes mild or moderate symptoms like a fever and cough. But for others, especially older adults and people with existing health problems, it can cause more severe illness, including pneumonia, and lead to death.

Mental health experts say that as more celebrities and politicians announce they have the virus, the rebuke many coronavirus patients have felt could ease. Actors Tom Hanks and Rita Wilson won plaudits for publicly discussing their cases, putting a well well-liked faces to COVID-19.

But for less famous patients whose names have been involuntarily shared, the experience has been far more isolating.

On February 13, Lamilla’s heartbeat began to slow. Not allowed to visit, family members waited by their cellphones for updates. Around noon the hospital director called to say Lamilla had just taken her final breaths.

By that time, about a dozen relatives had tested positive. One of the most seriously ill was Lamilla’s youngest sister, Charito Lamilla, 61. Upon hearing the news, she began struggling to breathe. Relatives tried for two hours to get an ambulance—but none arrived.

Provincial Gov. Camilo Salinas said later that an ambulance that should have been available was transporting a different coronavirus patient but got blocked by people who did not want it to reach the medical center, fearful of contagion.

Anxious to get her help, a relative drove Charito Lamilla to the hospital, exposing himself to possible contagion. A day later she became Ecuador’s second coronavirus fatality.

The country has since become an epicenter of the outbreak in Latin America. Overwhelmed hospitals in Guayaquil are turning patients away, and some are dying in their homes without ever being treated or even diagnosed.

Lamilla’s relatives, still in quarantine, are trying to recover from both the loss of Bella and Charito and the psychological torment COVID-19 left behind.

“Patient zero didn’t create the virus,” Orellana said. “She never knew she had it.”

Associated Press journalists Victoria Milko and Edna Tarigan in Jakarta and Michael Weissenstein in Havana contributed to this report.