As Coronavirus Spreads, Some Venezuelans Opt to Return Home 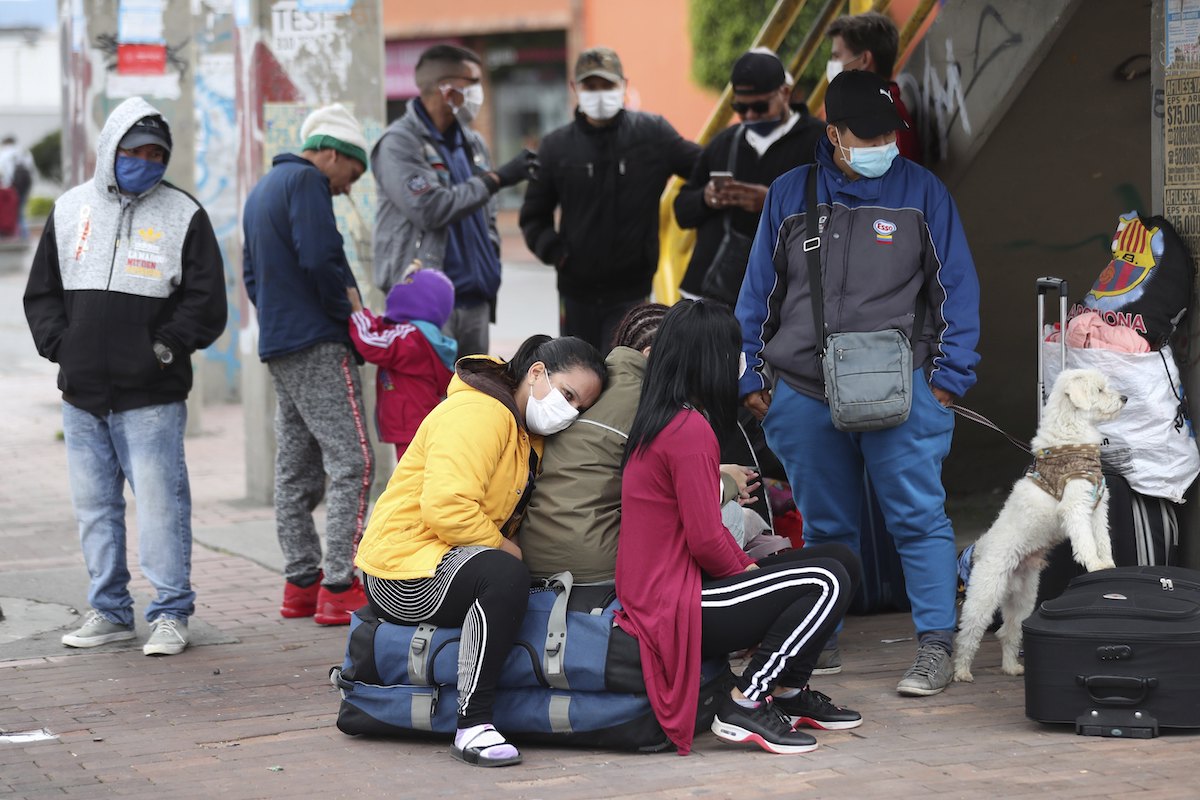 Venezuelan migrants rest from walking toward the Venezuelan border after a lockdown ordered by the government in an effort to prevent the spread of the new coronavirus, in Bogotá, Colombia, Monday, April 6, 2020. (AP Photo/Fernando Vergara)

BOGOTÁ, Colombia (AP) — As Colombia continues with a nationwide lockdown to control the new coronavirus, some of the millions of Venezuelans who have gone abroad in recent years are deciding they are better off back in their homeland.

According to Colombian authorities, nearly 600 Venezuelans returned to their country over the weekend through a humanitarian corridor.

Many, like Jesús Ocaña, said they have not been able to find work in a country where businesses remain shuttered and people have been ordered to stay inside because of the coronavirus pandemic.

The 21-year-old was heading back to Venezuela by foot Monday from Bogotá—a journey he expected to take him about 15 days.

“We all left Venezuela with a dream of getting ahead,” Ocaña said. “But we’ve been left without jobs and any way of sustaining ourselves.” 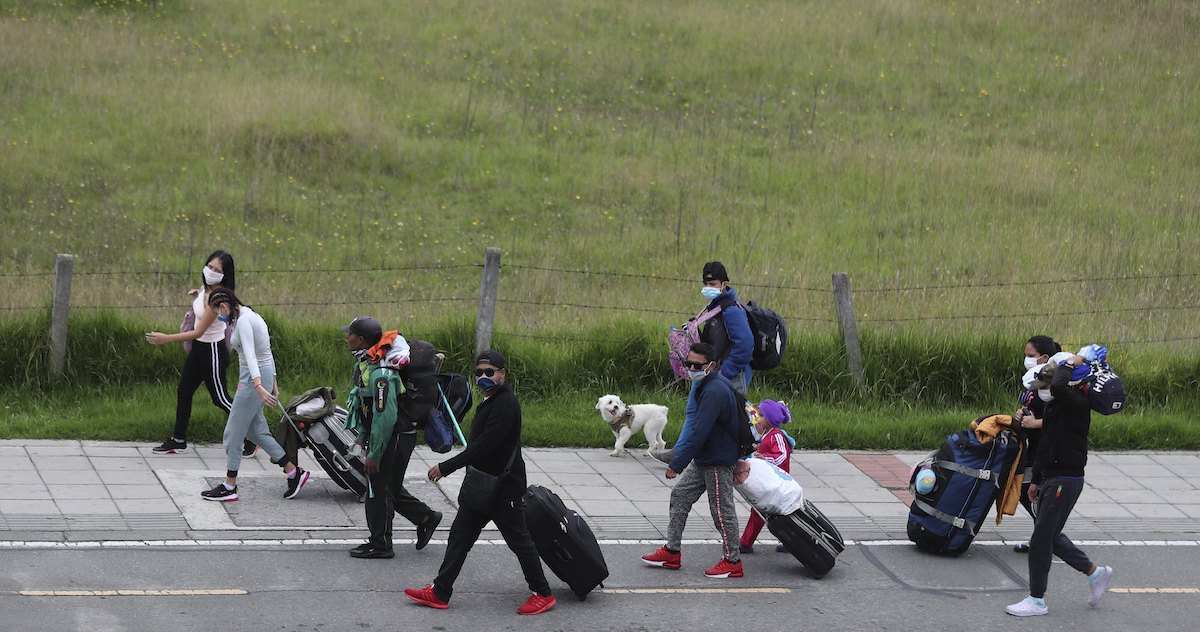 Venezuelan migrants leave on foot toward the Venezuelan border after a lockdown ordered by the government in an effort to prevent the spread of the new coronavirus, in Bogotá, Colombia, Monday, April 6, 2020. (AP Photo/Fernando Vergara)

The returning migrants represent a small number of the total who live in Colombia. An estimated 1.8 million Venezuela reside in the neighboring Andean nation. According to the United Nations, over 4.5 million Venezuelans have fled in recent years, deciding to abandon a nation suffering a deep economic contraction and humanitarian crisis.

Migration officials say tens of thousands of Venezuelans arrived in January and February, but at lower levels than typically seen. Meanwhile, a higher number fled to other countries, mostly through flights from the Bogotá airport.

Venezuelan President Nicolás Maduro has said he will welcome back any compatriots returning by land. The border with Colombia is officially closed and diplomatic relations severed, but a humanitarian corridor was created. He said Sunday at least 1,500 have returned thus far and that he expects about 15,000 total to come back. 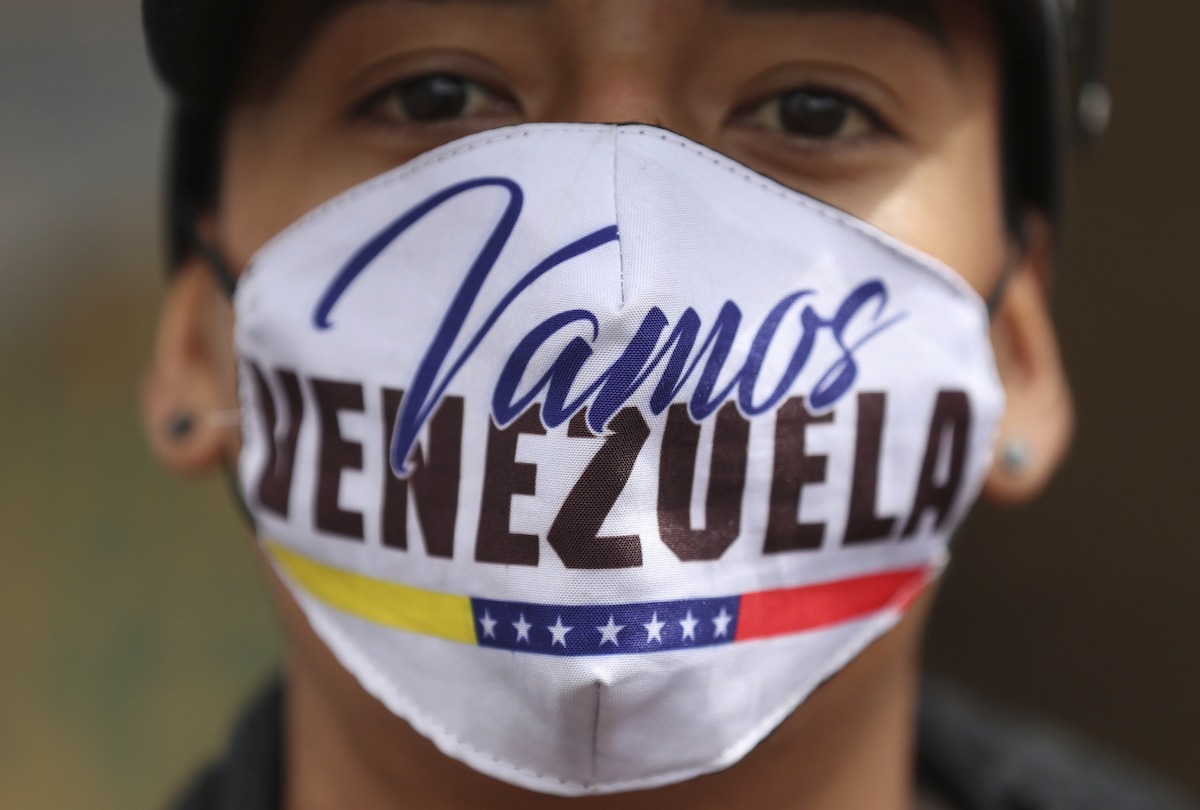 A Venezuelan migrant wearing a face face mask that reads in Spanish “Let’s go Venezuela” walks toward the Venezuelan border after a lockdown ordered by the government in an effort to prevent the spread of the new coronavirus, in Bogotá, Colombia, Monday, April 6, 2020. (AP Photo/Fernando Vergara)

The head of state said the Venezuelans will be “rigorously” tested for coronavirus symptoms and required to quarantine for 14 days as a precaution.

“We’re going to receive them with love,” Maduro said.

Nonetheless, some Venezuela have posted videos on social media saying soldiers detained them at a bus terminal in the border town of San Antonio. One video showed dozens sprawled out on blankets on the ground. The migrants include pregnant women, children and the elderly and complained of little to not access to food and water.