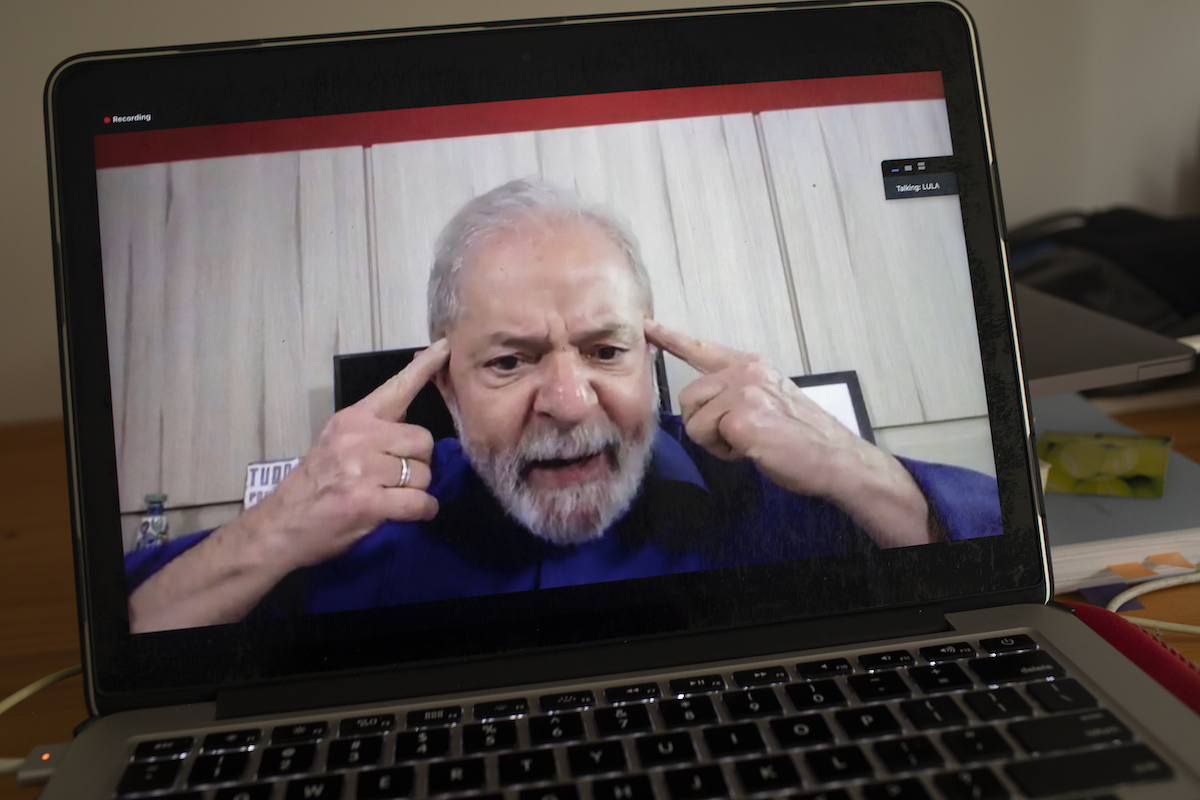 Brazil’s former President Luiz Inácio Lula da Silva speaks from his home in Sao Paulo during an interview with The Associated Press via a cloud-based video conferencing service, as seen from a laptop in Rio de Janeiro, Brazil, Wednesday, April 8, 2020. (AP Photo/Silvia Izquierdo)

SÃO PAULO (AP) — In home isolation just months after his release from jail, Brazil’s former leader Luiz Inácio Lula da Silva said Wednesday that President Jair Bolsonaro needs to change his dismissive approach to the new coronavirus or risk being forced from office before the end of his term in December 2022.

The former president known as Lula said in an interview with The Associated Press that Bolsonaro’s defiance of calls for social distancing hamper the efforts of governors and mayors to contain the virus.

He also argued Brazil may need to print money to protect low-income workers and keep people at home, a proposal sure to raise concern in a country with a history of hyperinflation and a sliding currency.

Da Silva, who governed between 2003 and 2010 at time when Brazil’s economy was strong, acknowledged that Bolsonaro is unlikely to heed growing opposition calls to step down and that there are not enough votes in congress for impeachment.

“Brazil’s society might not have the patience to wait until 2022, though,” da Silva said in a video call. “The same society that elected him has the right to remove this president when it notices he is not doing the things he promised. A president who has made mistakes and is creating a disaster. Bolsonaro, at this moment, is a disaster.” 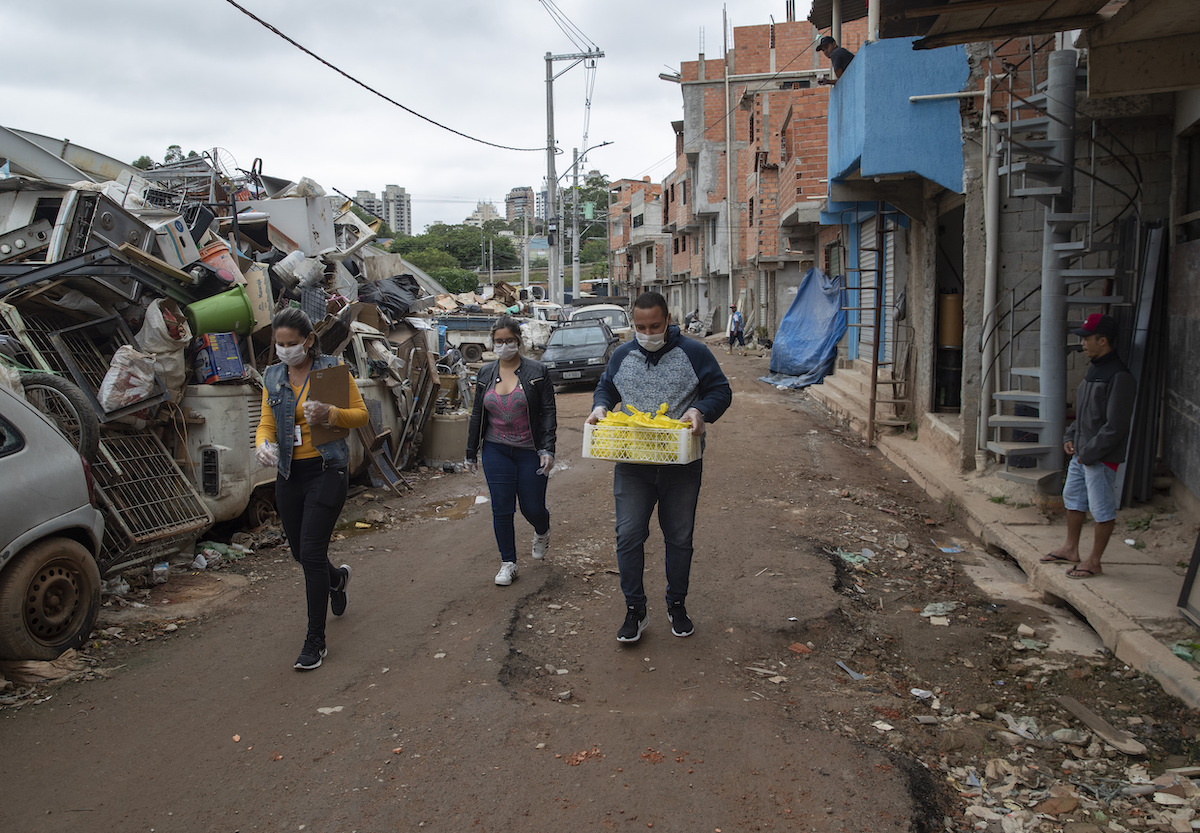 Volunteers carry meals to be distributed to residents during a quarantine imposed by the state government to help stop the spread of the new coronavirus in São Paulo, Brazil, Wednesday, April 8, 2020. (AP Photo/Andre Penner)

Some people in several regions that voted massively for Bolsonaro in the 2018 elections are disillusioned with him, banging pots outside their homes in regular protests in the last two weeks. The president’s downplaying of the outbreak puts him at odds with almost all of the country’s 27 governors.

About 800 people have died from the COVID-19 disease in Brazil so far, and there are almost 16,000 confirmed cases, the most in Latin America. Brazil expects a peak in virus cases in late April or early May.

Last month, da Silva praised Sao Paulo Gov. João Doria, a former ally of the president, for imposing restrictions designed to curb the spread of the virus. Bolsonaro, who frequently refers to da Silva as a “former inmate,” then said in a radio interview that he feels embarrassed when conservative politicians who have turned on him during the crisis receive praise from the leftist leader.

“I am just recognizing those who have done a more effective job,” da Silva said, adding that Doria will remain a political adversary.

Da Silva, a 74-year-old cancer survivor, is in isolation with his girlfriend and two dogs in the city of São Bernardo do Campo, on the outskirts of Sao Paulo, since returning from a trip to Europe. He said he has not had any symptoms of the virus, nor been tested, and is meeting very few politicians. Most of his conversations are now online.

The former president said his 580 days in jail have helped him cope better with health recommendations to remain home. He is free while appealing corruption and money laundering convictions, which he says are politically motivated.

“I trained spiritually to live well. It is not easy to live in 15 square meters, seeing family once a week,” he said. “Now I am at home with my girlfriend Janja living with me. It is much better. I have space, people to talk to all the time.”

Bolsonaro has challenged recommendations of the World Health Organization and of his own health ministry on social distancing and other measures to curb the virus. He has repeatedly called COVID-19 “a little flu.” 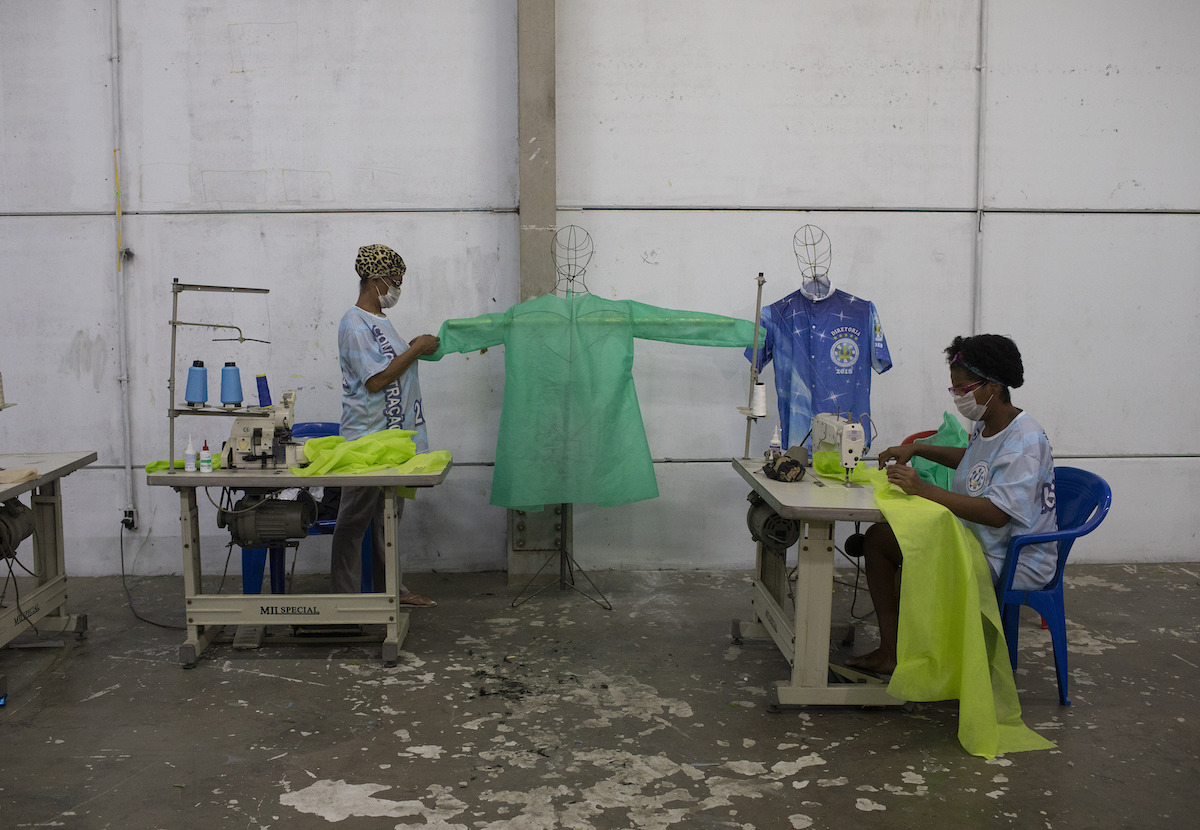 Former president da Silva believes Brazil might need to print money to avoid the closing of businesses and social chaos. Brazil’s economy has suffered since 2015, with about 12 million people unemployed and three times as many people in the informal sector and working gigs.

“Those who need liquidity at this moment are poor people. They need it to buy soap, hand sanitizer. That’s who needs liquidity, not the Brazilian financial system,” he said. “To beat the coronavirus we need more state, more action from public authorities, from making new money and ensuring it reaches the hands of the people.”

Da Silva’s prescription runs counter to the ideology running through Bolsonaro’s administration, led by the University of Chicago-trained Economy Minister Paulo Guedes. After his appointment, he promised to shrink both the size and influence of the state through vast privatizations and by reining in state bank lending.

Since the outbreak, there has been some recognition of the need to provide financial relief. Among other things, state bank Caixa Economica Federal slashed interest rates on overdrafts and credit card installments, and the government allowed people to withdraw the equivalent of one month’s minimum wage from retirement accounts. It also approved monthly payments of $117 to help keep low-income workers afloat, which are expected to begin Thursday.

Still, it isn’t enough, da Silva said. He added that support for possibly printing money isn’t radical, but rather a necessary measure in a desperate circumstance.

“In a time of war you do things that aren’t normal because what matters is survival,” he said. “The coronavirus is an invisible enemy whose shape we know, but we still don’t know how to defeat it.”

Brazilian leftist politicians of different parties, including da Silva’s Workers’ Party, published a letter last week calling for Bolsonaro’s resignation over his management during the pandemic. The former president didn’t sign it, but said his views are clear.

“There’s no way out with Bolsonaro if he doesn’t change his behavior,” he said. “It would be much easier to apologize, admit he was wrong, tell the Brazilian people that he is sorry.”