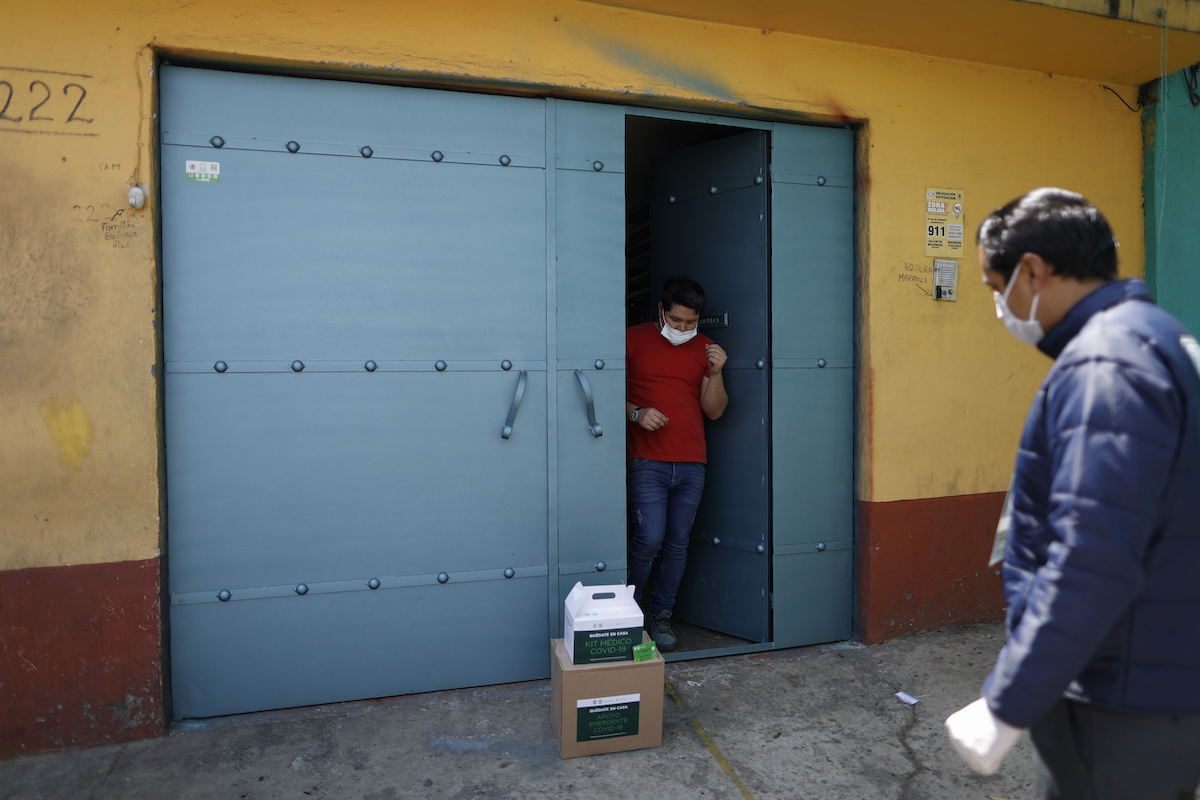 A man whose aunt is suffering from symptoms consistent with COVID-19 receives a delivery of medical and food supplies dropped off by workers from the city government, in the Coyoacán district of Mexico City, Thursday, April 9, 2020. To help halt the spread of the new coronavirus, the Mexican megalopolis is making home deliveries to households with a symptomatic person, providing kits containing food staples, face masks, gloves, antibacterial gel, paracetamol, a thermometer, and benefits cards with a balance of 1,000 pesos (around $42). (AP Photo/Rebecca Blackwell)

MEXICO CITY (AP) — The Mexico City government is sending out teams to help the home-bound and the homeless during the shutdown declared to combat the coronavirus, officials said Thursday.

Almudena Ocejo, the city’s secretary of social inclusion and welfare, said the program aims to keep people off the streets while allowing them to survive at home.

Because the country has tested relatively few people for the virus —only about 16,700 tests have been done so far in a nation of 125 million— the federal government is recommending that people with non-urgent symptoms simply isolate at home.

City workers wearing face masks distribute packages of simple medical supplies like a thermometer, disinfectant, face masks and paracetamol to people who have called in to a government hot line reporting symptoms of possible COVID-19 illness.

Packages have been delivered so far to about 2,450 people whose symptoms are considered in line with a potential coronavirus infection. Food and monetary support is also made available.

The city says 180,000 people have filled out forms on the hot line as possible cases. Of those, 250 reported symptoms serious enough to warrant visits by emergency medical teams, but only six were directly taken to a hospital. The city has 855 confirmed coronavirus cases, although the Health Department estimates there are probably as many as 6,000 infected people in the city. 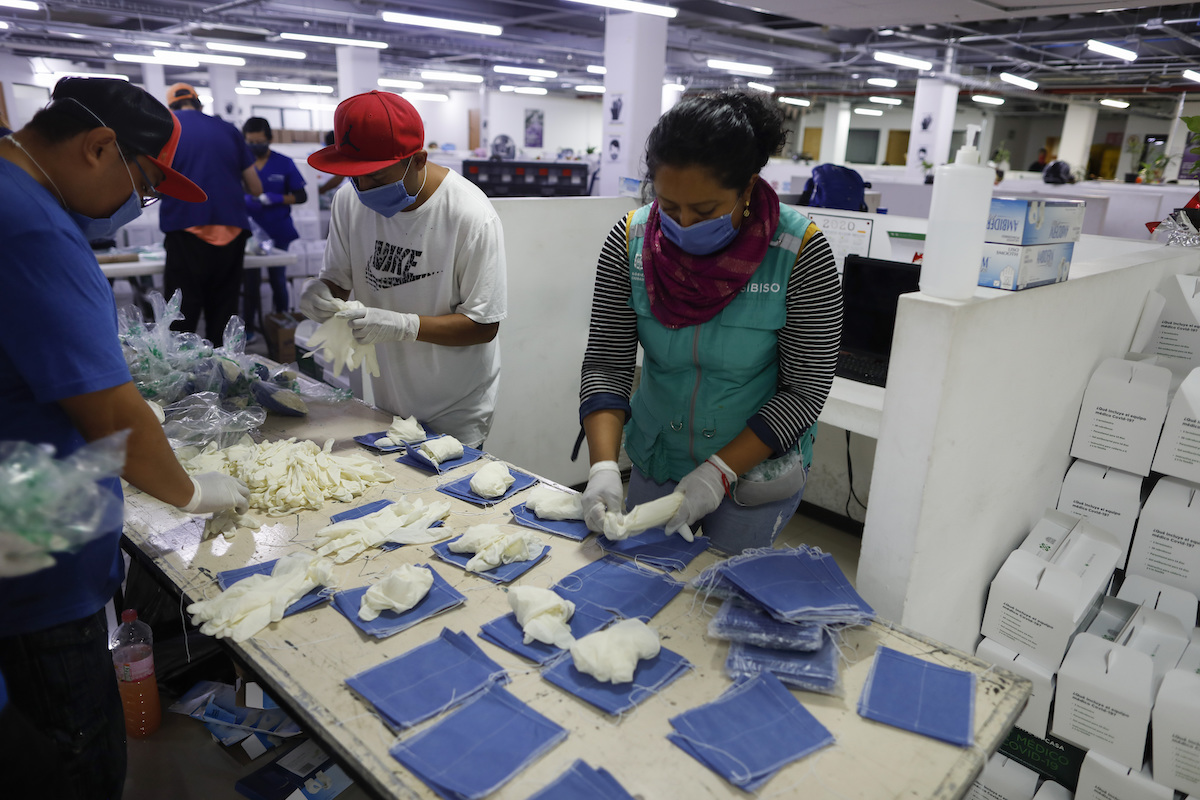 City workers sort gloves and masks as they prepare medical supply kits for home deliveries to households with a member suffering from symptoms of COVID-19, in Mexico City, Thursday, April 9, 2020. (AP Photo/Rebecca Blackwell)

Teams are also calling elderly people living alone to see if they have family support networks. If they don’t, they will get visits or phone check-ins.

Other teams are out trying to persuade the city’s 2,000 to 4,000 homeless people to go to shelters, which are being expanded. The city’s main shelter has about 600 homeless housed now, near its 700-bed capacity.

By law, the homeless can’t be forced to enter shelters, but Ocejo said she has seen an increased willingness among them to do go since the health emergency was declared and social distancing measures were imposed in March. That may be in part because the handouts and odd jobs that the homeless rely on for income are drying up as foot traffic decreases rapidly.

“We contact about 65 people per day,” Ocejo said of the homeless. “Normally, six or seven people decide to got to a shelter. Recently we have seen 10 or 12 who go.”

The city is thinking of expanding shelter capacity with a new 300-bed tent-like facility in a vacant lot. 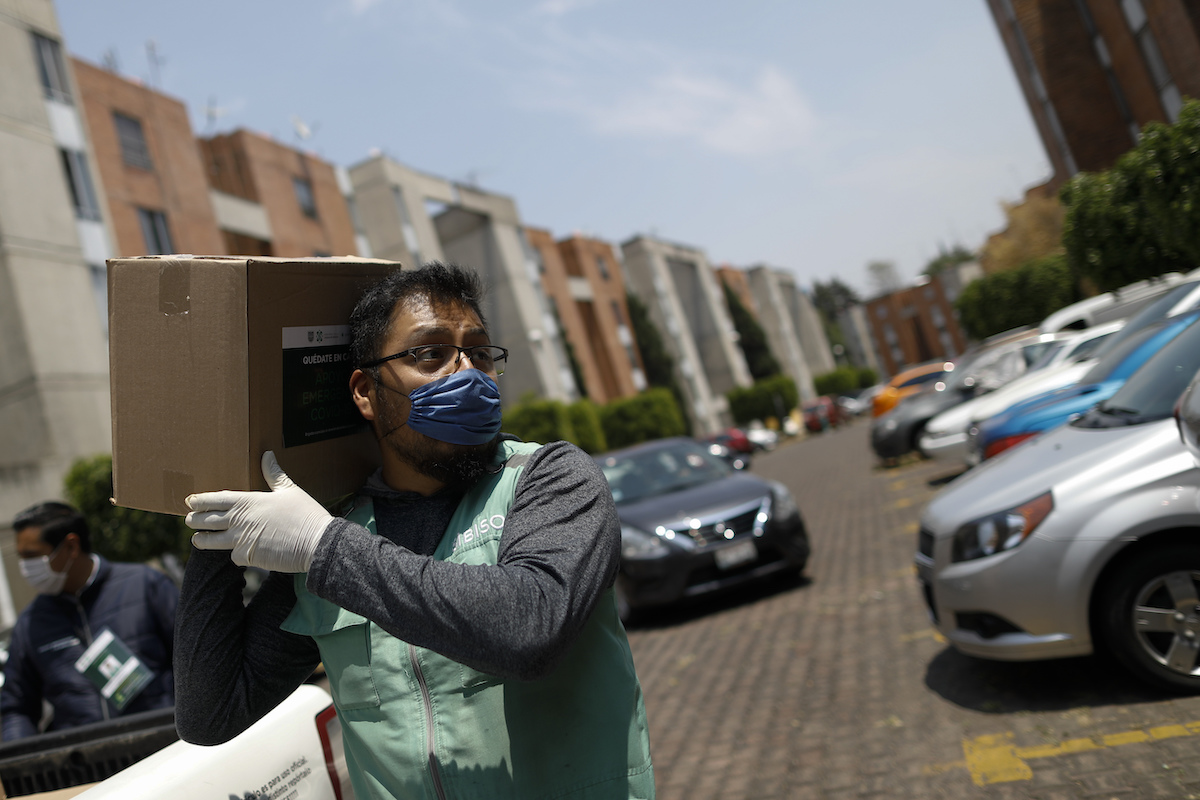 A city worker carries a food supply kit during home deliveries to households with a member suffering from symptoms of COVID-19, in the Coyoacán district of Mexico City, Thursday, April 9, 2020. (AP Photo/Rebecca Blackwell)

Officials have set up a WhatsApp message group for the city’s 9 million inhabitants to report homeless people who might need help. Reports coming into that site are also up, Ocejo said.

And in a country where “meals on wheels” efforts are not widespread, city and community-run low-cost kitchens known as “comedores populares” or “comedores comunitarios” keep churning out about 65,000 meals a day. Most customers these days are bringing their own plastic dishes to take food home, but sit-down service is still available for the homeless.