In Mexico, Beach Towns Block Themselves Off Because of Virus 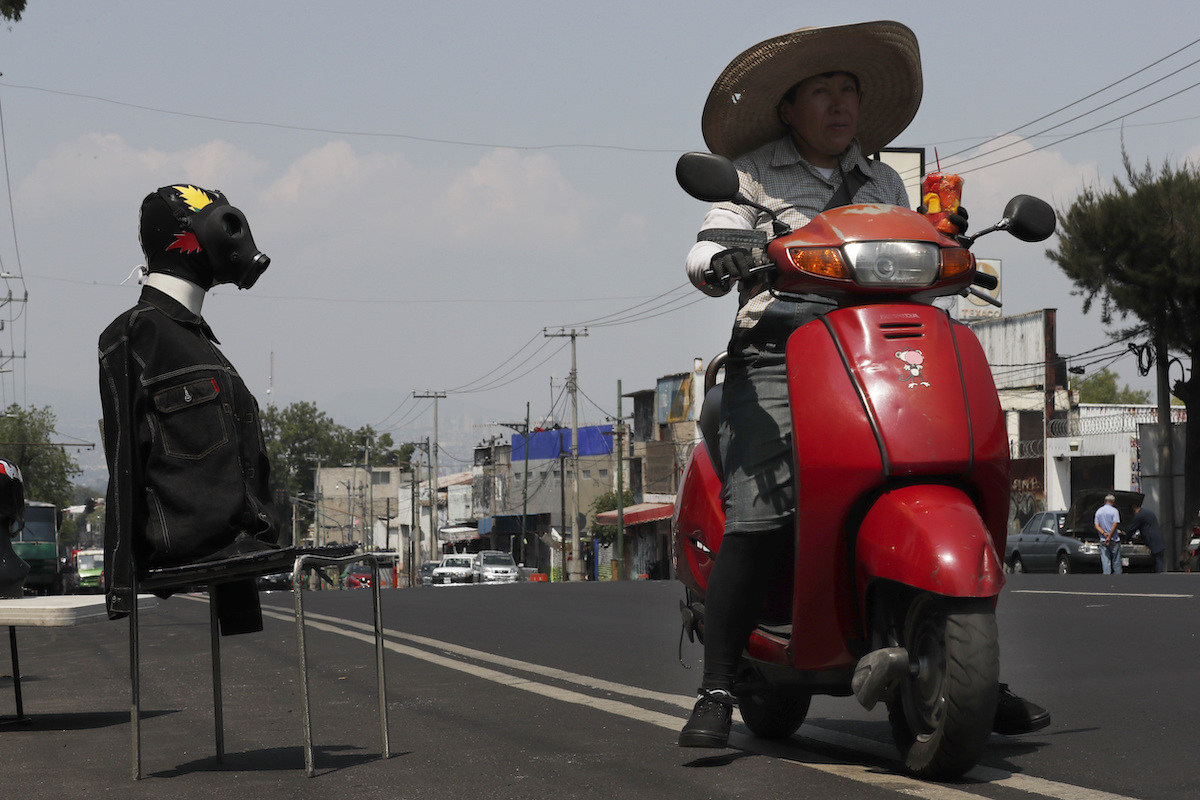 A man rides past a mannequin wearing a gas mask, a wrestling mask and a jean jacket, as a way to advertise his Mexican wrestling mask shop, in Iztapalapa, Mexico City, Thursday, April 9, 2020.(AP Photo/Marco Ugarte)

MEXICO CITY (AP) — In Mexico, beach towns have begun blocking off roads —in some cases, constructing barricades of rubble across roadways— to seal themselves off from the outside world in a bid to stop the new coronavirus from entering.

The Gulf of California beach town of Puerto Peñasco announced Friday that two of three highways leading into the town would be closed, and anyone entering would be subject to an enforced 12-day quarantine. The only people who can enter are residents of the seaside town also known as Rocky Point.

“Nobody who is not a resident of Peñasco will be allowed to enter; relatives, friends, tourists and people from outside will be prohibited from entering, in order to avoid possible contagion,” said Puerto Peñasco Mayor Kiko Munro.

Oscar Castro, the town’s health director, acknowledged that residents cannot, by law, be banned from leaving, or returning; but if they decide to return, they’ll be quarantined.

Castro said Puerto Peñasco currently has no coronavirus cases, and officials want to keep it that way; Puerto Peñasco has a strictly enforced curfew. Puerto Peñasco is a popular among Americans —it is close to Phoenix and Tucson— and the restrictions have drawn a mixed reaction.

Shandra Keesecker-Rivero, the co-founder of the “RockyPoint360” news group, wrote: “Many foreign residents [i.e. from U.S. that have homes here] are frustrated in particular, and locally there are questions as to what if any leniency there is if someone has to go to another city for already scheduled healthcare appointments, as Puerto Peñasco does not have a broad scope of specialized services as it is.”

“At the same time, there is a segment of the local population – both Mexican and foreign expats – that are impressed with and applaud the measures the local administration has taken as there are yet to be any confirmed cases of COVID-19 here. They see this as efforts to prevent COVID-19 reaching our shores,” wrote Keesecker-Rivero. 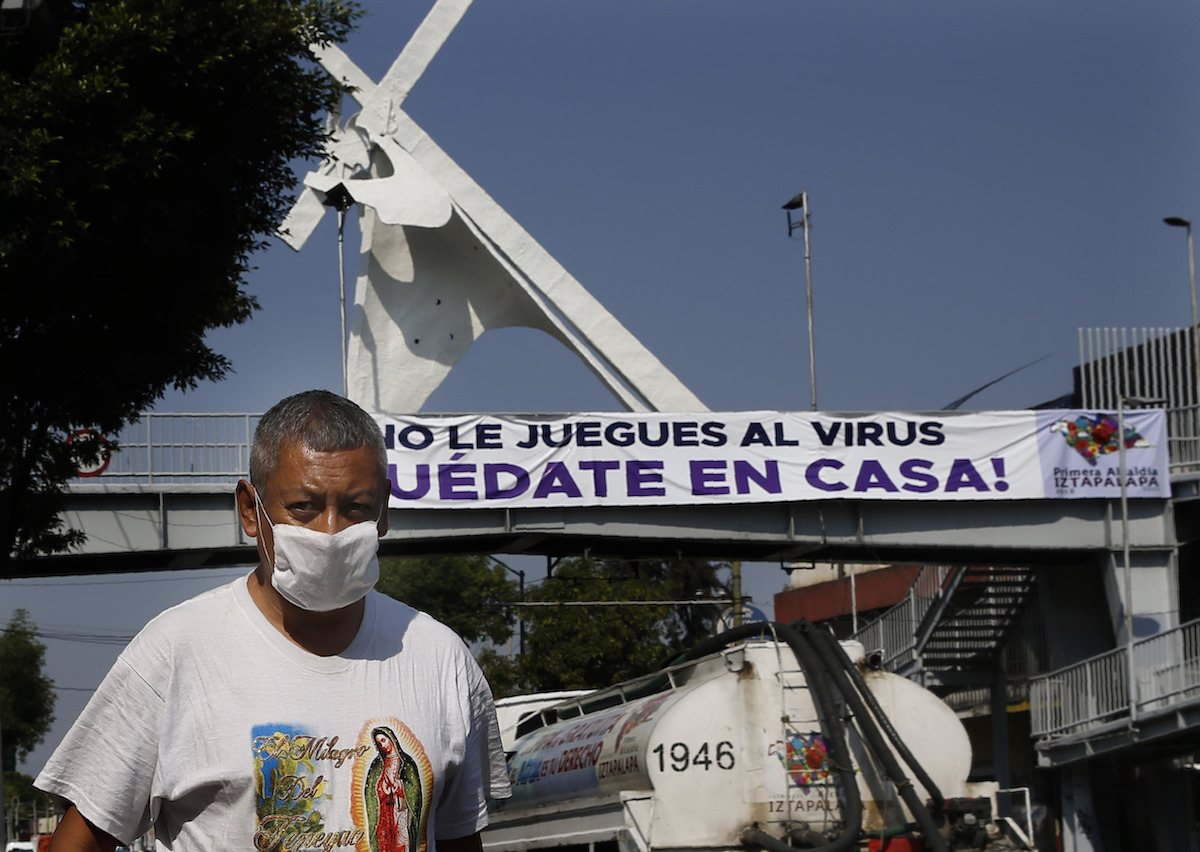 A man walk past a banner that reads in Spanish “Don’t play with your life. Stay home,” as he wears a mask against the spread of the new coronavirus in Mexico City, Thursday, April 9, 2020. (AP Photo/Marco Ugarte)

Besides lacking health care resources, beach-side communities can see what has already happened in heavily touristed areas: Mexico’s highest per-capita infection rate is in the Caribbean coast state of Quintana Roo, home to resorts like Cancún.

In the nearby beach community of Sayulita, residents posted videos of themselves at informal, vigilante-style roadblocks, turning back visitors’ cars.

That came after Nayarit Gov. Antonio Echeverría launched a harsh verbal attack on tourists from the bigger neighboring state of Jalisco, blaming them for “their irresponsible presence… some even come when they are infected.”

“They will always be welcome, but now on this occasion they should stay at home,” Echeverría said.

Some tourist towns tried a more polite way of saying: “Stay away.”

Tepoztlán, a scenic mountain town just south of Mexico City, blocked access roads but issued a statement saying “Tepoztlán is taking a break and from their homes, our people are waiting to once again receive visitors, because now, separated we are closer.”

To some extent, the actions of governors and mayors are just the logical extension of federal government policy. The Interior Department said approvingly in a statement that “the governors have agreed to make an effort to keep tourist destinations closed.”

In the indigenous lakeside community of Zirahuén, the largely Purepecha Indian residents erected improvised barricades of tree branches and rocks to block tourists from the nearby Michoacan city of Morelia from entering.

“No entry to Zirahuén, all the roads are blocked,” read one hand-written sign on the barricades. 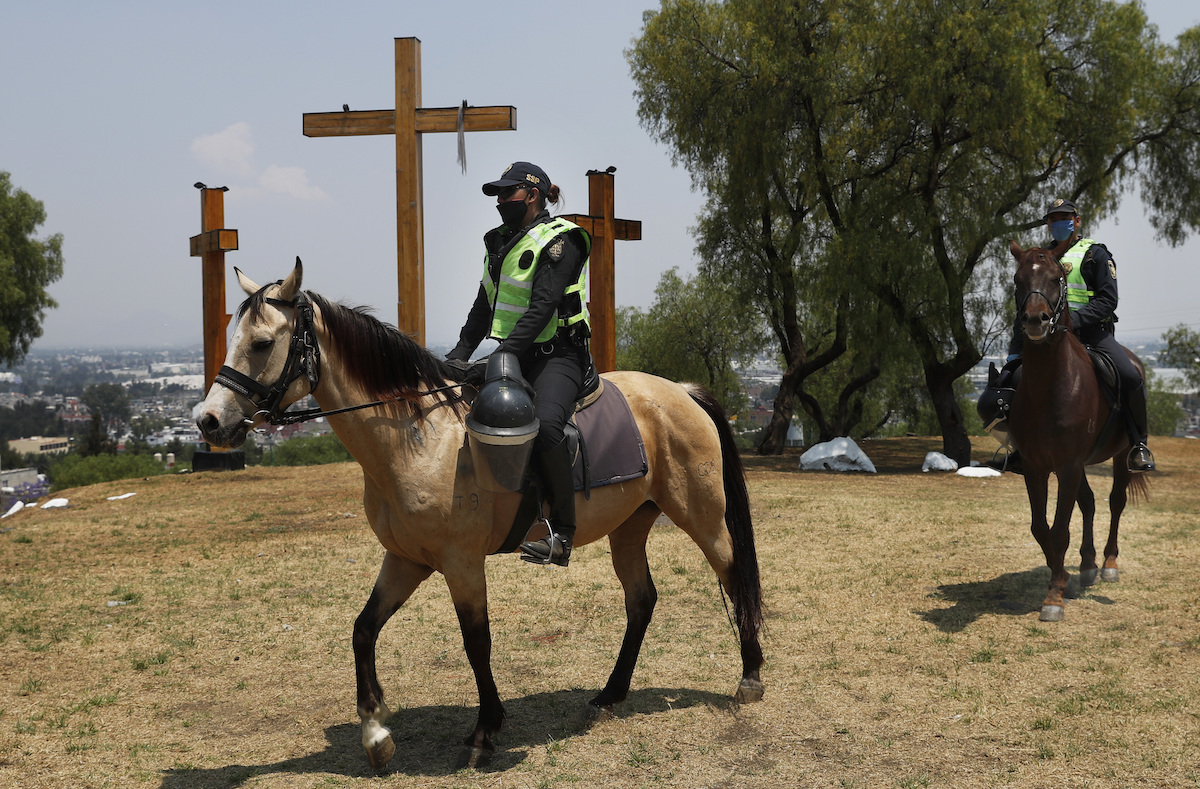 Mounted police guard the La Estrella hill where crosses are located for an annual Holy Week Via Crucis in Iztapalapa, Mexico City, Thursday, April 9, 2020. The area is closed and the police are preventing people from making to the area as a way to help slow down the spread of the new coronavirus. (AP Photo/Marco Ugarte)

But it is not just tourists who are barred; many indigenous Maya workers from Cancún returned to their home in the nearby Yucatan town of Kanxoc, given the downturn at the hotels in Cancún.

But residents complained that the nearby city of Valladolid blocked the road to Kanxoc with mounds of rubble and dirt to prevent them from entering.

The rights group Equipo Indigación said in a statement April 1 that “this measure is not only restrictive and a violation of human rights, given that it violates the right of free movement, it also violates the rights of the Maya people and implies racism.”

It said it could affect Kanxoc residents’ access to health care, given that most local services are in Valladolid.