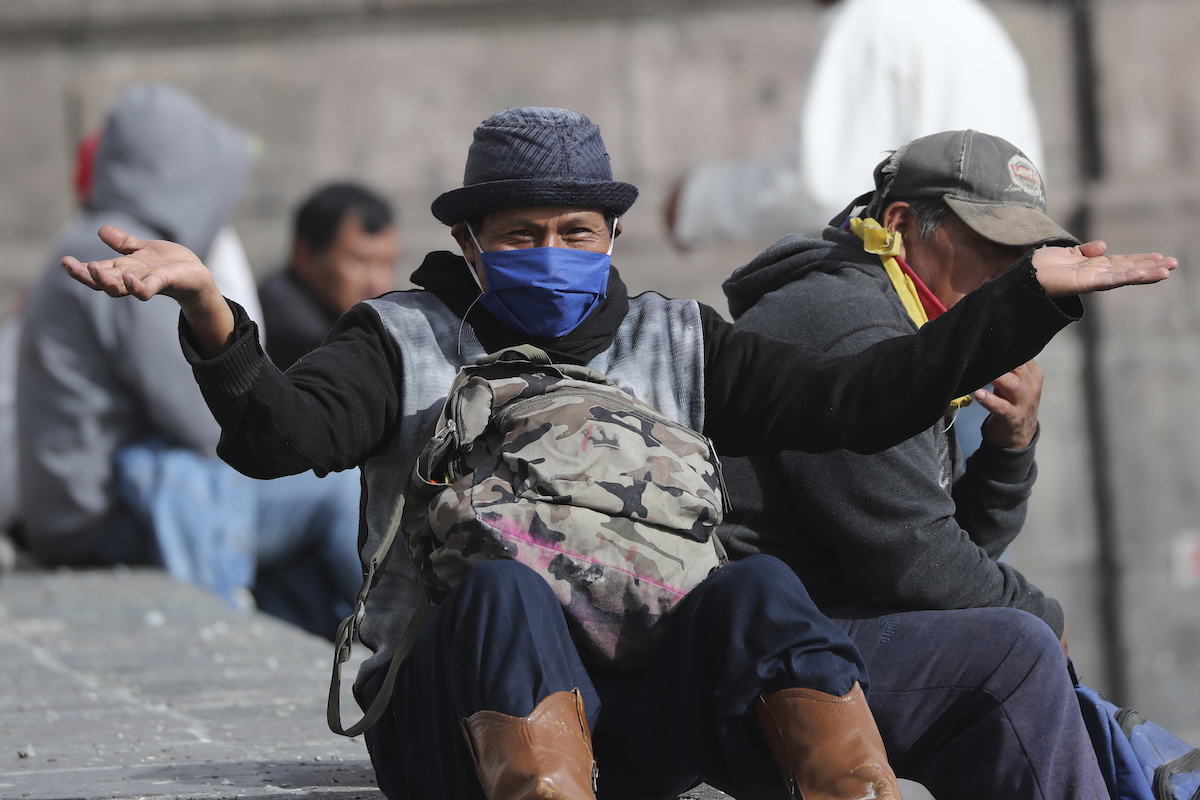 A man gestures to the camera as he rests in a public square in Quito, Ecuador, Friday, April 10, 2020. (AP Photo/Dolores Ochoa)

Moreno in a nationwide broadcast urged the nation to come together, saying that Ecuador’s massive foreign debt he inherited from past governments will have to be renegotiated, while large businesses earnings over $1 million annually will have to contribute 5% of their profits.

Drastic measures will also require residents who earn more than $500 monthly to pitch in, he said.

“This economic emergency is unprecedented in the recent history of this country,” Moreno said.

Ecuador, which largely depends on oil exports, was already buckling under $65 billion in foreign debt, when the coronavirus struck. In recent weeks images of the dead left in the streets flooded social media.

It’s been one of Latin America’s nations hardest hit by the virus, infecting 7,161 people and causing 297 deaths, taking its greatest toll on the port city of Guayaquil.

The situation turned worse on Monday, when dual pipelines transporting crude from deep within the Amazon broke as the Quijos River flooded, washing away a mountainside supporting the pipes.

The one owned by the state-run oil firm Transecuatoriano carries 360,000 barrels each day, while the one privately run by Oleoducto de Crudos Pesados sends 450,000 barrels daily of heavy crude.

Energy Minister René Ortiz said in an interview with the Teleamazonas television station on Friday that both damaged lines should be repaired within five weeks. He downplayed economic damage, adding that deals with foreign clients won’t be jeopardized, citing contracts that anticipate such unanticipated incidents.

Nearly 100 oil workers responded to the breaks, trying to stop spilled crude from polluting the Quijos River — whose rising waters caused the damage — and the downstream Coca River, officials said. The break happened 100 kilometers (62 miles) from the capital of Quito deep in the Amazon.

Officials have said there is no risk of fuel shortages within Ecuador due to ample storage. Also, the coronavirus has prompted the nation of 17 million to abide by a rigorous quarantine significantly cutting down traffic.

Adding to troubles of Ecuador’s production, a massive power failure Tuesday damaged the Esmeraldas refinery, the largest in the country.

“The parts that will have to be changed in the refinery aren’t readily available in the market, so that repair will take some time,” said Ortiz, without providing details.

Ecuador produces roughly 530,000 barrels of crude daily. Of that 60% is exported and the rest used domestically. Oil represents 35% of the country’s total exports, and it makes up one of the nation’s most important sources of income.

Moreno said he will also send a bill to the lawmakers asking them to make it harder for landlords to evict tenants unable to pay their rent and extending social security benefits for laid-off workers, among measures.