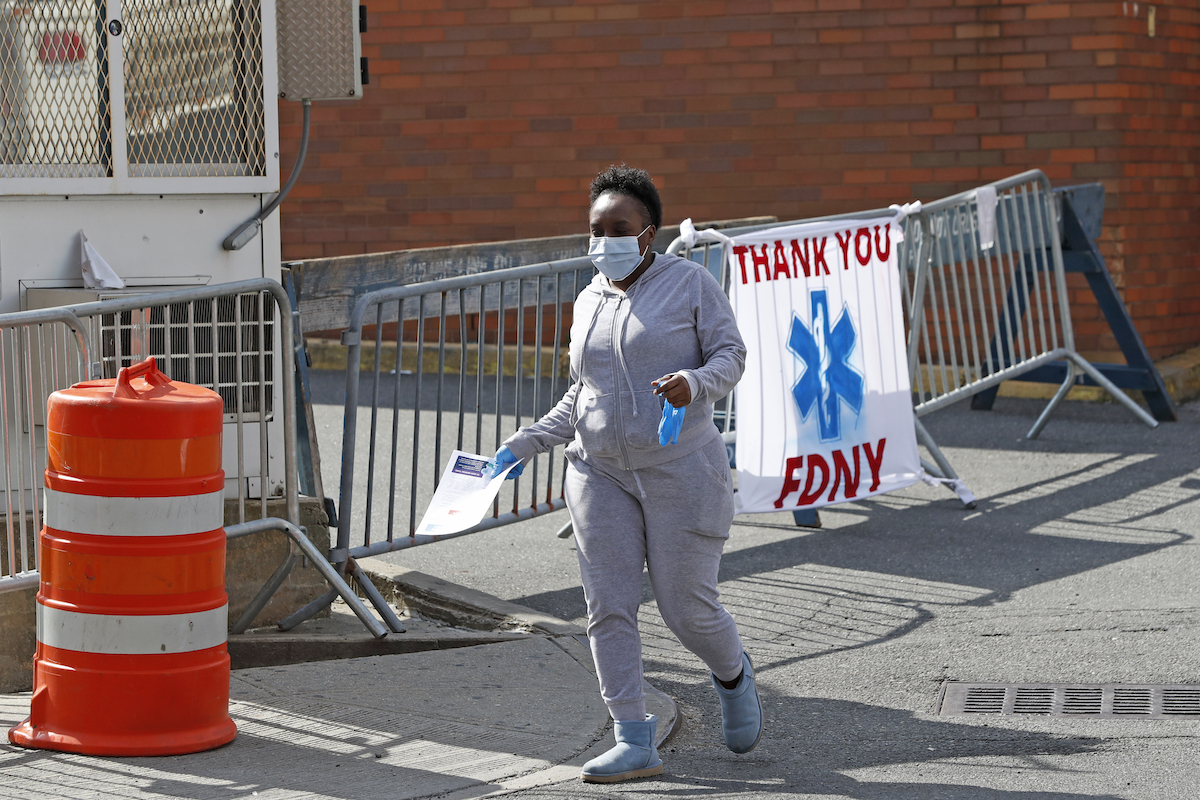 A woman leaves Elmhurst Hospital Center after being tested for COVID-19 or coronavirus during the current viral pandemic, Tuesday, April 7, 2020, in the Queens borough of New York. (AP Photo/Kathy Willens)

As the cases of COVID-19 continue to rise in New York City, it has become abundantly clear that the city’s poorest residents are the sacrificial lambs on the frontline of this pandemic. The latest data released by the city shows a harsh American reality—Blacks and Latinos in New York City are twice as likely to die of the virus as white people. This disparity proves the coronavirus is not the great equalizer; it’s a mirror where we see the real face of inequality and racism.

By the end of March, the coronavirus had killed more Americans than the 9/11 attacks. As of this writing, and the numbers will increase as the days wear on, COVID-19 has claimed the lives of over 25,000 Americans and 10,000 New Yorkers.

These numbers make it clear, the Bronx is a ticking time bomb. It is a frontline community on the brink of one of the most devastating public health crises in recent history, yet we have no answers on what procedures are being put in place to protect it. It’s shameful.

What’s worst is that for many Bronxites this is nothing new. To the Bronx, COVID-19 did not create disparities, it just exacerbated them.

The Bronx has always been a vulnerable community with some of the greatest economic inequalities in the nation. Policies formulated within the framework of racism lead to the economic, educational, housing, and health disparities that today have made places like the Bronx a hub for vulnerable communities. These same policies have perpetrated the systematic racism that today is killing the communities.

Sadly, many of our elected officials are standing by sidelines as we watch the Bronx become ground-zero for this pandemic.

This couldn’t be more apparent than it is in Bronx hospitals where the desperate cries of staff and medical personnel have been largely ignored. Additional ICU beds, personal protective equipment, and medical equipment —including testing kits and ventilators— are needed and while President Trump drags his feet to provide these resources, medical staff suffer the consequences. The needless death of former head nurse Freda Ocran in the Jacobi Medical Center was a clear example of this. For many healthcare workers, her death was the point of no return causing them to take their fight to the streets and protested the lack of supplies.

Our healthcare workers are putting their lives and the lives of their families on the line every day, but we still aren’t seeing a sufficient effort by our federal government to provide them with the equipment they need to keep themselves and others safe.

We need true reform that addresses the systemic inequalities and health care disparities that have been amplified by COVID-19. This is no time to propose or support cuts to Medicaid or programs like the Summer Youth Employment Program. Instead, we should focus on making sure healthcare is accessible and affordable to everyone regardless of their job status, income, geography, or preexisting medical conditions. We need clarity on how quickly we can expand capacity and how our city and state are going to alleviate the catastrophe that is headed towards the Bronx.

We are here today—with an escalating pandemic that is claiming the lives of New Yorkers each day. Where is the sense of urgency? The Bronx is now most susceptible to being ravaged, but the question is still on the table: Where is the plan for the Bronx?

The United States, more than any other “developed country,” has been brought to its knees by this virus. Americans are looking for answers yet the one man that should be providing us with answers is the one responsible for the catastrophic mishandling of this pandemic. His lack of leadership, urgency, and callous behavior has made one thing clear, he is more than willing to sacrifice the most vulnerable.

“I don’t take responsibility at all.” These words define his presidency and are the words that should be on every voter’s mind when they approach the voting booth in November.

Melissa Mark-Viverito is the former Speaker of the New York City Council and a candidate for Congress in New York’s 15th congressional district. She tweets from @MMViverito.