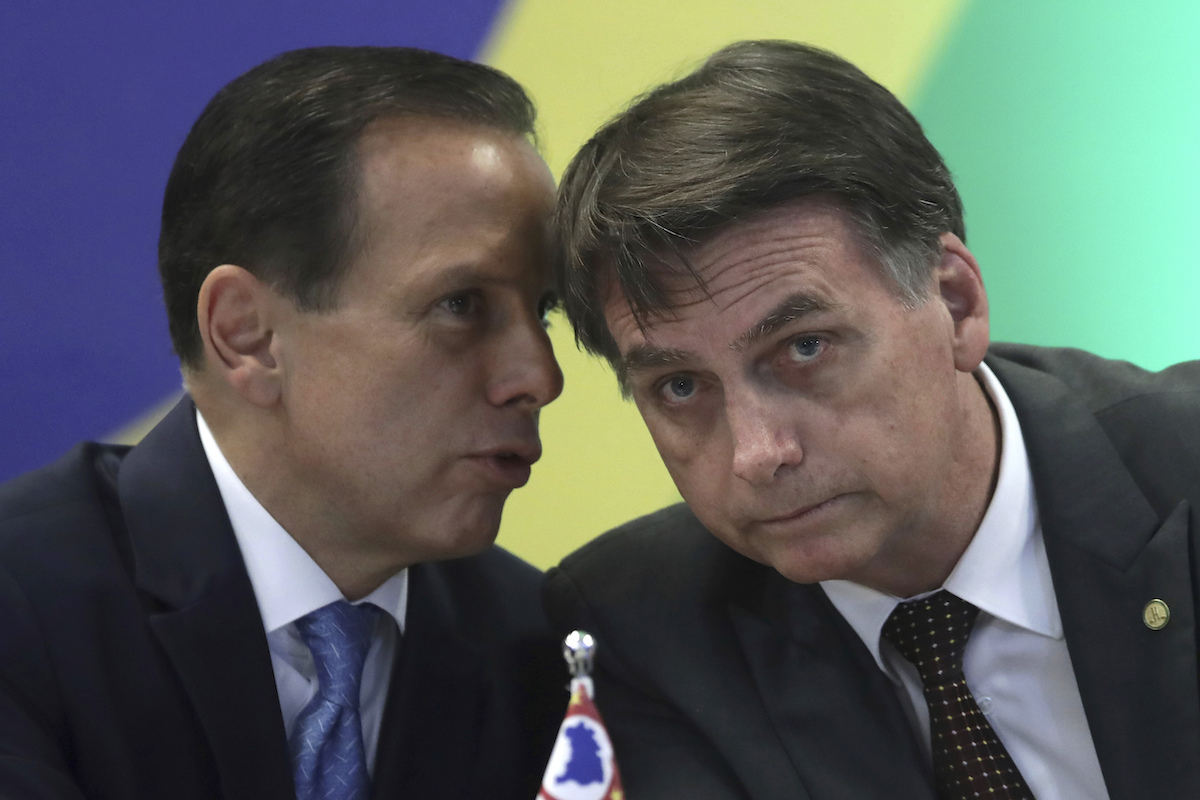 In this Nov. 14, 2018, file photo, Brazil’s President-elect Jair Bolsonaro, right, listens to São Paulo’s Governor-elect Joao Doria, during a meeting in Brasilia, Brazil. As governor, Doria has become one of the nation’s foremost advocates of strong restrictions on daily life to contain the virus, such as closing schools and restricting commerce and public transportation. That’s put him squarely in Bolsonaro’s line of fire. (AP Photo/Eraldo Peres, File)

SÃO PAULO (AP) — After a heated confrontation with Brazilian President Jair Bolsonaro last month over his lackadaisical approach to the coronavirus, governors in the South American country have since pulled back, wary of losing vital federal aid in the efforts to control COVID-19.

That strategy is no longer working for the leader of São Paulo, Brazil’s most populous state, the country’s economic engine and the epicenter of the nation’s virus outbreak. Gov. João Doria has made it clear he’s done biting his tongue.

“We’re fighting against the coronavirus and against the ‘Bolsonaro-virus,'” Doria said in an interview with The Associated Press on Wednesday, adding that he believes the president has adopted “incorrect, irresponsible positions.”

São Paulo has reported 11,000 confirmed cases of the coronavirus and almost 800 deaths, the highest in the country. As governor, Doria has become one of the nation’s foremost advocates of strong restrictions on daily life to contain the virus. 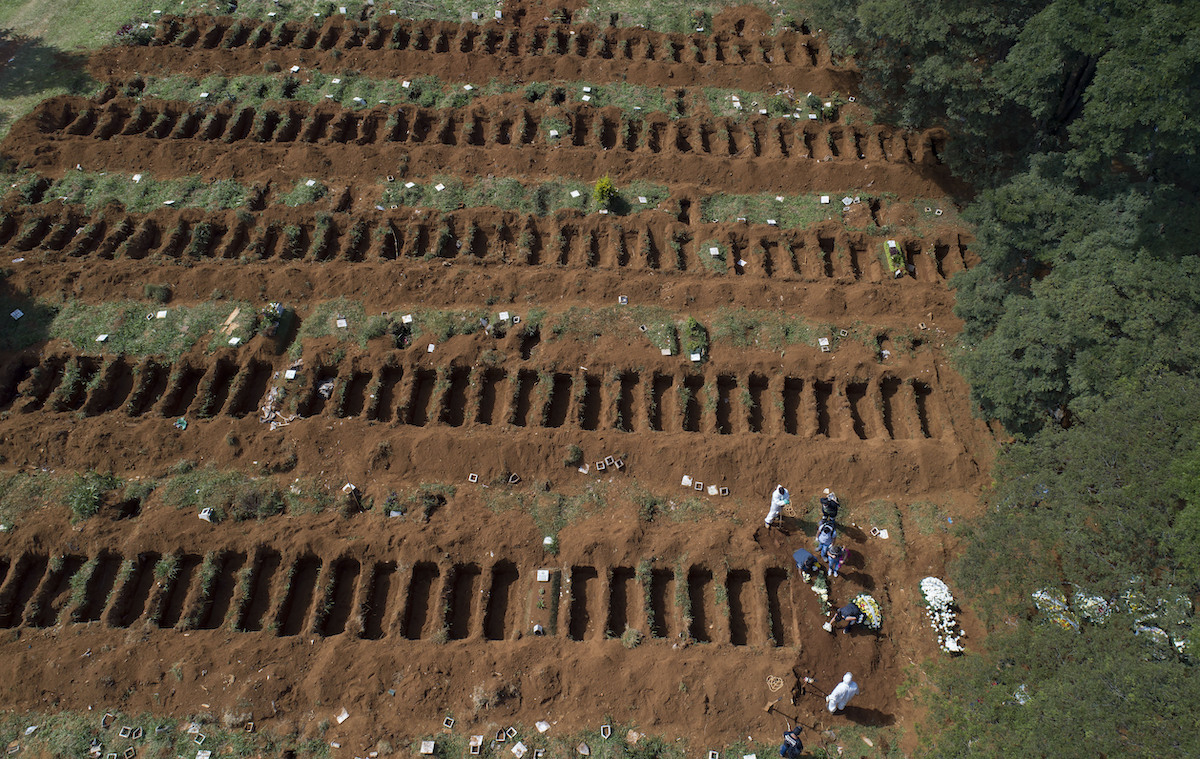 That has put him squarely in Bolsonaro’s line of fire. The president has argued that broad shutdown measures would wreck the economy. He is one of very few heads of state still scoffing at the virus, which he has repeatedly called “a little flu,” and he touts the yet-unproven benefits of an anti-malarial drug for treatment—echoes of his ally U.S. President Donald Trump.

While Trump’s skepticism has softened in recent weeks, even as he continues to clash with U.S. governors, Bolsonaro has doubled down.

The president has suggested a minimalist strategy of asking only those individuals who are most at risk for contracting the virus to be quarantined, not easily done in a country of extended families.

Nearly all of Brazil’s 27 governors have urged the public to self-quarantine while shutting down schools and businesses and suspending all but the most essential activities—more drastic measures in line with those taken by governments around the globe.

“Despite the negative instructions that people receive from the president, half the population (of Sao Paulo) has respected quarantine,” Doria said in a video call. “The population’s response has been good. It could have been better if we didn’t have to use science and medicine almost every day to confront guesswork.”

A survey by pollster Datafolha earlier this month showed three-quarters of Brazilians supported governors’ quarantine measures, regardless of the economic cost. Only one-third supported Bolsonaro’s handling of the crisis.

Doria is one of the strongest opponents to Bolsonaro’s handling of the virus, along with Health Minister Luiz Henrique Mandetta. But Mandetta’s job appears to be hanging by a thread.

“We have to confront the president and protect the population,” said the governor, who looked visibly fraught, despite his crisp suit and tie. 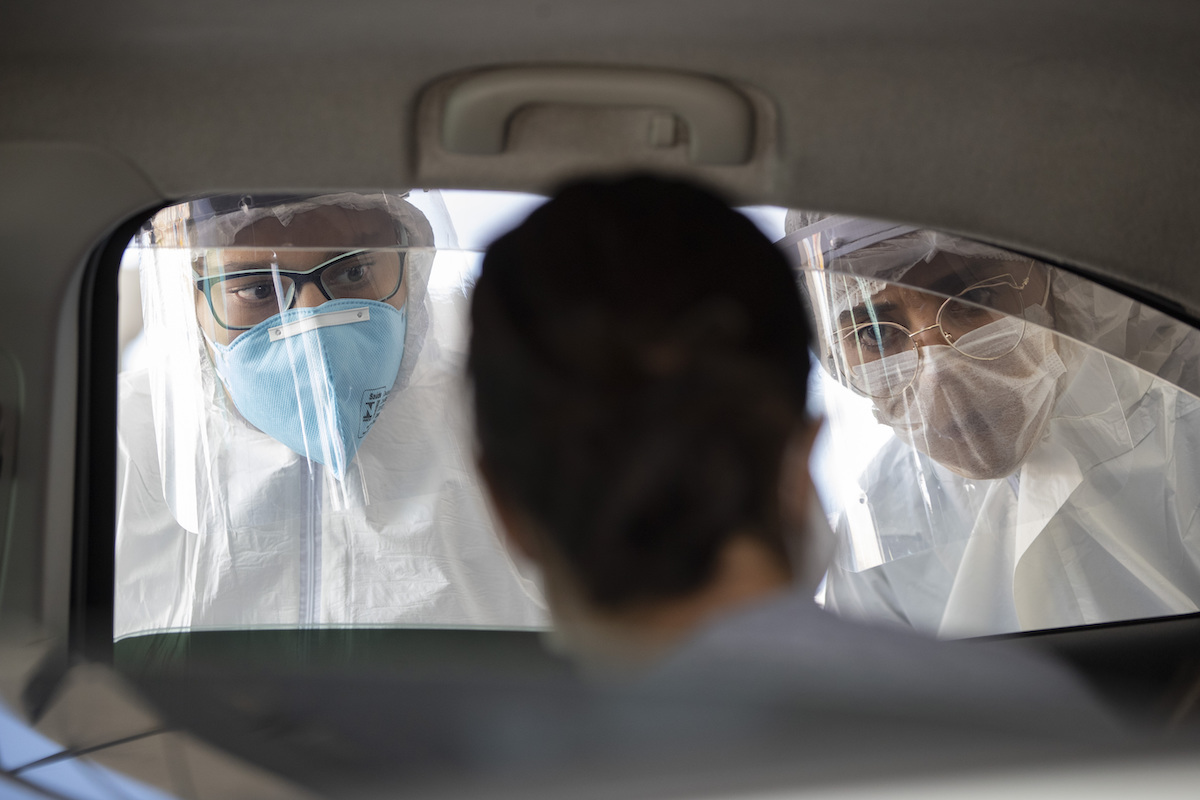 In this March 30, 2020, file photo, medical personnel check people inside their cars to find out if they have symptoms of COVID-19 in Guarulhos on the outskirts of São Paulo, Brazil. (AP Photo/Andre Penner)

Doria was once an ally of the president. A businessman who entered politics in 2016 and secured a shocking victory in Sao Paulo’s mayoral race, he campaigned for Bolsonaro in the second round of the 2018 presidential election. In the same general election, Doria earned Bolsonaro’s endorsement, and it helped him narrowly win the governorship.

Bolsonaro, a former Army captain, was a fringe lawmaker during his seven congressional terms, but popular support coalesced around his call for aggressive policing to combat high crime rates, his plans to impose conservative cultural values, and his promises to rejuvenate the economy.

The relationship between the two men soured, even before the pandemic, and Bolsonaro’s unscientific approach to the outbreak has deepened the rift even further. Doria is widely considered a potential challenger to Bolsonaro in the 2022 election.

In a March 25 conference call between the president and four governors, Doria told Bolsonaro that he had to set the example and lead the country rather than divide it, according to video leaked to the news media.

“If you don’t get in the way, Brazil will take off and emerge from the crisis,” Bolsonaro retorted. “Stop campaigning.”

Since that showdown, Doria had stayed tight-lipped about Bolsonaro, refraining from mentioning him directly. Bolsonaro, for his part, has said he disagrees with “certain governors” who he claims are using COVID-19 as an electoral launchpad.

Some of the president’s supporters are exercising less restraint. Doria said he is receiving daily threats and has had to increase security for his wife and send his children to live elsewhere.

Last weekend at a protest in downtown São Paulo, a Bolsonaro backer yelled over loudspeakers that he and others would go into Doria’s home, break everything, and that Doria himself was “going to die.”

Meanwhile, Bolsonaro’s recent calls for Brazilians to resume their normal lives have coincided with a dip in voluntary compliance with self-quarantine measures in São Paulo, according to cellphone data phone carriers have provided to the state.

Almost none of São Paulo’s cities have reached 70% isolation, which officials consider ideal to avoid a surge of cases that could overwhelm the health care system. The average rate of isolation for 104 municipalities was 52% on Tuesday. 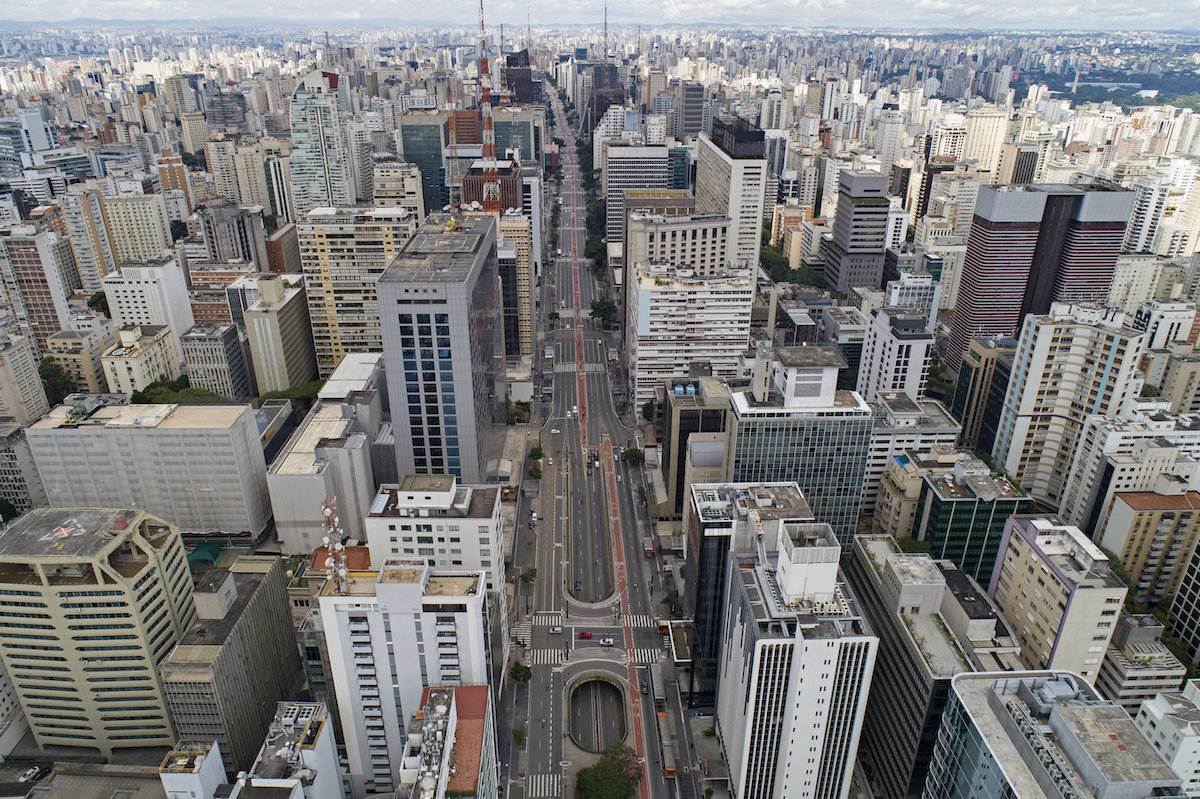 This March 24, 2020, file photo shows Paulista Avenue, on the city’s all important financial center, on the first day of quarantine to help stop the spread of the new coronavirus, in São Paulo, Brazil. (AP Photo/Andre Penner, File)

For most people, the new coronavirus causes mild or moderate symptoms. For some, especially older adults and people with existing health problems, it can cause more severe illness that requires hospitalization, sometimes for more than a week, and lead to death.

While pledging to speak out for the right course of action, Doria said he was dismayed that support for Bolsonaro’s approach extends beyond a radical base.

“Hearing and seeing people who are educated, who studied outside Brazil, defending what’s wrong and what’s extreme, that saddens me,” Doria said. “The confrontation isn’t with me. … It’s a confrontation with science and medicine of the entire world.”