COVID-19 in Ecuador: A Glimpse of a Tragedy That Is Yet to Fully Unfold in Latin America 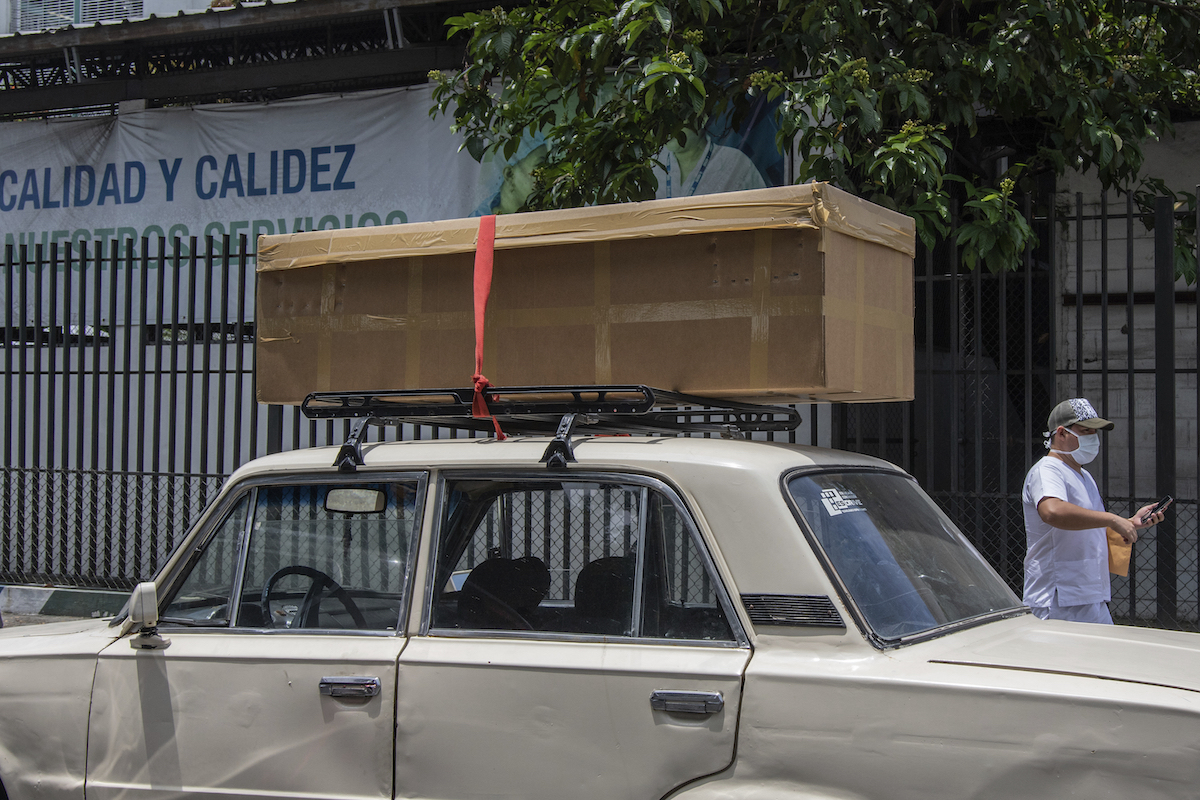 A cardboard coffin with a body sits on the roof rack of a car before it is taken away to be buried, outside the Teodoro Maldonado Hospital in Guayaquil, Ecuador, Monday, April 6, 2020. (AP Photo/Luis Pérez)

WASHINGTON, D.C. — Since the outbreak of the COVID-19 pandemic last December, it has been mostly middle- and high-income countries that bore the brunt of the affliction. Until now.

Slowly but terrifyingly, the impacts that the virus could and will have in developing countries is coming to light. And it is not clear how preventive measures designed for the rich world —frequent hand-washing, physical distancing, quarantines and testing, never mind access to health care—  will work in a world where 25 percent of the population lives in overcrowded, informal settlements or slums without access to water, sanitation and other basic services.

This is the case of Latin America, and specifically in Ecuador.

During recent weeks, we got a glimpse of what this could look like, as video footage of dead bodies piling up on the streets of Guayaquil, the southern port city of Ecuador, spread through our virtual worlds like this virus does in the real world. COVID-19 caught the city off guard, and the few treatment options available were squandered and wasted. Guayaquil was the region’s test case for what will happen when low government capacity meets political inertia, disbelief and ineptitude in the face of a pandemic that knows no mercy.

Guayaquil is a classic Latin American city: the country’s economic hub. It is a city of staggering social and economic inequalities, high levels of informality, meager public service provisions and limited government capacity. An estimated 15 percent of its 2.6 million inhabitants live on less than $56 dollars per month and 60 percent of residents are not registered in the social security system. Extreme poverty sits alongside gated communities and heavily-guarded private residential complexes—with maids, nannies, cooks and security guards incessantly traveling between the two extremes and merging these two disparate worlds.

The city registered one of the first cases of COVID-19 in Latin America. While authorities were distracted by monitoring incoming flights from Asia, it was an Ecuadorian migrant returning from Torrejón de Ardoz near Madrid who is considered as the oblivious carrier. With over 400,000 Ecuadorian migrants living in Spain, and traveling frequently back and forth, it is of course uncertain when the first case really arrived in Ecuador.

As is customary when a migrant relative arrives in Ecuador, they are greeted with parties and family reunions. In this case it was no different: after the visitor from Spain arrived on February 14, jubilant family gatherings were hosted by her family. A few days later, she was admitted to the hospital with symptoms of COVID-19. She died on March 13. Her sister died from respiratory failure a few days later.

As health authorities in Ecuador scrambled to trace everyone who was in contact with patient zero, Ecuador’s government succumbed in the face of the magnitude of the crisis. Some mayors feigned disbelief and called on people to continue on as usual. On March 2, after registering seven confirmed COVID-19 cases in the country, the government-appointed authority for the province of Guayas —where the Guayaquil is located— rallied people to attend a highly-awaited soccer match that brought thousands of sports fans together in a sardine-packed stadium. It would only be a matter of days now before videos of people collapsing and dying on the street would appear online.

Right now, Ecuador registers the highest number of fatalities in Latin America per millions of people. That is based on official government records of no more than 4,566 fatalities as of April 18. The mayor of Guayaquil, herself sick from the virus, affirms that there are over 600 deaths in her city alone.

Local newspapers are trying to count the number of cadavers left on the streets and sidewalks and arrived at as much as 450 bodies waiting to be picked up as of March 31. No one knows for sure how many more bodies are kept in people’s home.

It can easily seem pointless to argue about numbers in the face of such tragedy, but the government’s failed efforts do not end here: in the face of gruesome imagery coming out of Guayaquil, the government has opted to blame the outcry on a fake news campaign aimed at destabilizing it. The president’s personal secretary claimed that there is a systematic campaign underway to spread panic and ordered police arrests of those that spread fake imagery and mock photos of supposedly dead bodies.

As international media picked up on the horror unfolding in Guayaquil, ambassadors to Ecuador quickly moved to blame political opponents for orchestrating an international smear campaign.

At the same time, the mayor of Guayaquil —a former ally of the government­— cried out for humanitarian assistance and claimed that the city was abandoned and submerged in anguish.

As morgues in Guayaquil were overflowing, the municipality commissioned the distribution of paper cartons to hold the deceased. Although government officials continued to contradict the horror stories about the city that erupted in social media, the government finally appointed a task force to pick up the dead from the streets and hospitals.

Jorge Wated, the head of this task force, said that he is picking up an average of 150 cadavers per day from streets and homes in Guayaquil. On April 1, Wated, who is also the head of the state-owned development bank, had no choice than to go on national TV to acknowledge the crisis and apologize that the situation was dramatic in the streets of Guayaquil.

In an interview with an international media outlet on April 10, Wated said that he picked up more than 1,300 cadavers in seven days alone.

The region’s leaders are advised to watch closely how events unfold in this stricken port city. The President of El Salvador tweeted that if countries did not take timely measures, they could end up living the same nightmare as Guayaquil does.

Quick to respond, the President of Ecuador called on other leaders “not to believe the fake news that have obvious political intentionality.” He subsequently went on national TV and blamed the sick for leaving their homes and for not respecting the shelter in place orders. This, in a city where daily temperatures reach 90 degrees Fahrenheit, where almost half a million live in slums, and “shelter” is not what comes to mind when people think of their homes—grossly inadequate, overcrowded and precarious shacks that do not exceed 600 square feet, lack potable water and sewage and are no protection against the heat, humidity or the virus.

On March 21, Ecuador’s health minister resigned, claiming that she has not been given the resources needed to fight the pandemic and that it was impossible for her to even attempt to manage the health system that was about to collapse. The new health minister followed the government script to water down the crisis and claimed that Guayaquil’s health system had not collapsed—another staunch defender of the fake news campaign. When family members of health workers reported on social media that their relatives were dying, the health minister called out the medical personnel, claiming that the infections among health workers were due to community spread and not because they contracted the virus in hospitals. The Association of Medical Doctors of the Guayas province immediately released a statement asking the health minister to correct his remarks and confirmed that 45 percent of health workers have been infected they lacked protective gear in hospitals.

In the face of the national government’s gross negligence, local governments have had to step up. We see this in the United States, in Brazil and now in Ecuador. Before the country even registered its first case of COVID-19, the mayor of Quito, who is a medical doctor by training, consulted with scientists from local universities and decided to ban public gatherings and restrict mobility in Ecuador’s capital city.. Dr. Dámaris Intriago, a medical doctor who specializes in molecular medicine and teaches at a University in Quito participates on the mayor’s scientific task force. She said that response mechanisms in Quito were guided by scientists and public health policy experts. Quito’s officials are racing against the clock, trying to build temporary medical facilities, and supporting three university laboratories certified to run tests for COVID-19. Dr. Intriago added that she talks to colleagues in Guayaquil who have confirmed that all public hospital in the city have collapsed but that nobody knows what is really going on in the southern city.

Oxygen tanks ara the most valuable commodity in Guayaquil, costing up to $200 dollars on the black market. Family members of sick patients are seen carrying oxygen tanks in and out of hospitals, in desperate attempts to refill them and keep their loved ones alive. Local residents describe the smell of cadavers and dead bodies surrounding the public hospitals. It is not clear that the private hospitals have been spared.

The situation in Guayaquil is stark lesson to what could happen to the rest of Latin America if governments and regional leaders do not take the COVID-19 crisis seriously.

Luis Ortiz is the Director of VocesLatinoamericanas, a podcast on Latin American affairs. Follow him on Twitter @LuisOrtizDC.

3 responses to “COVID-19 in Ecuador: A Glimpse of a Tragedy That Is Yet to Fully Unfold in Latin America”