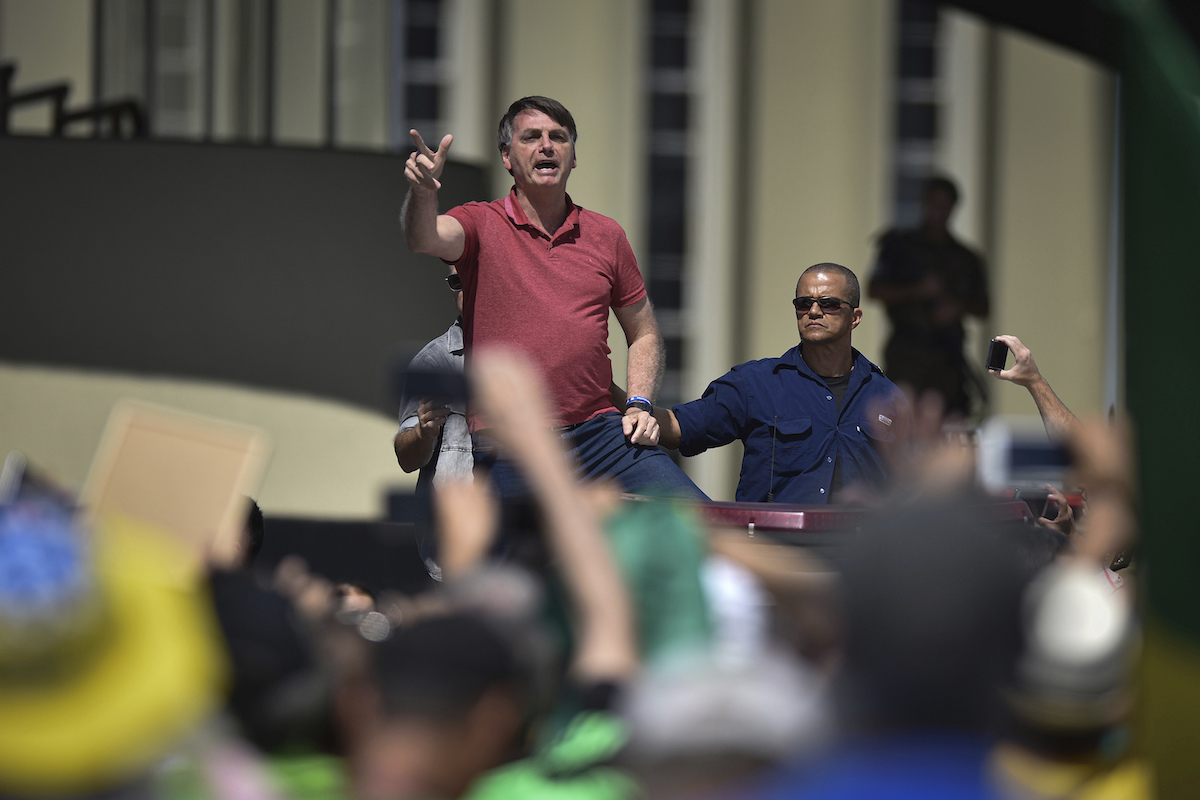 Brazil’s President Jair Bolsonaro speaks to supporters during a protest in front the army’s headquarters during the Army day, amid the new coronavirus pandemic, in Brasilia, Brazil, Sunday, April 19, 2020. Bolsonaro came out in support of a small protest Sunday that defended military intervention, infringing his own ministry’s recommendations to maintain social distancing and prompting fierce critics. (AP Photo/Andre Borges)

On the day Brazil celebrates its army, Bolsonaro made an appearance at the protest held in front of the army’s headquarters, in the capital city of Brasilia. There, dozens of tightly-packed protesters, many of whom were not wearing masks, were calling for the Supreme Court and Congress to be shut down.

“I am here because I believe in you. You are here because you believe in Brazil,” said Bolsonaro, a former army captain who waxes nostalgic for the country’s 1964-1985 dictatorship.

Since being sworn in on January 1 2019, Bolsonaro has asked the defense ministry to organize commemorations of the two decade-long military dictatorship, paid tribute to Gen. Alfredo Stroessner, the military strongman in neighboring Paraguay, and backed changes in schools’ history curriculum that would revise the way children are thought about the 1964 military coup.

But for some, Bolsonaro crossed a line Sunday.

“The president of the republic crossed the Rubicon,” wrote Felipe Santa Cruz, president of the Brazilian Bar Association, on his official Twitter account. “Time for Democrats to unite, to overcome difficulties and disagreements, in the name of a greater good called FREEDOM!”

“It is frightening to see demonstrations for the return of the military regime, after 30 years of democracy,” he wrote on Twitter.

Many Brazilians were also angered at Bolsonaro’s defiance of the stay-at-home measures introduced by several states governors. Bolsonaro has multiplied public appearances in recent weeks, meeting with supporters, protesters, passersby or business owners.