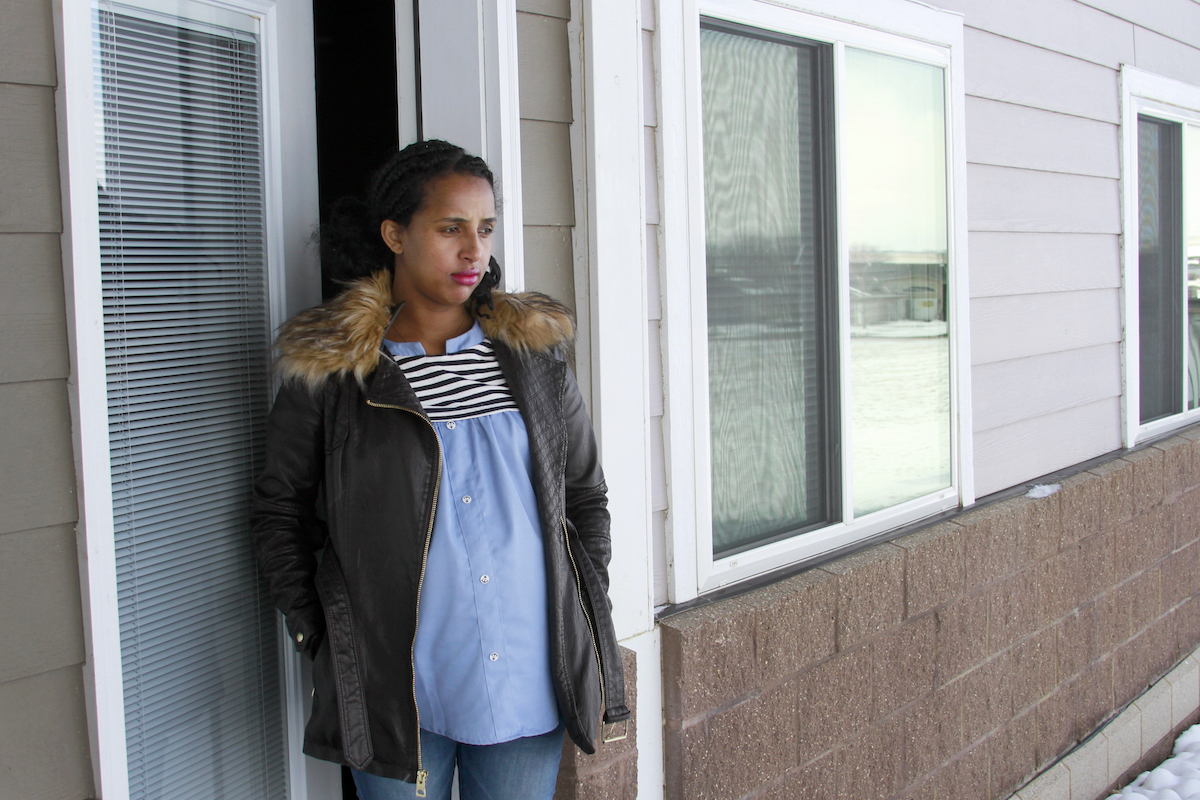 In this Monday, April 13, 2020, photo, Kulule Amosa steps out of the apartment she shares with her husband who works at the Smithfield pork processing plant in Sioux Falls, South Dakota. He tested positive for the coronavirus this week after an outbreak at the plant. (AP Photo/Stephen Groves)

SIOUX FALLS, S.D. (AP) — Kulule Amosa’s husband earns $17.70 an hour at a South Dakota pork plant doing a job so physically demanding it can only be performed in 30-minute increments. After each shift last week, he left exhausted as usual, but he didn’t want to go home.

He was scared he would infect his pregnant wife with the coronavirus—so much so that when he pulled into the parking lot of their apartment building, he would call Amosa to tell her he wasn’t coming inside. When he eventually did, he would sleep separately from her in their two-bedroom apartment.

This was no abstract worry: At the Smithfield Foods plant, the locker rooms were so tightly packed Amosa’s husband told her he sometimes had to push his way through a crowd. Coughs echoed through the bathrooms. The plant in Sioux Falls clocked so many cases that it was forced to close this week. It has reported 518 infections in employees and another 126 in people connected to them as of Wednesday, making it among the largest known clusters in the United States. A 64-year-old employee who contracted COVID-19 died Tuesday, according to his pastor.

The concentration of cases has highlighted the particular susceptibility of meat processing workers, who stand shoulder-to-shoulder on the line and congregate in crowded locker rooms and cafeterias. As many as half a dozen plants have shut because of outbreaks. Because the workers who slaughter and pack the nation’s meat are vulnerable, so, too, is the supply of that meat. Smithfield CEO Kenneth Sullivan said the closure of the plant, which produces roughly 5% of the U.S. pork supply each day, was “pushing our country perilously close to the edge in terms of our meat supply.”

Amosa and her husband, who are originally from Ethiopia, once saw working at the plant, where she also had a job until she became pregnant, as key to building their new life in the United States: It was well paid, union employment that gave them a community. But amid the coronavirus pandemic, the couple found themselves —like many workers whose jobs cannot be done remotely— exposed on two fronts: Both their health and their livelihoods were at risk. The couple agreed to speak to The Associated Press on the condition that Amosa’s husband not be named because he feared losing his job.

The plant is vital to a burgeoning immigrant community in Sioux Falls, offering opportunities for even those without a college degree or fluent English. Smithfield offers pay starting at over $15 an hour, health insurance and plenty of overtime. 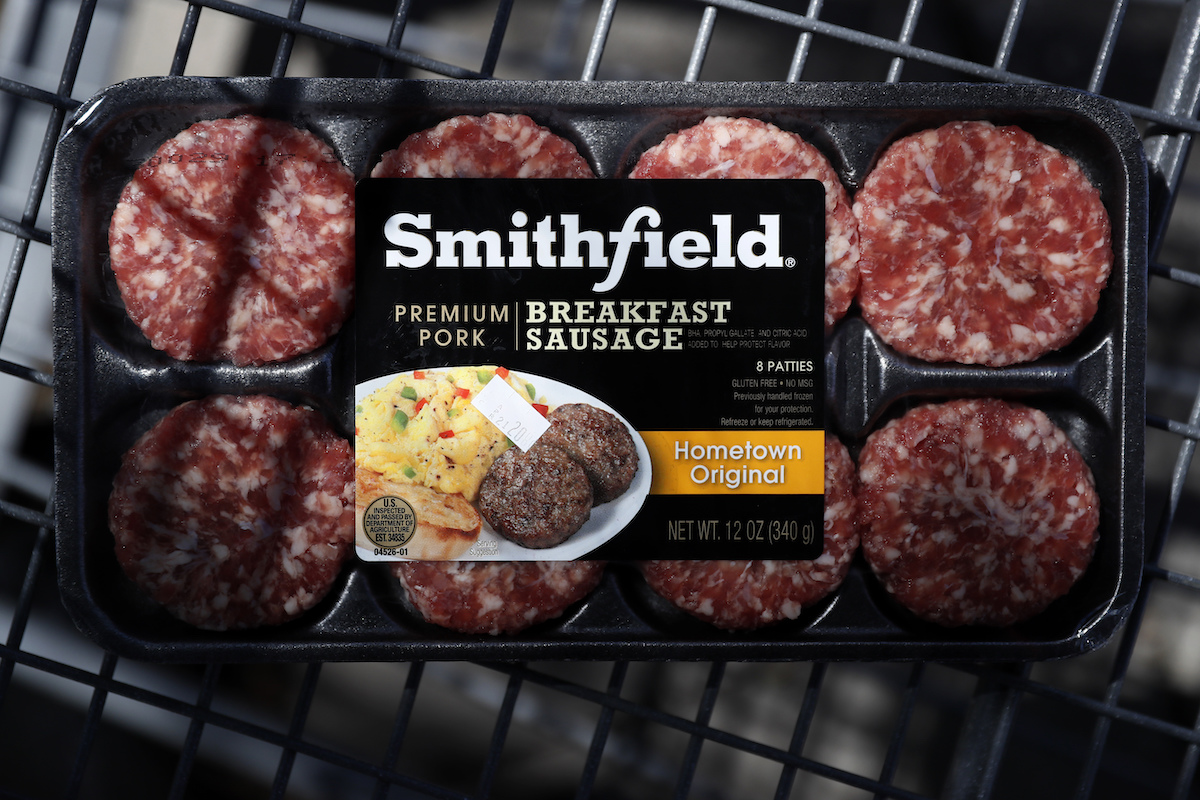 In this April 14, 2020, photo, a package of Smithfield Foods breakfast sausage sits in a shopping cart outside of a local grocery story, in Des Moines, Iowa. (AP Photo/Charlie Neibergall)

The plant has attracted a diversifying workforce to the city, where Somali and Vietnamese restaurants have joined diners and craft breweries. But the city remains fairly divided, with many immigrants living in neighborhoods near the plant, which employs 3,700 people in a city of about 180,000.

The outbreak at the plant has also presented a significant test to a governor who has resisted issuing sweeping stay-at-home orders. As Republican Gov. Kristi Noem was pressed again this week to impose tighter restrictions on Sioux Falls, her response instead was to announce that the state would give wide access to an anti-malarial drug championed by President Donald Trump as a promising treatment for COVID-19, but that has yet to be proven effective.

Noem has fired back, arguing that plant workers were deemed essential and would have been reporting for duty regardless.

For most people, the new coronavirus causes mild or moderate symptoms, but, for some, especially the elderly or infirm, it can cause severe illness and lead to death.

Even before the coronavirus began sickening workers, jobs in the meatpacking industry have been considered among the most dangerous in the U.S. Workers are exposed to a long list of dangers from hazardous chemicals to sharp knives. Just last month, a maintenance worker at a Tyson Fresh Meats plant in Kansas died after investigators say he got caught up in the assembly line belt.

The work is physical, starting with butchering hogs that weigh nearly 300 pounds (135 kilograms). On the processing line, repetitive-motion injuries are common. One worker at Smithfield described often waking up with his right hand so swollen he couldn’t make a fist.

Union leaders and immigrant advocates cheered the decision to close the plant indefinitely but wish more had been done sooner.

Smithfield spokeswoman Keira Lombardo said difficulty in getting masks and thermal scanners led to delays in implementing some safety measures when the plant was open. But she said last week the plant was adding extra hand-sanitizing stations, scanning employees’ temperatures before they entered and installing Plexiglas barriers in some areas.

Six current employees interviewed by the AP who, like Amosa’s husband, insisted on anonymity because they feared they would be fired described far more haphazard measures. They said they were given flimsy masks made of hairnet-like material, hand-washing stations were in disrepair, and there was pressure to keep working even if they felt sick.

One employee told his supervisor on March 30 that he had a fever the previous day, but he was told to report to work and not to tell anyone about the fever. He worked that day, missed the next two and returned when the fever broke, he said.

“No one asked if I went to the doctor, if I was tested,” the employee said. 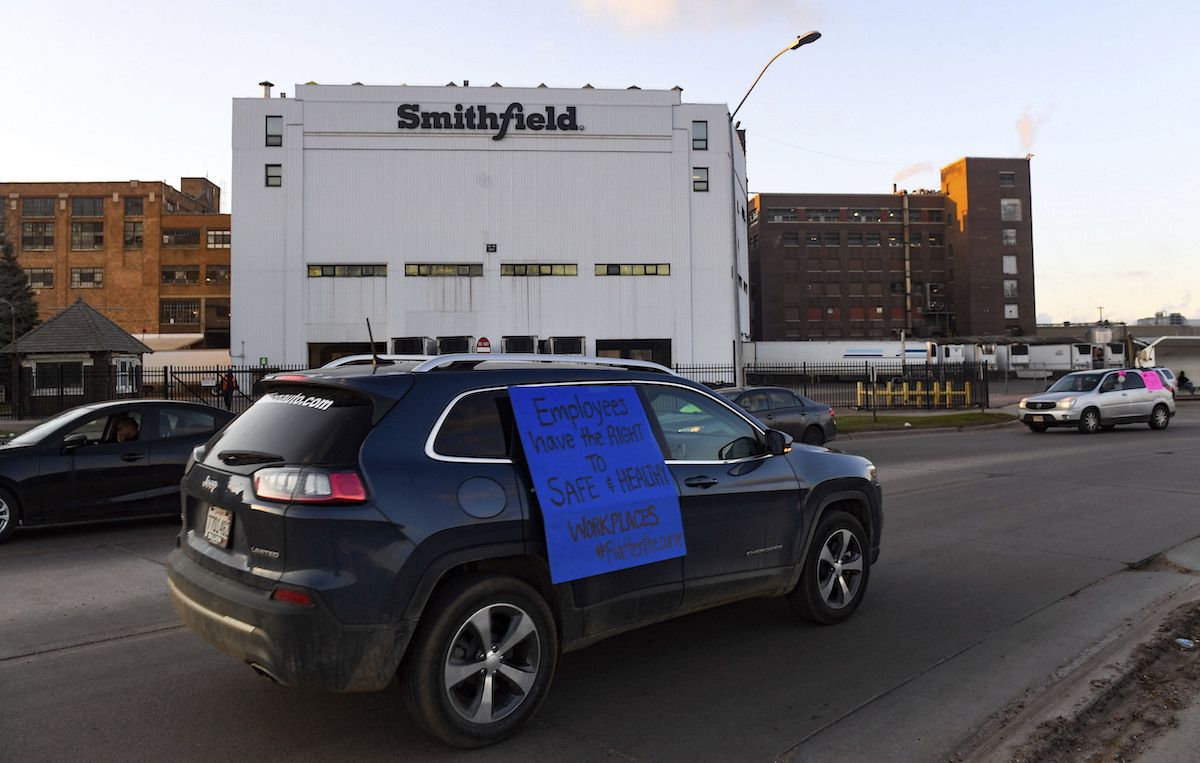 In this April 9, 2020, file photo, a car with a sign calling for a safe and healthy workplace drives past Smithfield Foods in Sioux Falls, S.D., during a protest on behalf of employees after many workers complained of unsafe working conditions due to the COVID-19 outbreak. (Erin Bormett/The Argus Leader via AP, File)

Lombardo said Smithfield “fully rejects any claims that employees were pressured to report to work,” calling it “completely counterproductive” to do so.

Smithfield has said it plans to clean the plant and implement more protections in the hopes of reopening. The Centers for Disease Prevention and Control sent a team to the plant this week to examine how it can be safely restarted.

But that may be difficult. Workers say they cannot fathom how butchering lines could be reconfigured to accommodate social distancing.

Meanwhile, Amosa and her husband are both home now, nervously awaiting their first child. But they also have a new worry: His coronavirus test came back positive Tuesday.