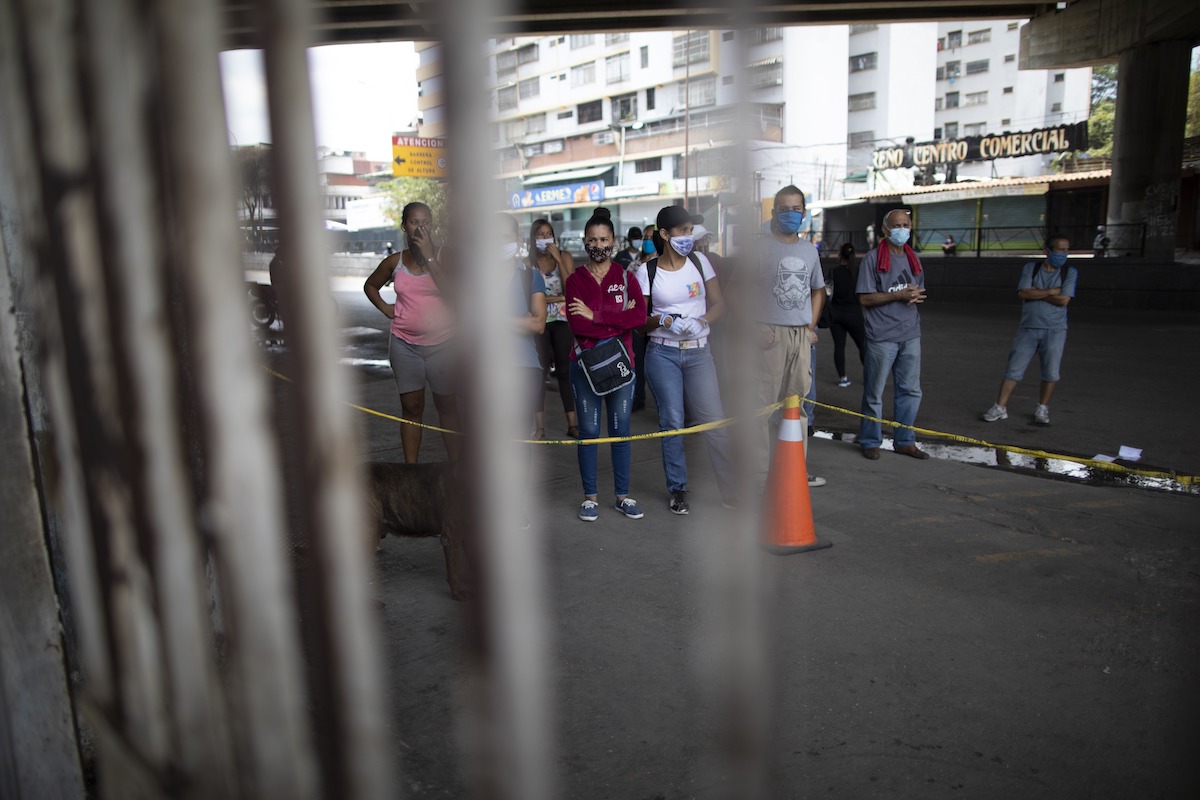 People wait to get into a tent for a free fast coronavirus test amid a quarantine to help stop the spread of COVID-19, at the entrance of a Hospital in Caracas, Venezuela, Wednesday, April 15, 2020. (AP Photo/Ariana Cubillos)

Like almost all countries at the moment, Venezuela is being impacted by COVID-19, with the official toll hitting 256 cases and nine deaths, as reported Sunday by Information Minister Jorge Rodríguez. However, the collapse of the health system, accusations from lack of transparency and repression by Nicolás Maduro’s government, and pressure from the United States government puts the country in an unpredictable situation.

The low numbers of Venezuela in contrast with its size and population —256 infected in a country of over 27 million— has raised questions about the veracity of the official toll. For most nations, the outbreak of COVID-19 has grown exponentially, while in Venezuela the curve has remained relatively flat from the get-go. Currently, the government claims about 25,000 tests are being process daily, all from a single lab in Caracas, but a piece by Reuters places the number to about 100 per day.

Some have praised the early measures of treatment and lockdown taken by Maduro’s government. However, other comments and policies put into question the government’s management of the outbreak. Most notably, Maduro’s backing of scientist Sirio Quintero.

Quintero’s research, which can be found fully on state media, claims that coronavirus is an “intracellular parasite” created by a U.S. military lab in the 1950’s that evolved from HIV and can be treated by drinking a beverage made with lemon, honey and lemongrass. Maduro has publicly promoted Quintero’s recipe, including on Twitter, which resulted on his tweets getting tagged as false information and getting deleted:

“Only three government officials provide information about the toll: Maduro, VP Delcy Rodríguez and her brother, the Information Minister,” said Ariadna, a Venezuelan journalist living in Caracas who asked Latino Rebels not to use her surname. “There are no press conferences where you can ask or any type of mechanism to address questions.”

Venezuela’s National College of Journalists reported that as of April 18, there were 18 journalists detained by law enforcement agencies since the start of the quarantine and 62 assault accusations on the press, mostly by members of National Guard. However, Ariadna noted, most concerning to her are the reprisals against against healthcare workers willing to openly talk to journalists. In one case, the Western state of Lara, a physician was detained for 24 hours by military intelligence for posting an anti-government message on WhatsApp.

“I agree with the quarantine, but I’m concerned to think this state of emergency might be used to violate people’s rights. Even if there are people who break the quarantine their rights must be respected and be fined within a legal frame,” Ariadna told Latino Rebels.

The first official cases of COVID-19 in the country were reported on March 13, the day after the World Health Organization declared it a global pandemic. On March 17, Maduro declared a nationwide “social” quarantine. Measures, which vary according to state and in some cases by municipality, have included mandatory mask use, mid-afternoon curfews, suspension of classes and most activities, and restrictions on mobilization in some communities.

Jesús Guevara is a college professor from Maracay, two hours west of Caracas. He has been trying to adapt by teaching online classes, but problems with infrastructure makes it impossible to keep a routine.

“Not everyone has enough power or an internet connection, so we have been managing with writing pieces. To be honest, it’s pretty gray and dispiriting,” he told Latino Rebels

Guevara admits that he finds the quarantine regulations confusing. “I don’t know what the police will do if they stop me.” He only goes once a week to get groceries, but this has also become difficult due to the gasoline shortage currently affecting Venezuela.

“I can’t move outside my neighborhood, even if I wanted to,” he added. Most gas stations remain closed, and those working remain under military control. 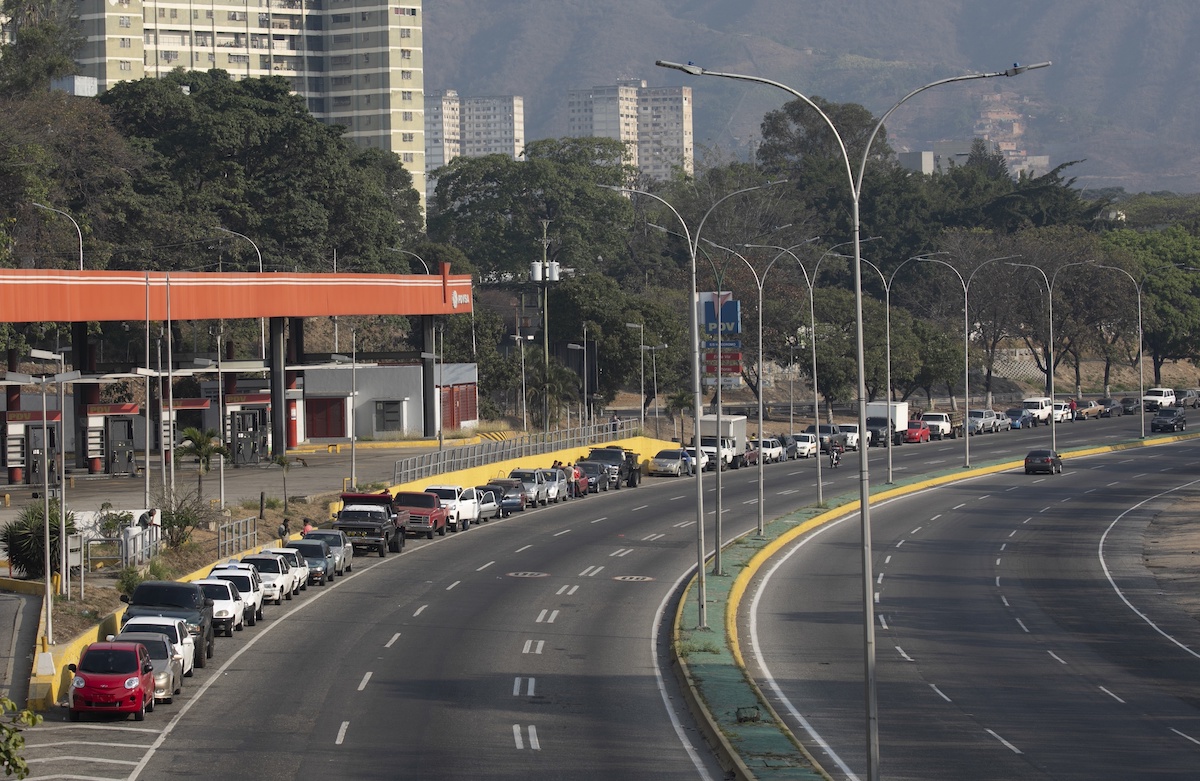 A long line of motorists wait to fill up with gasoline in Caracas, Venezuela, Thursday, April 2, 2020. (AP Photo/Ariana Cubillos)

Currently, the country’s refineries are inoperative, mostly due to lack of maintenance.  Sanctions set last year by the Trump administration have also limited the number of companies willing to do business with PDVSA, Venezuela’s state-owned oil company, including its capacity to import gasoline. The U.S. and 50 other countries don’t recognize Maduro as legitimate president and consider Juan Guaidó, Speaker of the National Assembly, the country’s actual president.

The U.S. Department of Justice recently charged Maduro and 14 current or former members of the country’s government for narco-terrorism and other drug-related crimes. Washington has proposed, with the European Union’s blessing, a 13-point government transition framework for the country while strengthening the navy presence in the Caribbean. Eleven U.S. senators have signed a letter to State Secretary Mike Pompeo to temporarily suspend sanctions due to the COVID-19 outbreak.

Meanwhile, Guaidó has announced a monthly $100 bonus to Venezuela’s healthcare workers. The money would be paid via a digital wallet as part of a system developed with the assistance of the Organization of American States. Guaidó, who has not said when these payments should be expected, has stated that the money come from funds previously held by Maduro’s government.

“The dictatorship has kidnapped billions of dollars… and with less than 0.01% we’ll be able to do much more,” he declared.