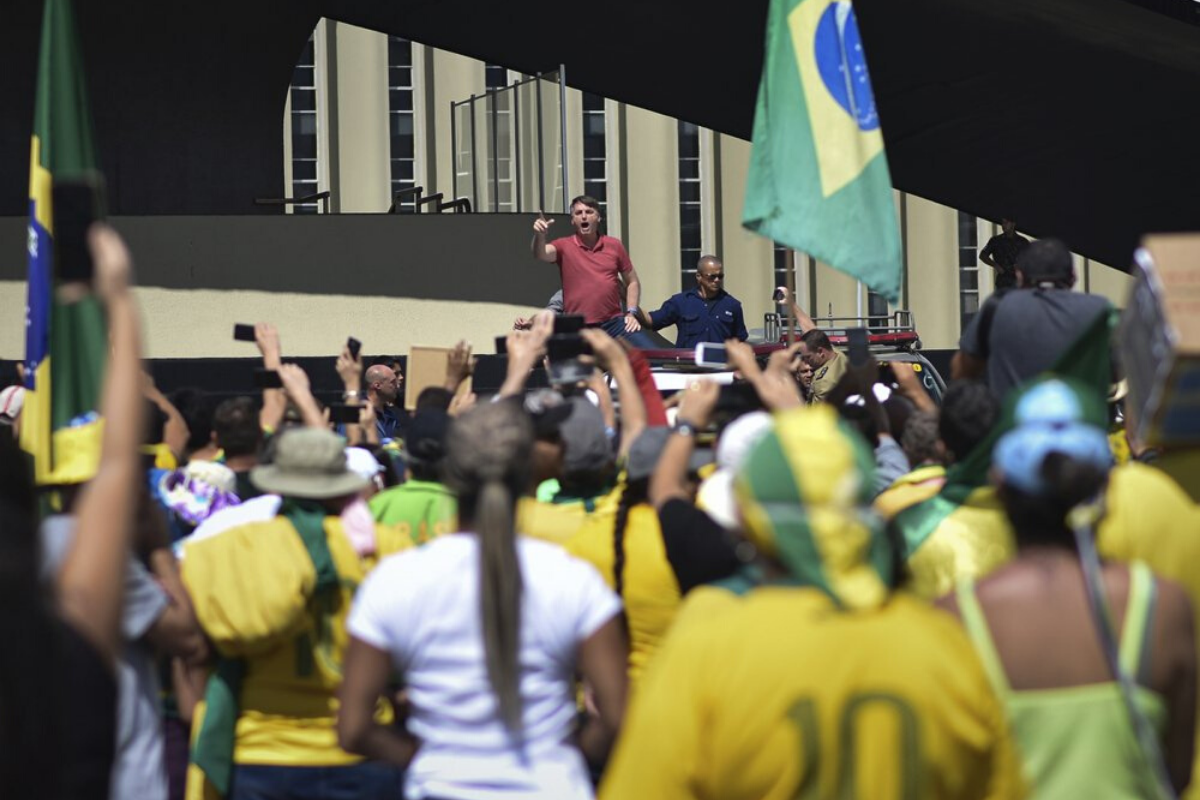 Brazil’s President Jair Bolsonaro, center, speaks to supporters during a protest in front the army’s headquarters during the Army day, amid the new coronavirus pandemic, in Brasilia, Brazil, Sunday, April 19, 2020. (AP Photo/Andre Borges)

SÃO PAULO (AP) — Four days after firing his health minister amid the coronavirus pandemic, Brazilian President Jair Bolsonaro said Monday he wants social isolation policies to end nationwide this week despite commitments by many states to maintain such policies.

Nearly all Brazilian states have stay-at-home measures in place, some slated to extend until the middle of May. The country’s top court has already ruled governors and mayors can decide on social isolation measures regardless of the federal government’s position. Bolsonaro, meanwhile, wants a quick reopening to stop the deterioration of Brazil’s faltering economy.

“Everything done in excess ends up bringing problems. These measures did not reach their goal in some states,” Bolsonaro told journalists in front of the presidential residence in Brasilia. “I hope this is the last week of this quarantine, of this way of fighting the virus.”

The Brazilian president favors a less restrictive model in which only those in high-risk groups would be quarantined at home until the end of the outbreak.

After Bolsonaro replaced critic Luiz Henrique Mandetta with Nelson Teich as health minister, several governors and mayors said they were considering even stricter isolation measures in an effort to curb the spread of the new coronavirus.

Teich previously published an article defending quarantine policies, but he has not spoken to the press since a vague introduction speech on Friday and it is unclear what he will do on the job.

On Monday evening, Brazil’s health ministry shared a video in which Teich says there will be “a progressive, structured and planned exit from social isolation.” He also promised to raise the country’s capacity of testing from promised 24 million in the next weeks to up to 46 million.

Brazil confirmed 113 deaths of COVID-19 in the last 24 hours, putting the country’s total at 2,575. More than 40,000 people have contracted the disease in the South American nation, the highest figure in Latin America.

Bolsonaro’s comments came one day after he met outdoors with dozens of supporters who want the closing of the country’s congress and supreme court. His presence in such demonstration is drawing widespread repudiation in a nation that endured a military dictatorship between 1964 and 1985.

The Brazilian president denied he was attacking the country’s democracy at the protest, but said: “I am actually the constitution.”