US Pressures Mexico to Reopen Plants Amid Worker Walkouts 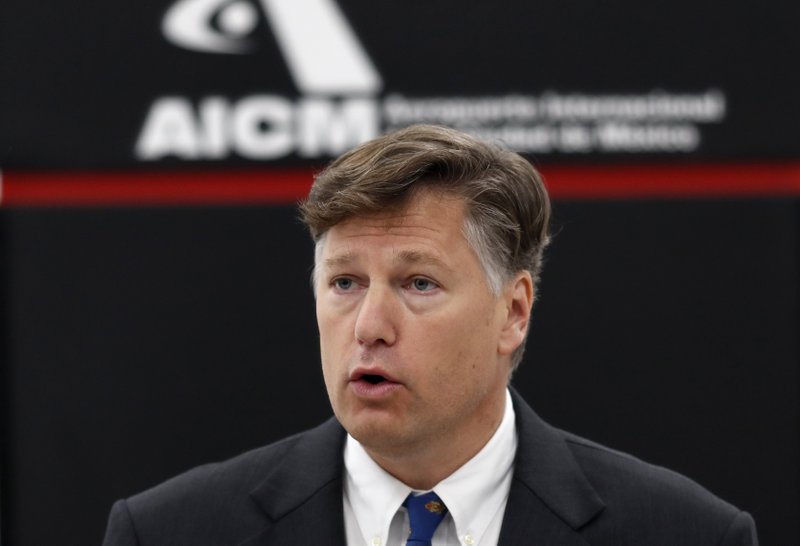 In this Aug. 16, 2019 file photo, Christopher Landau, the new U.S. ambassador to Mexico, delivers a statement to members of the media at the Benito Juárez International Airport, upon his arrival to Mexico City. (AP Photo/Eduardo Verdugo, File)

MEXICO CITY (AP) — The U.S. pressed Mexico on Tuesday to reopen border assembly plants that are key to the U.S. supply chain, including defense contractors, as more employees staged walkouts and protests at the facilities because of fears over the coronavirus.

He expressed concern about virus lockdowns damaging the flow of parts and goods that feed businesses in the three nations of the North American free trade zone —United States, Mexico and Canada— and warned that “if we do not coordinate our response, these chains can evaporate.”

“There are risks everywhere, but we don’t all stay at home for fear we are going to get in a car accident,” Landau wrote. “The destruction of the economy is also a health threat.”

“We are seeing impacts on the industrial base by several pockets of closure internationally. Particularly of note is Mexico, where we have a group of companies that are impacting many of our major primes,” she said.

Lord, who mentioned the importance of Mexican border plants in U.S. airframe production, said she planned to talk with Mexican Foreign Minister Marcelo Ebrard on Tuesday to ask for help to reopen international suppliers there. Mexico’s Foreign Relations Department declined to confirm whether that discussion had occurred.

But Mexico’s Economy Department later wrote that the two governments “are holding conversations to protect the health of their citizens and, at the same time, protect the productive integration of their economies.” It gave no further details of those talks.

The effort came as even more employees staged walkouts and protests at border assembly plants, which are known as maquiladoras, because of fears the facilities have become breeding grounds for coronavirus outbreaks. The latest protests came at Electro Componentes de Mexico plants in Ciudad Juárez, across the border from El Paso, Texas.

“This was a work stoppage,” said Susana Prieto, a long-time labor lawyer and organizer in Ciudad Juarez. She posted photos of dozens of employees demonstrating at a company parking lot, many wearing masks.

She said dozens of maquiladora workers are infected with the virus and some have died, including 16 employees at plants run by automotive seat maker Lear Corp.

Lear has acknowledged there have been coronavirus deaths among its 24,000 employees in Ciudad Juárez, but won’t say how many.

The company adds that its 10 plants in the city “are all currently closed and will remain closed until we have a plan that is supported by our workers and they feel safe returning to work.”

Prieto said she believed there had been three deaths at the several Electro Componentes plants in Ciudad Juárez, but the company could not be reached to confirm that.

The struggle at the maquiladora plants is twofold. At first, many of the plants refused to shut down in line with government orders closing “nonessential” businesses. Now, Prieto says, many firms want to send workers home on two-week furloughs at half pay, which in many cases could amount to less than $30 a week.

The government of Chihuahua state, where Ciudad Juárez is located, said that “the maquiladora industry should not be stigmatized” amid the pandemic.

It said dozens of plants have shut down and 180,000 of the city’s 300,000 industrial workers had been idled. Underlining the complexities of the situation, it said 33 plants deemed “essential” continued to operate fully and 35 were operating partially.

The state government also noted that 28 plants not considered essential had refused to shut down and said that officials were visiting them to demand they close.

Mexico currently has about 9,500 confirmed coronavirus cases and 857 deaths.