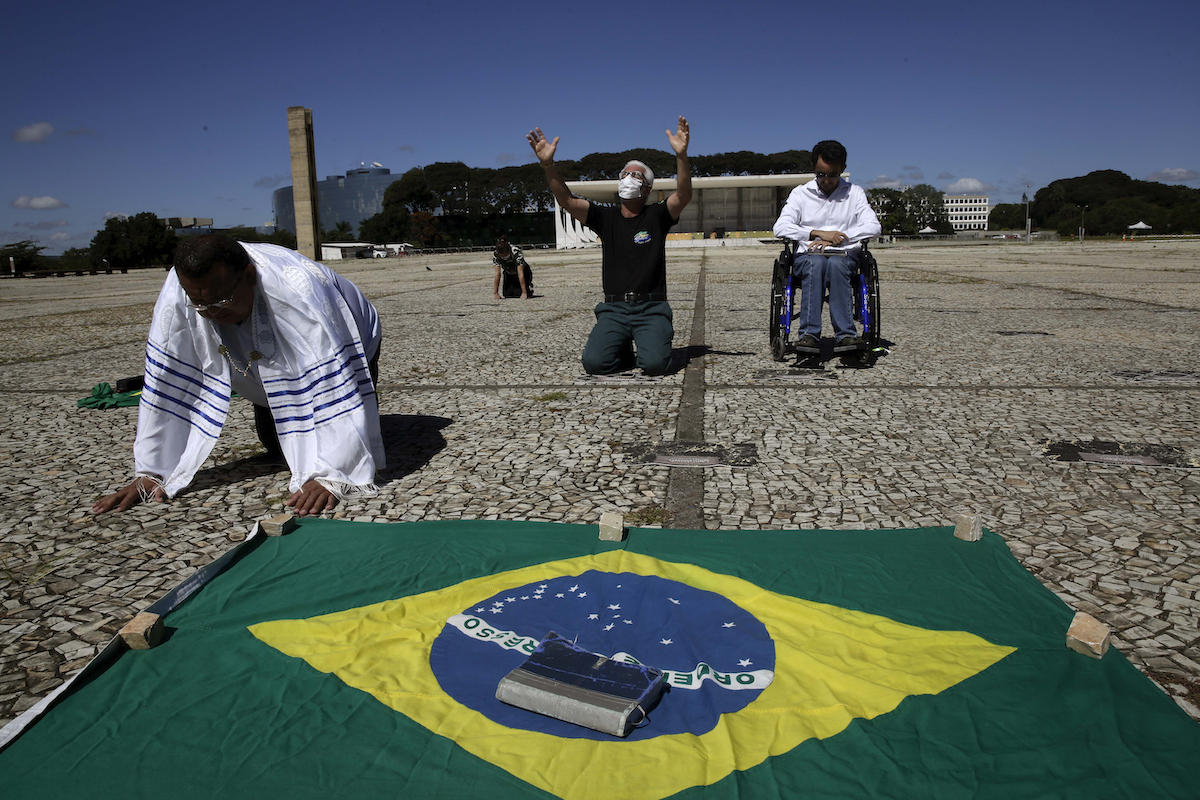 RIO DE JANEIRO (AP) — As Brazil careens toward a full-blown public health emergency and economic meltdown, President Jair Bolsonaro has managed to add a third ingredient to the toxic mix: political crisis. Even if it doesn’t speed his downfall, it will render Brazilians more vulnerable to the pandemic.

Bolsonaro’s decision last week to replace the federal police chief —and cross his popular justice minister, Sérgio Moro, who quit and alleged impropriety— has sparked an investigation into the president’s actions that will be conducted by the federal police itself. Already the scandal threatens to supplant coronavirus as the day’s most urgent matter.

“He is dividing the attention of the government and of society, and draining efforts and energy that, in such a grave moment of pandemic, should be exclusively concentrated on efforts to fight COVID-19,” said Paulo Calmon, a professor of political science at the University of Brasilia.

During the announcement of his resignation Friday, Moro said Bolsonaro told him on multiple occasions that he wanted to replace the federal police chief with someone who would give him access to police investigations, some of which reportedly target one or more of the president’s sons. That pitched the administration into turmoil and prompted Bolsonaro’s own prosecutor-general to call for a Supreme Court investigation. Irate Brazilians observing government stay-at-home recommendations because of the virus banged pots and pans from their windows in protest.

“The President of the Republic —who is also subject to the laws, like any other citizen of this country— is not exonerated from criminal liability stemming from his acts,” Mello wrote in his decision, which was published on the Supreme Court’s website.

The criminal probe and Moro’s resignation threaten to weaken Bolsonaro’s standing at a time when he already has come under fire for opposition to state efforts to control the rapidly spreading coronavirus. More than 71,000 Brazilians have been infected and more than 5,000 have died – vast under-counts according to experts who point to the country’s widespread lack of testing. Bolsonaro also tossed his popular health minister, Luiz Henrique Mandetta, who had supported confinement measures put in place by state governors. 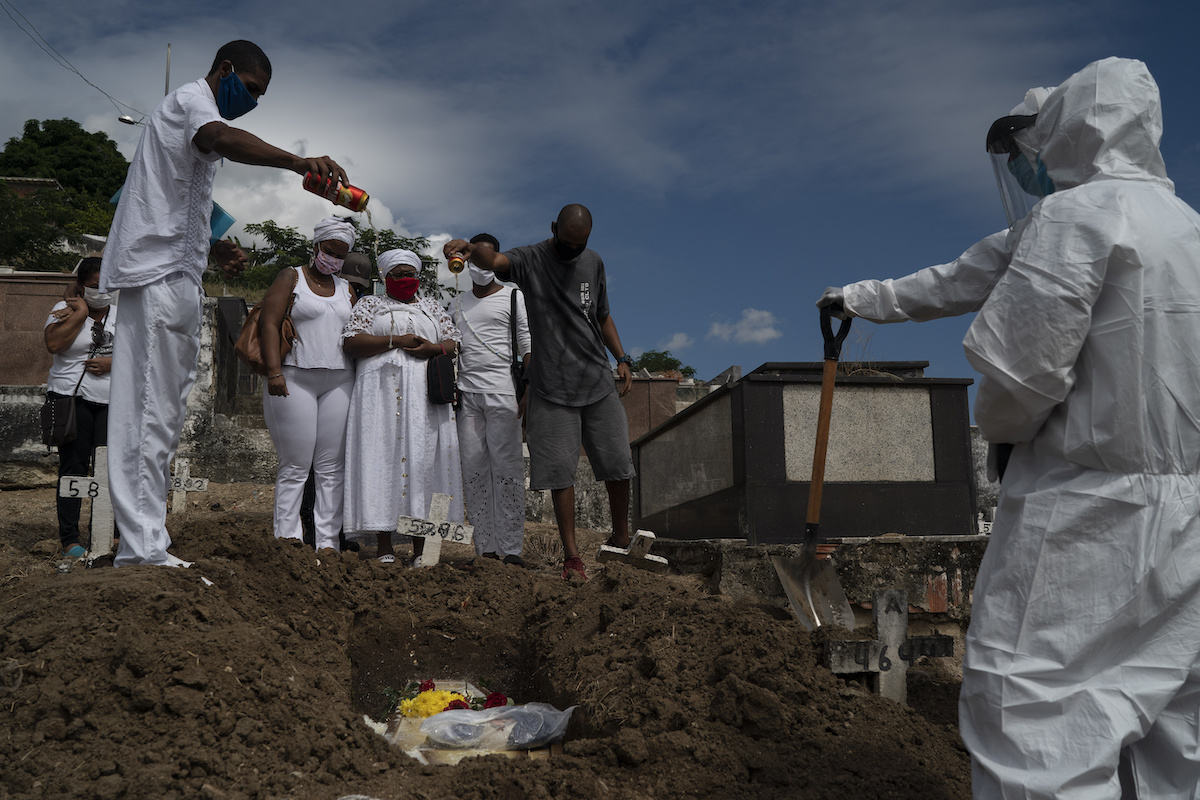 Friends pour beer on the coffin that contain the remains of Ana Maria, a 56-year-old nursing assistant who died from the new coronavirus, in Rio de Janeiro, Brazil, Tuesday, April 28, 2020. (AP Photo/Leo Correa)

Margareth Dalcolmo, a clinical researcher and professor of respiratory medicine at the state-funded Oswaldo Cruz Foundation in Rio, said that “ambivalence” and inconsistencies by Bolsonaro’s administration have paved the way for “the biggest humanitarian tragedy we’ve ever seen in Brazil.”

“We are running against time in a chaotic way,” Dalcolmo told an online panel Tuesday sponsored by the Washington-based Wilson Center. “We should have learned more from the countries that preceded us and we didn’t.”

Bolsonaro has called COVID-19 “a little flu” and said sweeping state measures that have closed down all but essential businesses will cause economic damage far worse than allowing the disease to spread while isolating only high-risk Brazilians, such as the elderly and those with health problems. Bolsonaro’s newly named Health Minister Nelson Teich, in his first address to the nation, declared himself “completely aligned” with the president, adding that “health and the economy are complementary.”

The International Monetary Fund this month forecast Brazil’s GDP will plunge 5.3% in 2020. That would be the deepest single-year tumble since at least 1901, when national accounts data from the government’s economics institute began. Brazil contracted 2% in 1918, the year of the Spanish flu pandemic, according to the institute.

The exits of Mandetta and Moro have laid bare the divides within Bolsonaro’s administration, in addition to rifts between him and the governors, and with the legislature, Calmon said.

“These divisions further weaken the government’s response capacity, especially in the health system that was already considerably battered by the economic crisis,” he said.

Pollster Datafolha on Monday found the percentage of people surveyed who grade Bolsonaro’s handling of the coronavirus as bad or terrible has risen to 45% from 33% in March, while approval fell to 27%.

In addition, 45% of respondents supported an impeachment process against the president, and 46% backed his resignation, up from 37% at the start of the month, according to the poll, which had a margin of error of plus or minus three percentage points. 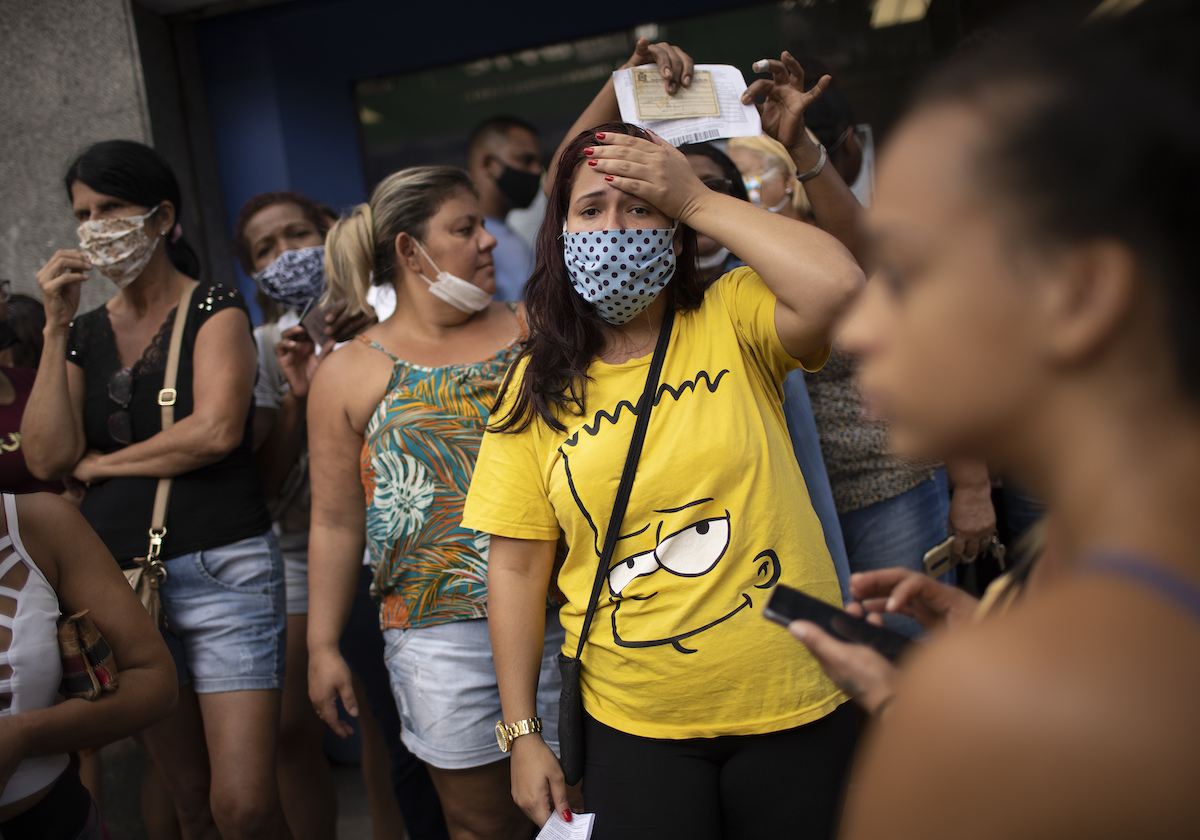 People out of work wait outside a government-run bank having technical problems to distribute their aid money amid the new coronavirus pandemic’s affect on the economy in Rio de Janeiro, Brazil, Tuesday, April 28, 2020. (AP Photo/Silvia Izquierdo)

“It’s time to talk. The president is digging his grave,” former President Fernando Henrique Cardoso wrote on Twitter on Friday. “He should resign before he is forced to resign. Save us, in addition to coronavirus, from having a long impeachment process.”

Bruno Carazza, professor of economic law at the business school Ibmec and a columnist for newspaper Valor Econômico, said Bolsonaro has begun losing the support of wealthier, more educated Brazilians, whose backing had been based on rejection of the leftist Workers’ Party — more than a dozen of whose members were jailed during a sprawling corruption probe.

Still, Bolsonaro’s approval rating has so far hovered around 33%, and Moro’s resignation has galvanized his base, which has vilified Moro as a traitor.

“I doubt that will be maintained in the medium-term, primarily because the impact of the economic crisis will be strong and the peak of the pandemic hasn’t yet been reached,” Carazza said, adding Bolsonaro will suffer further public opinion damage as revelations from the investigation dribble out.

Congress, which had been trying to hammer out solutions for the economic and health crises, will now have to absorb the impact of the probe, and possibly conduct an impeachment process if crimes are proven.

Bolsonaro on Monday appointed André Mendonça, an evangelical pastor who has served as attorney general since 2019, to replace Moro, and Alexandre Ramagem to serve as director general of the federal police.

Ramagem, who had been director of Brazil’s intelligence agency ABIN, has been photographed with Bolsonaro’s sons and his closeness with the Bolsonaro family has prompted concern among critics that he would give them undue preferential treatment.

Brazil’s last two impeachments —in 2016 and 1992— both followed allegations of crimes, deep recession and massive street demonstrations. While the first two are now in place, the last, paradoxically, has been held back by the very self-quarantine measures Bolsonaro opposes.

As the political crisis grabs a bigger spotlight, focus on social isolation is likely to fade, Carazza said.

“To the extent that the political crisis assumes more media attention, people will start feeling the worst of the health crisis has passed and start getting lax with taking care,” Carazza said. “And we will start seeing the health situation worsen.”