American Silencing (or, ¡Ya cállanse!, as Mami Would Say) 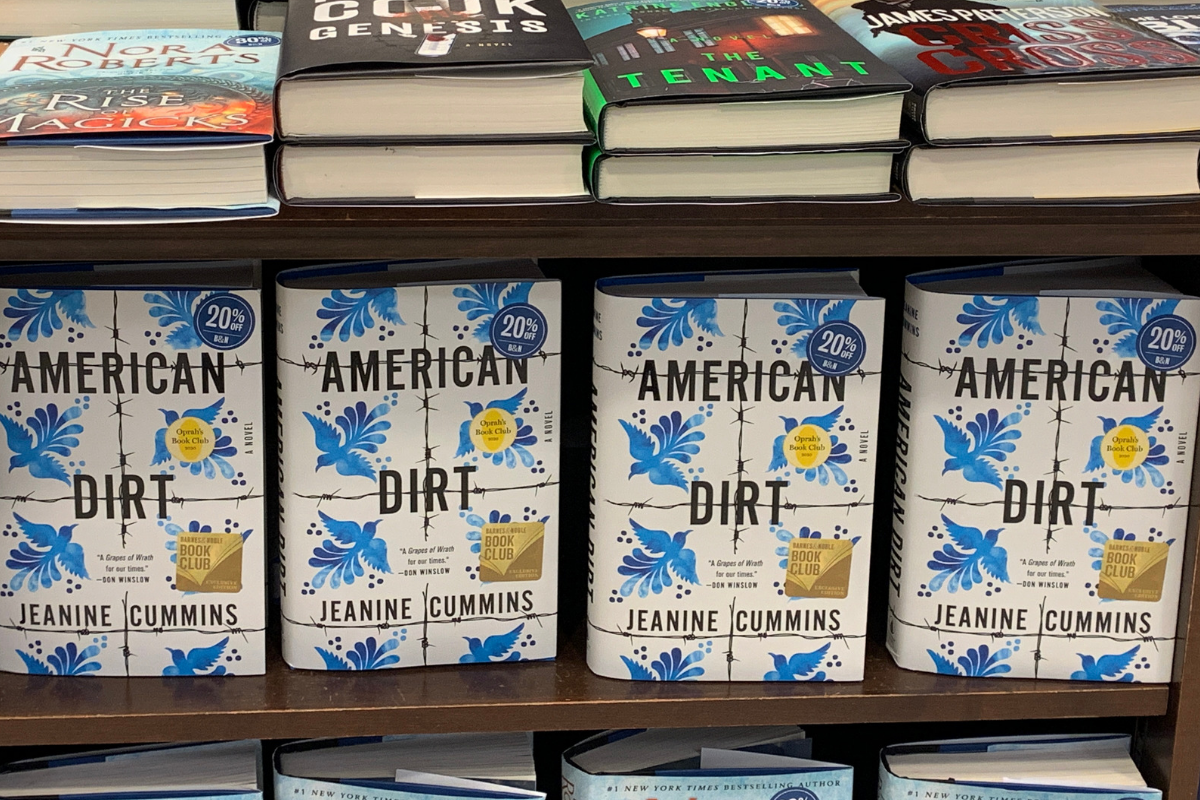 SOUTH HADLEY, Massachusetts — At the start of the January academic term, before the publicized outbreak of COVID-19, the communications office at the college where I teach asked if I would comment on American Dirt, the controversial novel by Jeanine Cummins—lauded by publishers, booksellers, and well-known authors but simultaneously derided by a core of readers as a harmful and stereotypical fantasy of forced migration through an exotic and violent Mexico. The invitation to enter the debate presented a dilemma. Do I read what I surmised from internet chatter and short excerpts to be a badly flawed book, a harmful and mangled projection of Latinx cultures, only to say bad things about it? Do I, gulp, buy it? Absolutely not.

I had been following the debate closely —the memes, Twitter trends, Oprah’s Book Club drama, the publisher’s party with barbed wire decorations— as well as read a handful of almost universally negative reviews online and in major newspapers. This represents a real cultural moment, as Latinx critics and readers —also nameless and faceless apparently— commented sharply on social media, opening a wide debate about the merits of the book, the dearth of Latinx professionals in the publishing industry, and cultural appropriation. One group of Latinx writers demanded and gained a meeting with the book’s publisher, including Myriam Gurba, the California author and teacher whose razor sharp review initially exposed the weaknesses of American Dirt. This salvo was quickly followed by counter-responses by the author, publishers, and even Oprah, qualifying their support of the book, playing the victim, or promising to dialogue with stakeholders—that is, to capitalize on the controversy too, most often asking the aggrieved to do the work of explaining what an industry got wrong (and then hopefully sell more books in the process).

The literary hubbub continued to hound me, especially after the local independent bookstore, with its monopoly on textbooks and t-shirts for my college, mirrored Oprah’s reaction. It promoted the book as an “indie” “book of the month” in February, received a backlash from faculty and patrons, qualified its support with a weak message to consumers, and then, invited colleagues and me to hold a forum on the book. The forum idea, questionably, did not happen in anticipation of the book, but only after I and others registered complaints. In fact, during the back and forth with the bookstore, the owner withheld the fact that Cummins was scheduled to visit the bookshop, before the furor and cancellation of the tour. So, was the store really interested in Latinx voices, or simply assuaging its guilt, hoping to ‘hug it out’ after-the-fact? In any case, I refused.

The most serious problem, it seems, is that Latinx reviewers were not being heard, or worse, that they were being painted as a violent mob, ready to disrupt book readings, which were cancelled nationwide. That the publishing, blurbing, and bookselling readership did not pick up on the book’s dangerous mediocrity lays bare the simple fact that the book was explicitly written for unknowing audiences ready to consume a pre-packaged, board room version of latinidad.

When the dust settles, the residues of stereotype, a cartoonish Mexico, and wretched images of migrants making lawful claims for safety will not rest on the reader, but on the Latinx community. These are the very stereotypes that drive U.S. immigration policy and animate the rhetoric from the White House. That’s the dirty part of American Dirt. I wish Oprah and the publishers and booksellers would simply state this plainly —that we are merely objects of the fantasy, “the help,” not its readers— instead of shushing Latinx and other critics as a irritants, or dangerous, or the identity police.

You see, I trusted the Latinx readers of the book as thinkers and experts. I understood that they read something that Oprah and corporate supporters did not, and bravely dared to register the offensiveness. I had painstakingly read a similar novel in the 1990s, Locas by Yxta Maya Murray, and reviewed it as a graduate student. Hoping it would be a needed treatment of youth, gangs, and gender in Los Angeles, it quickly soured, turning foul with the author’s clumsy concern over identity and authenticity very similar to Cummins’s awkward qualifications in American Dirt‘s “Afterword”—wishing for a “slightly browner” author other than herself. Murray’s book was about “the gang world as I imagined it,” said the author memorably at a book reading in Albuquerque in 1997. Murray also made a claim for authenticity, much like Cummins’s suspect deployment of her Puerto Rican grandmother and Irish husband, once undocumented. “I have no gang background, but I am a Latina,” Murray said, as if one provided authority to represent the other.

American Dirt brought all this back for me. Murray’s novel, although set in the U.S. and not Mexico, used similar racial techniques as Cummins in the place of much needed social and political context. For Locas, the author’s fixation was blood and bloodlines —”gangbanging blood,” “Spanish red,” hot fighting blood” and a dozen other examples— used as shorthand for class status and destiny. Cummins’s exotic obsession is brown skin, which she mentions fifteen times by my count. It’s an example of the stereotypical short cuts she takes throughout the novel.

I know this, because in the end, after reading reviews and excerpts at a bookstore, I relented and read the book (via PDF), but only so my voice—the one right here—might be taken seriously, knowing that previous Latinx reviewers, talented and critical, obviously were not.

Defenders of freedom in fiction-writing, including Cummins, attacked Latinx and other critics, accusing them of policing her identity. The New York Times Review of Books published five letters in response to its lukewarm review of the book, which painted critics as a single voice, solely concerned with identity and cultural appropriation. This argument is a straw man, a shield. It’s also ghosting, a way of saying ‘stay in your place,’ ‘be quiet,’ and let non-Latinx book people tell you who you are through our anointment of Cummins. The real critiques of the book’s merits—perpetuation of stereotypes, stilted language, cultural foibles, and goofy bilingualism—are being drowned out in a backlash, because a handful of readers questioned Cummins’s identity and distance from the real lives of migrants. Cummins’s clumsy articulation of this fact —to repeat, the want of a “slightly browner” author— pales in comparison to her exotic, violent, and harmful projection of Mexico and Latinx culture.

To be clear, I do not question Cummins’s or any artist’s right to write or produce work. This is the least important rebuke of American Dirt, while at the same time, a legitimate criticism. But that doesn’t mean Cummins’s portrayal and choices are ethical either—such as fictionalizing the non-fiction of other authors (“cribbing,” as one critic illustrated), odd cultural representations, fetishized use of skin tone, and Cummins’s black and white framing of the United States (read: good) and Mexico (read: bad).

Whatever distance and lack of intimacy Cummins has from her subject matter —perhaps due to the disconnect in her shifting identity claims— was not narrowed by repeated claims of years of research, but instead, it contributed to the made-up depiction of Mexico and Latinx culture in general. In fact, in her interview with María Hinojosa of the Latino USA podcast, Cummins mentioned that she dumped three years of writing, supposedly based on research, and the book came “tumbling out” in just ten months. It shows. Cummins did not use her privilege to share an important story, but used an important story to accumulate more privilege.

The real catastrophe of American Dirt is about the inability of publishers and booksellers to recognize, listen, and trust Latinx voices. The straw man argument that Latinx readers are questioning the identity of the author, which Cummins claimed on NPR, is simply a diversion to dismiss the plethora of critical reviews that critiqued the novel on its merits, in particular the stereotypical projection of Latinx culture, life, and language. These readers —often but not always Latinx— challenge the parasitic promotion of the book as well as all the readers who devoured the exoticism and stereotypes without question. Instead of shushing critical voices for seeing what was not visible, why not listen to these voices? And then read the book again, if you can bear it.