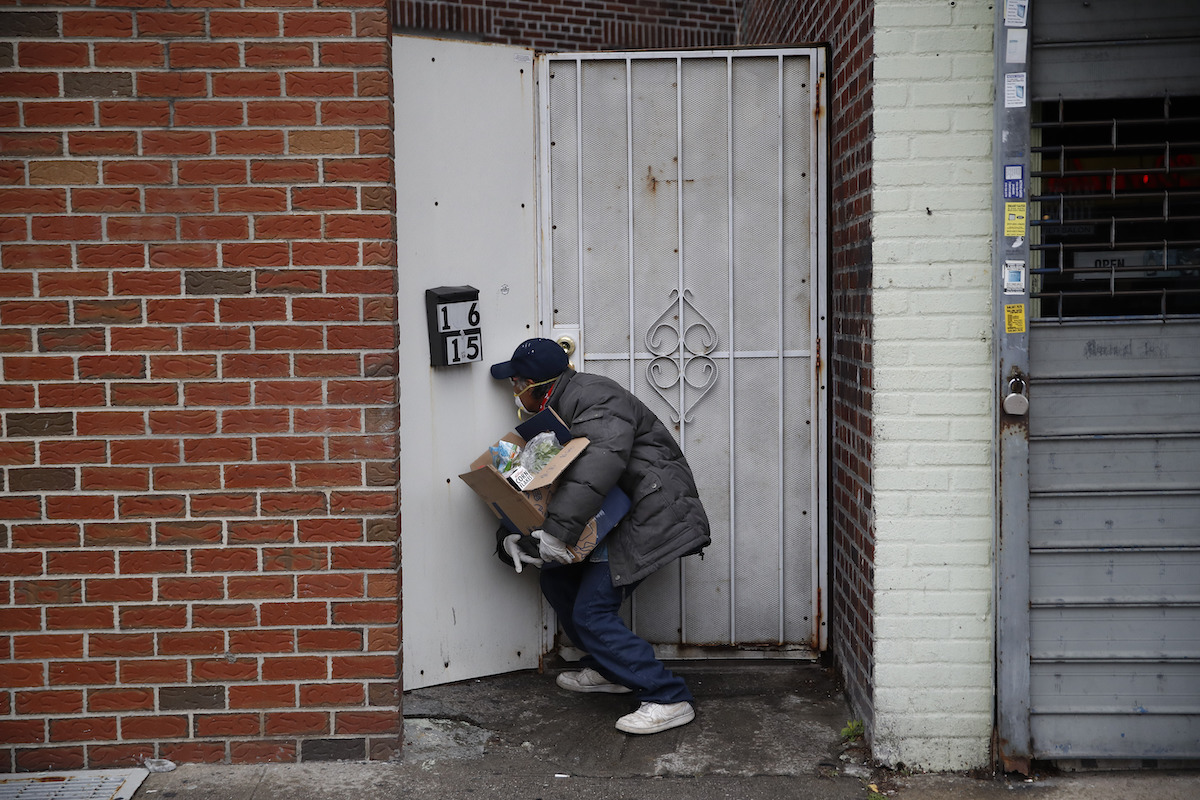 Francisco Ramírez peers through a hole in a fence while looking for an address to deliver a box of groceries to a man in need Saturday, April 18, 2020, in the Queens borough of New York. (AP Photo/John Minchillo)

NEW YORK (AP) — Every afternoon, Sandra Pérez and Francisco Ramírez go over their list of fellow New Yorkers who need help because of the coronavirus pandemic. Some are sick. Others lost jobs, but have children to feed. Others are elderly or disabled. All are immigrants, like them.

Then, the friends, both originally from Mexico, stock up on rice, beans, vegetables, cereal, soups and fruit at an East Harlem supermarket, and make deliveries by car to as many as 15 families a day.

“I feel that if we are well, physically, emotionally, then we can help others,” said Ramírez, a 52-year-old day laborer who used to do construction jobs, but now finds work scarce because of the crisis.

Pérez and Ramírez are among a growing number of people who have taken it upon themselves to help an immigrant community that has been hard hit by the pandemic, but often lives in the shadows of government and not-for-profit aide systems because of barriers such as language and immigration status.

These aide networks can be informal and operate on word-of-mouth and social media fundraising campaigns. 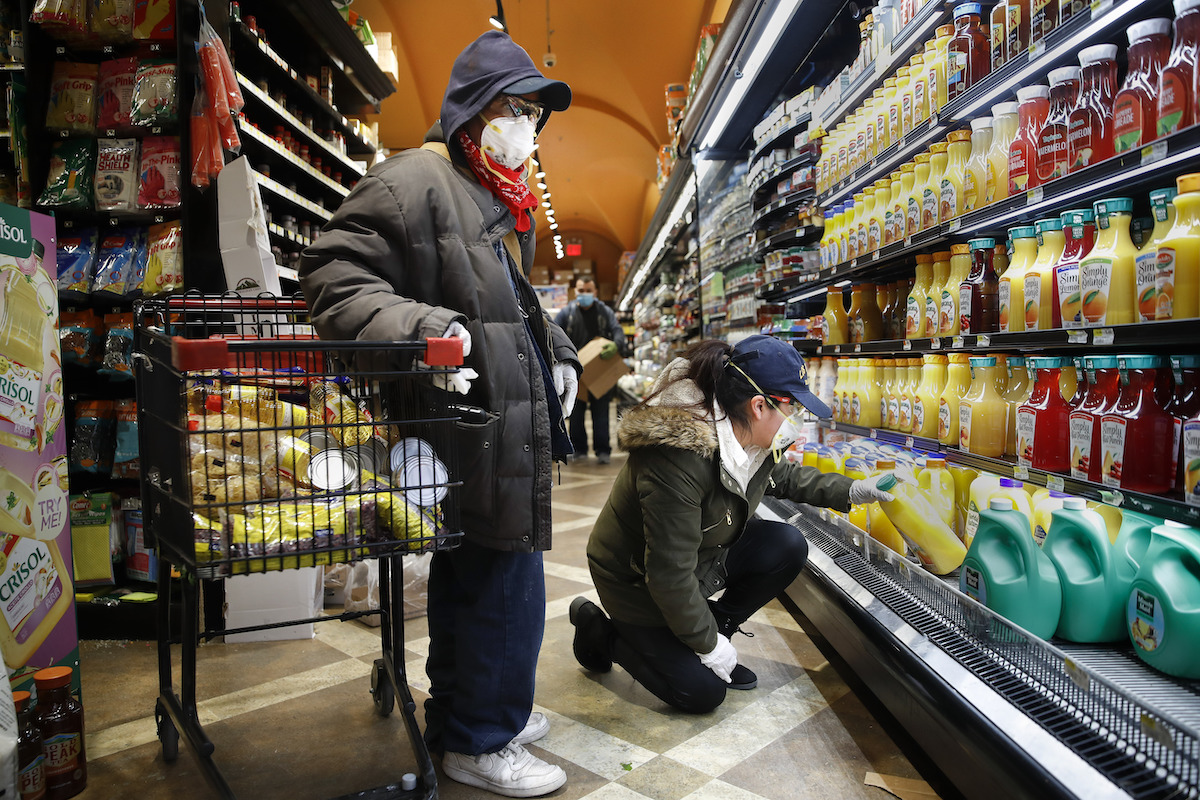 Francisco Ramírez, left, and Sandra Pérez, right, shop at a grocery store for goods they intend to donate to needy families, Saturday, April 18, 2020, in the Harlem neighborhood of New York. (AP Photo/John Minchillo)

In Stamford, Connecticut, Erika Zamora has been distributing food from the restaurant she co-owns even after it was forced to close.

“Many people here live check by check. If you miss a check you are in trouble,” said Zamora, herself a Mexican immigrant. She plans to start calling people for donations.

In Delaware, Spanish-language radio station La ZMX manager Vladimir Rosales has been receiving calls from Guatemalan, Mexican, Salvadoran, Honduran and other immigrants asking for food. He responded by soliciting donations from stores in Wilmington and Seaford and having families pick up the bags of groceries from the station.

“It is very sad. People call me in tears,” he said.

The Migration Policy Institute found that 20% of the U.S. workers in vulnerable industries facing layoffs are immigrants, even though they only make up 17% of the civilian workforce.

According to a Pew Research Center study conducted in March, 49% of Hispanics surveyed say they or someone in their household has taken a pay cut or lost a job —or both— because of the COVID-19 outbreak, compared with 29% of white and 36% of black people.

The death toll from the coronavirus has also been disproportionately high in Black and Hispanic communities in New York City. Blacks have suffered roughly double the fatality rate of whites during the epidemic, according to city health data. The fatality rate for Hispanics has been only slightly better.

Pérez said she felt compelled to begin offering volunteer help after seeing messages needy members of the Mexican community were posting on Facebook. Ramírez started his own Facebook page where people could share information. Pérez bought food with her own money at first, but she and Ramírez now pay for the groceries with donated money.

People they deliver to tell them about others going hungry. Phone numbers get passed along and chain develops: Pérez says she gets about 10 to 15 phone calls or texts per day from people seeking help.

“We want to focus on the most vulnerable ones.” said Pérez, a 40-year-old single mother who works part-time for the city.

Peréz and Ramírez spend a daily average of between $100 and $150 at the supermarket. There are days that Peruvian and Mexican restaurants donate food and the friends just distribute those boxes. They raise the money through the Facebook page and a growing list of friends.

Sometimes the requests are more grim. People ask which funeral home they should call for relatives who have died or for the name of groups that can help cover the costs of a funeral or the repatriation of ashes to Mexico. 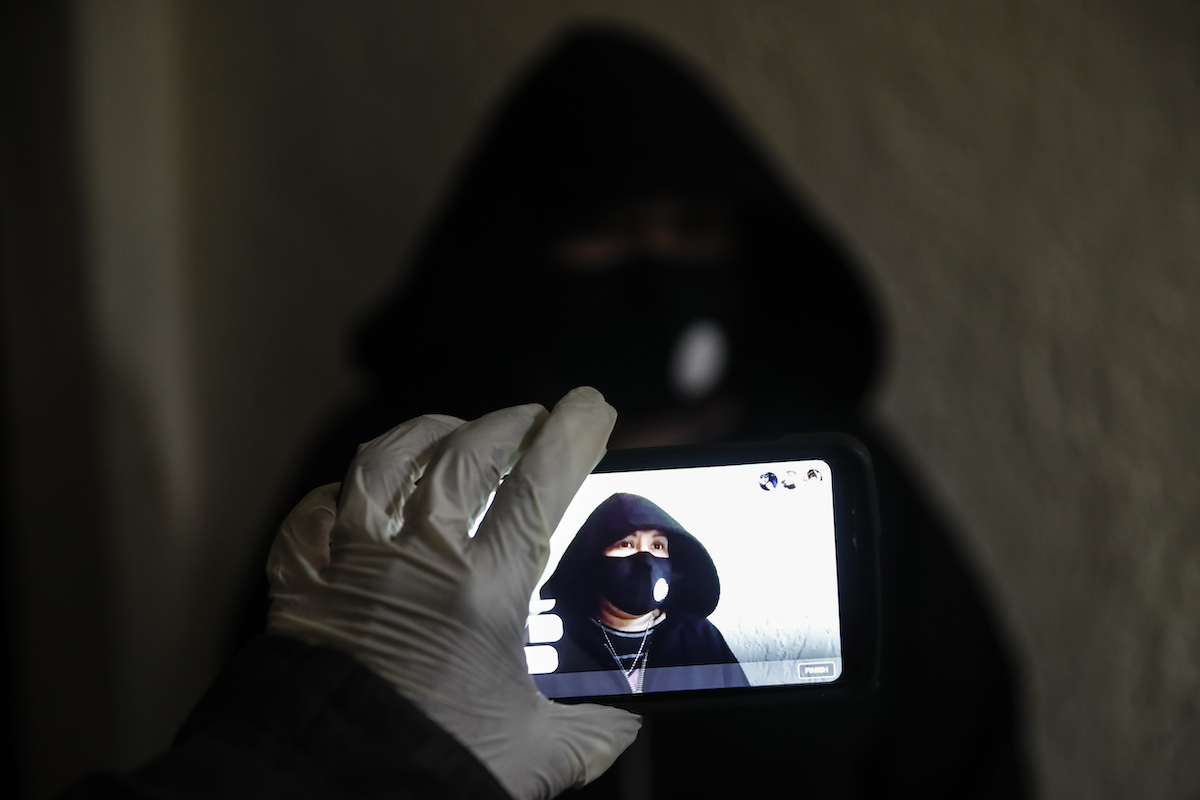 A woman speaks as Francisco Ramírez as he records video for social media after donating a box of groceries, Saturday, April 18, 2020, in the Queens borough of New York. (AP Photo/John Minchillo)

Raquel Barrera, a Mexican single mother who is sick in the Bronx, got a food delivery from Pérez and Ramírez last week.

Barrera, who is getting over a fever, body pain and strong coughing, lives with her mother, daughter, two nieces, a sister and a grandchild in a two-bedroom apartment.

“The food they brought was a blessing because we were able to feed the kids for several days,” said Barrera, who lost her job cleaning horse stables at a Chester, New York, ranch, about an hour from her home.

Immigrants without social security numbers, however, are unable to access any of these options. New York City Mayor Bill de Blasio recently announced a partnership with Open Society Foundations to provide emergency relief to immigrant families, regardless of immigration status.

In California, Gov. Gavin Newsom announced that his state will give cash to immigrants living in the country illegally who are hurt by the coronavirus, offering $500 apiece to 150,000 adults.

Filling in the gaps are volunteers like Myrna Lazcano, who lost her on job cleaning homes and offices thanks to the shutdown.

The 43-year-old Mexican immigrant, her husband and two daughters live off their savings, but still Lazcano delivers food to others in her East Harlem neighborhood bought with money that local churches, activists and acquaintances.

“By helping the community like this I feel that we are lifting the weight of this crisis,” she said. “People smile when they see the bags with food. I call them canisters of hope.”