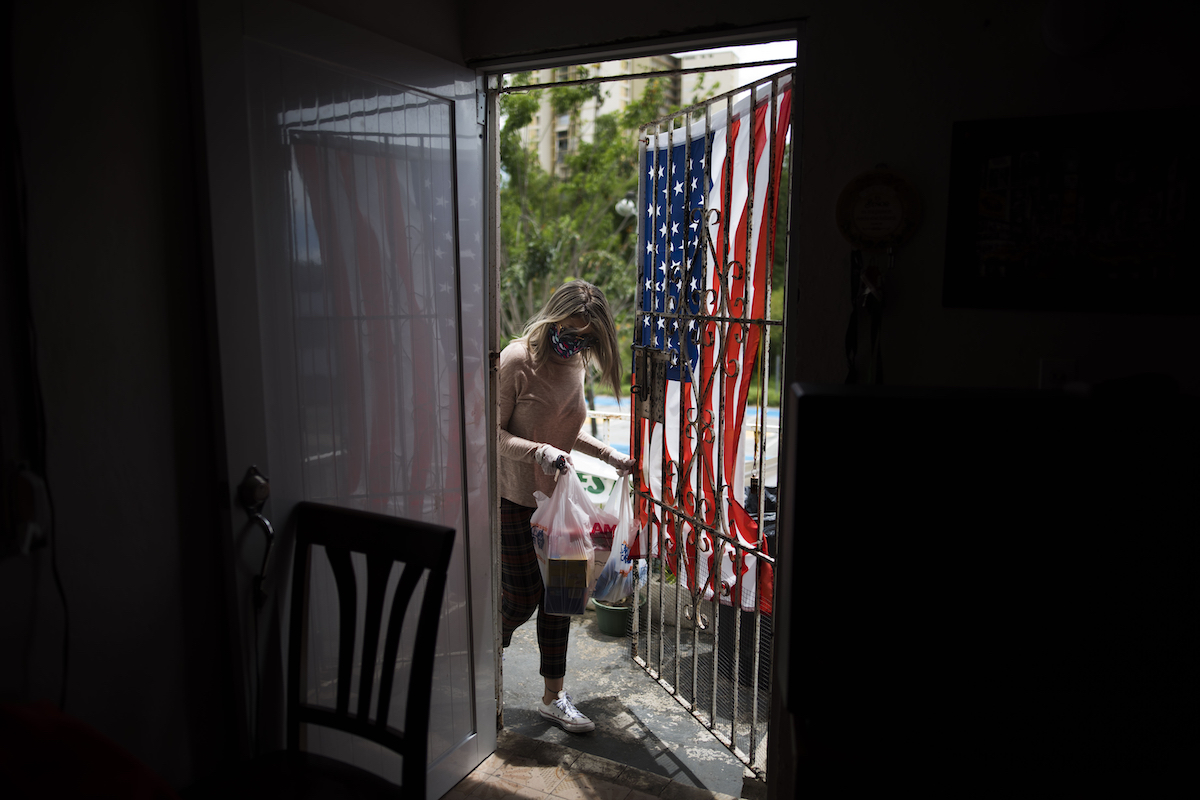 Social worker Michelle Valentín, a former teacher, brings food to Ángel Ruiz and Ivelisse Ríos, a couple who are having a hard time feeding their two children while schools are closed to help contain the spread of the new coronavirus in San Juan, Puerto Rico, Wednesday, April 29, 2020. (AP Photo/Carlos Giusti)

SAN JUAN, Puerto Rico (AP) — Puerto Rico’s government has failed to tap into millions of federal dollars set aside for the island as a growing number of unemployed parents struggle to feed their children in a U.S. territory where nearly 70% of public school students are poor.

The roughly $290 million that the U.S. government made available to help Puerto Rico schoolchildren amid a coronavirus lockdown has remained untouched for more than a month because local officials have not submitted a plan detailing how they intend to use the funds.

“It makes you say, ‘Damn it, where is the help?'” said Joalice Santiago, a fourth grade teacher who buys food for her students and, like many of her co-workers, goes house by house to distribute it.

In a move expected to ease the food crisis caused by the shuttering of school cafeterias in mid-March, Puerto Rico’s governor announced late Wednesday that cafeteria workers would prepare meals, but only if requested by mayors of the island’s 78 municipalities. City workers would then be in charge of distributing the food to children in need.

The announcement came amid growing outrage over the situation and a day after Education Secretary Eligio Hernández insisted that he would not reopen school cafeterias that have been closed for nearly two months. He said it was too risky to open them because 64% of workers are elderly and he worried about exposing them and children to the coronavirus. It’s a dilemma that school districts on the U.S. mainland have faced, with some shuttered cafeterias reopening to distribute food on a takeaway basis.

The abrupt turnaround comes weeks after Puerto Rico’s Department of Education offloaded food to nonprofit organizations and a food bank to distribute to children. Activists, teachers and a federally appointed control board had warned that it was not enough and that it was not reaching those most in need.

Teachers like Santiago vowed to keep helping impoverished families as many remained wary about the government’s announcement and its ability to meet children’s needs. On a recent sweltering morning, she popped open her trunk and grabbed a loaf of white bread as she approached Délia Vicente, an unemployed mother of two boys whose husband is hospitalized with a bacterial infection and unable to work as a debris collector.

“I pretend to be strong, but I can’t,” Vicente said as she wiped away tears and turned away from her oldest son, who was watching. “I try not to let them see me cry.”

The U.S. territory of 3.2 million people has a poverty rate of more than 40% that is deepening with a nearly two-month lockdown aimed at curbing the spread of the new coronavirus, as the island struggles to recover from Hurricane Maria and a string of strong earthquakes amid a 13-year recession. It is the highest poverty rate compared with any U.S. state, and Vicente and her family fall into that group. She said teachers are the only ones who have donated food for her two boys, ages 9 and 11, despite the government saying schoolchildren are being fed.

Hernández’s department has distributed more than 350,000 pounds of food from 704 schools to nonprofit organizations and a food bank. That food has already run out, and another nearly 180,000 pounds will soon be distributed. 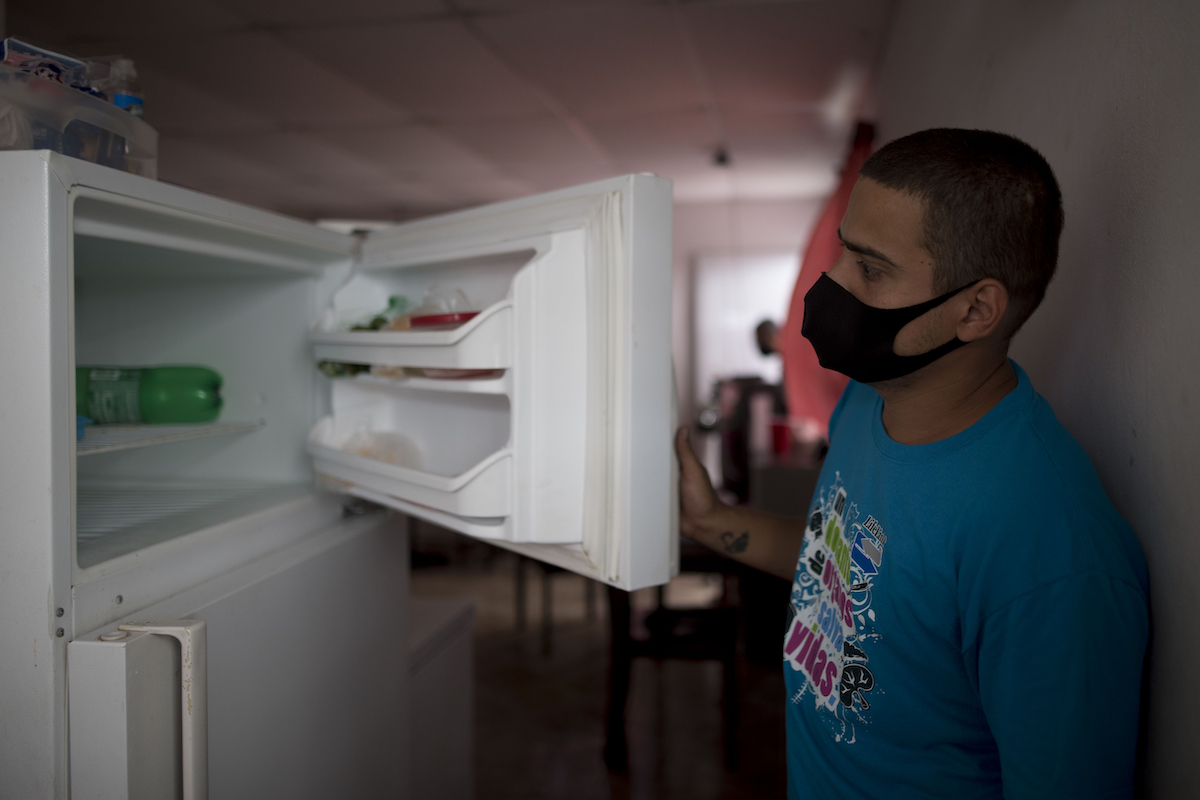 Ángel Ruiz shows his empty freezer at his home where he and his wife Ivelisse Ríos are having a hard time feeding their two children while schools, and their cafeterias, are closed to help contain the spread of the new coronavirus in San Juan, Puerto Rico, Wednesday, April 29, 2020. (AP Photo/Carlos Giusti)

Hernández declined to comment on a lawsuit that seven mothers and a group of nonprofits filed on Tuesday against him and the school system, saying the government’s actions are “inhumane, cruel, inadequate, insufficient and evasive of their responsibility.”

The lawsuit states that the 350,000 pounds of distributed food represents only a little more than a pound per student to cover their needs during more than 40 days of lockdown. Normally, Puerto Rico’s 292,000 public school children receive breakfast, lunch and a snack.

“I have children who are in the middle of a crisis because those meals were their only ones for the day,” said social worker Michelle Valentín. “Families are saying they’re not getting any donations when they call the food bank.”

A federal board overseeing Puerto Rico’s finances had demanded that education officials create a food distribution plan and criticized them for donating raw food to nonprofits.

“This represents only fourteen days of food, while schools have been closed for over a month,” the board wrote in a letter to Gov. Wanda Vázquez. “Furthermore, this food is being made available to all community members; while commendable to provide food for all, this program is designed for students and their families.”

The board also joined teachers and social workers in suggesting that Puerto Rico follow the lead of major U.S. cities, which are delivering the food or offering meals to go. But even some school districts in the U.S. mainland have cut back on meals as money runs out or workers become infected with COVID-19.

It’s a concern that Nelly Ayala, president of a Puerto Rico school cafeteria workers’ union, has raised, adding that they never demanded cafeterias be closed, only that employees be protected.

“We have always been here in any emergency, but this time there’s a serious personal safety issue that needs to be taken into account,” she said in a statement.

Puerto Rico’s Department of Education said it is launching a federally funded program this summer so that nonprofits can offer up to two free meals a day to children up to age 18, but many worry thousands of families cannot wait that long. Critics also worry about how quickly school cafeteria workers will be able to resume their jobs following Wednesday’s announcement, and whether all mayors will request meals.

Especially hard-hit are single mothers like Jenny Encarnación, an unemployed nail technician who struggles to feed her son, a 4th grade student. As Encarnación explained how she hasn’t received any help from the government, a female passer-by who overhead the conversation interjected, “No one has!” and kept walking.

“My savings have taken a nosedive,” Encarnación continued. “I have no income.”