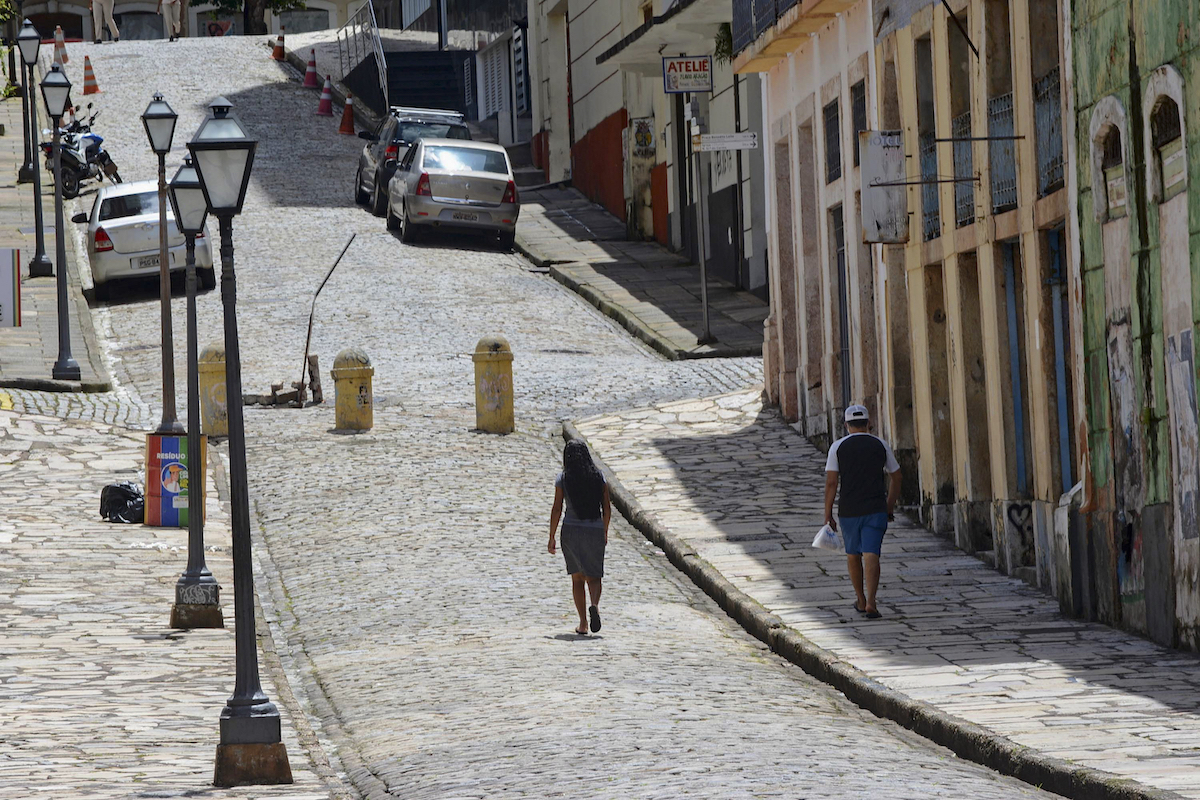 People walk in a street during a lockdown imposed by Maranhão’s government to help stop the spread of the new corona virus at the historic district in downtown Sao Luis, northeastern state of Maranhão, Brazil, Tuesday, May 5, 2020. (Douglas Junior/Futura Press via AP)

SÃO PAULO (AP) — The capital of tropical Maranhão state ground largely to a halt Tuesday, becoming the first major Brazilian city to enter a lockdown in the hopes of preventing the coronavirus pandemic from overwhelming the health care system of one of the country’s poorest states.

Some 1.5 million people in São Luís and three neighboring cities have been confined to their homes, except for a handful of essential tasks, like buying groceries and visiting pharmacies. The vast majority of businesses have been shuttered, as have schools and public transport. Parks are closed, and residents cannot go out to exercise.

Hours after the order went into effect, Maranhão state’s health secretary said the capital city looked like a “ghost town.” Almost no one was on the main streets, according to Carlos Eduardo Lula. Police manned roadblocks on the main avenues, and those wishing to pass through had to prove that they held essential jobs or had a receipt from a supermarket or pharmacy run.

The decree from Gov. Flávio Dino will last 10 days to begin with and applies to one-fifth the state’s population.

The order comes despite President Jair Bolsonaro’s insistence that only the elderly and other high-risk populations should stay home. The president and his followers have repeatedly criticized local leaders who imposed more stringent restrictions in the face of surging coronavirus cases. For most people, the virus causes mild or moderate symptoms. For some, especially older adults and people with health problems, it can cause more severe illness and lead to death.

Though not as restrictive as some orders seen in parts of Asia, Dino’s decree is meant to keep most people indoors as much as possible. Last week, fears of the coming closure prompted panic buying even though supermarkets and pharmacies will remain open.

“We didn’t go for total shutdown, we have kept the basic level of activities, and we will be watching,” Dino said in a video call with The Associated Press on Tuesday.

With a population of 7.1 million, the state has confirmed 4,530 cases, the vast majority in and around São Luís. More than 270 have died. Experts say insufficient testing in Brazil means official figures are undercounts.

The lockdown order came just as those cases were overwhelming the city’s hospitals, according to Lula, the state health secretary, who told the AP that the local health system had been headed toward collapse. He defined that as having no vacancy whatsoever — a fate he hopes to avoid by increasing bed capacity and, now, by keeping people indoors.

“Collapse happens if we let everyone get sick at the same time,” Lula said. “Every week we have to try to push that date back.”

When the pandemic hit, Maranhão had only 232 intensive care beds for COVID-19 patients, concentrated in just three cities. After hustling to build out capacity, it has 761 ICU beds and offers some level of intensive care in 11 cities, according to state authorities. Two field hospitals are being built and will bring the number of ICU beds to 910, Dino said.

The order that went into effect Tuesday stems from an April 30 ruling by Judge Douglas Martins, who was responding to concerns about the health system. The request for a lockdown came from private hospitals whose beds were nearing full and public prosecutors’ warnings about the public hospital system.

The new decree for São Luís includes fines of up to $360 for those in violation.

“I don’t suffer the pressure that elections submit governors to,” the judge told the AP. “With this ruling perhaps we will have given the freedom that governors need nationally, not just in Maranhão.”

In contrast, Santa Catarina Gov. Carlos Moisés, an ally of Bolsonaro’s, began relaxing restrictions, and then images of people swarming into a reopened shopping mall on April 22 in the city of Blumenau circulated widely. Health authorities have recently noted a spike in COVID-19 cases in the city and state.

“We have a national challenge, but the federal government keeps sabotaging efforts to confront it,” Gov. Dino said. Bolsonaro “makes our work harder.”

Like elsewhere, the debate over virus response has turned political. Bolsonaro has criticized governors for going too far with restrictions; as he has pushed to have them lifted, he has repeatedly tussled with the courts—part of the growing strain between Brazil’s institutions.

Judge Martins said he has even received death threats on social media over his ruling, but residents of Maranhão appear to be complying.

“The pandemic precipitated these things. Now we will see how we come out, all the institutions, not just the judiciary,” said Martins. “We’ll see how they all behave at this crossroads.”