By: Juan Pablo Garnham
May 9, 2020
2:04 PM
Originally published at The Texas Tribune 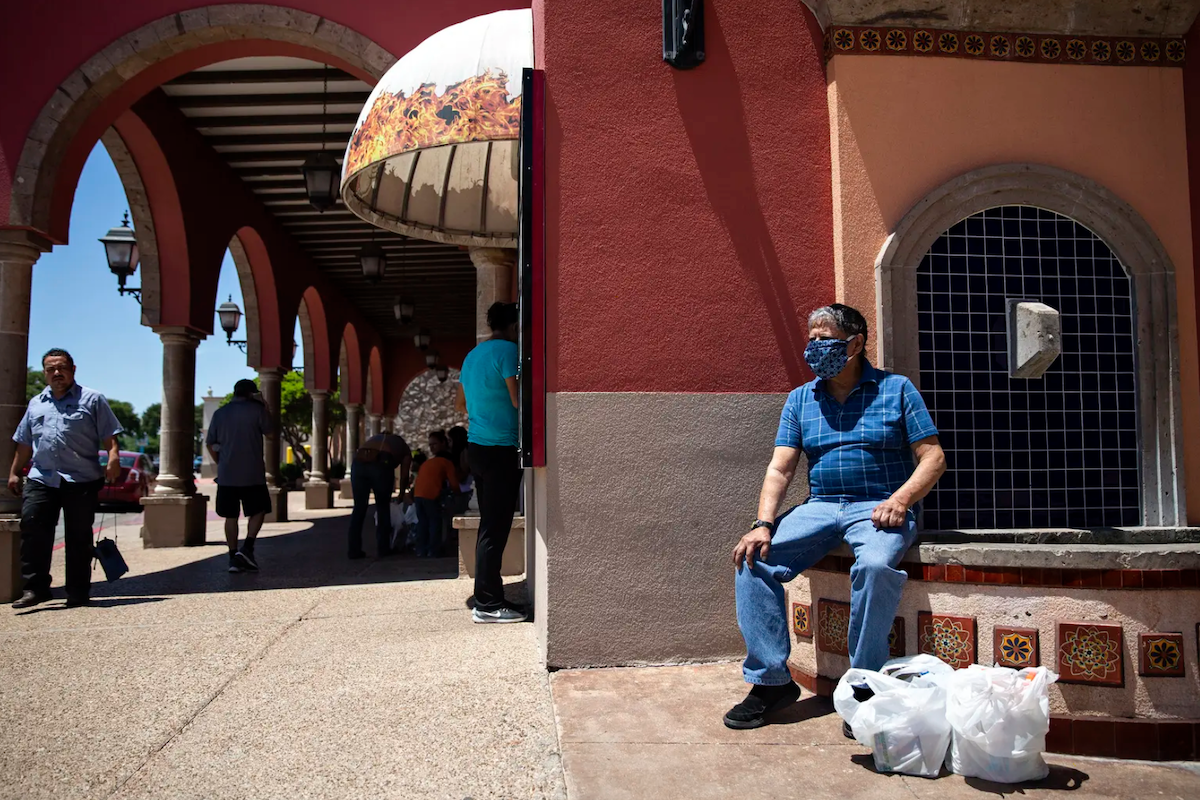 Customers visited La Gran Plaza in Fort Worth on May 1, the first day shopping malls, restaurants, retail outlets and movie theaters were allowed to reopen. (Shelby Tauber for The Texas Tribune)

The Texas Tribune is a nonprofit, nonpartisan media organization that informs Texans —and engages with them— about public policy, politics, government and statewide issues.

In the center of the 1.2 million-square-foot mall, a stage where mariachi bands normally perform remained empty. A light blue neon sign overlooking the atrium asked, “Are we having fun yet?” as speakers blasted salsa, rancheras and Latin pop. No one was dancing.

A few storefronts away from a movie theater that sat dark, a padlock hung from the door handles of Maricruz Ávila’s sporting goods store, Pasion Deportes. The soccer jerseys, Mexican hats, sneakers and colorful Mexican dresses in her store’s windows hardly got any looks from shoppers.

Even before the coronavirus pandemic effectively ground Texas’ economy to a monthlong halt, Ávila was struggling to pay her rent and other fees on time. By the start of May, she owed $5,000 for rent, late fees, maintenance and insurance. The $1,400 she gave her landlord in April wasn’t enough to gain access to her store in time for Gov. Greg Abbott‘s reopening of the state economy so she could begin earning money to pay back the debts and afford upcoming payments.

Like many small-business owners in Texas, Ávila has reached a financial cliff after being forced to close for weeks in a state that didn’t prohibit evictions for commercial properties through the pandemic and is limiting how many customers can visit a store to help minimize spread of the virus. But for Latino business owners, other obstacles —such as navigating language barriers and struggling to access bank loans— will make it even harder to come back from the brink. And it’s happening in a state where there are more than 700,000 Latino-owned businesses, according to the Texas Association of Mexican American Chambers of Commerce. 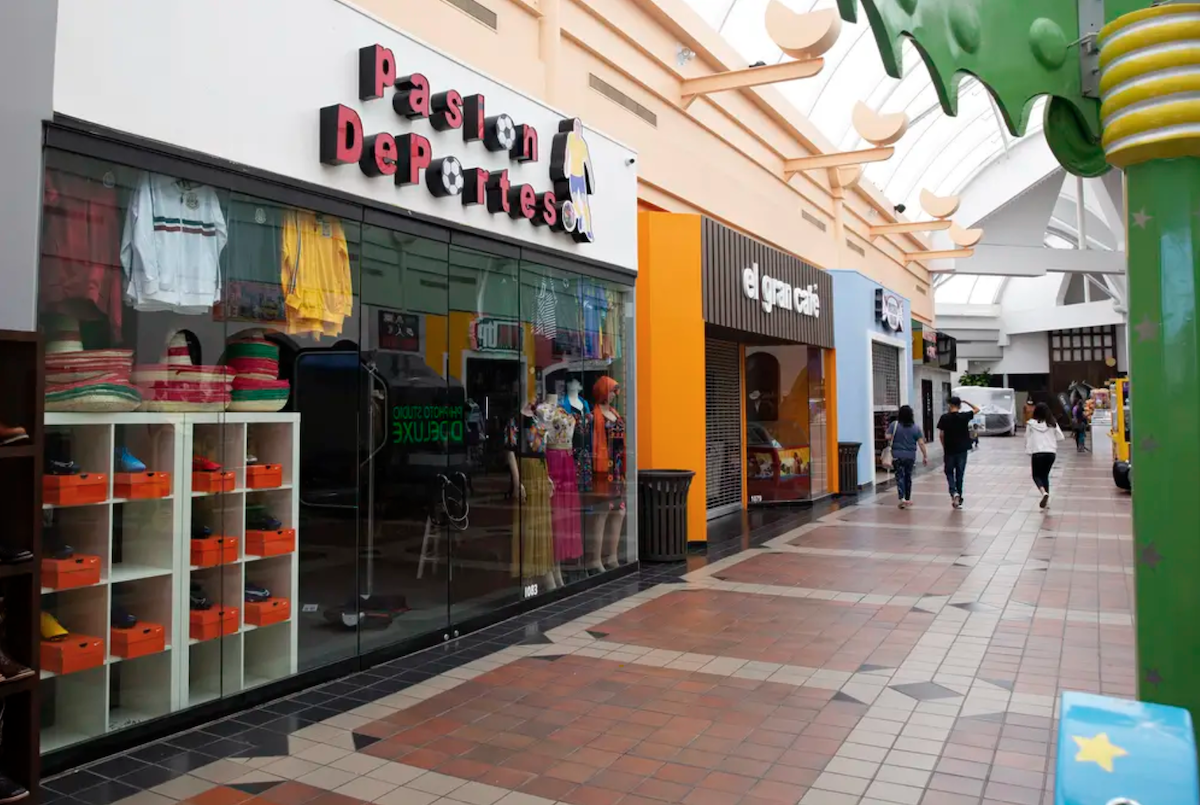 Pasión Deportes, a shop in La Gran Plaza in Fort Worth, was one of several that did not reopen last week. (Shelby Tauber for The Texas Tribune)

“Those that have a way to pay rent are paying it. Those who aren’t paying it, it’s because they don’t have the money,” said Luz Herrera, a law professor at Texas A&M University and adviser to some of the store owners in La Gran Plaza. “Even if they’re paying and opening on May 1, it’s going to be very hard for them to come up with June 1’s rent if mall operations are at 25%.”

That could have a ripple effect beyond the mall and its shop owners because La Gran Plaza not only provides employment to thousands of people in the area, but spurred cultural and economic activity that made the surrounding neighborhood safer, according to customers and business owners who frequent the area.

“It’s definitely a place where a family could spend a Sunday,” said Anette Landeros, president of the Fort Worth Hispanic Chamber of Commerce. “The kids can watch some music while the parents shop or the abuelitos listen to mariachis. It really is kind of a community center, but also a business incubator where Latinos have a space where they feel comfortable in taking a chance at entrepreneurship.”

Even federally backed loans, like those through the Paycheck Protection Program that Congress created to help businesses stay afloat, are more difficult for some Latino business owners to access.

“There is no question that businessmen and women of color have been underserved by this program, and that must be fixed,” said Ellen Harnick, executive vice president of the Center for Responsible Lending.

Many La Gran Plaza tenants are asking for payment plans or for the mall’s management company to waive late fees. José de Jesús Legaspi, president of mall owner The Legaspi Company, said tenants’ situations are handled on a case-by-case basis and noted that some store owners owed money before the statewide stay-at-home orders.

“Unfortunately, we have to run a mall, and we have to face certain requirements with our lending community,” he said. “If we’re not able to maintain a revenue source … then all of a sudden the big ship dies. Everybody loses.”

Even before COVID-19, malls across the country were suffering as they battled the rise of online shopping. More than 9,300 retail stores were expected to close in 2019, according to an analysis by Business Insider. But La Gran Plaza was an exception. On weekends, the parking lot was full, and some restaurants would have so much demand that customers waited up to an hour for their orders. For Mexican Independence Day, the events in the mall would draw up to 80,000 people.

El Mercado is a popular section of the mall that mimics the tianguis, or traditional Mexican markets, where customers can find fruit and ice cream shops, cellphone repair shops and all sorts of Mexican snacks.

“It has many similar things, like the sweets, the piñatas, the boots, the sombreros. It’s everything more for us Latinos,” said Fort Worth resident Lucía Jiménez, who vistited the mall in the last week with a facial mask and gloves.

El Mercado is also more affordable for tenants with more financial constraints and those who are just starting their businesses. Entrepreneurs can open up stores with few resources while accessing the crowds of the mall but paying a more affordable rent than in other areas of the shopping center. And working at La Gran Plaza also helps native Spanish speakers with any language barrier they may have.

“As a Hispanic, you feel like you are arriving and your Spanish isn’t fluid enough to do business,” said Carlos Jauregui, owner of J&A Signs, a graphic design store. “Here you can start working on both languages and access a whole community.” 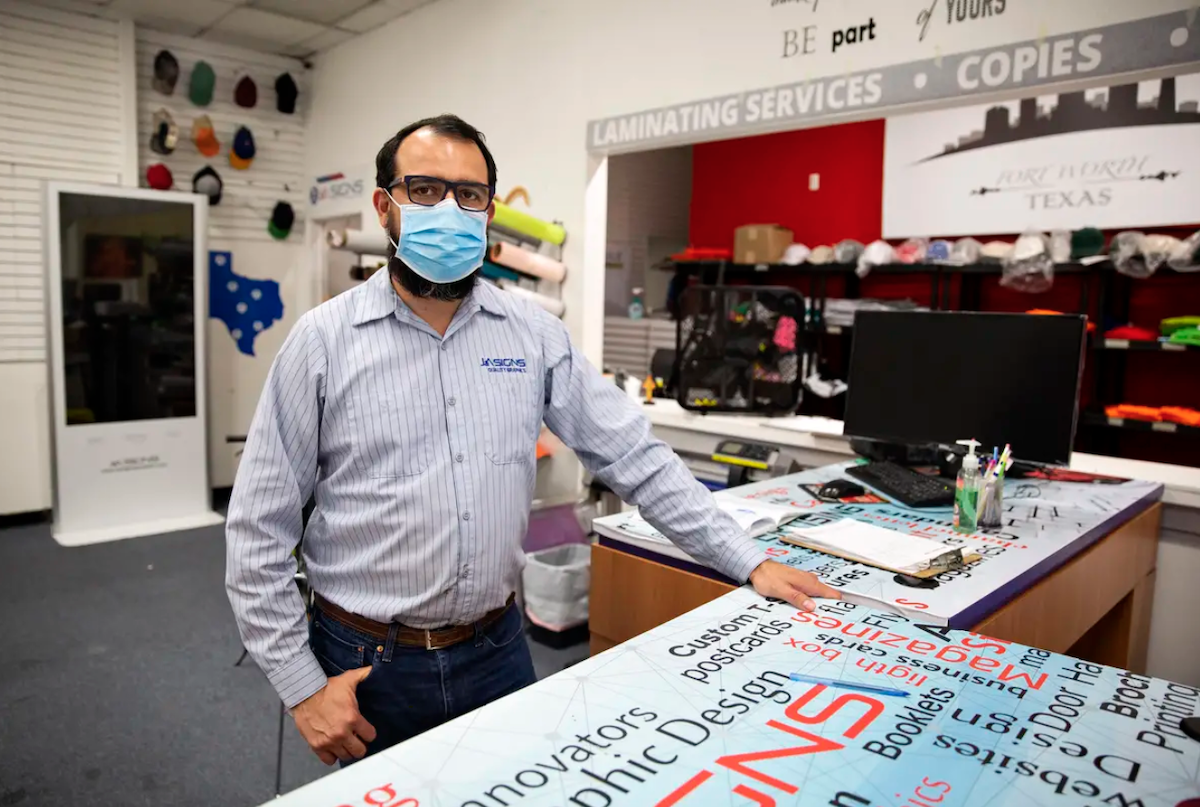 But during the COVID-19 crisis, the language barrier has resurfaced as an issue for store owners.

“These are leases that are dense, that have dense language in them,” said Herrera. “Most of those folks are not in the business of learning leases, and they don’t understand the implications of all these late fees or anything else.”

That has made it more difficult for many tenants to understand loan requirements and assistance programs like the federal Paycheck Protection Program or microloans provided by nonprofits. Many of those programs have been overwhelmed by applications, and it’s estimated that the funds for the second round of the Paycheck Protection Program will run out quickly, as the first round did.

“Even if you understand the language, there are so many resources that are just shooting at people left and right and like grants that come out. But then the money runs out,” Landeros said. “It’s hard to navigate when it’s in your native language. It’s even harder when you’re still trying to understand what those resources are.”

“As soon as we heard about the loans, we tried to look for them, but the situation was really bad, it was much more complicated than we expected it to be,” said Juan García, who owns the cellphone store New Generation Wireless. “Until now, we haven’t received any positive news from the bank.”

The Paycheck Protection Program established by the federal government conceived of a process in which banks served as middle men. But small-business owners said that banks typically prioritize existing relationships and blue chip clients. In the meantime, many small-business owners found themselves tied up in bureaucratic messes without expert help as they tried to translate disqualifying technicalities in the fine print. Often, their calls to banks were not returned.

Latino business owners said that they don’t feel that they have as fluent of a relationship with banks as their white peers. An analysis by the Federal Reserve Bank of Atlanta published in 2019 showed that while 49% of businesses owned by white people receive all the financing they request, 35% of businesses owned by Hispanic people have such success. To keep their businesses running, many Latino and black entrepreneurs end up relying on personal funds and personal credit scores, both of which tend to be lower than those of the average white entrepreneurs.

Sonia Rodríguez, owner of the pupusa restaurant El Torito, desperately needs some financial relief. On the day that the mall closed, she had to throw away 70 pounds of pork, 40 pounds of chicken and 10 pounds of beans. Before the crisis, on a bad day she would make $350. Now, on a good day she makes $70. All of her employees are family, which makes her less likely to qualify for the PPP loans. And, she said, banks are wary to loan to immigrants like herself.

“They say they never know if at any moment we will decide to go back to our country, leaving a pending debt,” she said.

Landeros said small-business owners already behind on their bills are also weary of city microloan programs because they are worried about acquiring more debt.

“We need to just push that money out. It needs to be a grant, it needs to be forgivable if they meet certain requirements, because the loans are just adding to the emotions of uncertainty,” Landeros said.

The city is considering another program of $15 million, funded through the federally backed Coronavirus Aid, Relief and Economic Security Act, but that would only come around mid-May, the Fort Worth Star Telegram reported last week.

In the meantime, business owners are doing what they can. As customers slowly return to La Gran Plaza, they’ve been trying to raise funds to support the most hard-hit tenants, like sporting goods store owner Ávila. But they said that it might not be enough for many of them and that they need flexibility from the mall’s management.

“We don’t know for how long this will last for. We don’t know how deep it will affect us,” said Jauregui, the graphic design store owner. “And if there are no business owners, there’s no plaza either.”

This story was produced in part with funding from the Ravitch Fiscal Reporting Program at the Newmark Graduate School of Journalism and is part of a national project on how adequate state safety nets are for the pandemic recession.

Disclosure: The Texas Tribune, as a nonprofit local newsroom and a small business, applied for and received a loan through the Paycheck Protection Program in the amount of $800,000.

Texas A&M University has been a financial supporter of The Texas Tribune, a nonprofit, nonpartisan news organization that is funded in part by donations from members, foundations and corporate sponsors. Financial supporters play no role in the Tribune’s journalism. Find a complete list of them here.

Juan Pablo Garnham reports on urban affairs for The Texas Tribune, focusing on the main challenges of the state’s largest metro areas—Houston, Austin, San Antonio, El Paso and Dallas-Fort Worth, where he is based. He previously worked as senior producer for the podcast In The Thick, editor of CityLab Latino and city hall reporter for El Diario in New York. He has also taught at the Craig Newmark Graduate School of Journalism at CUNY. He is from Santiago, Chile, and the Texas flag constantly reminds him of his home country. Twitter: @jpgarnham.