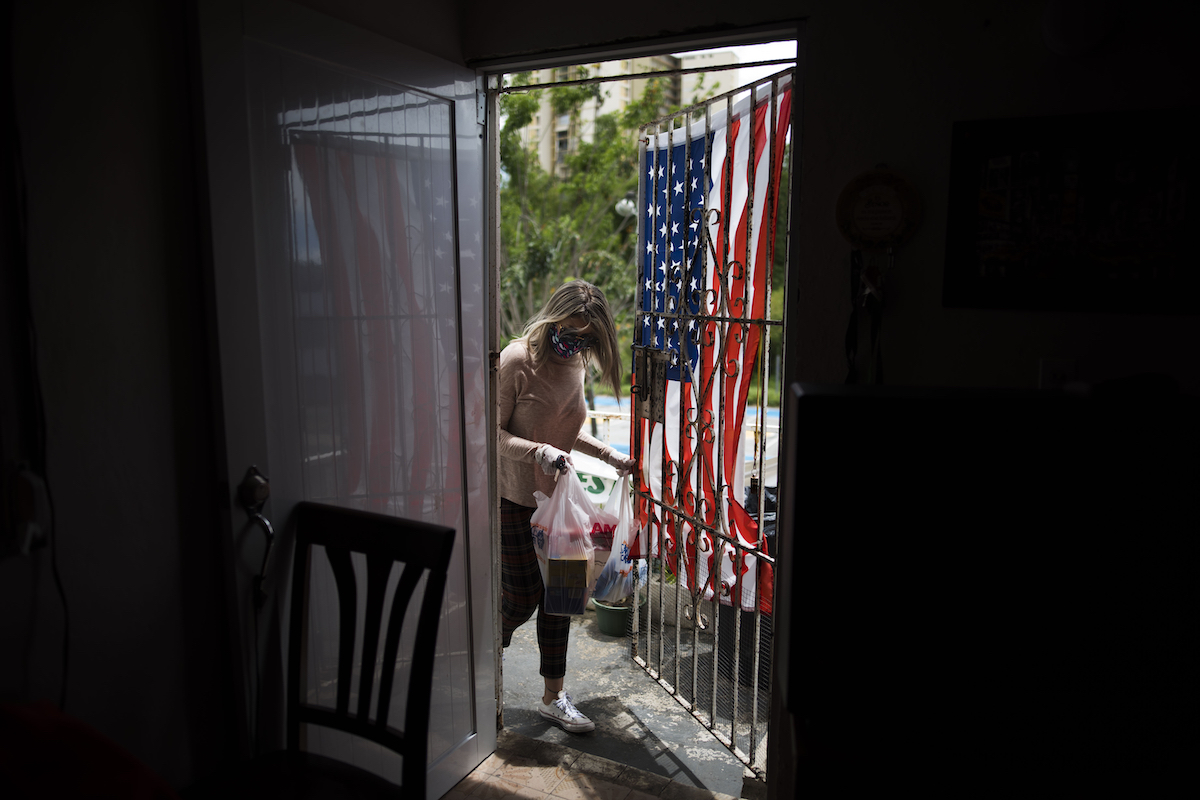 In this April 29, 2020 file photo, social worker Michelle Valentín, a former teacher, brings food to Ángel Ruiz and Ivelisse Ríos, a couple who are having a hard time feeding their two children while schools are closed to help contain the spread of the new coronavirus in San Juan, Puerto Rico. (AP Photo/Carlos Giusti, File)

SAN JUAN, Puerto Rico (AP) — Puerto Rico’s governor on Thursday revealed how the U.S. territory will spend more than $2.2 billion in federal aid to fight the new coronavirus amid concerns that the money will not reach those in need soon enough.

The bulk of the money, $300 million, will be used in part to increase testing, expand contact tracing and help the unemployed affected by a lockdown imposed in mid-March. Another $100 million will be given to the island’s 78 municipalities for coronavirus-related costs and $100 million to government agencies to clean work areas and implement social distancing measures so that public employees can return to the office. In addition, $486 million will be placed on reserve.

In a nod to concerns about potential mismanagement given the large amount of money to be distributed, Gov. Wanda Vázquez said she will create a team charged with overseeing and auditing the funds.

“There can’t be any opportunities for corruption,” she said. “Fraud and theft will not be allowed … don’t even try it.”

Many Puerto Ricans also worry that the newest funds available will once again be delayed despite pledges from the government that they have created a system to reduce bureaucracy and speed up the distribution of money.

Vázquez and other government officials acknowledged there are tens of thousands of people still waiting for incentives and benefits announced shortly after a lockdown was imposed in mid-March that has deepened the island’s economic crisis. Roughly 140,000 people out of 190,000 who applied for and qualify for unemployment benefits have received them. In addition, technological failures has forced the government to process by hand more than 87,000 requests to access the federal Pandemic Unemployment Assistance program.

“Yes, the system has collapsed,” Vázquez said. “No one was prepared for the number of requests like the ones we have received.”

Meanwhile, in an announcement cheered by the private sector, Vázquez said $350 million will be used to help reimburse employers who kept paying their workers despite closing their businesses. Another $200 million is slated for self-employed workers who will receive $1,000 each in a new round of incentives.

In addition, $350 million will go toward small and medium-sized businesses for incentives ranging from $5,000 to $10,000 each, a move praised by Jorge Argüelles, president of Puerto Rico’s Center of United Retailers.

“They’re the ones most in need right now,” he said.

The pandemic hit as Puerto Rico tries to recover from hurricanes Irma and Maria and a string of recent strong earthquakes that all together have caused billions of dollars in damage. In addition, the U.S. territory is undergoing a bankruptcy-like process after announcing in 2015 that it could not pay its more than $70 billion public debt load.

Vázquez said she’s aware that the money to be distributed is not enough.

“We have to seek more,” she said. “There are a lot of people in need.”

Puerto Rico has a poverty rate of more than 40%, the highest compared with any U.S. state, and economists warn that the unemployment rate could soar beyond 30% given the pandemic and the closures it forced.

The island’s health department has reported more than 2,400 confirmed coronavirus cases and at least 117 deaths as scientists urge the government to do more testing. Some 80,000 people have been tested on an island of 3.2 million.