Disease That Began Among Rich Shifts to Latin America’s Poor 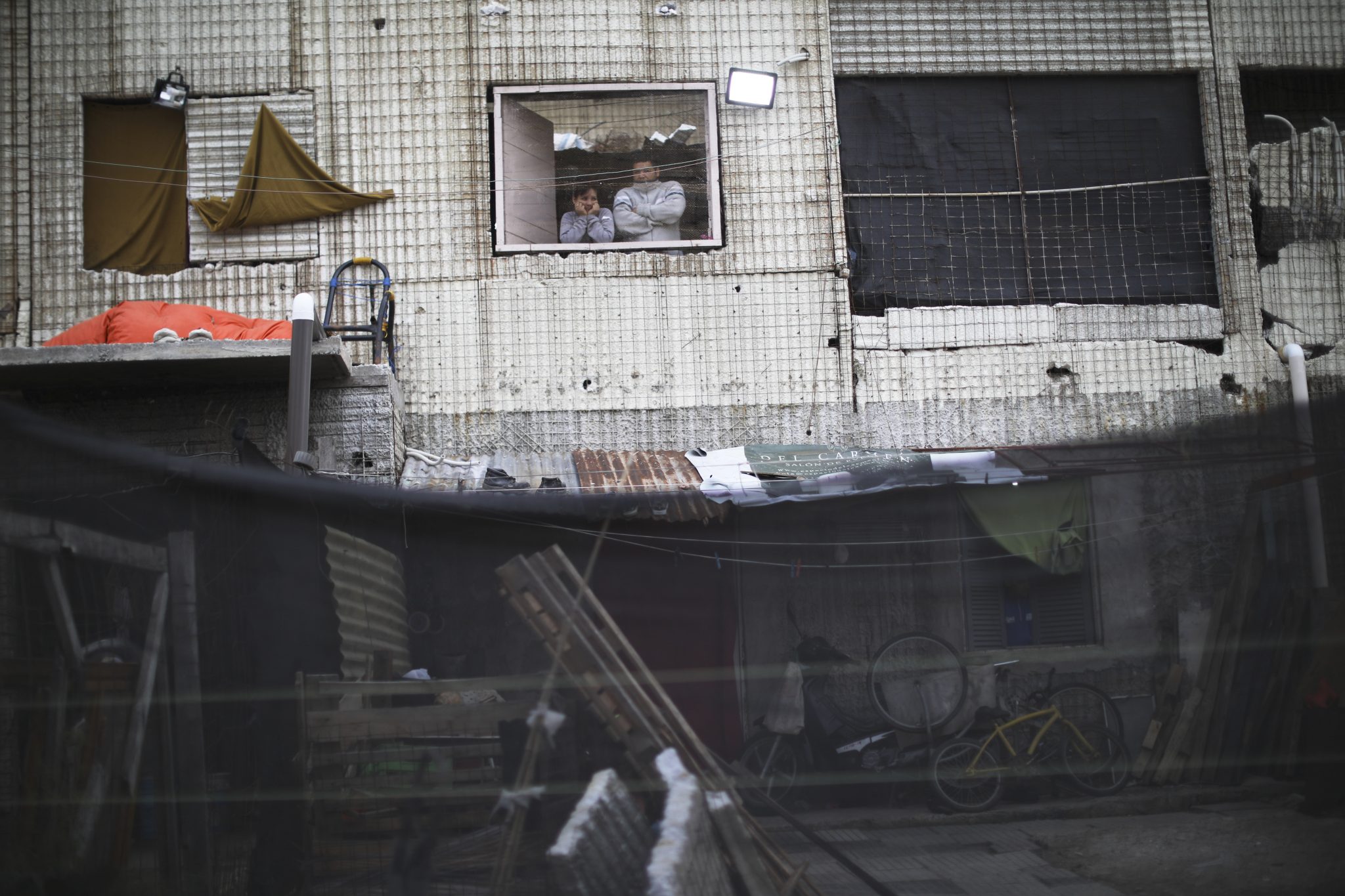 Residents look out their window in the Villa Azul neighborhood, quarantined by authorities after 50 some people tested positive for the new coronavirus, on the outskirts of Buenos Aires, Argentina, Monday, May 25, 2020. (AP Photo/Natacha Pisarenko)

BOGOTÁ, Colombia (AP) — The passenger from Spain that Sonia Sánchez picked up at the airport in Colombia’s capital in March did not seem well.

He coughed during the Uber ride in her small, red Chevrolet Spark, as he sat next to her, a precaution many of the app’s drivers use to avoid attracting the attention —and harassment— of police.

A few days later, the mother of two had a soaring fever, her relatives say. Within three weeks, she was dead—the first coronavirus patient to die in Bogotá’s working-class Kennedy neighborhood, now a hot spot of infections.

“The only thing we have of her is her ashes,” her brother, Oscar Sánchez, said.

Sonia Sánchez’s story illustrates a phenomenon emerging in Latin American nations and other developing countries: The virus initially brought to the region largely by wealthy citizens or visitors coming from Europe and the United States is now increasingly concentrated in poorer neighborhoods where residents have few means of protecting themselves. 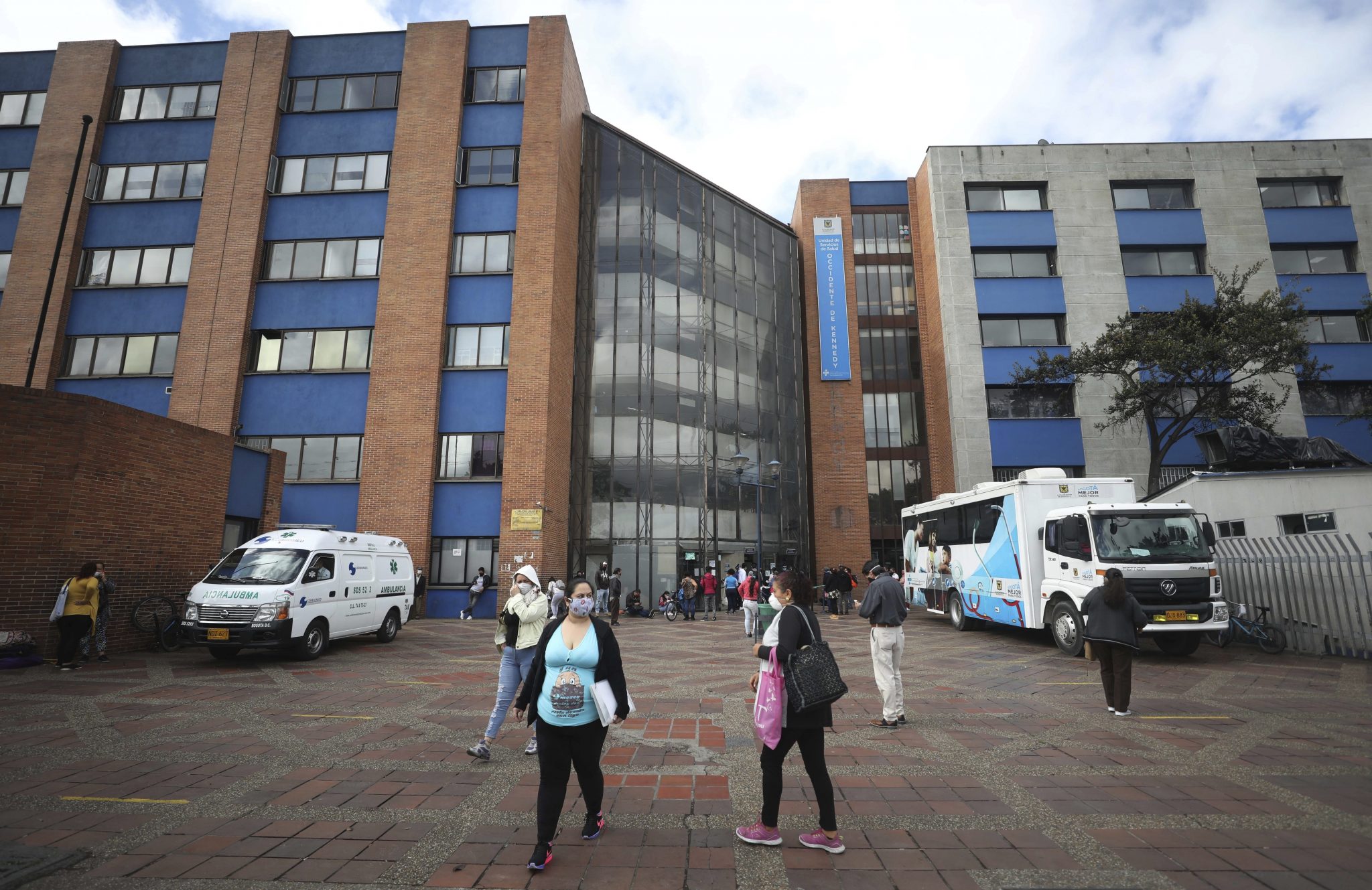 Pedestrians, wearing protective face mask as a measure to help curb the spread of the new coronavirus, walk in front of the Kennedy hospital in Bogotá, Colombia, Tuesday, May 26, 2020. (AP Photo/Fernando Vergara)

“Epidemics are not democratic at all,” said Diego Armus, a professor of Latin American history at Swarthmore College in Pennsylvania. “We know this because those who have suffered the most are the poor.”

In megacities throughout the region —from Bogotá to Sao Paulo; Buenos Aires, Argentina, to Santiago, Chile— infections first emerged about three months ago in upper-class neighborhoods. Data from city health bulletins show many of those areas have succeeded in slowing the virus, in large part because residents there are able to stay indoors, working from home or living off savings until the crisis passes.

The disease took longer to reach the poorer areas of those cities, but now infections are surging in those heavily congested neighborhoods, and hospitals are stretched. Kennedy had few infections at the end of March, weeks after the first case was confirmed in Bogota, but now has over 2,000, the highest number anywhere in the city. 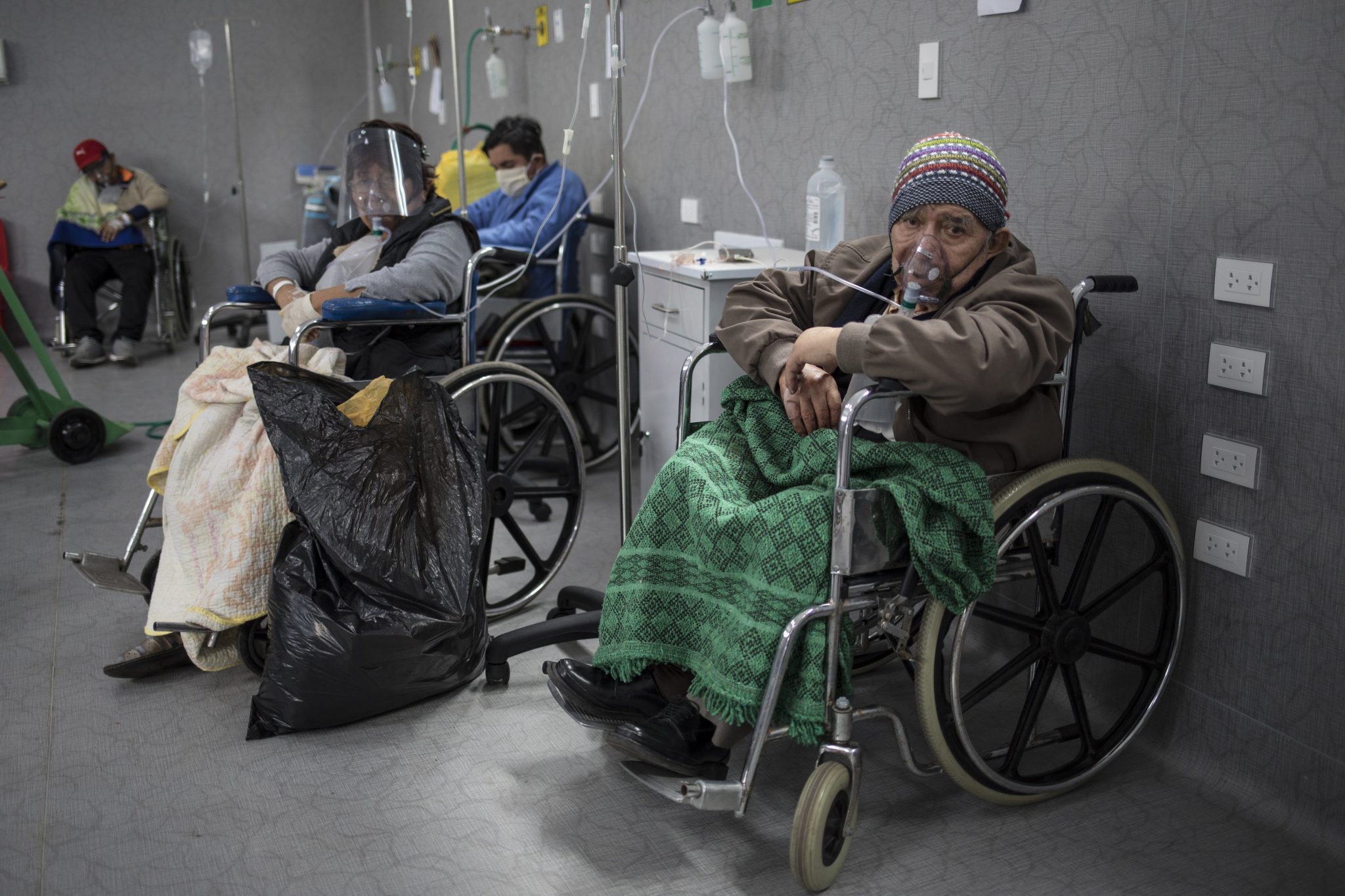 Patients testing positive for the new coronavirus breathe in oxygen in the emergency area of the Guillermo Almenara hospital in Lima, Peru, Friday, May 22, 2020. (AP Photo/Rodrigo Abd)

The migration of the disease from rich to poor has been seen elsewhere: In South Africa, for instance, the first few hundred cases were virtually all in people who had traveled to Europe; Cape Town, a city popular with international tourists, now has more than half of the country’s total confirmed cases, and its shantytowns are major hot spots. The phenomenon is especially stark in Latin America, the most unequal region in the world behind sub-Saharan Africa.

Sonia Sánchez, 53, was born in Colombia’s impoverished countryside and raised in Bogotá. She spent much of her adult life selling home appliances. After Uber entered Colombia in 2013, she decided to try her luck, paying an acquaintance to use his car. She almost always had passengers ride up front, looking to avoid the suspicion of police in a country where Uber has operated on shaky legal standing.

The earnings allowed her to rent a small apartment near Kennedy and to help support her children.

Colombia announced its first coronavirus case on March 6—a 19-year-old who had been studying in Milan. Though the crisis was gathering steam in Europe, it still felt distant in Colombia. Though the Spaniard she picked up on March 10 had a cough, Sonia didn’t immediately worry.

That changed a few days later, when she spiked a fever.

“She felt it intuitively,” Oscar Sánchez said. She told her relatives to keep their distance.

She was refused care at the local Red Cross and a hospital and had to wait another week before getting treatment. By then, she was struggling to breathe.

“Am I going to die?” she texted her brother.

By April, similar stories were surfacing in Argentina, Chile, Brazil and Mexico.

In Buenos Aires, 48% of cases were initially concentrated in four of the city’s wealthiest neighborhoods. Since then, cases in trendy Palermo have risen from around 40 in early April to 135 by May. But in working-class Flores, the increase has been sharper—from about 20 cases to 435.

Big cities in Brazil —the epicenter of Latin America’s outbreak— have seen a similar dynamic. The first case in Sao Paulo was a 61-year-old man diagnosed in late February who had been in the hard-hit region of Lombardy, Italy. He was treated at one of the city’s best hospitals in the upscale Morumbi neighborhood. Cases there have ticked up, but zones that are home to sprawling slums and working-class neighborhoods are seeing some of the largest jumps.

Latin America is home to five of the world’s 30 largest cities, and they are highly segregated. The poor often live in conditions ripe for the spread of the coronavirus: more people in smaller homes, many of whom are unable to abide by strict quarantines because they must go to work or go out to buy food. 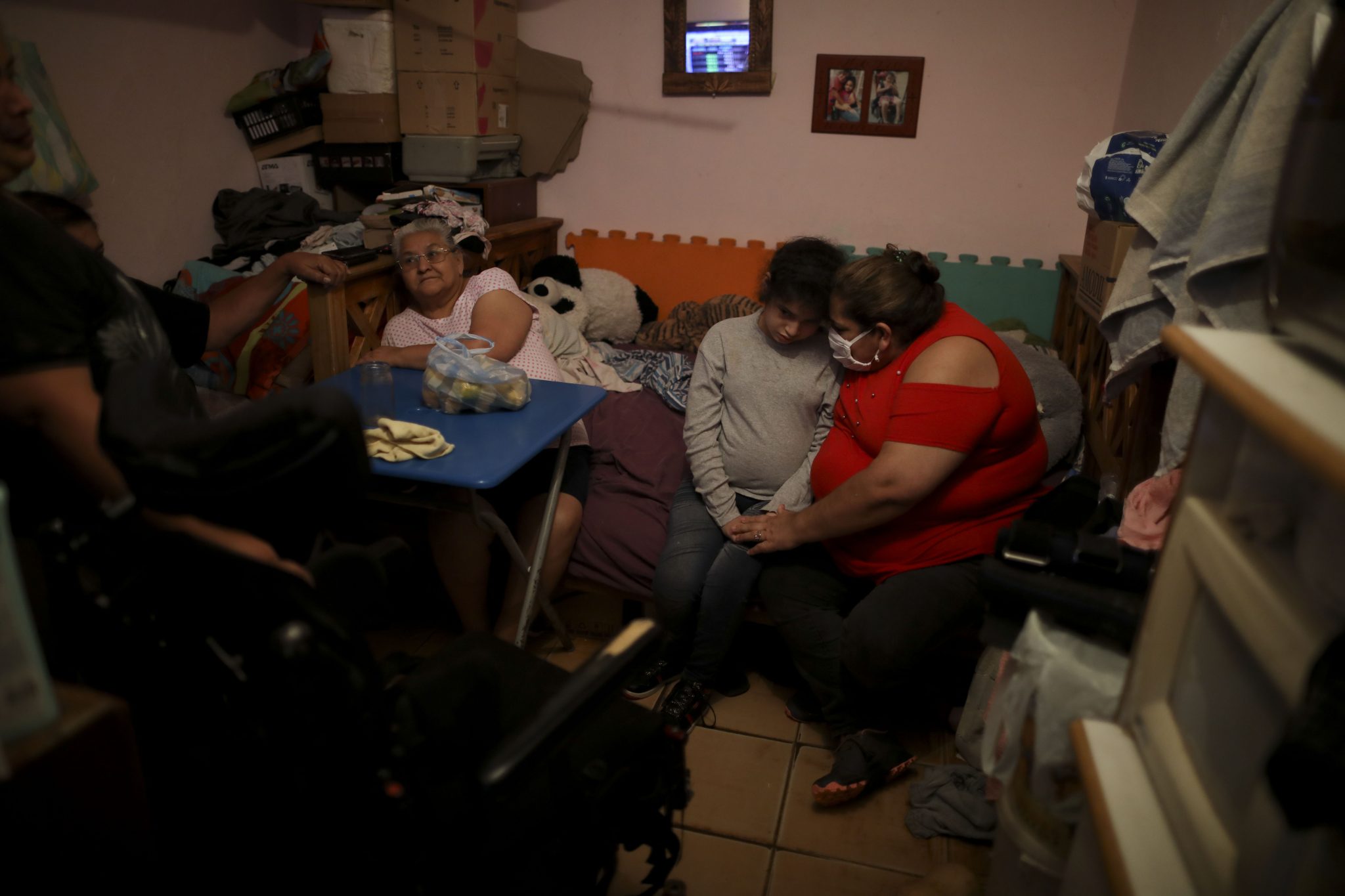 Ramona Medina, right, embraces her daughter Guadalupe, in the room they share with three other people at the Villa 31 slum during a government-ordered shutdown as a measure to help curb the spread of the new coronavirus, in Buenos Aires, Argentina, Friday, May 1, 2020. (AP Photo/Natacha Pisarenko)

“The virus is killing all of us here,” Ramona Medina, 43, who lived in Villa 31, the oldest slum in Buenos Aires, complained in an interview with The Associated Press in early May.

She died from the virus two weeks later.

As more of the poor fall sick, the hospitals that serve them are emerging as some of the most stretched. At the Bogotá hospital where the first case was diagnosed, only about 5% of all intensive care unit beds are currently occupied. But in Kennedy, the ICUs at two of the largest hospitals are operating at over 80% capacity.

For most people, the coronavirus causes mild or moderate symptoms. For some, especially older adults and people with existing health problems, it can cause more severe illness and lead to death.

“The illness is appearing in a very socially stratified way,” said Marcelo Mella, a history professor at the University of Santiago in Chile. “I think this is the dramatic visualization of a historic condition.”

In 1961, late U.S. President John F. Kennedy helped lay the first bricks in the Bogotá neighborhood that now bears his name. The original plan was to house 126,000 people; today it is home to an estimated 1.5 million.

Doctors at Kennedy Hospital, the area’s major public hospital, say years of treating gunshot wounds, injuries from assaults and a hefty load of chronic conditions means they are uniquely prepared for an onslaught of complicated virus cases. 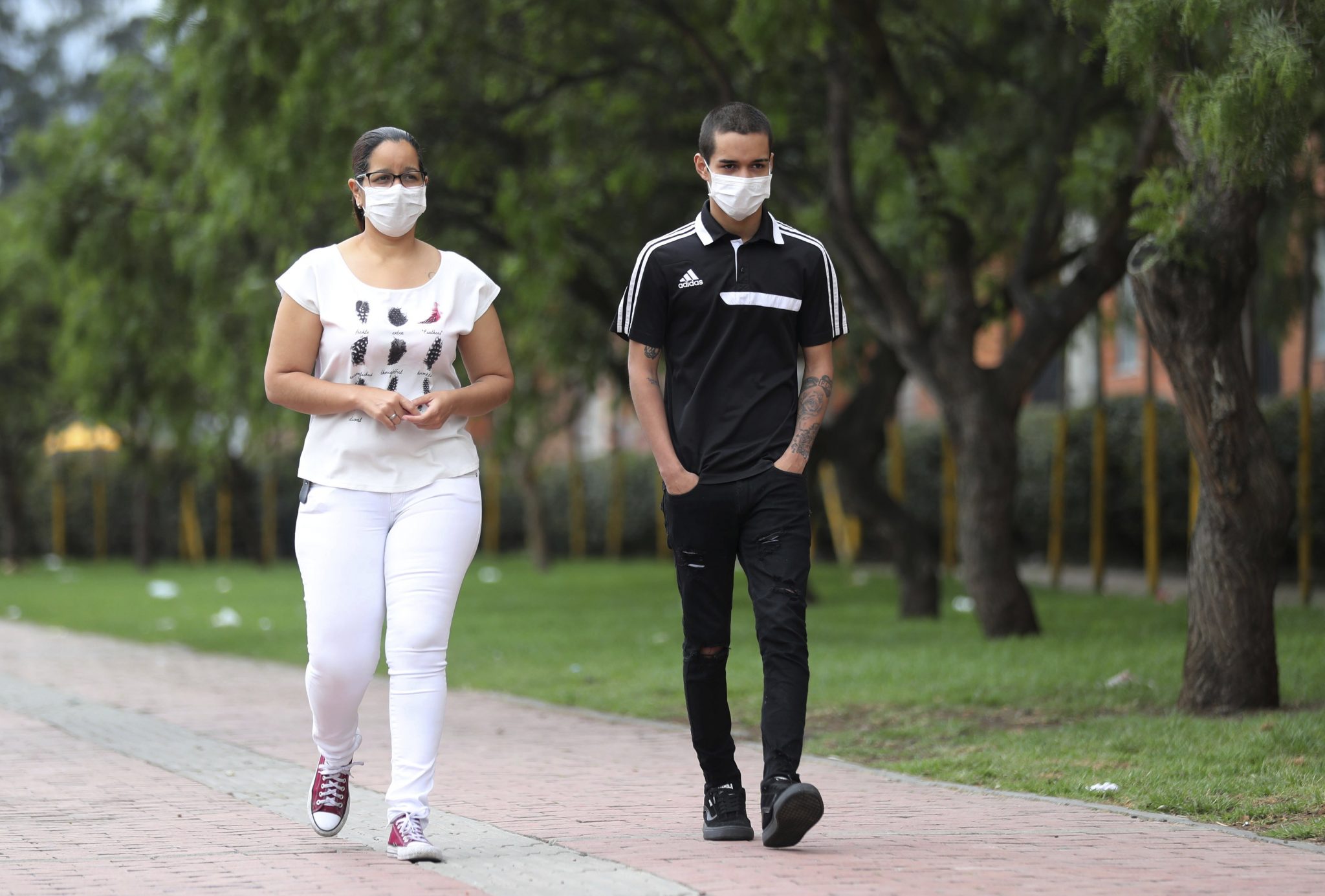 Dionis Palacios and his mother, wearing protective face masks as a precaution against the spread of the new coronavirus, walk side by side in Bogotá, Colombia, Monday, May 18, 2020. (AP Photo/Fernando Vergara)

But the patients in Kennedy include some of the city’s most vulnerable, like Dionis Palacios, 18, a Venezuelan migrant with no health insurance. He went to the hospital after experiencing chest pain and said he was taken aback by how many beds were filled.

“The hospitals are totally collapsing,” he said.

Health workers in Kennedy have protested in recent weeks, saying they do not have enough masks and protective gear—a complaint that has been echoed nationwide.

Sonia Sánchez spent her last week of life on a ventilator at Kennedy Hospital.

After her death, the family gathered in a video conference to share stories. But her brother tears up thinking about her spending those final days in the hospital alone; being taken for cremation alone.

He does not harbor anger toward the passenger the family believes infected her, but he does wonder: “Who else crossed his path?”