In Brazil’s Raging Pandemic, Domestic Workers Fear for Their Lives—and Their Jobs 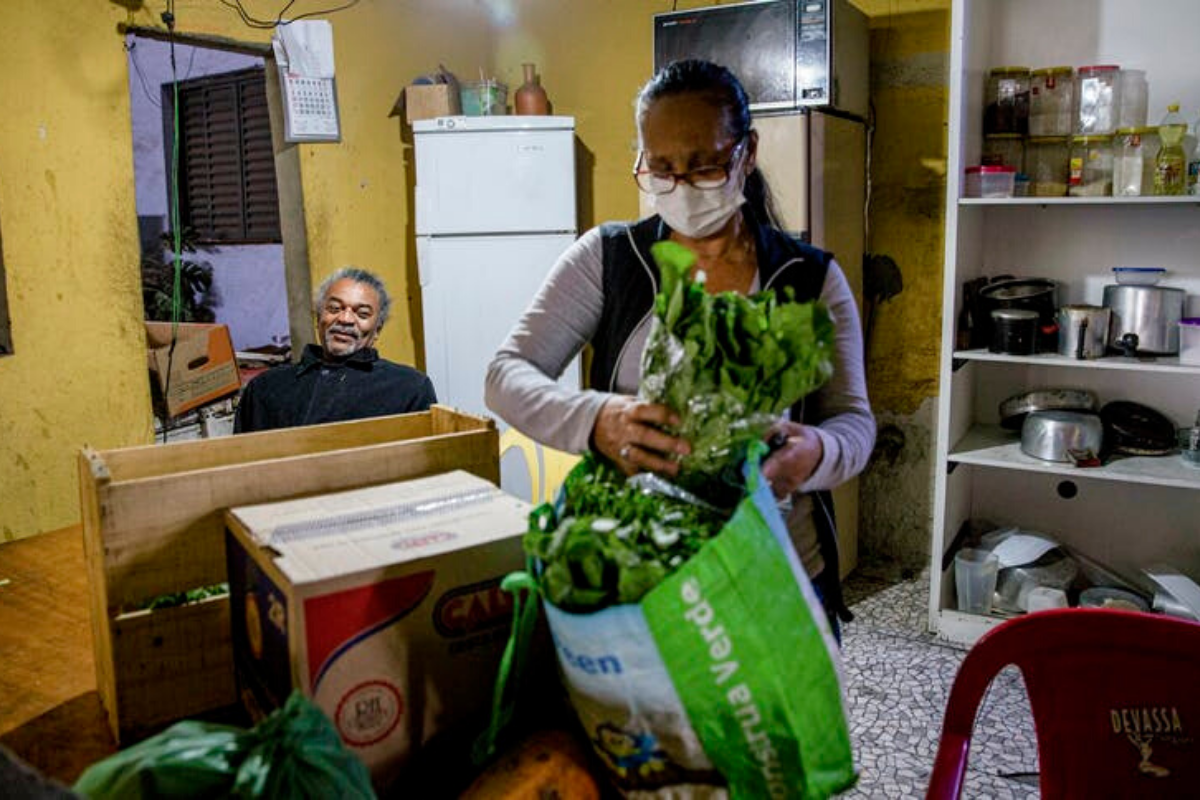 Ladijane Sofia da Concecão, one of millions of unemployed housekeepers in Brazil, accepts a food donation from a friend in São Paulo, May 7, 2020. (Photo by Alexandre Schneider/Getty Images)

Brazil has emerged as one of the worst-hit countries in the coronavirus crisis, with hundreds of thousands of cases affecting people from all backgrounds. But in the early weeks of the pandemic, in March, many victims of the disease had a similar profile: a maid infected by her employer.

The first confirmed COVID-19 patient in Brazil’s northeastern Bahia state was a woman recently returned from Italy. She infected her maid, who then infected her own 68-year-old mother.

On March 17, a 62-year-old live-in maid died from the novel coronavirus in Rio de Janeiro. Her COVID-19 positive employer had also traveled to Italy.

Domestic workers are central figures in Brazil, a hidden workforce that keeps society running. Most upper- and middle-class Brazilian households —and even many lower-middle class homes— employ an “empregada doméstica,” or domestic employee. Brazil, with 209 million people, has 6 million maids, according to the government.

Brazilian domestic workers earn US$128 a month on average —less than minimum wage— though salary and working conditions vary greatly across social strata.

Some domestic employees are live-in maids, who usually work their entire adult lives for one family. Others are paid monthly, and commute daily to work. Then there are daily maids who serve multiple households, akin to U.S. house cleaners.

The tradition of domestic help can be traced back to the abolition of slavery in 1888, as I analyzed in my recent study on the evolution of Brazilian maids and their role in society. 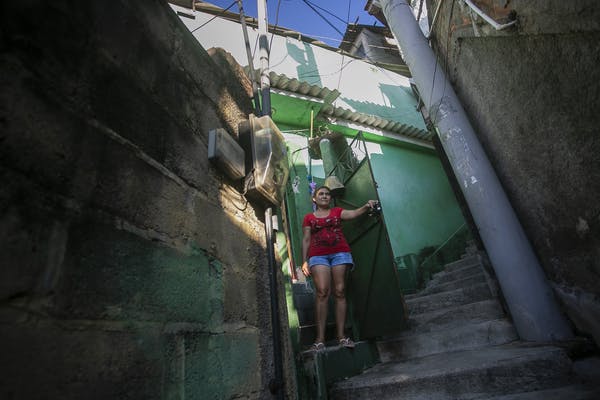 Raimunda, a day maid from Rio de Janeiro, is relying on government aid to get through the pandemic. (Photo by Bruna Prado/Getty Images)

After slavery ended in Brazil, the government left an estimated 1 million newly freed black people to survive with their own resources, which were usually none. Ninety-nine percent of black Brazilians were illiterate, according to Brazil’s 1890 census. Most took menial jobs, with black women largely relegated to live-in domestic work serving mostly white homes.

Black women still make up the majority of Brazil’s “domésticas”—63% in 2018. Domestic work is so explicitly racialized in Brazil that, in 1994, soon-to-be Brazilian President Fernando Henrique Cardoso told reporters he “had one foot in the kitchen” to signal his mixed-race heritage.

These days, having two feet in the kitchen signals a disproportionate COVID-19 risk.

But Brazilian maids of all races are vulnerable in this crisis because most generally lack employment safeguards, commute long distances and are poor, with limited access to quality health care.

All intensive care beds in public hospitals from five states —Pará, Maranhão, Rio de Janeiro, Pernambuco and Ceará— are either occupied or soon will be, according to states reports. While wealthy COVID-19 patients can pay to be transported to top private hospitals in São Paulo or abroad, poorer Brazilians rely on the overwhelmed public health system.

Brazilian domestic workers’ exposure to the pandemic is economic as well as physical.

Approximately 4.3 million of Brazil’s 6 million maids are employed informally, meaning they aren’t registered with the government. As such, labor rights —which include the $178 national minimum monthly wage and 30-day paid vacations— do not apply.

Since early March, 39% of daily maids in Brazil have been let go. They are among the estimated 15 to 20 million Brazilians expected to be unemployed by July, according to several projections. 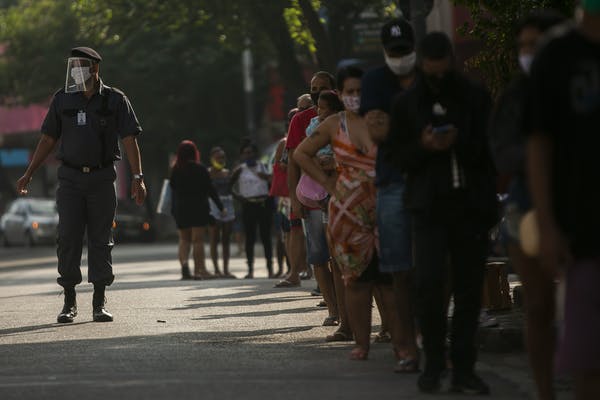 Brazilians line up for government pandemic aid outside a bank in Rio de Janeiro, May 18, 2020. (Photo by Bruna Prado/Getty Images)

Though the Office of the Federal Labor Attorney officially recommends that maids receive paid leave to stay at home during the pandemic, only 39% of regular maids and 48% of daily maids have been given that benefit, according to the pollster Locomotiva.

Some states in Brazil have listed domestic work as an essential service, allowing them to continue working—assuming their employers will still pay them.

The plight of domestic workers is one of many ways the pandemic is shining a hard light on inequality in Brazil.

Brazil’s Congress in March passed an aid bill authorizing a monthly $102 “emergency basic income” payment to the newly unemployed, including informal workers. So far, however, little more than half of the 55 million people who’ve applied have received funds, due to faulty execution and bureaucratic delays. Lack of internet access and other poverty-related factors may prevent many millions more from even applying. 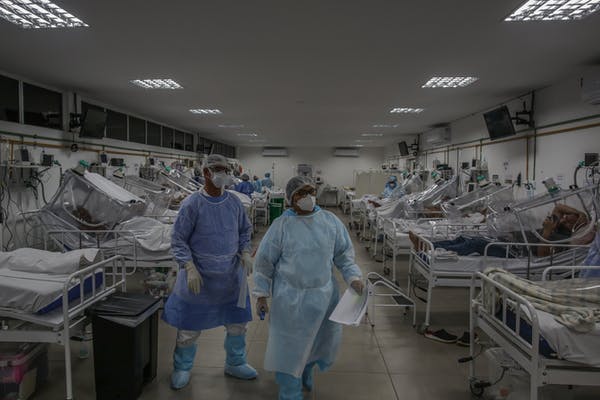 A field hospital for COVID-19 patients in Manaus, Brazil, was at capacity on May 21, 2020. (Photo by Andre Coelho/Getty Images)

Brazilian maids are suffering in this pandemic, but not in silence. A federation of domestic workers unions called Fenatrad is challenging the state decrees that established domestic workers as essential service providers, pushing instead for this high-risk population to receive paid leave.

In early May, the Brazilian Supreme Court ruled that COVID-19 qualifies as an occupational illness for the purposes of workers’ compensation. This decision applies to maids.

Communities have created their own grassroots initiatives to support domestic workers, too. An “Adopt a Daily Maid” donation campaign is underway in São Paulo’s Paraisópolis “favela” —a slum settlement that abuts an upper-class district— urging people with means to support house cleaners in the area.

And in a sign of the remarkable social mobility Brazil fostered in the boom years of the early 21st century, the first-generation college-educated children of maids started a Change.org petition asking employers to give domestic workers paid leave, advance vacation pay and isolate live-in maids who are at high COVID-19 risk. They later added a donations option to support vulnerable maids.

“Maids belong to a group of workers that represents Brazil,” reads the petition, which urges everyone raised by domestic workers to join their cause. So far, more than 90,000 people have signed on, “for the lives of all our mothers.”