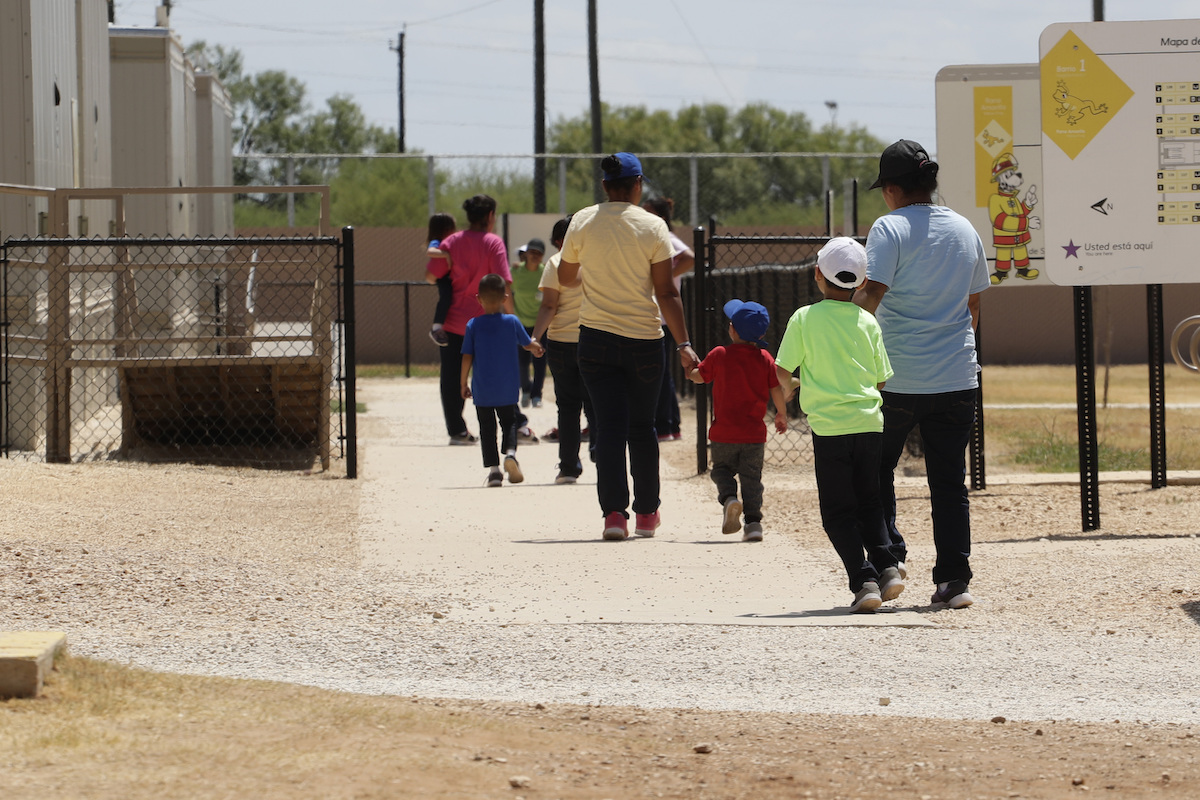 In this Aug. 23, 2019 file photo, immigrants seeking asylum hold hands as they leave a cafeteria at the ICE South Texas Family Residential Center in Dilley, Texas. The isolation of at least three families at the U.S. Immigration and Customs Enforcement’s detention center in Dilley has raised new fears of the coronavirus spreading through a facility that has long been accused of providing substandard medical care. (AP Photo/Eric Gay, File)

HOUSTON (AP) — In the isolation wing of a U.S. detention center for immigrant families, a woman from El Salvador says her 8-year-old son asks her if they are going to die.

With no toys in their room and no ability to leave the room except to use the bathroom, the boy sleeps much of the day and otherwise watches television news that includes the rising death toll from the coronavirus, according to his mother. They are quarantined after coming into contact with a staff member who tested positive for COVID-19. They have not had any symptoms of infection themselves but had not been tested as of Monday afternoon, she said.

In rooms near them are two other mothers, including one with a child that just turned 2.

“I tell him we’re not going to die,” said María, who spoke to The Associated Press on condition that her last name be withheld because she fears retribution in her country of origin if she is deported. “We feel anguished. We can’t do anything for our own lives or the lives of our children.”

The isolation of at least three families at U.S. Immigration and Customs Enforcement’s detention center in Dilley, Texas, has raised new fears of the coronavirus spreading through a facility that has long been accused of providing substandard medical care. ICE confirmed it had isolated the families but denied that they had not had access to toys.

Before her death, 21-month-old Mariee Juárez was detained at Dilley with her mother, Yazmín Juárez, in March 2018. Her mother has alleged that medical staff at Dilley mistreated Mariee’s respiratory illness.

ICE was sued earlier this year by advocates for a 5-year-old boy who had suffered a head injury before his family was arrested by immigration agents. His aunt alleged Dilley medical staff was disregarding the child’s severe headaches and hypersensitivity to sound. He and his mother were eventually released after an appeals court prevented their deportation.

Speaking by phone Monday, María said her son started vomiting Saturday after eating a few bites of chicken that she said was bad. Nurses came to their room to briefly examine him, but they did not take his temperature. Instead, one nurse tapped two fingers against his forehead to check if it was warm, she said. 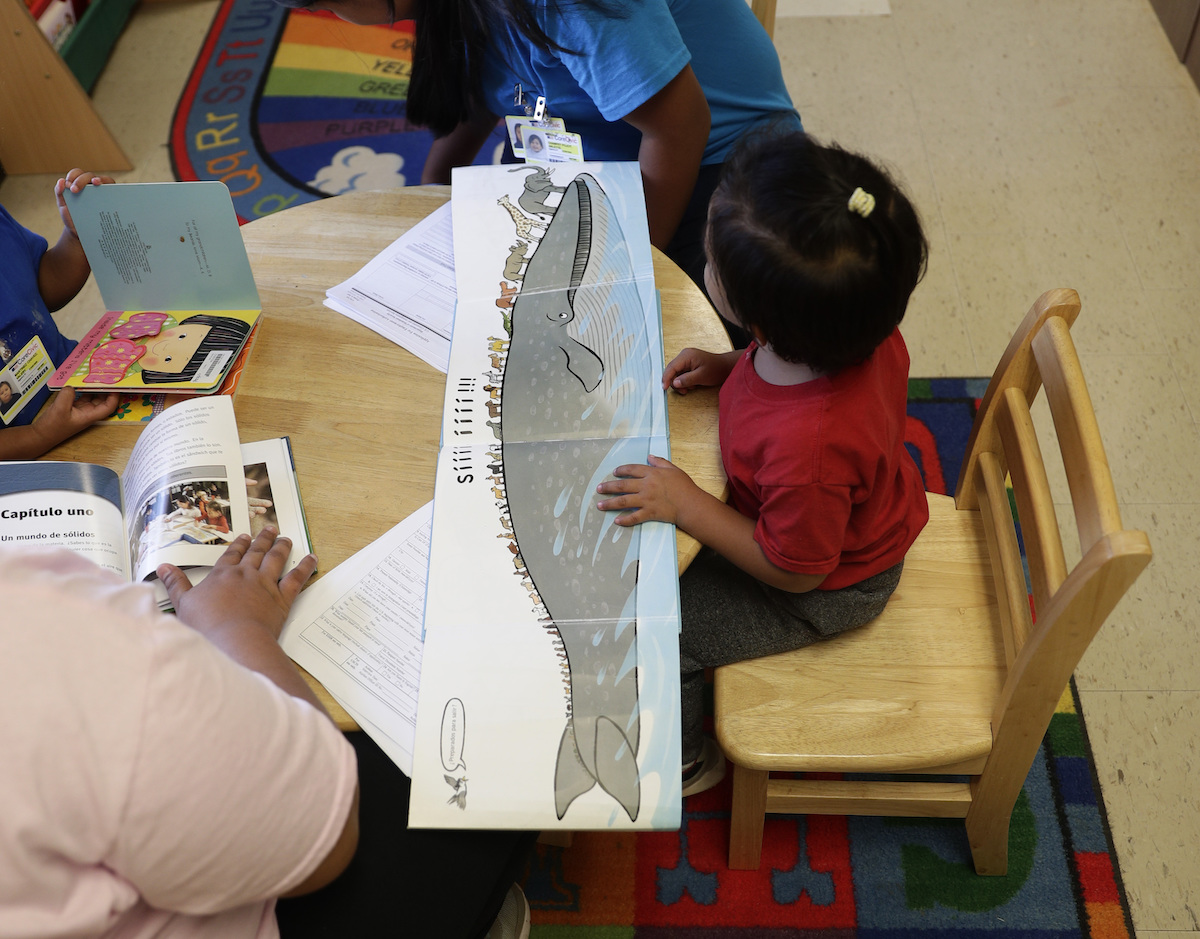 “If they can’t take care of a stomachache, how will they attend to us with the virus?” she said.

ICE and the private prison company CoreCivic, which operates Dilley, about 70 miles (113 kilometers) southwest of San Antonio, defend the care given to detainees and say they have taken special precautions to limit the spread of the virus. ICE has released 900 people considered to have extra medical risk. The agency currently detains 24,000 people, down from earlier this year as border agents have expelled most people trying to enter the United States under an emergency declaration citing the pandemic.

So far, no coronavirus cases among detainees have been reported at Dilley. But at least 2,200 people have contracted the virus nationwide in ICE’s detention system, according to the agency. Two people have died.

Gilchrist said the company is trying to determine what other employees may have had contact with the two infected people and instruct them to self-quarantine at home.

“A COVID-19 outbreak is already present in the facility or will soon be,” said Shalyn Fluharty, director of Proyecto Dilley, a legal services group that represents detained families.

About 160 people are currently detained at the Dilley facility, well short of its 2,400-person capacity. Many of those families have been held there since last year. Parents detained there were recently asked to sign paperwork that would have designated a sponsor for their children, a move that advocates allege was an attempt to separate families anew.

“There is a clear solution, which is the release of families who are currently detained,” Fluharty said. “It is by ICE’s choice alone that it is instead offering families one of two choices: indefinite detention or family separation.”

María said she and two other mothers were not told the identity of the staff member with whom they were in contact, only that they had been seen on security camera footage interacting with the staffer.

On Monday, members of the Congressional Hispanic Caucus visited Dilley to observe conditions and speak to detainees. About 15 minutes before the group came to the area where she is quarantined, Maria said, a guard brought one toy each for her son and the 2-year-old in another room.

The child now has a toy car to play with and blank sheets of paper on which he draws animals, trees and small houses, she said.