An Update on the Latino Job Situation in May 2020: One Step Forward and Two Steps Back 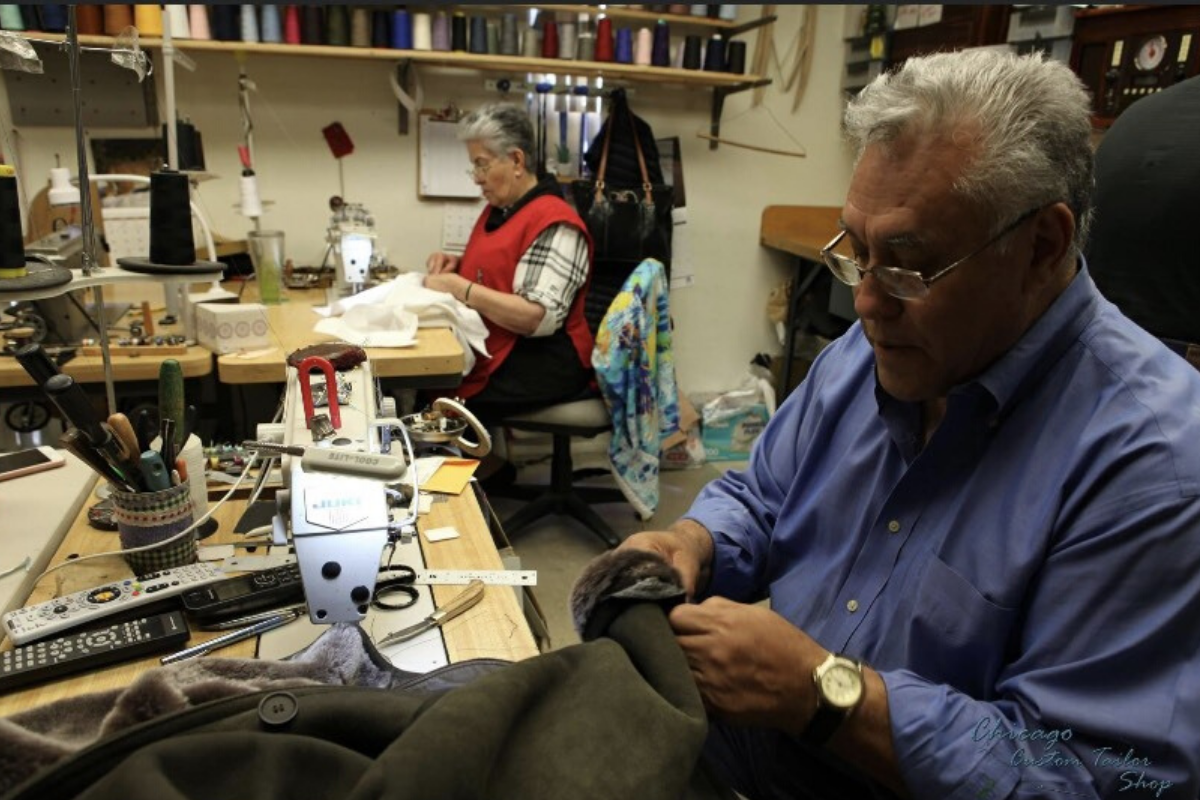 Last month, as part of my monthly blog for the National Association for Latino Community Asset Builders (NALCAB), I provided an overview of the hemorrhaging job loss among Latinos. Compared to other groups in the country, Latinos had the highest unemployment rate at 18.7 in May and sustained the highest percentage decline (20.2%) in jobs lost between February and April, translating to 5.7 million fewer Latinos working. The research brief that I prepare here provides an update on what occurred in the following month

I draw here on data from the May 2020 Current Population Survey (CPS) to carry out the analysis below.

Overall, while there has been a shift in the ledger from massive job declines in April to slow growth in May, the job fortunes of Latinos continued to be worse in many respects compared to other groups.

As in April, Latinos continued to have the highest unemployment rate in May with 17.5% of the civilian labor force without a job, though the rate eased downward from the earlier month (Figure 1). Whites had the lowest jobless rate at 10.8%, down a little more than two percentage points from the earlier month. In contrast, unemployment rose a bit for African Americans and Asians and Pacific Islanders. 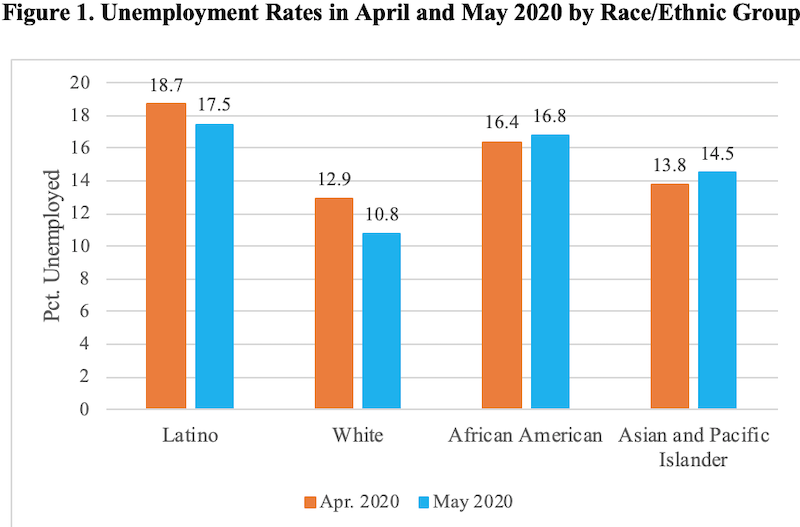 We observed last month that Latino men and Latina women had the highest unemployment rates compared to their gender counterparts from other racial groups. There has been a slight change.  In particular, the unemployment rate of Latino men (15.8%) was now slightly below that of African American men (16.1%) in May (Figure 2). However, the situation was much less favorable for Latinas with approximately one-fifth without a job in May, a slight dip from the 20.8% unemployment rate in April. Whites (9.7%; and 11.9%) enjoyed the lowest two lowest jobless rates among all groups. 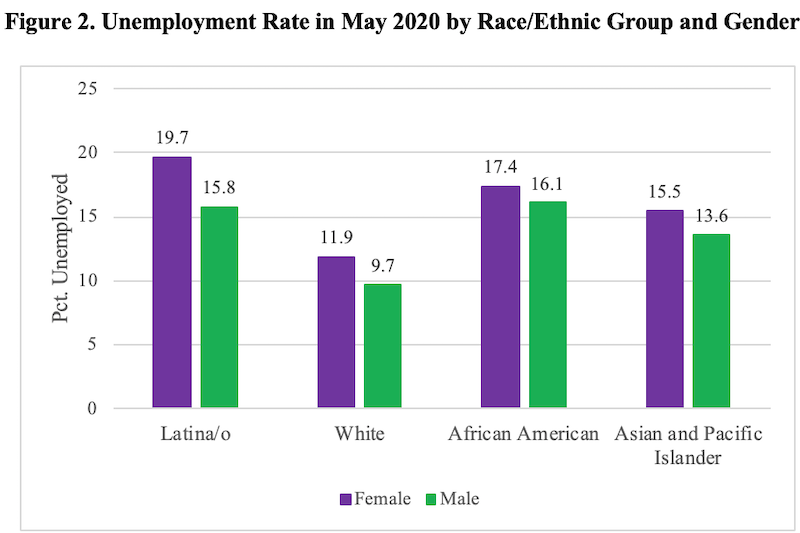 While there were fairly narrow differences along the lines of nativity among Latinos in the job situation last month, there was some change in May. As they did in April, foreign-born Latino men had the lowest unemployment level in May, at 14.0%, nearly three percentage points below that in April (Figure 3). In part, this reflects the high concentration of Latino immigrants among workers on the front lines and employed in essential industries. The jobless rate of U.S.-born Latinos remained unchanged. Latino women, regardless of where they were born, continued to have elevated rates of unemployment in May, although native-born Latinas saw a slight improvement as their unemployment dropped slightly from 20.3% in April to 18.8% in May. 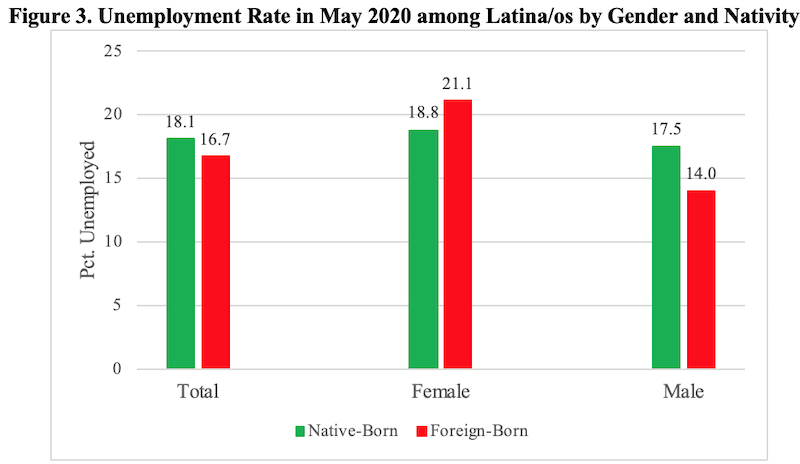 The analysis that I conducted last month examined employment change between February and April 2020. During that two-month period, the U.S. lost 24.7 million jobs with 23% of those jobs previously belonging to Latinos. Between April and May, the nation witnessed a slight uptick of 4.1 million jobs. Nonetheless, consistent with the results that I have overviewed above, Whites have been disproportionately the beneficiaries of the country’s job growth over the last month. Thus, of the nation’s 4.1 million new jobs, Whites held nearly 3.3 million of these, or four of every five jobs that the country added between April and May (Figure 4). Latinos, who sustained the greatest job loss between February and April, were next in line, albeit much further behind Whites, with an increase of 644,000 new jobs, or one of every six new jobs between April and May. The employment growth of African Americans (155,000) and Asians and Pacific Islanders (5,500) was much smaller. 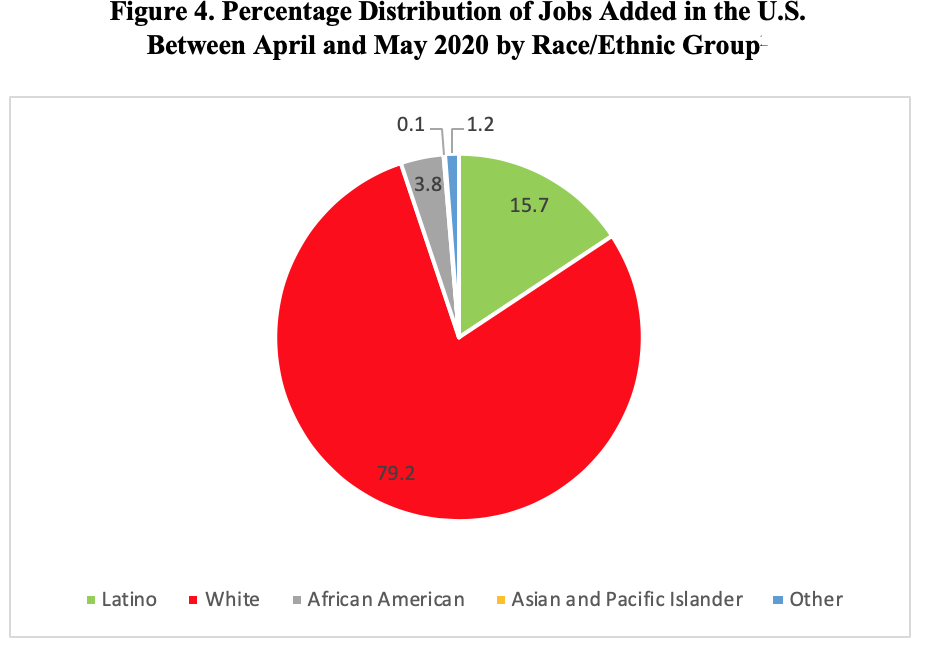 The big news flash since last month is that the employment situation changed from massive job loss in April to small job growth in May. Yet, Whites largely dominated the nation’s growth in employment over the last month. Latinos continued to have the highest unemployment rate in the country with Latinas being the most likely to be without a job. While there were some improvements in job growth for Latinos with 644,000 more persons having a job in May than in April, we need to keep in mind that this small bump does not make a dent in the massive job loss that Latinos have sustained since February. 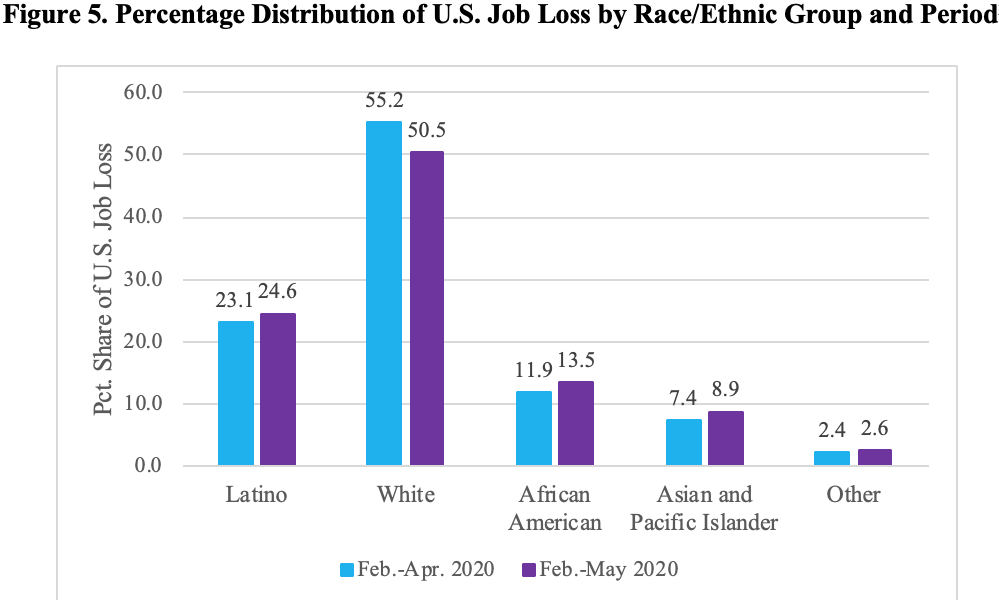 Last month we observed that Latino jobless levels varied greatly across the country. There was a cluster of states where Latinos had relatively low levels of unemployment, including several with meatpacking operations. On the other hand, Latinos were the most likely to be unemployed in Nevada, where 41% of Latinos in the civilian labor force did not have a job. Other states with high levels of unemployment were clustered in the Northeast, Midwest, and South regions.

One thing that has not changed, however, is that Nevada continued to have the highest Latino jobless rate at 35.2%, down from 40.8% in April. More than one-fourth of Latinos were unemployed in a dozen other states.  The 13 states with the highest percentages of Latinos without work are clustered primarily in the Northeast and Midwest regions.  Other states that join Nevada with unemployment rates above 25% include Ohio (33.7%), Louisiana (29.9%), Hawaii (29.4%), Vermont (28.0%), Massachusetts (28.0%), and New York (25.6%). The 13 states with the highest Latino unemployment rates include states that were ravished by COVID-19 including Louisiana, Massachusetts, New York, Rhode Island, Illinois, New Jersey, and Pennsylvania as well as those that have the highest overall unemployment rates —above 15%— in the country including Nevada, Hawaii, Massachusetts, Rhode Island, Illinois, and New Jersey. 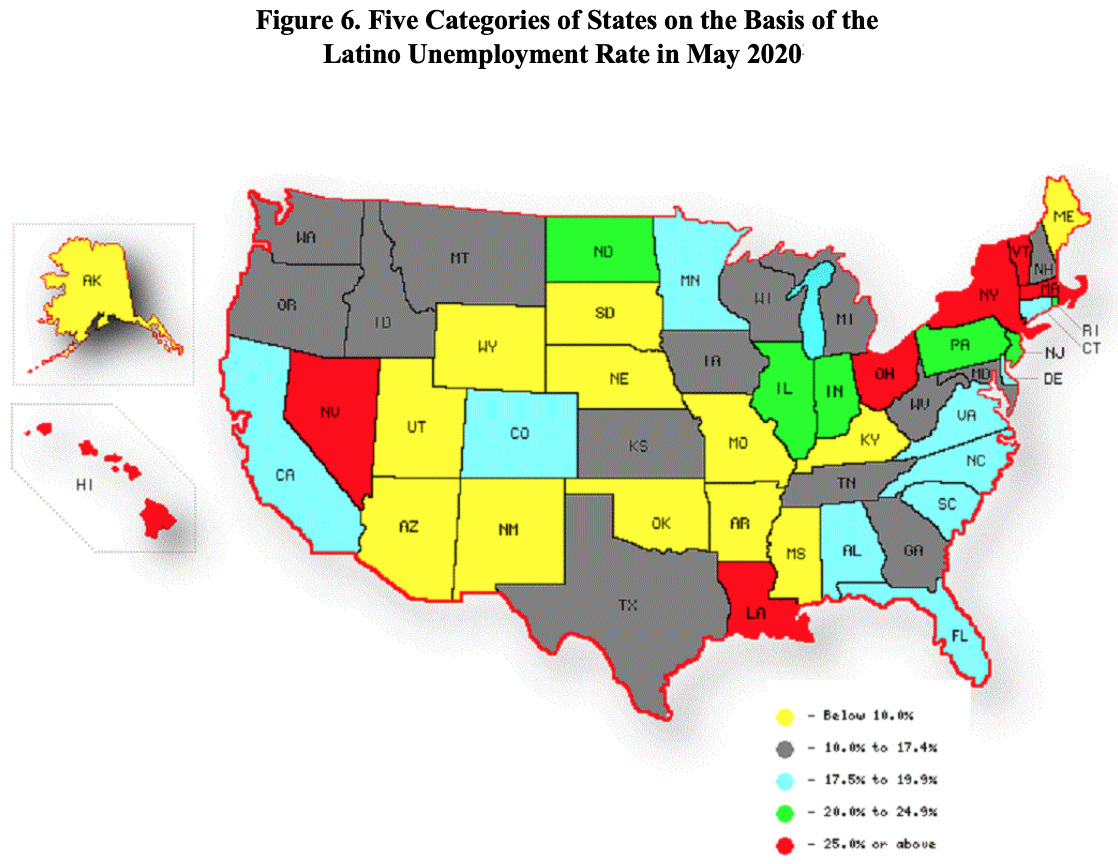 It is clearly the case that the recovery of the U.S. economy will take a long time. Claims of things being better than in April are not very reassuring as job loss since February is still very steep. As the analysis that I have presented here shows, Latinos and other people of color are particularly falling behind Whites in making up the job loss sustained since February.  The analysis also shows that Latinos face the highest levels of joblessness in areas that have been devastated by COVID-19 as well as those whose overall economies have been suffering greatly.

Unfortunately, as public health experts predicted, as the country has widely opened up for business, there has been a significant surge of new COVID-19 cases in 22 states, including Arizona, Florida, and Texas. It is clear that additional help is needed to sustain the nation’s rank-and-file workers. Lamentably, the Senate has withheld support for the Health and Economic Recovery Omnibus Emergency Solutions Act (HEROES), which would contribute greatly to easing the devastating financial problems of workers. Many people are without work and many others, lucky enough to hold a job, face risks contracting the virus in the workplace and in their environs as the pandemic persists. Our people are our greatest asset. We need to all take measures to keep ourselves and our loved ones safe. Please do not let your guard down. We are depending on you. ¡Saludos!

Rogelio Sáenz is professor in the Department of Demography at the University of Texas at San Antonio. He is co-author of the book “Latinos in the United States: Diversity and Change.” Sáenz is a regular contributor to Latino Rebels. He can be reached at rogelio.saenz@utsa.edu and on Twitter at @RogelioSaenz42.