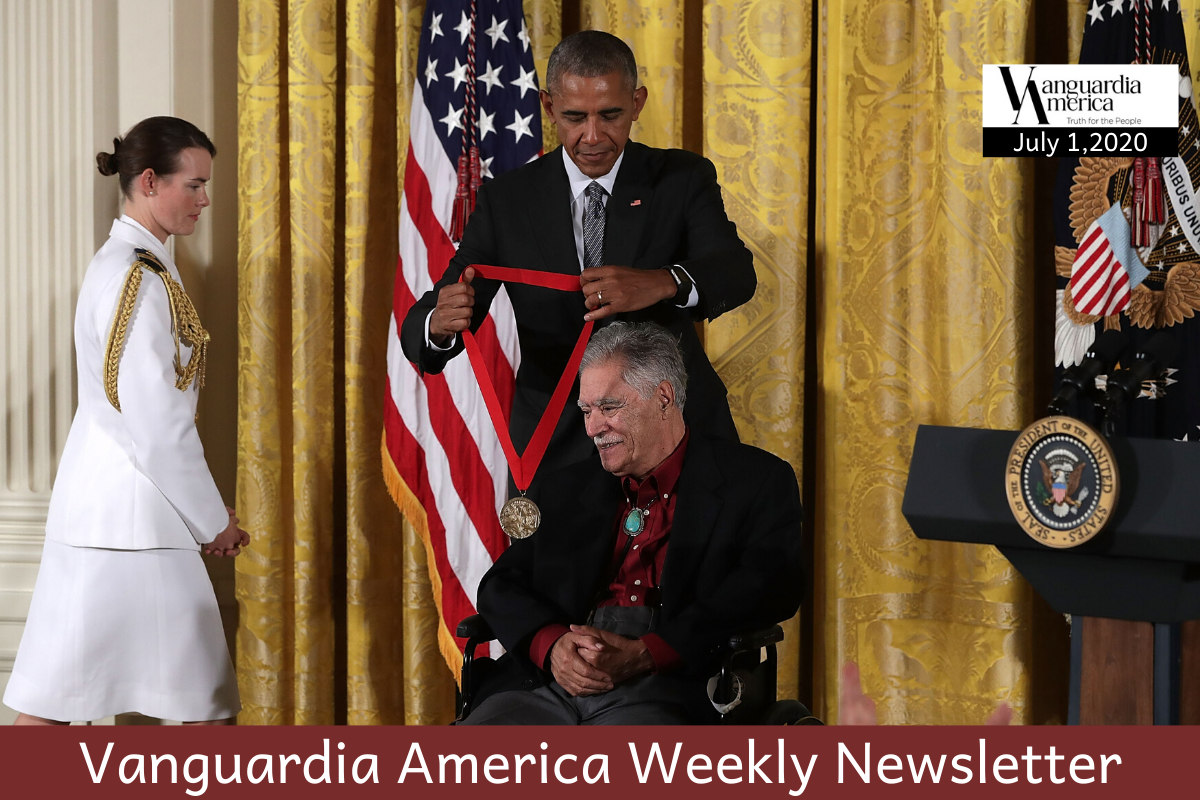 Rudolfo Anaya, the author of award-winning novels, such as Bless Me, Ultima, Tortuga, and Alburquerque has died.

A family member said the author died at his home after a long illness. He was 82.

Anaya is one of the giants of Chicano literature. He published numerous books of poetry, short stories, nonfiction, plays and children’s books during his decades-long career.

His most famous work is Bless Me, Ultima, a coming of age story about a Chicano boy who befriends a curandera —a folk healer— in 1940s rural New Mexico. Anaya grew up in a small town in New Mexico. Bless Me, Ultima,  once banned in Arizona where critics claimed the book advocated the overthrow of the U.S. government, was made into a film in 2012.

New Mexico Gov. Michelle Lujan Grisham said in a statement, “Through his indelible stories, Rudolfo Anaya, perhaps better than any other author, truly captured what it means to be a New Mexican, what it means to be born here, grow up here and live here.”

Phoenix-based actor-director Ricky Araiza said, “Bless Me, Ultima,  forever changed me. His poetic storytelling of the complexity of Latinx lives during WWII America and the struggles of cultural and spiritual identity is something we continue to unpack to this day. Thank you, Rudolfo, for your vision and your voice. Rest in power, maestro.”

President Barack Obama awarded the author the National Humanities Medal in 2016. Anaya received an American Book Award in 1980 and the NEA National Media of Arts Lifetime Honor in 2001.

U.S., Brazil and Mexico Combined Account for More Than 40 Percent of All COVID-19 Deaths Worldwide

The United States, Brazil and Mexico have recorded a total of more than 211,000 deaths combined from the COVID-19 virus accounting for 42 percent of the world’s dead from the virus as of July 1.

On Wednesday, the U.S. topped 127,000 deaths, Brazil was at more than 59,000 dead, and Mexico had reached nearly 28,000 fatalities based on data reported by the New York Times. The number of people worldwide who’ve died of the coronavirus is more than 510,000.

Despite the rapid growth in COVID-19 deaths and hospitalizations, the presidents of the U.S., Mexico and Brazil continue to press for a quick reopening of their nations’ economies.

Amid reports that 2,500 migrants have contracted COVID-19 in federal custody, a judge Friday ordered the release of hundreds of migrant children.

U.S. District Judge Dolly Gee has ordered children being held with their parents in three family detention centers in Texas and Pennsylvania be released by July 17. Gee told Immigration and Customs Enforcement (ICE) officials they must release the children “with their parents or sent to family sponsors,” the Washington Post reports.

In her written ruling, Gee said the detention facilities are “on fire” and “there is no more time for half measures.”

ICE officials say the agency has released “more than 900 detainees with increased medical risks,” according to The Texas Tribune.

Gee’s order does not apply to the children’s parents. Immigrants rights activists worry ICE officials may force the parents to choose between the deportation of the entire family or separation from their children.

Attorney Amy Maldonado, who works with detained families, told the Associated Press, “[ICE needs] to make the sensible choice and release the parents to care for their children.”

Hundreds turned out Friday in Tucson for a vigil honoring the memory of 27-year-old Carlos Ingram-Lopez, who died in police custody in April.

News of Ingram-Lopez’ death was not released by police authorities for two months. Three officers involved in his arrest have resigned and the city’s police chief offered his resignation, but it was not accepted by Mayor Regina Romero, who said she wants the chief to stay and help fix the department’s problems.

The autopsy report released by the Pima County Medical Examiner’s Office said, “Ingram-Lopez had cocaine in his system and went into cardiac arrest while restrained,” but the cause of death was listed as “undetermined,” according to the Arizona Daily Star.