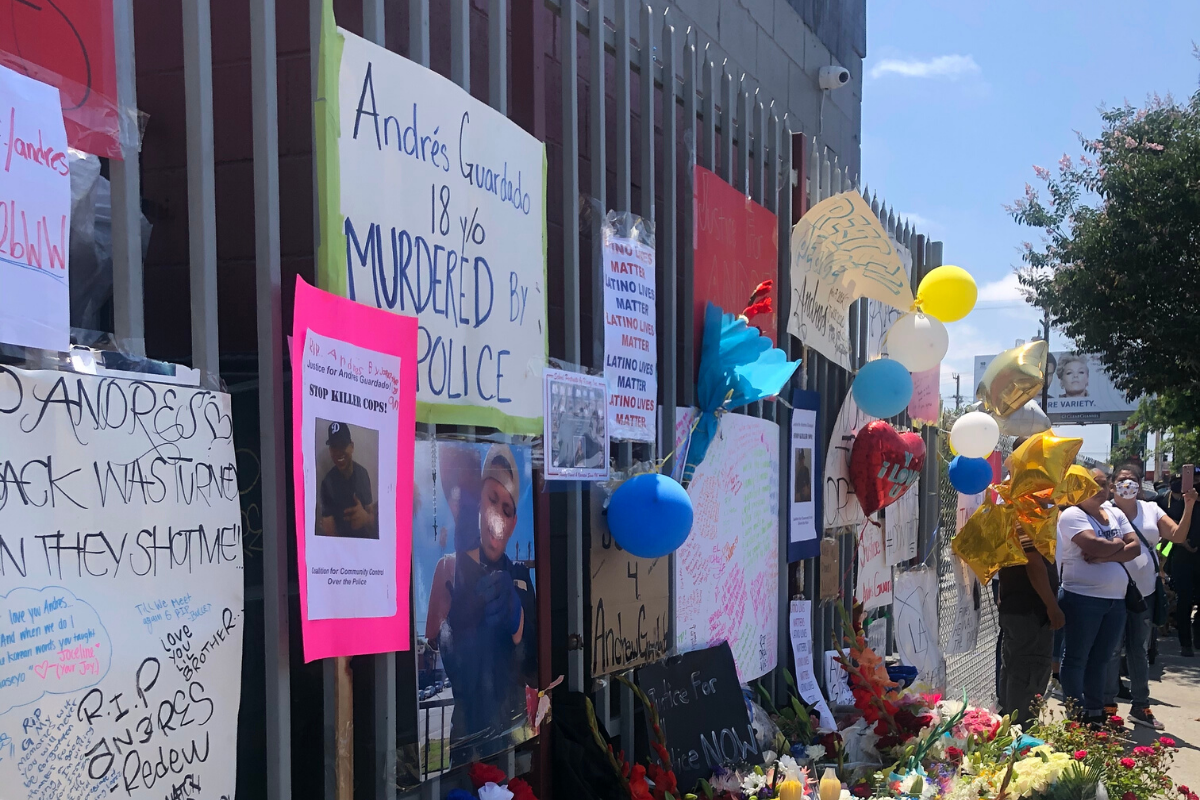 In America, police brutality is often viewed in a Black and white narrative leaving Indigenous, Latino, and other people of color out of the conversation.

In 2016, the deaths of Philando Castile and Alton Sterling dominated the news cycle. However, in the same week, five Latinos were killed by police and hardly anyone knows about them. Not only was the media negligent in reporting those cases (showing a severe case of bias), the lack of attention creates an environment of ignorance. People simply don’t know or care to know that it’s happening on a larger scale resulting in lower numbers protesting their deaths.

While most shooting deaths of Latinos at the hands of police don’t make national headlines, it’s worth noting that protests focused on state-sponsored violence against the Latino community have been happening since the 1940s. The majority of Americans neglecting our communities comes partly from the presumption that most Latinos are viewed as foreigners.

More recently, several Latinos, as well as several Black men, have been murdered by police in the span of just a few weeks in Houston. Many of these deaths occurred prior to the murder of George Floyd in Minneapolis. Of the more prominent cases in Houston, the death of Nicholas Chávez has created public outcry because of cell phone video showing him being shot by at least five Houston police officers as he was on his knees with his hands up.

As we have seen time and again, a lack of transparency is how many of these incidents go underreported, resulting in a lack of public outcry. Activists in Houston have been demanding the release of bodycam footage from no less than 70 officers showing evidence of the murder. As cable news hailed Houston police chief Art Acevedo as a hero after the death of George Floyd, what they failed to address is the lack of transparency and accountability in his own department

This level of tone-deafness has never been more evident.

Where Is the Latino Outrage?

Many Latinos have expressed their discontent with the lack of outrage when Latinos are murdered by police. Some have even adopted the white supremacist language that attacks the Black Lives Matter movement. What many of you don’t realize is that parroting the words of racists who use the “All Lives Matter” hashtag as a way to discredit BLM is beneath every single Latino in America—whether you’re a Cuban, Mexican, Puerto Rican, Dominican, or whatever.

If you want outrage, if you want to get the attention of those who commit state-sponsored murder on our streets, then you’re all going to have to start getting up and doing the work. We may all be different nationalities, and we all share our own nationalism for our countries of origin, but in America, we’re simply Latinos (or Hispanic). We need to embrace that.

In order for us to have the enthusiasm and organization that the Black Lives Matter movement does, we have to set aside our differences and come together as one. If that means embracing a colonialist label to do it, then so be it. That’s how they know us anyway. If we start making noise using their language against them, they’ll start paying attention soon enough. Do you think cops care where we’re from before killing us? No, they don’t. All they know is we’re Latinos.

Did César Chávez and Dolores Huerta doubt to speak up for everyone working in the fields? No, they didn’t. It would not have played out so well if they only fought for Mexicans. They knew they had to be inclusive to garner the power of all farmworkers to achieve what they did. We also have to do the same in addressing police brutality and social inequality.

Those that came before us laid the groundwork for us to continue their work. They gave us the blueprint. It’s time to honor them by pushing forward and coming together.

But it’s not a matter of organizing either. Check your local communities. It’s likely that protests are being organized. If you can’t find protests already planned, contact the closest activist group and ask them for help. The hardest thing in the world is seeking out assistance, but activist groups will gladly help you out and there’s nothing wrong with asking for anything.

According to the Fresno Bee, in California, “Latinos make up 39% of the state’s population but represented 46% percent of the of fatal police encounters in the state—just slightly behind the rate at which Black Californians were killed by police per capita.” In Texas, Arizona, and New Mexico you’ll find similar numbers. Yes, Latinos are killed nearly as often as Black folks, but there isn’t a lack of outrage as many of you would suggest. 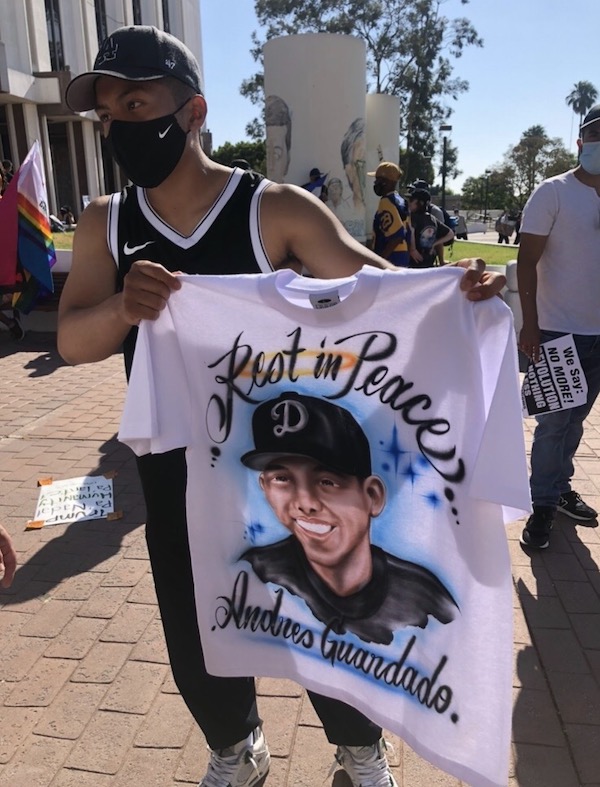 In fact, Black Lives Matter has been picking up the slack for the Latino community’s limited attendance at protests. At the end of the day, all Latinos have to do is show up and support BLM because they’re supporting us.

The most recent deaths of Latinos at the hands of police have garnered widespread attention and it’s not for the lack of trying. Andrés Guardado was working as an informal security guard for the Freeway auto body shop in Los Angeles. According to the sheriff’s department, deputies recovered an unregistered handgun loaded with a large-capacity magazine. A claim that has been widely disputed by witnesses.

Witnesses say that Guardado ran into a side alley next to the shop. Knowing it was a dead end, he then got on his knees and put his hands in the air. Witnesses also say that regardless of his position, he was shot in the back multiple times, a fact his autopsy confirmed. It’s also worth noting that police confiscated all video footage from the body shop where he was working. If Guardado was in fact unarmed, it means police planted a weapon, which is not unheard of.

Also in Los Angeles, two Latino men with similar names were killed by the LAPD. Daniel Hernández, 38, was killed by police on April 22 after police responded to a multi-car traffic accident. In this case, police say he was armed with a box-cutter, but witnesses also say he was shot from a non-threatening distance of about 15 feet. The officer who murdered Hernández is known as a firearms influencer and the daughter of powerful police union figure Jamie McBride.

In a separate case, Daniel Hern´åndez Bravo, 28, was killed by the LAPD after a minor traffic incident. In this instance, the police also claimed a handgun was recovered at the scene. However, initial reports from a spokesperson from the LAPD made no mention of a gun being recovered from the scene. Considering that this shooting also took place in an area local police refer to as “Shootin’ Newton,” the idea that a gun may have been planted should not be lost on anyone.

On July 4, police murdered James Porter García, who was parked in his own driveway. Police in this case also claimed he was armed and refused to drop his weapon. However, bodycam footage later released by Phoenix police didn’t show the moments that led up to the shooting. Video posted on Facebook by a local councilman shows that commands by the officers instructed Garcia to stop moving. There was no mention of a weapon until after the shooting occurred.

Carlos Ingram López was killed by Tucson police on April 21, in a similar tactic that killed George Floyd. Police pinned Ingram Lopez down for about 12 minutes as he yelled “I can’t breathe” and called for his grandmother. He went into cardiac arrest and died on the scene.

Sean Monterrosa was killed in by Vallejo police, a California suburb in San Francisco, after officers responded to a call of looting in the area. Police confirmed that he was unarmed and was kneeling with his hands above his waist at the time.

José Soto, 27, was shot to death by a SWAT team on April 2 after refusing to surrender to his parole officer. As he left his mother’s home in Manchester, he was murdered despite not carrying a weapon and putting his hands in the air.

Erik Salgado was killed by California Highway Patrol in East Oakland after officers responded to calls of looting. Salgado was driving with his pregnant girlfriend when officers fired at their vehicle killing him. His girlfriend was shot in the stomach and had a miscarriage.

Major media outlets have a somewhat tone-deaf tendency to look at police brutality and race issues in black and white, leaving many Latinos feeling like we are being excluded from those conversations. As someone who feels like that from time to time, I too can’t help but think we are overlooked. However, it’s not like that at all.

We have to look at it from a broader perspective.

No, it shouldn’t be on us to have to expand upon what is being reported in the media. However, it is incumbent on us to pay attention to who protest groups are speaking for since so many journalists keep dropping the ball. We all know that Latinos in America are impacted by police brutality at a very high rate. And while Black folks are more likely to die at the hands of police, most of those same Black folks are speaking up for Latinos and Indigenous victims too.

I’m not gonna lie. Seeing protesters from every stripe in cities across the country speaking up for police reforms and to end police brutality is heartening. It shows that the country might finally be catching up to what we’ve been saying for decades: it’s not just about the over-policing of Black and Brown communities—it’s also about systemic and oppressive systems that plague low-income neighborhoods, stunt economic growth, and impede progress.

Despite what yours or my feelings may be, spouting anti-Black racism in response to Black Lives Matter isn’t a solution, especially when they’re speaking up for us. Instead, join them and all the other protest groups, like the Brown Berets, and start making some noise. It’s on you.

Arturo is an anti-racist political nerd. He is an upcoming author, journalist, advocate for social justice, and a married father of three. He is a top writer in racism on Medium and a regular contributor to Latino Rebels. If you’d like to learn more about the issues covered here, follow him on Twitter.