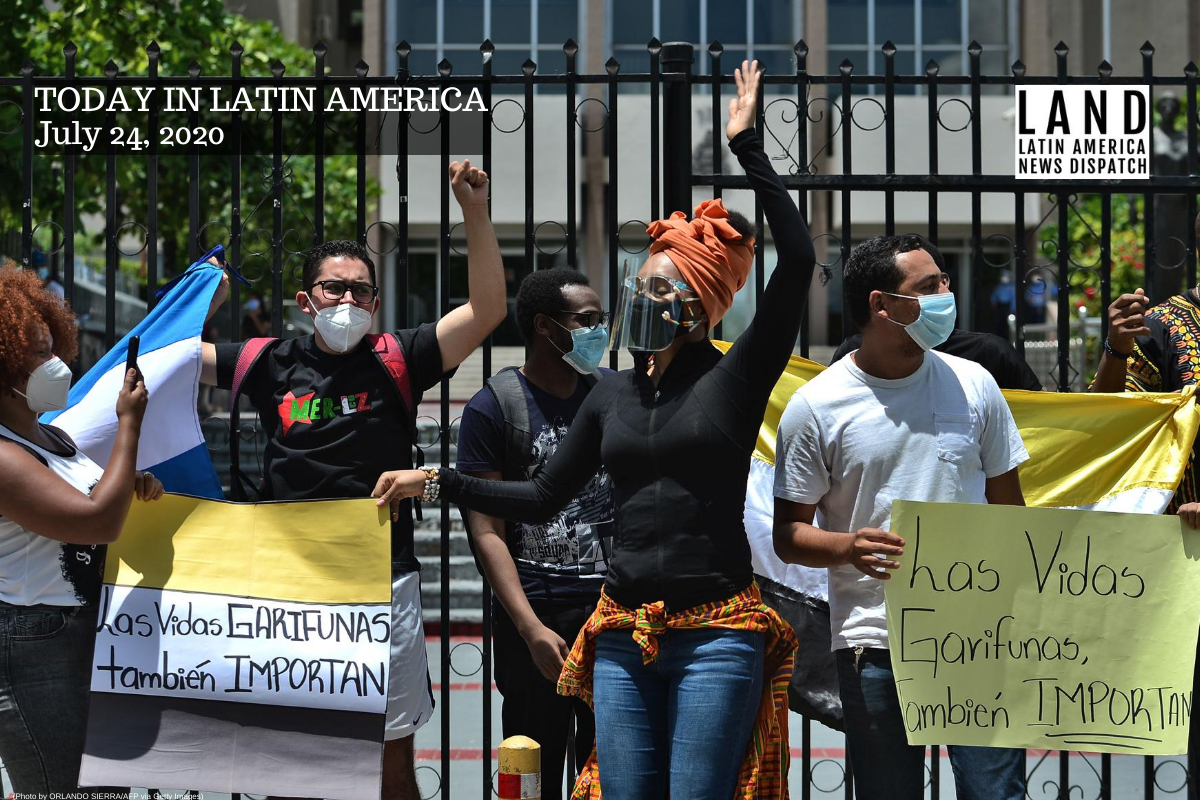 Members of the Garifuna ethnic group protest in front of the Supreme Court of Justice in Tegucigalpa, on July 21, 2020. (Photo by ORLANDO SIERRA/AFP via Getty Images)

HONDURAS: The Indigenous Garifuna community is fearful after a group of five men was kidnapped by unknown assailants this past weekend. The men, who are Afro-Indigenous and from the town Triunfo de la Cruz, were forced into unmarked vehicles at gunpoint on Sunday night and have not been heard from since. Prosecutors say they have yet to establish a motive for the kidnappings.

Residents of Triunfo de la Cruz have been protesting since the abduction occurred, demanding that authorities respond to the incident and punish the perpetrators. Other protests in support of the Garifuna community have also occurred in Costa Rica.

One of the individuals abducted is Alberth Snider Centeno Thomas. Centeno is a community activist who has advocated since 2015 for the Honduran government to compensate the Garifuna people for stolen land, following an Inter-American Court of Human Rights ruling. Drug traffickers, palm oil companies and tourism developers have all staked claim to coastal lands where the Garifuna live. Honduras is one of the most dangerous places in the world to be a land rights or environmental activist, with hundreds killed by unknown assailants since 2009.

ARGENTINA: Local and federal officials are ordering heightened security measures in the city of Buenos Aires after spikes in crime in recent weeks. National Security Minister Sabina Frederic plans on sending 600 federal forces into the capital today, amidst some tension from other security officials. A lack of coordination between leaders has left some officials confused as to who will be in charge of the personnel. There are currently 6,800 federal officers in Buenos Aires, at the request of neighboring mayors.

BOLIVIA: The presidential election has been delayed another month due to a recent increase in coronavirus deaths in the country. The new election date will now be October 18, more than a year after the country’s controversial 2019 elections. Several politicians from former president Evo Morales’ political party are against the delay, claiming that conditions will only worsen under the current un-elected, interim government during the pandemic.

Bolivia currently has more than 65,000 confirmed coronavirus cases and 2,400 deaths.

VENEZUELA: President Nicolás Maduro is confiscating COVID-19 tests from health institutions in an attempt to control the number of people who are testing positive. Several labs fear retaliation from the government if they attempt to test patients without permission. In March, as many as 100 to 200 tests were confiscated from private hospitals. Some doctors believe that the limited testing is resulting in an increased number of people suspected to have died from the coronavirus. Venezuela currently has more than 10,000 confirmed cases of COVID-19.

PUERTO RICO: A group of journalists are suing the government to demand documents that they requested relating to the criminal charges against governor Wanda Vázquez. In the suit, the journalists claim that the Department of Justice failed to comply with their requests for the documents, resulting in said documents leaking online and creating confusion among the public. Records show that the interim Secretary of Justice ordered the removal of the request before presenting the documents to federal prosecutors. Public interest in the case is expected to make it move quickly through the courts, especially considering the current investigation into alleged corruption in Vázquez’s government.

GUATEMALA: The leader of Guatemala’s legislative body has tested positive for COVID-19. President of Congress Allan Rodríguez confirmed in a statement that he will receive treatment at home while working remotely, and that the vice president will be taking over in-person proceedings during congressional sessions. Rodríguez had recently been in close contact with multiple other leaders of Congress. Earlier this week Jorge Villavicencio, a former health minister imprisoned on corruption charges, died due to coronavirus complications.

HONDURAS: A federal court ordered the release of former first lady Rosa Elena Bonilla de Lobo on Thursday, whose conviction had been dismissed earlier this year. Bonilla had been jailed since 2018, serving a 58-year sentence on corruption charges for fraud and embezzlement. Bonilla’s personal secretary has also been released from prison, who was facing similar charges. Both are under explicit order not to leave the country and are to report to the courts once a month starting in August until their new trial date is set.

MEXICO: Nearly 12 million people are unemployed due to the economic fall-out of the coronavirus pandemic, according to new data. Around 7.8 million people are temporarily suspended from their jobs, but less than half believe that they will be brought back on after the pandemic subsides. Employed individuals are also reeling from economic setbacks caused by COVID-19, as more than half of the 32 million people currently working saw a decrease in salary this year. Mexico also saw the highest increase in daily coronavirus infections on Thursday, with more than 8,400 positive cases being reported to the Ministry of Health. Some hospitals are also reported to be at nearly 80% capacity, indicating an overwhelmed public health system.