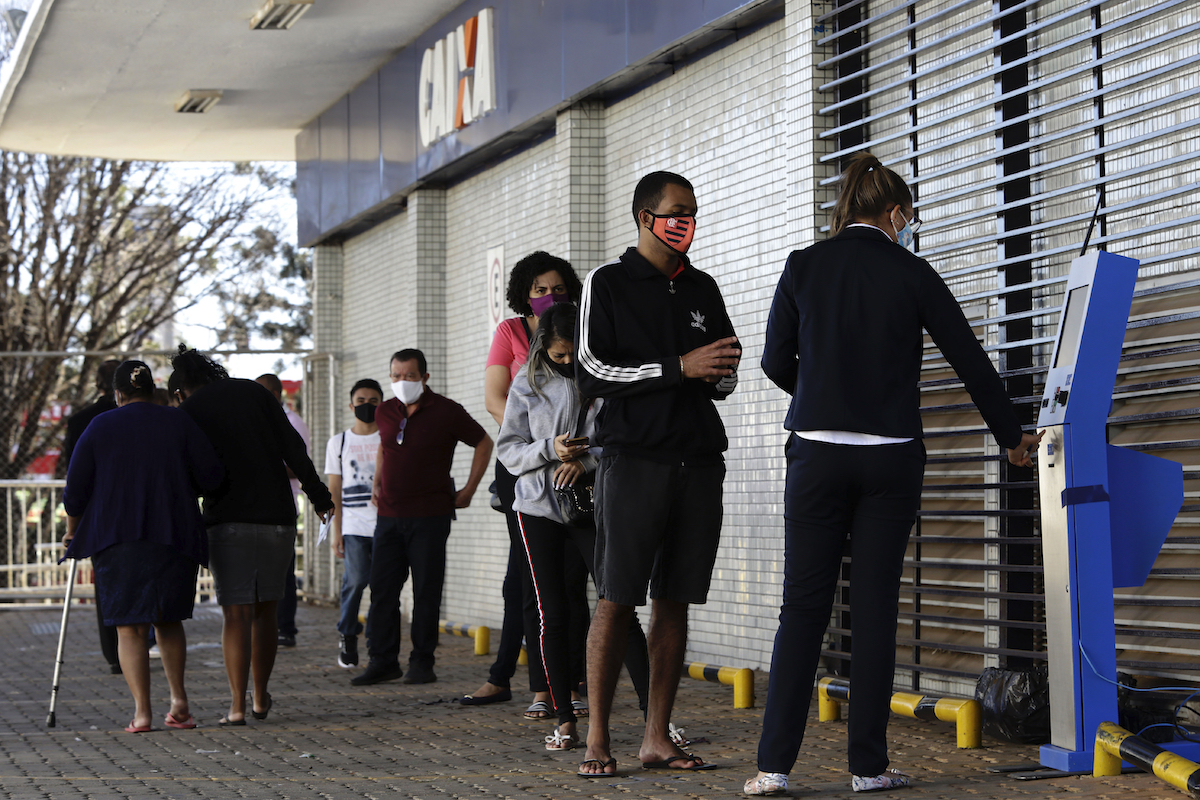 An employee of the state-run bank Caixa Econômica, right, gives customers a ticket number before they wait in line at a nearby bank entrance in Brasilia, Brazil, Thursday, July 23, 2020. (AP Photo/Eraldo Peres)

BRASILIA, Brazil (AP) — Brazil’s extreme poverty has plunged due to a monthly federal handout during the coronavirus pandemic, but threatens to bounce back once the government ceases the stopgap welfare program, a report said Tuesday.

The study by the Getulio Vargas Foundation, a university and think tank, said the number of Brazilians living in extreme poverty fell to 6.9 million in June, or 3.3% of Brazil’s population—the lowest level since the late 1970s. As this year began, 6.2% Brazilians were in extreme poverty, the study said.

“Although we can’t directly compare the figures because of recent methodological changes on the government’s database, we can say it’s one of the lowest proportions ever recorded,” Daniel Duque, the study’s author, said by phone from Rio de Janeiro. He used the World Bank standard that classifies anyone earning less than $1.90 a day to be in extreme poverty.

The federal government since April has doled out $115 monthly to informal-sector workers and micro businesses affected by the pandemic, with single mothers receiving double. Duque and other experts say that helped alleviate poverty in a nation riven by inequality, with average monthly income last year at $280, according to the statistics institute.

The experts warned, however, that the relief is temporary and the number of impoverished Brazilians will rise after the last payment, currently slated for August.

“No question we are in a transitory situation. We won’t have this volume of income transfer forever,” Duque said. “I think it is very likely we will return to previous poverty levels. I fear we can go back to even worse levels if the labor market doesn’t recover.”

The payments have already cost the government more than $32 billion and President Jair Bolsonaro’s economy minister, Paulo Guedes, has said its coffers can ill afford to maintain the program much longer. Loose fiscal policy and rising government debt as a percentage of GDP prompted a slew of credit rating downgrades in recent years, and Guedes assumed his position with pledges to slash spending and shore up government accounts. 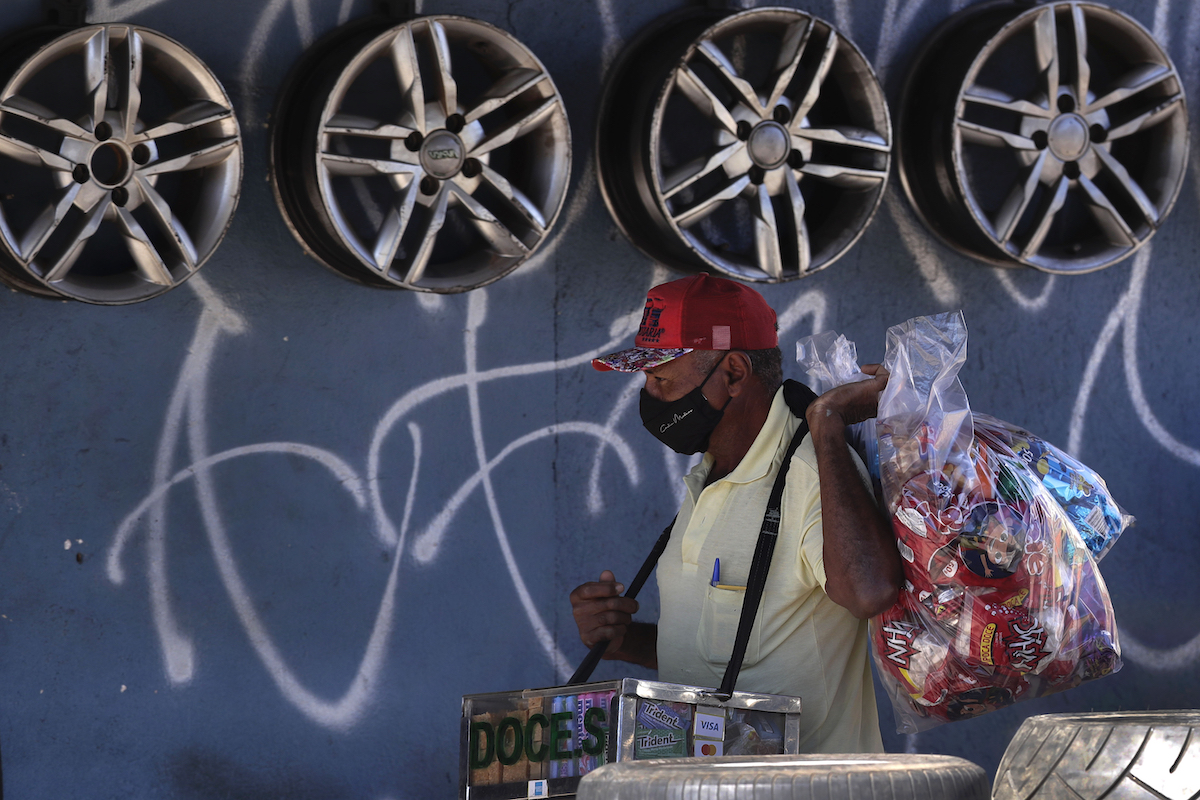 A candy seller wears a mask amid the COVID-19 pandemic in Ceilandia, one of the neighborhoods most affected by the new coronavirus in Brasilia, Brazil, Tuesday, July 21, 2020. (AP Photo/Eraldo Peres)

“We can’t continue for long. It’s 50 billion reais per month [around $10 billion]. It’s not money we have to spare. We are increasing our debt with it,” Bolsonaro said early in July.

The benefit was initially planned to last until June, but the president extended it by two months.

Bolsonaro’s political allies have started pressuring for another extension, arguing the payments help prevent further loss of support stemming from the president’s handling of the COVID-19 crisis. Latin America’s largest nation has confirmed more than 2.4 million infections and 88,000 dead—the second highest totals in the world.

Bolsonaro has consistently downplayed the virus’ severity, arguing that the impact of restrictions on economic activity will prove far more damaging. Economists surveyed by Brazil’s central bank expect the economy to shrink 5.8% this year.

“Without controlling the epidemic there is no economic recovery,” Marcelo Medeiros, a visiting professor at Princeton University’s Brazil LAB who specializes in inequality, said by phone from New Jersey. “Brazil hasn’t controlled the disease, so now the recovery will take much longer and the damage will be greater.”

While the rollout of the social program was marred by widespread difficulties for beneficiaries in accessing the funds, today the payout directly or indirectly reaches half of Brazil’s population of 210 million, according to the citizenship ministry, which is doling out the amounts. 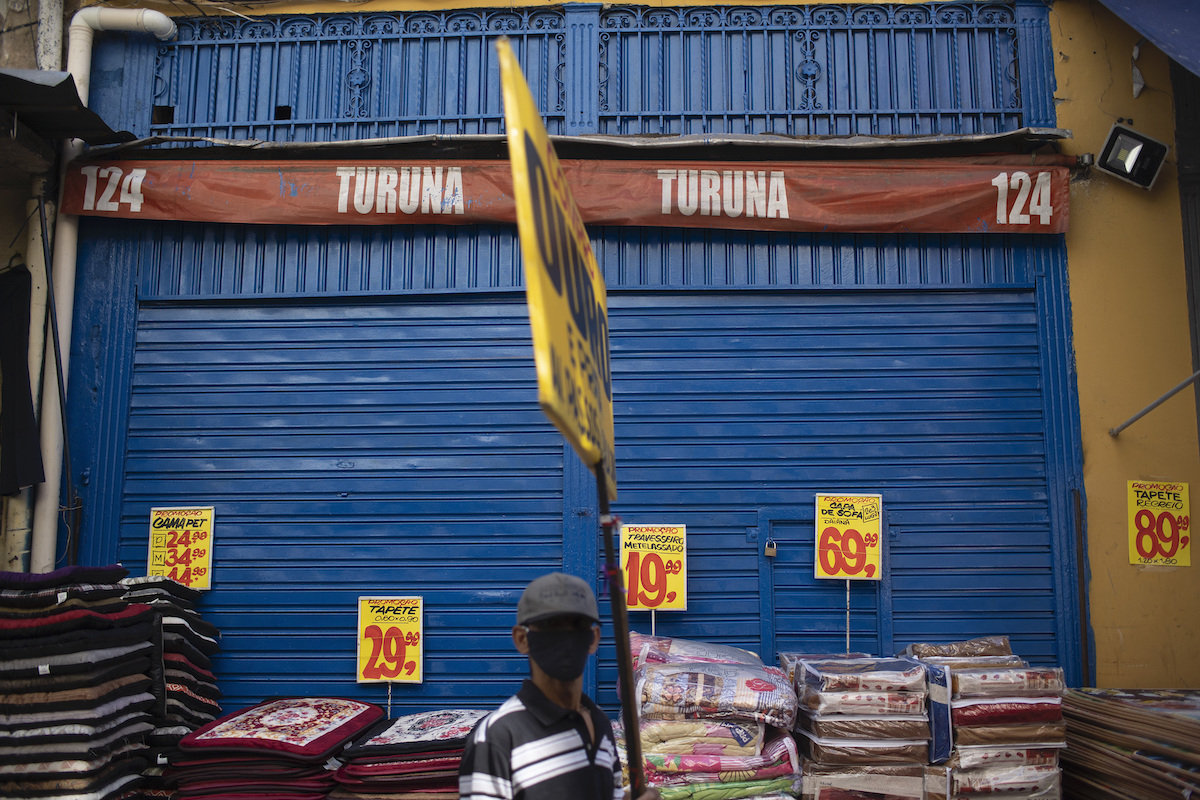 A man advertising a gold dealer stands in front of the shuttered carnival store known as Turuna where street vendors have set up their wares, in Rio de Janeiro, Brazil, Tuesday, July 28, 2020. (AP Photo/Silvia Izquierdo)

Rogério Barbosa, an economic inequality researcher at the University of Sao Paulo, said the coronavirus crisis is still punishing the poor who may soon find themselves unassisted.

“When the benefit is over, there will be no work for them,” Barbosa said in a phone interview.

The economy minister has said he intends to launch a new social program to substitute for the temporary benefit, but the plan and the amount of money it would entail have yet to be detailed.