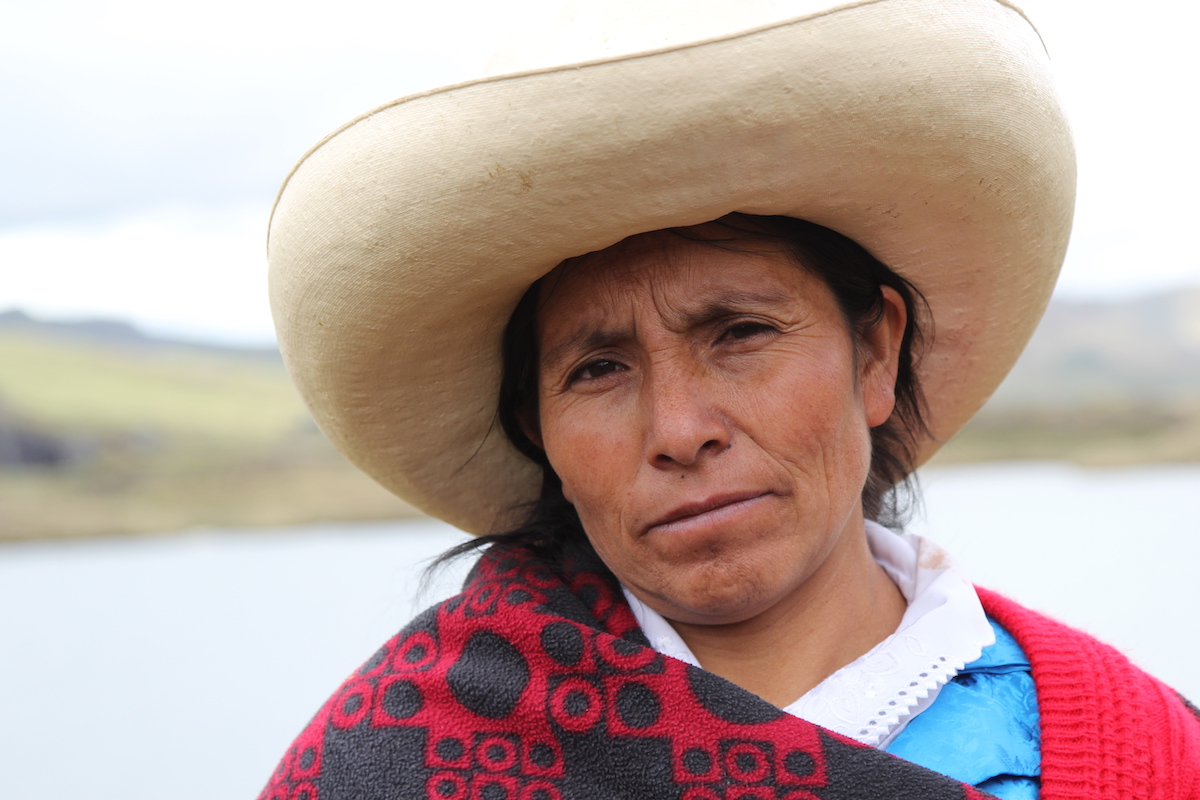 In the early morning of August 9, 2011, a video was uploaded to the internet. In the video, a young woman is recording how a group of Peru’s national police officers, along with workers and private security from the mining project Yanacocha (owned by American company Newmont Peru) in Cajamarca are trying to evict her family from their land.

“Everybody please, I need support. I need help. Look at them how they have come to attack my family,” the woman said while pointing her camera to the workers and machines. A worker tried to snatch the cellphone out of her hands without success.

The video, which lasted a little over four minutes, seemed like the last resort to defend herself, her mother, and sister (who are seen laying down on the floor gasping for air) from the aggressions against them.

“We are humble people and look what the mine is doing with its police,” the woman said.

Since the video became public, the woman did the recording was identified as Máxima Acuña Atalaya de Chaupe, a strong Cajamarquina woman who has lived in that area of Peru all her life. Since 2011, Acuña has been working tirelessly to organize her community and fight to protect their land against these transnational mining companies.

In the last decade, there have been 48 mining projects in Peru with investments of more than $59 billion. However, 10 out of the 48 projects have been placed on hold due to some type of social conflict. Since 2008, the lack of dialogue between mining companies and communities has caused projects valued at $10.3 billion to stop.

According to a new report from EarthRights International, thousands of environmental defenders and their families have suffered killings, violence, harassment, and intimidation. The mining companies, along with the Peruvian state, use criminalization as a mean to silence these defenders.

“There are several agreements between the national police and the mining company to guarantee protection to these companies,” EarthRights’ Amazon Program Director Juliana Bravo Valencia said. “They are pretty much privatizing the national police.”

“The Peruvian state is also responsible for allowing this agreement between the mining companies and PNP,” Bravo Valencia said. “These [mining] companies use the police to silence the community and use the justice system to convict the community leaders.”

In March 2017, local prosecutors in the Peruvian town of Celedín re-opened a case against 16 community leaders who opposed the Conga mining mega-project through protests and destruction of company property. Milton Sánchez Cubas, secretary general of the Plataforma Interinstitucional Celendina and member of Los Defensores de las Lagunas, was accused as being the leader of those disturbances.

“The complaint was made by legal representatives of the Minera Yanacocha SRL company, who, under the charge of the Public Ministry, were allowed to use the criminal justice system to harass, silence, and destroy the work that the defenders in Celendín do against the abuses that certain corporations carry out, with total complicity of some representatives of the Public Ministry, the Ministry of the Interior and the very own National Police of Peru,” Sánchez Cubas said back then.

In 2014, a group of 13 ronderos campesinos (autonomous peasant patrols) were prosecuted because, according to the Chadín 2 hydroelectric project, they held four of the project’s employees hostage. The employees were held for eight hours without any harm. They 13 individuals were absolved after four years of legal back and forth.

The sudden cancellation or delaying of the procedures, moving court proceeding locations to Lima or other places far away, the misuse of state of emergency laws in this region, and the financial toll of these legal procedures are other tactics these companies use to harass these communities.

In 2017, Acuña Atalaya de Chaupe and her family filed a lawsuit against Newmont Mining in Delaware. The lawsuit sought to stop a pattern of harassment and physical and psychological abuse that the family has suffered at the hands of security personnel working on behalf of the mining company.

In 2016, Acuña Atayala de Chaupe won the 2016 Goldman Environmental Prize and became a symbol of the fight of indigenous communities must go through in order to keep living in the region where they have lived for generations.