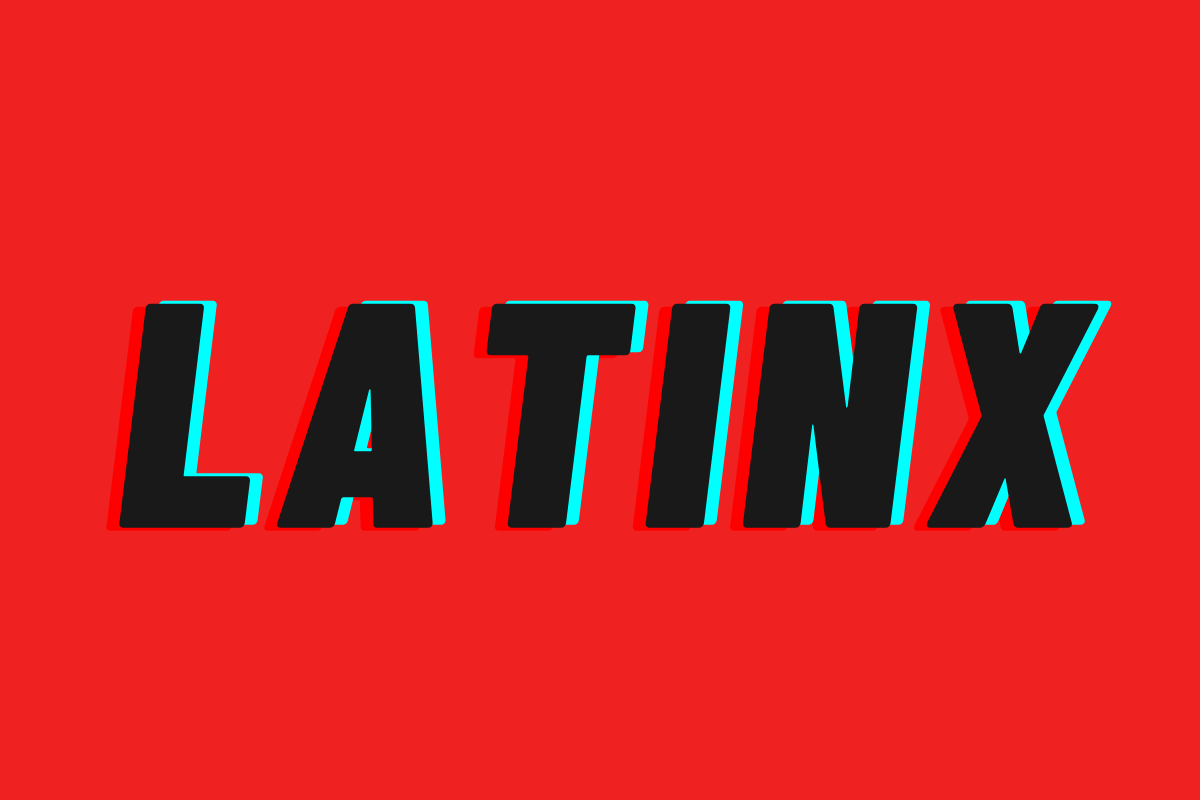 We are in the middle of a global pandemic, social unrest, looming mass evictions, and another Great Depression, but the Hispanics are at it again.

They’re celebrating the majority of a disparate and undefined ethnicity hasn’t heard of or isn’t using the all-encompassing and inclusive term Latinx. Mind you, these Atlases holding up this mythical linguistic Latino heaven (mostly done online and by people whom are seldomly and haplessly quoted by mainstream media to make their coverage seem fair and balanced by adding their shitty opposing views) are also in the minority (LOL).

In other words, the Hispanics who fancy themselves Latinos —because Hispanic is now a dirty word for them for numerous reasons (it lumps us all together with the Spanish and because it was concocted in the US of A as if Latino isn’t also primarily used in the States)— are rejoicing because according to Pew, 76% of our people have not heard of and 20% do not use the term Latinx. Only 3% of us do—mostly advocates and academics as well as some celebrities and a handful of entities that have the decency to hire advocates in their respective fields. 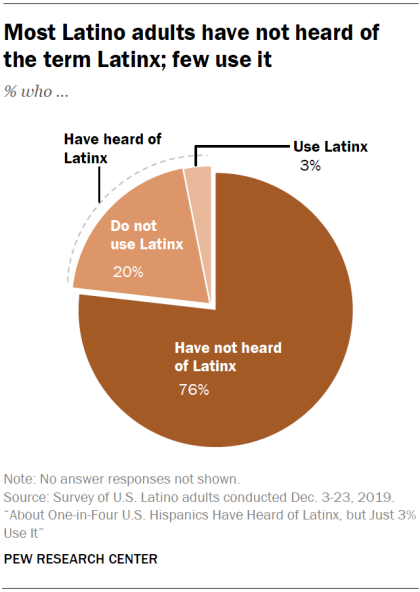 Most of these people sadistically rejoicing are cishet. Most are men. Most are calling the term imperialistic—the brainchild of a colonized mind that has been influenced by Usain LGBTQA+ advocates. As if Spanish isn’t a language of colonizers. As if Spanish wasn’t forced on our ancestors. As if we aren’t the bastard children of those Spanish-speaking rapists. As if language isn’t changeable, adaptable, flexible, fluid… Language is a living, breathing, ever-evolving organism. It’s never been static, unlike you emotionally and intellectually stunted manchildren. No offense to children. But I’ve seen way too many of you stomping your digital feet because a writer or a journalist dared to call us Latinx, so you throw their whole message away no matter how pressing or important it is. RidíCULOS. No offense to culos. They are very important parts of our anatomy. Try to live without one. You’ll see. Now we can definitely exist without you and your shitty opinions. Word the hell up.

My editor thinks I write English in Spanish. Which is a hoot since now I have to translate my English thoughts back to Spanish. I used to do the reverse when I was brought to the States. Instead of that being celebrated as transformative, like we celebrate dead white authors’ audacity to come up with whole new terms, words, and expressions, of slicing and dicing languages, I’m seen as some bizarre foreign usurper that expresses himself in a clearer way than natives. ¿Quién los entiende? People see me as some scrivener anomaly when I am but one in a sea of people who think and write just like me.

Stop being so pedantic with language if it isn’t affecting you physically, materially, spiritually. Not long ago you didn’t even want people calling you Latino. You wanted people to call you by your nationality or the birthplace of your parents. Calling marginalized advocates and academics elitist while gatekeeping a term is pretty fucking grand. You’re the ones wielding the power and the fact that you don’t realize that (or don’t want to realize that) just shows the rest of us that your advocacy for it is rooted in denialism of the little privilege you were given by isms, but even that little privilege is enormously hurtful, materially evil to the people in the margins of our enigmatic ethnicity. Those very same people who are at the frontlines for our liberation and uplifting. Yes, indeed. You’ll see more women, more gay men, more gay women, more nonbinary folk, more trans folk fighting for our rights in the streets, in the classroom, in corporate America, in orgs, in our communities than the people who despise the term Latinx. But most cishet men get all the credit for the progress they have made for us. It’s all very maddening.

If you truly wanted change, you’d spend little time debating the merits of a term and working on undermining and upending the hierarchies in which we live (on and under), but I know you aren’t interested in that porque son unos bárbaros. You just want to occupy all the space.

Check the language settings of your smart devices. Look for the Spanish option. What do you see? Spanish from Spain? Check. Spanish from the U.S.? Check. Spanish from Latin America? Check. We speak a different Spanish in our country of origin. We speak a different Spanish when we move to the States. Hell, we even have regional accents and dialects. Now tell people who hate the term Latinx that they should stop pronouncing, saying certain words the way they do because they’re mispronouncing them and their intonations are weird—the cacophony of fits they’d throw would be deafening. Best believe you are mispronouncing words. Best believe you’re butchering the Spanish the Real Academia Española gatekeeps. We don’t even call ourselves Latinos outside of the United States. Seldom does that term come up during conversations in our countries and it’s mostly coming from celebrities who have gotten famous in the US and from the very same people who go back to their lands who are now decrying Latinx and rejoicing that the majority of our people don’t use it.

Well, guess what? The majority of our people may be more progressive when asked about individual issues, but we are still drowning people in sexism, homophobia, transphobia, racism, classism, machismo, nationalism… Those things won’t immediately and magically disappear if we use an inclusive term. You got that right. But you, the ones who yell the loudest, the ones who type so furiously against a term you think is so insignificant, why the fuck do you care so much? Why the animosity? I’ll tell you why: You want to be the sole champions of our ethnicity. You want to hold all the platforms. You want to be the only ones hustling the culture to the detriment of us all—but especially to those you don’t want sitting next to you on panels, calling you hypocrites for decrying erasure and discrimination while you do the same to them. Yeah, the term Latino is inclusive, but are you? When was the last time you came to the defense of Black and Brown trans Latinx? When was the last time you privately told an executive to not invite that homophobe to a private event in which members of the LGBTQA+ will be in attendance? Even when they’re not around because you don’t want their bigotry near you because that shit is contagious? When was the last time you confronted your family members about their biases? When was the last time you did some introspection?

See, I was once like you eons ago. A whole-ass clown. But then I was exposed to the rhetoric of people who are more marginalized than me, but instead of letting cognitive dissonance permanently possess me, I let it flow through me. I love Spanish as much as any other Spanish-speaker who resents being forced to learn another language to survive, let alone thrive. I prefer reading in Spanish. I prefer Spanish-speaking songs and poetry. It is indeed like wiping our asses with silk, but the thing is, that short, small, and elusive euphoria is part of the trauma bond we’ve formed with our murderous, raping, and pillaging colonizers. Our ancestors suffered a great deal under the Mano Dura of Spanish-speakers. They were forced to speak Spanish.

So please, spare us this purity bullshit when you now speak a lingua franca among other Latinx people in the States. You’re no different than English-speakers now. You’ve borrowed, you’ve changed, you’ve robbed entire words and expressions from other Spanish-speakers and other languages.

If you don’t like the term Latinx, don’t fucking use it.

Mind your business. If Latinx isn’t materially hurting you, God, why do you care? Why are you so fucking loud and so fucking wrong? Vergüenza ajena me dan.

I give a shit the majority of our people don’t use it, but that’s because I also give a shit about our LGBTQA+ community. The majority is wrong. Plain and simple. It’s Ok to stand alone and stand your ground in a room full of bigots. And most of you really are sounding like bigots right now. Go back to your hypocritical homophobic, transphobic progressive caves. Go back to defending Joe Rogan and the use of outdated terms. Go back to reading, quoting, and imitating dead white men philosophers. What’s the difference between you and white Alt-Right incels?

Roll with the times or stay behind because behind you are—light years away. We never needed you. You were obviously looking for a platform on top and at the expense of our most marginalized. You are the straight white men of our enclaves.

You are our weakest link toward true progress, reciprocity, and inclusivity. And for that, you are dismissed.

And take your shitty misogynistic, homophobic, and transphobic family members with you.

A mainstream or indie magazine would usually pay me between $250-$450 for one of my pieces. Since I decided to go solo for the sake of keeping my voice unedited and uncensored, I created this website. Keeping it afloat and these pieces coming is not just time-consuming, but it’s also costly because it angers a lot of those same mainstream papers and magazines (along with their donors) for calling them out—so their favorite retaliation tactic is deplatforming. Especially of unapologetic and unhypocritical Black and Brown voices. Ideally, I’d like to raise between $250-$450 per piece and many of you have actually stepped-up to the plate and helped me accomplish that. For that, I thank you from the bottom of my heart. If you would like to see more of these and support one of the few unbought indie voices, please contribute:

César Vargas is an award-winning writer, advocate, strategist, speaker, and social critic with a loyal following and a robust social capital that spans from coast to coast: Editors, journalists, celebrities, activists, artists, executives, politicians, and multiple communities. He was named one of 40 Under 40: Latinos in American Politics by the Huffington Post. He’s written about internal and external community affairs to several news outlets and quoted in others: The Huffington Post, NBC, Fox News, Voxxi, Okayafrica, Okayplayer, Sky News, Salon, The Guardian, Latino Magazine, Vibe, The Hill, BET, and his own online magazine —which has a fan base of over 25,000 people and has reached over a million— UPLIFTT. He’s familiar with having a voice that informs, invigorates, and inspires people—creating content that usually goes viral. He recently won two awards from Fusion and the National Hispanic Foundation for the Arts for his films Some Kind of Spanish and Black Latina Unapologetically. He attained a degree in Films Studies from Queens College, CUNY. He is currently raising and distributing funds for Haitians in Sosúa.