Panama Health Workers Owed Over $6 Million in Back Wages 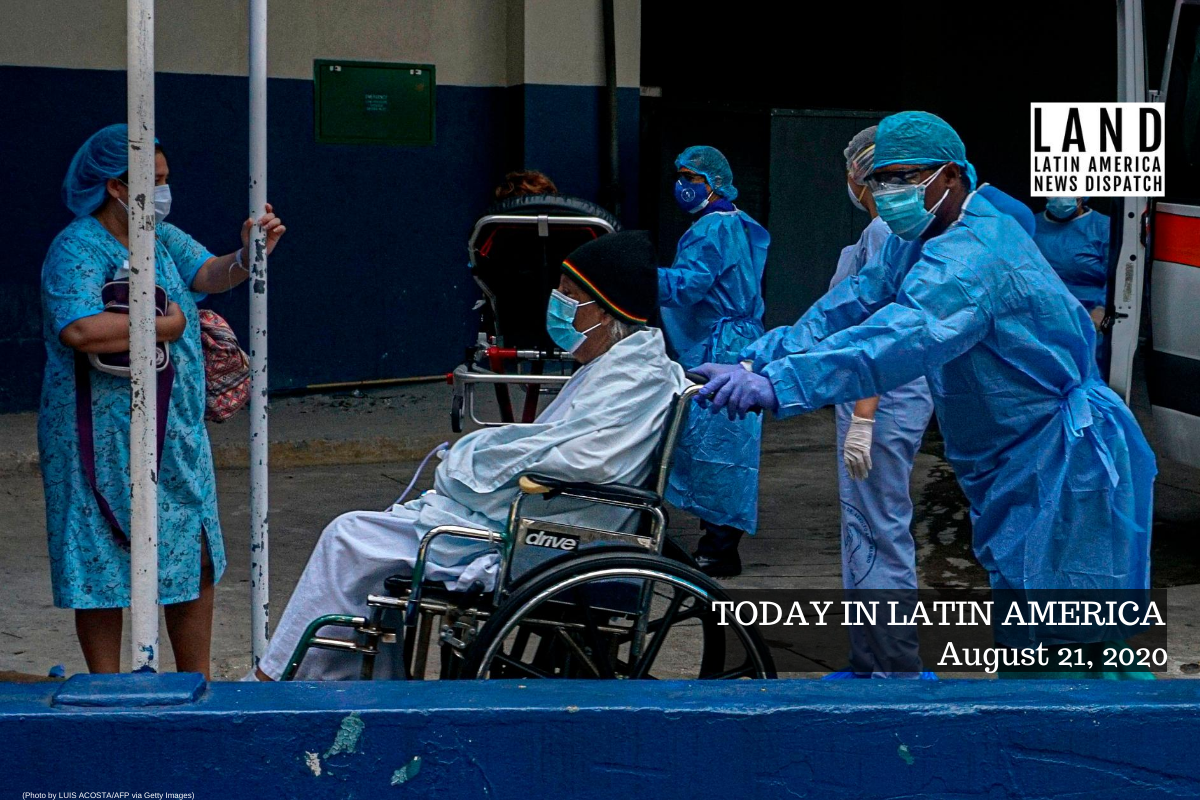 A patient is being evacuated after a gas leak at the Doctor Arnulfo Arias Madrid Hospital Complex, where 90 percent of the patients are being treated for the novel coronavirus COVID-19, in Panama City, on August 7, 2020. (Photo by LUIS ACOSTA/AFP via Getty Images)

PANAMA: At least 400 health professionals hired by the Ministry of Health have not been paid since they began work combating the pandemic in March. The Minister of Health Luis Francisco Sucre requested a transfer of funds this week to pay health personnel their salaries, which totals to around $6 million. An additional $4 million has also been requested to help pay for medical supplies and protective gear for the workers. Although many of these nurses and doctors are working under three month contracts, most have not been paid for their work for more than six months.

Misinformation on COVID-19 has made healthcare work particularly difficult in Latin America. Many nurses and doctors have reported being attacked or facing aggressive patients that blame them for the spread of the coronavirus. The strains that weak healthcare systems have had to endure also make the job dangerous due to fear of becoming infected. In Panama alone, more than 5,300 healthcare workers have tested positive.

ARGENTINA: Tourists visiting Mar del Plata will be expected to take a swab test to verify that they are not infected with COVID-19. Each tourist will also be tracked in order to assure that popular tourists locations such as beaches remain at low capacity. Social distancing protocols will be enforced in most indoor and outdoor locations. The number of COVID-19 cases in the area has been steadily increasing, with an average of 70 to 75 new cases a day.

BRAZIL/PERU: Hundreds of Brazilians have been stuck in Peru with no means to return home since the beginning of the pandemic. Many of those currently in the Andean country have no access to jobs, healthcare or adequate housing. Although 12 humanitarian flights have been arranged to send Brazilians home, hundreds continue waiting for help. According to the Brazilian Embassy in Peru, flights are still being coordinated to send more people back to Brazil. Peru’s international borders have been closed for five months due to the dire health situation regarding the coronavirus in the country.

ECUADOR: Unions and workers in the province of Galapagos are pleading for government aid due to an ongoing economic crisis that has left hundreds of people unemployed. Union workers addressing President Lenín Moreno stated that tourism was their primary source of income, which has since vanished due to the pandemic. Galapagos has recently resumed tourism operations, but the average number of visitors remains low. Workers also reported that there is a shortage and overpricing of food in the area. The groups have proposed that the government help refinance outstanding debts taken out during the pandemic, and that payments for patents, permits, and other procedures be suspended for two years.

PERU: New data indicates that Peru has one of the highest death tolls for journalists in the world since the beginning of the pandemic. Although it is difficult to determine whether or not these journalists died as a result of working during the pandemic, it is evident that the number of journalists dying from COVID-19 is high. In the capital Lima alone, 22 journalists have died, according to the College of Journalists of Lima. A total of 82 reporters have died after being infected with coronavirus since March 16. Due to difficulties in obtaining data on victims of the virus, the actual death toll may be higher.

PUERTO RICO: Multiple government agencies have had to close their offices due to an increasing number of COVID-19 infections. The offices closed include the Revenue Collection Center, the Driver Services Center of Bayamón, as well as both sections of Congress until September 8. The San Juan Judicial Center has also closed after reporting a number of coronavirus cases. Health officials predict that another surge in cases could be possible if stricter precautions are not taken in workplaces.

REGION: Two tropical depressions located on both sides of the Caribbean are expected to become tropical storms today. Tropical storm watches have been posted for several islands in the area, as well as at the Honduras-Nicaragua border on the west side of the region. One of the storms is expected to travel through Puerto Rico, the Dominican Republic, and Cuba. The storm is expected to make landfall near Puerto Rico on Saturday. Forecasters predict that the storms could potentially become hurricanes as they approach the United States.

EL SALVADOR: Congress and President Nayib Bukele continue to disagree when the economy will reopen. Earlier this month, the legislature voted to begin reopening under Decree 661, which was then deemed unconstitutional by Bukele and vetoed. The veto was overturned by the legislature but a consensus has not been reached. The decree would place the Ministry of Health in charge of all safety protocols regarding four different phases of reopening the country. A new proposal for beginning economic activity was submitted earlier this week in the hopes of beginning the reopening, but Bukele has been insistent on delaying what he deems an unconstitutional decree.

NICARAGUA: Around 20% of service workers are not expected to get their jobs back after dining places begin to reopen, according to the Chamber of Restaurants. An ongoing recession and the pandemic have impacted jobs in the industry. Between 40 and 50% of service workers are currently unemployed, and restaurant sales are down around 40%. Government officials also estimate that 20% of restaurants will most likely not survive the current crisis.

MEXICO: An airplane became stuck after not being able to clear an overpass in one of Mexico City’s busiest traffic intersections. According to police, the plane was one of many being taken by a truck for maintenance. The tail of the plane was too large to go through the overpass, resulting in the plane falling off of the vehicle. Traffic was blocked for hours as police attempted to move the plane back onto the truck. No injuries or fatalities were reported as a result of the incident.