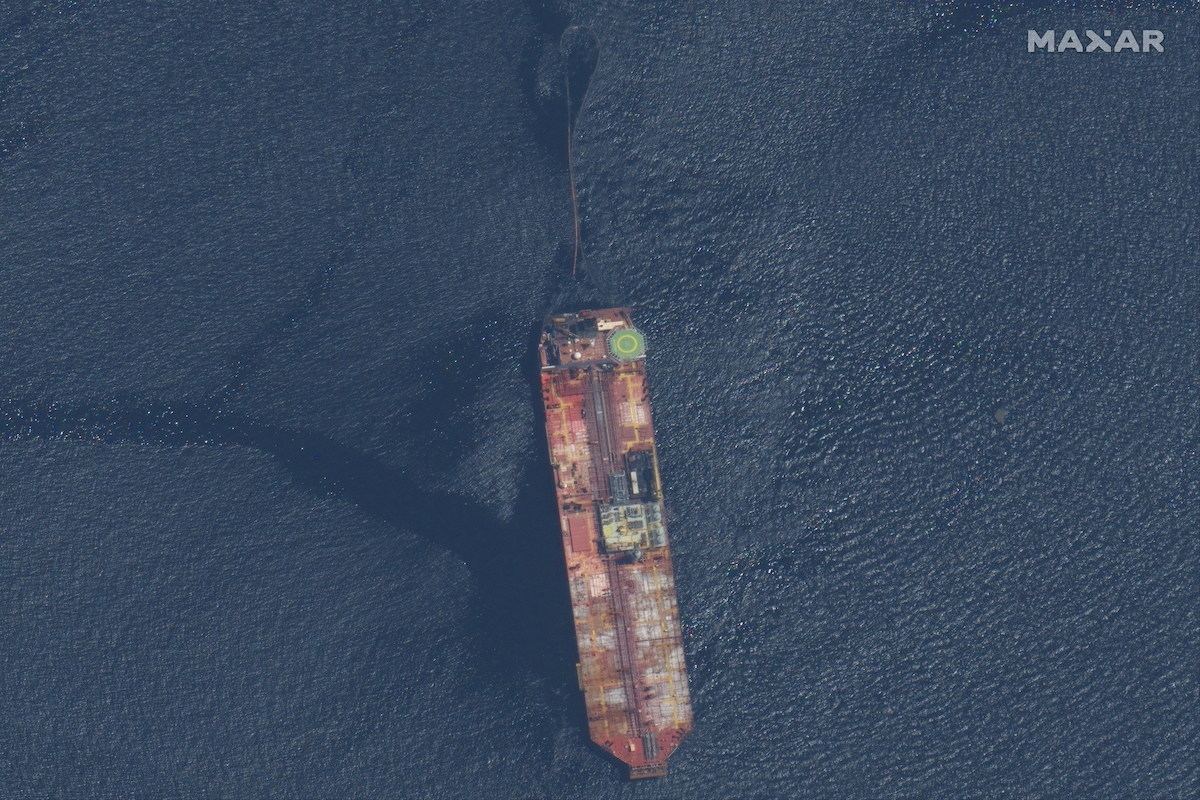 This satellite image released by Maxar Technologies shows the FSO Nabarima oil tanker off the coast of Trinidad and Tobago, Sunday, August 9, 2020. The oil tanker listing off a remote Venezuelan coastline is triggering international calls for action. Critics of President Nicolás Maduro and maritime experts say the FSO Nabarima is taking on water and could sink. (Maxar Technologies via AP)

CARACAS, Venezuela (AP) — The sight of a huge oil tanker that has taken on water and is leaning to one side off a remote stretch of Venezuela’s coast has triggered international calls for action.

After years of neglect, the FSO Nabarima, a rusting hulk full of thick crude, is in a dangerous state of disrepair. While the full extent of the damage is unknown, if not repaired soon it could sink and spell environmental disaster, polluting turquoise seas along the vast coastline of Venezuela and several neighboring Caribbean nations, government critics and maritime experts say.

Adding to concerns, Venezuela’s socialist government has said nothing publicly about its plans for the container.

However, anti-government oil workers like Eudis Girot, head of the Unitary Federation of Petroleum Workers of Venezuela, has launched a campaign seeking to get President Nicolás Maduro to pay attention. He is urging the embattled leader to look beyond years of bitter disputes between his government and the oil workers union to head off a potential environmental disaster.

“I invited you, Mr. President. Take a helicopter. Go out there. Do your own inspection,” Girot said in an online video in recent days. He has also posted three photos of what he said is the ship’s flooded engine room. “By God, I hope I am wrong.”

The Venezuelan-flagged Nabarima is a 264-meter (866-foot) long ship believed to be almost filled to its capacity of 1.4 million barrels of crude—about five times the amount the Exxon Valdez spilled in 1989.

It was used as a stationary platform anchored in the Gulf of Paria designed to help export the OPEC nation’s oil. But it has fallen inactive with the recent plunge in global energy demand due to the coronavirus pandemic and to U.S. sanctions on Maduro’s government that have scared away potential buyers of the country’s heavy crude.

Critics of Venezuela’s collapsing state-run oil firm PDVSA say the double-hulled tanker —built in 2005 for ConocoPhillips by South Korea’s Samsung— is just one example of the socialist government’s corruption and mismanagement that has bankrupted the nation’s petroleum industry that once made Venezuela wealthy.

“That ship should not be in this shape except for neglect and stupidity,” said Russ Dallen, head of Caracas Capital Markets, who closely tracks Venezuela’s maritime industry.

An industry executive, who spoke to The Associated Press on the condition of anonymity for fear of retaliation, said the lack of maintenance appeared to have damaged valves in the ballast system used to stabilize the ship.

Today it dangerously leans more than 5 degrees on its right side, the executive said. Shipping tracking data shows that it has also sunk 14.5 meters (47.57 feet), right at the waterline, a sign of excess weight.

A potential spill in the shallow inland sea that Venezuela shares with Trinidad & Tobago could damage fragile mangroves, fisheries and bird sanctuaries. The situation has raised alarm in Trinidad and the nearby Dutch Caribbean islands of Aruba, Bonaire and Curacao, said a second industry executive, who also insisted on speaking anonymously because they weren’t authorized to discuss the matter publicly.

To prevent an environmental disaster, PDVSA would have to transfer crude off the tanker’s cargo to another vessel in a risky ship-to-ship transfer. But U.S. sanctions that ban Americans from doing business with Venezuela could scare off many foreign companies from getting involved.

However, the Italian oil firm Eni, which operates the Petrosucre joint venture as a minority partner with PDVSA, said in a statement Wednesday that there is currently no risk of an oil spill. The tanker is “stable” and recent flooding of the ship was “addressed and solved,” Eni said, adding that it is working with PDVSA next to unload the oil from the Nabarima.

PDVSA and Venezuela’s ministry of communications did not immediately respond to emailed requests by AP seeking comment on the Nabarima.

Ian Ralby, the founder of the maritime security firm I.R. Consilium, compared the Venezuelan tanker to the FSO Safer, which has been decaying for years off the coast of Yemen with more than 1 million barrels of oil.

“This may seem like little more than a leaking pipe, far away in Venezuela,” Ralby said. “But the consequences could be catastrophic for the entire Caribbean.”

This is the second recent maritime emergency for Venezuela after a spill at the El Palito refinery last month coated in crude a 9-mile stretch of pristine Caribbean beaches a few hours from the capital of Caracas.

As a union leader, Girot talks frequently with workers for Petrosucre who risk their lives boarding the Nabarima and report back what they see. He said he is ready to retract his statements and let Maduro throw him into jail if he turns out to be wrong.

The problem is nothing new, but it is growing critical, he said.

“Nobody’s paying attention to this situation,” Girot said in a phone interview from his base in Barcelona, Venezuela. “If this oil remains in this ship we run the risk of a tragedy and ecological catastrophe at any moment.”