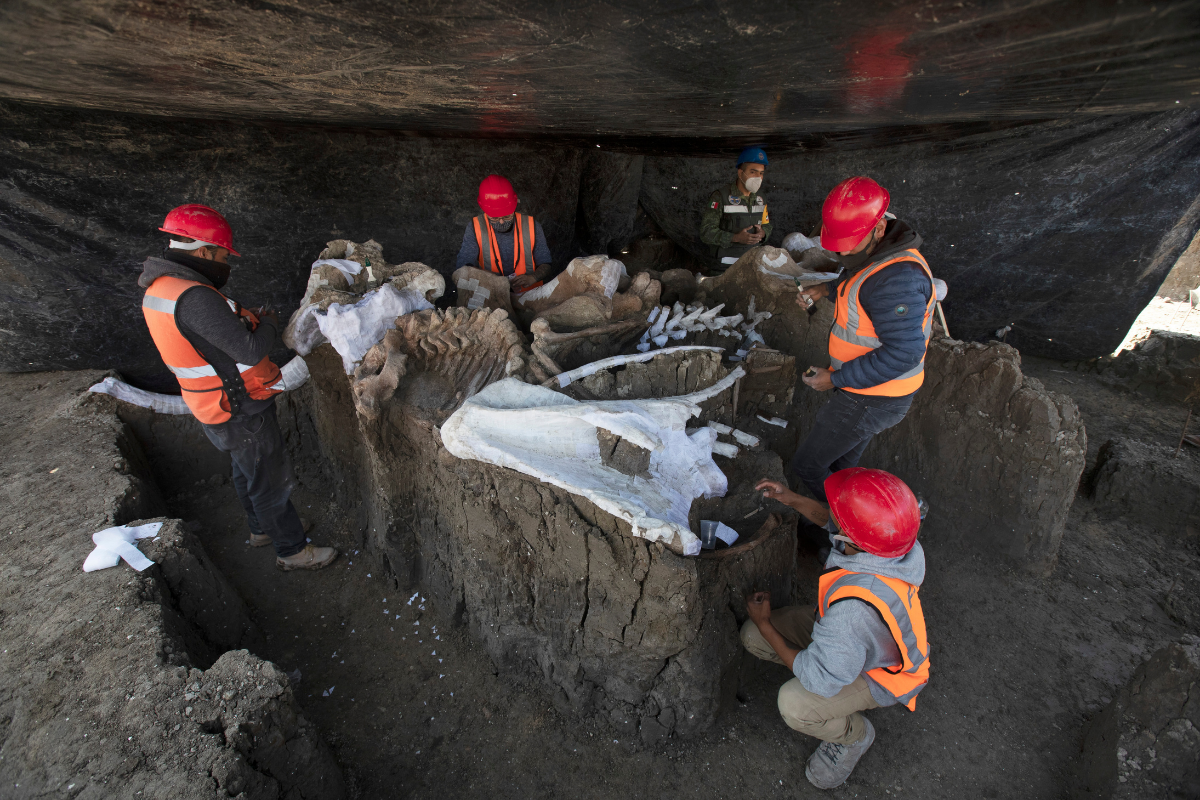 Paleontologists work to preserve the skeleton of a mammoth that was discovered at the construction site of Mexico City’s new airport in the Santa Lucia military base, Mexico, Thursday, September 3, 2020. (AP Photo/Marco Ugarte)

MEXICO CITY (AP) — The number of mammoth skeletons recovered at an airport construction site north of Mexico City has risen to at least 200, with a large number still to be excavated, experts said Thursday.

Archaeologists hope the site that has become “mammoth central” —the shores of an ancient lake bed that both attracted and trapped mammoths in its marshy soil— may help solve the riddle of their extinction.

Experts said that finds are still being made at the site, including signs that humans may have made tools from the bones of the lumbering animals that died somewhere between 10,000 and 20,000 years ago.

There are so many mammoths at the site of the new Santa Lucia airport that observers have to accompany each bulldozer that digs into the soil to make sure work is halted when mammoth bones are uncovered.

“We have about 200 mammoths, about 25 camels, five horses,” said archaeologist Rubén Manzanilla López of the National Institute of Anthropology and History, referring to animals that went extinct in the Americas. The site is only about 12 miles (20 kilometers) from artificial pits, essentially shallow mammoth traps, that were dug by early inhabitants to trap and kill dozens of mammoths. 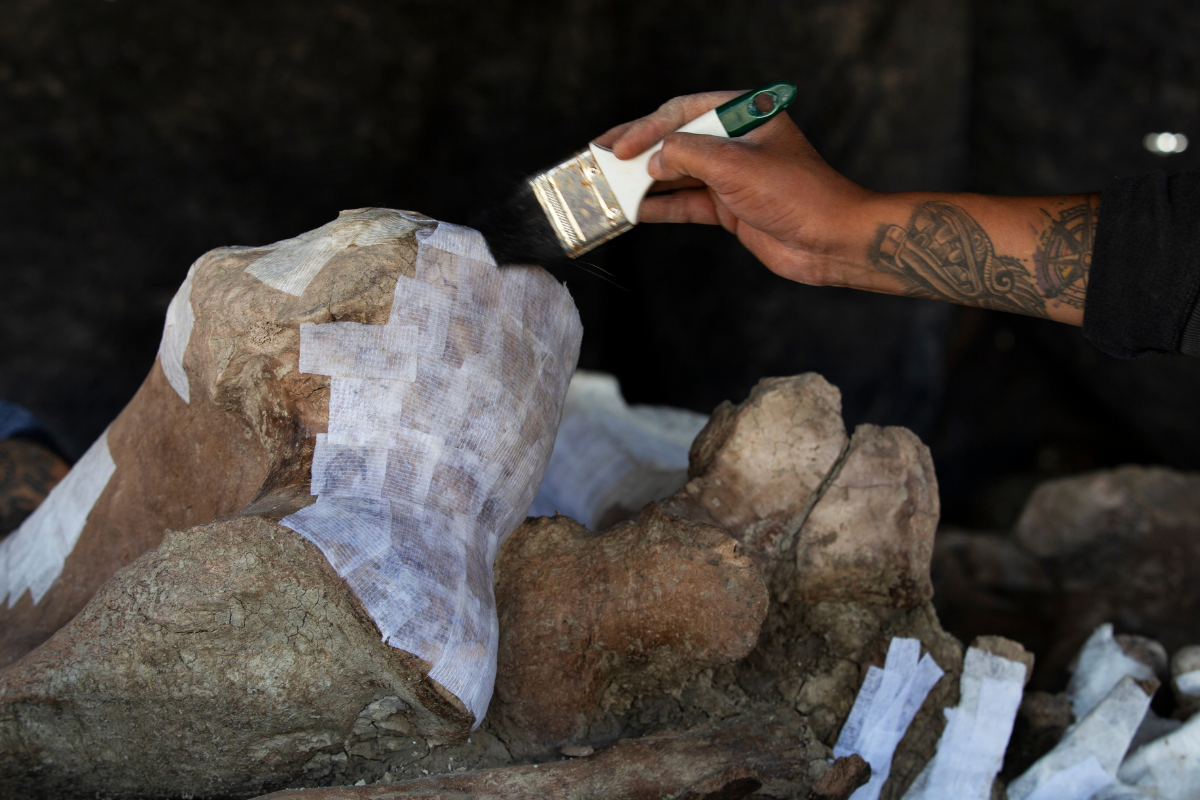 A paleontologist works to preserve the skeleton of a mammoth that was discovered at the construction site of Mexico City’s new airport in the Santa Lucia military base, Mexico, Thursday, September 3, 2020. (AP Photo/Marco Ugarte)

Manzanilla López said evidence is beginning to emerge that suggests even if the mammoths at the airport possibly died natural deaths after becoming stuck in the mud of the ancient lake bed, their remains may have been carved up by humans, somewhat like those found at the mammoth-trap site in the hamlet of San Antonio Xahuento, in the nearby township of Tultepec.

While tests are still being carried out on the mammoth bones to try to find possible butchering marks, archaeologists have found dozens of mammoth-bone tools —usually shafts used to hold tools or cutting implements— like the ones in Tultepec.

“Here we have found evidence that we have the same kind of tools, but until we can do the laboratory studies to see marks of these tools or possible tools, we can’t say we have evidence that is well-founded,” Manzanilla López said.

Paleontologist Joaquin Arroyo Cabrales said the airport site “will be a very important site to test hypotheses” about the mass extinction of mammoths. 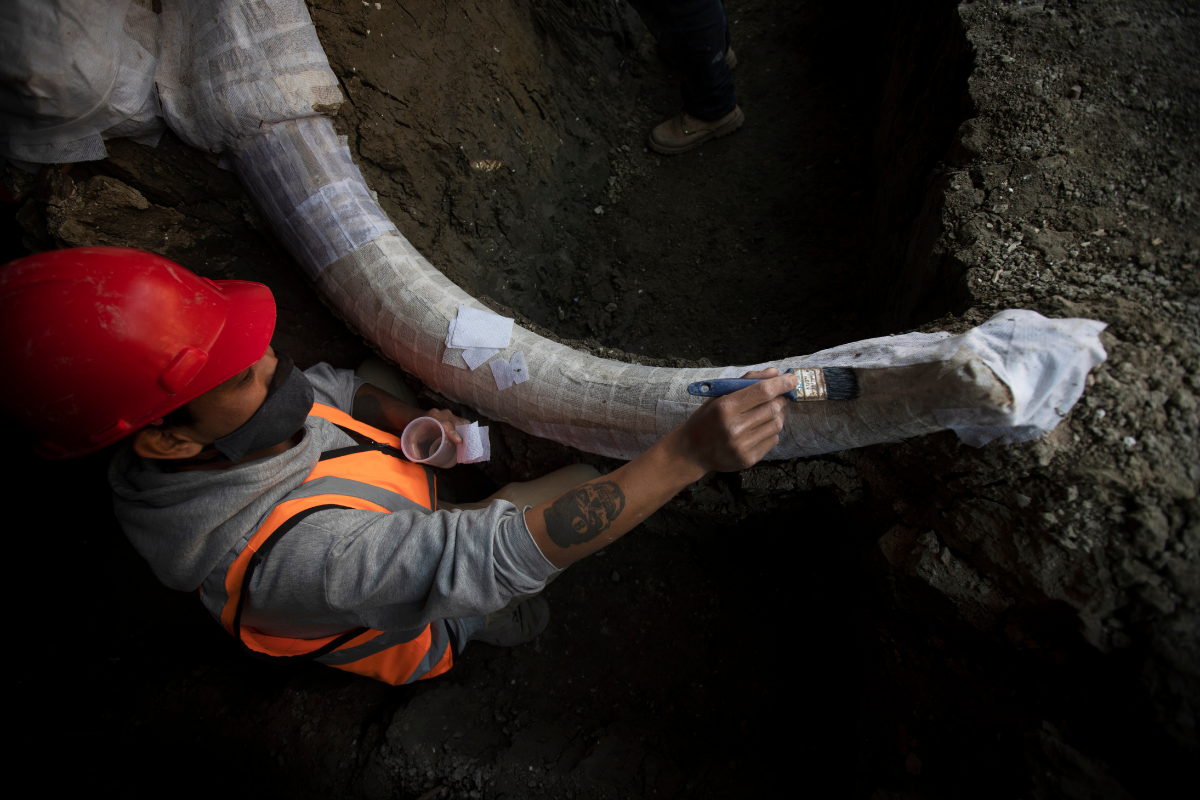 A paleontologist works to preserve the skeleton of a mammoth that was discovered at the construction site of Mexico City’s new airport in the Santa Lucia military base, Mexico, Thursday, September 3, 2020. (AP Photo/Marco Ugarte)

“What caused these animals extinction, everywhere there is a debate, whether it was climate change or the presence of humans,” Arroyo Cabrales said. “I think in the end the decision will be that there was a synergy effect between climate change and human presence.”

Ashley Leger, a paleontologist at the California-based Cogstone Resource Management company who was not involved in the dig, noted that such natural death groupings are rare. “A very specific set of conditions that allow for a collection of remains in an area but also be preserved as fossils must be met. There needs to be a means for them to be buried rapidly and experience low oxygen levels.”

The site near Mexico City now appears to have outstripped the Mammoth Site at Hot Springs South Dakota —which has about 61 sets of remains— as the world’s largest find of mammoth bones. Large concentrations have also been found in Siberia and at Los Angeles’ La Brea tar pits. 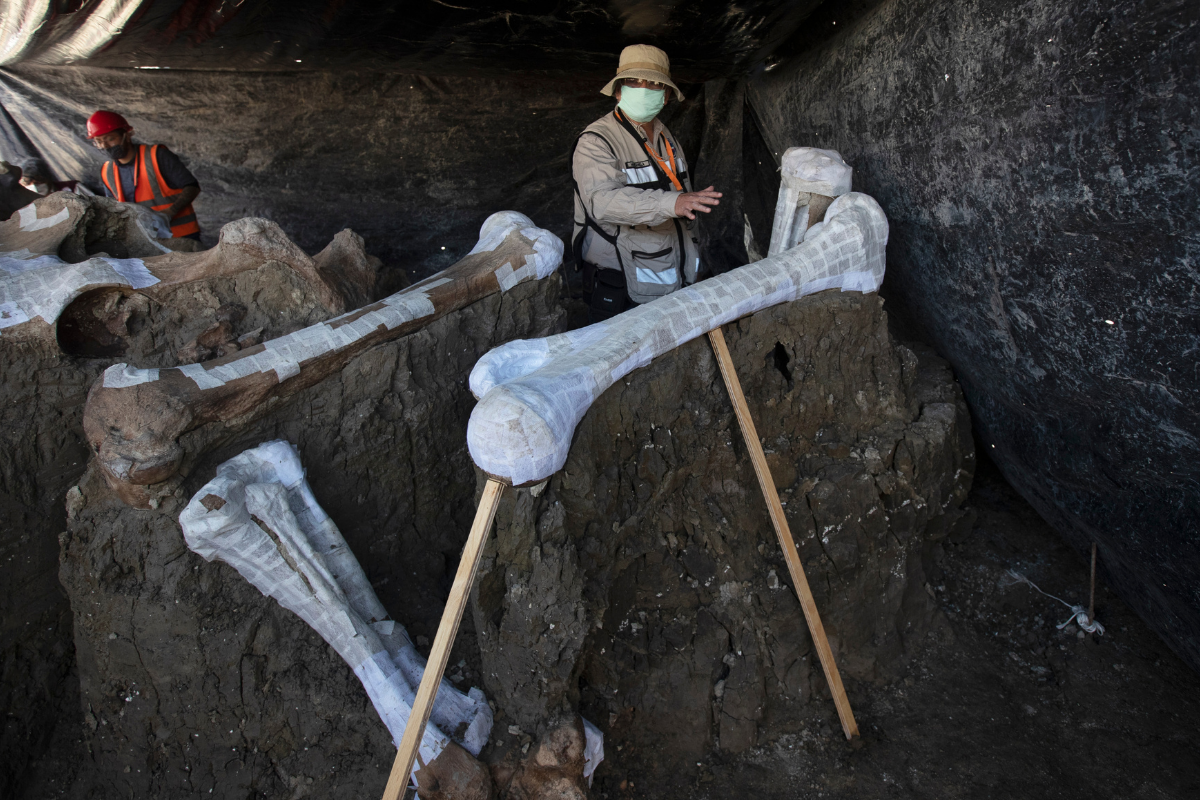 Ruben Manzanilla Lopez of the National Anthropology Institute and responsible for the preservation work in the area shows the skeleton of a mammoth that was discovered in the construction site of Mexico City’s new airport in the Santa Lucia military base, Mexico, Thursday, Sept. 3, 2020. (AP Photo/Marco Ugarte)

For now, the mammoths seem to be everywhere at the site and the finds may slow down, but not stop, work on the new airport.

Mexican Army Capt. Jesús Cantoral, who oversees efforts to preserve remains at the army-led construction site, said “a large number of excavation sites” are still pending detailed study, and that observers have to accompany backhoes and bulldozers every time they break ground at a new spot.

The project is so huge, he noted, that the machines can just go work somewhere else while archaeologists study an area.

The airport project is scheduled for completion in 2022, at which point the dig will end.