Stalled by Pandemic, Migrants Press in Quest for Better Life 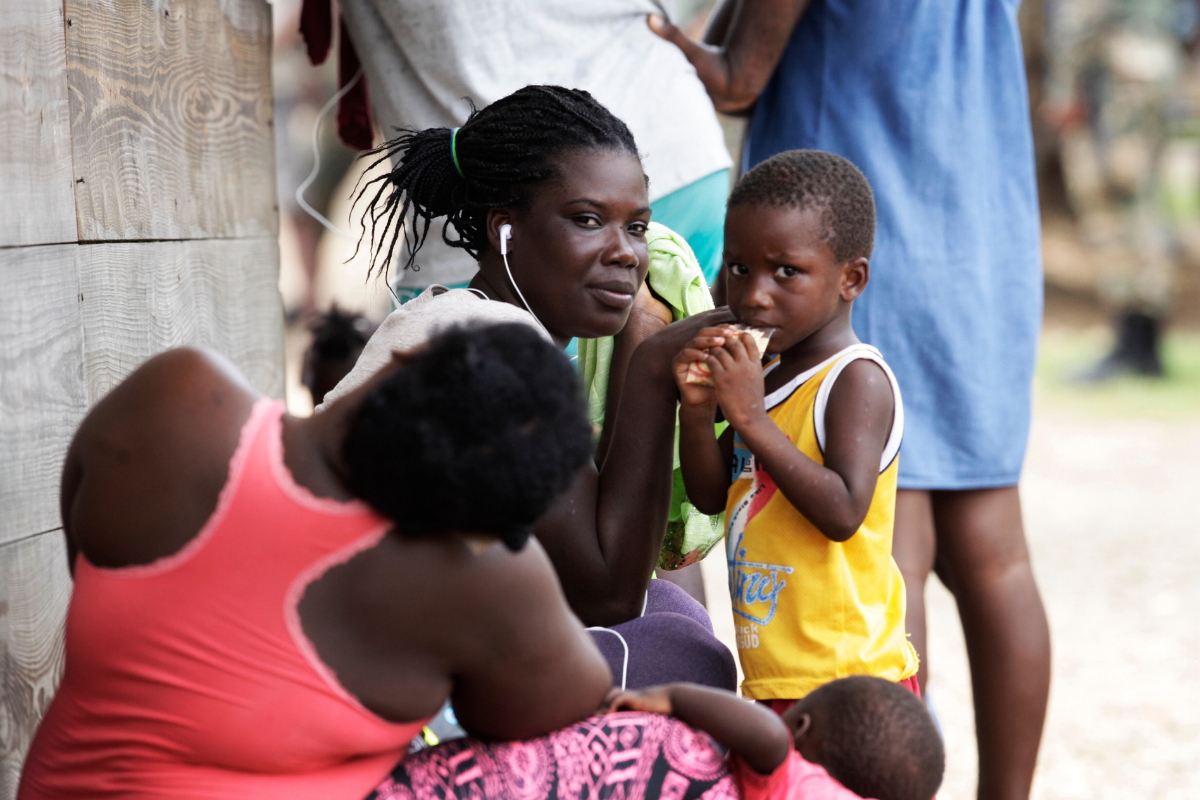 LAJAS BLANCAS, Panamá (AP) — Duperat Laurette fled Haiti after her country’s massive 2010 earthquake, making her way first to the Dominican Republic, then Chile and five years later to Panamá, all with the dream of reaching the U.S. and finding a job to help support 14 siblings left behind in Haiti.

The coronavirus finally stopped her.

Panamá, the slender bottleneck between the North and South American continents, is a transit point for virtually every migrant heading from South America to the United States by land and it closed its borders on March 16 to halt the spread of COVID-19. The closure left nearly 2,000 migrants from Haiti and a handful of African and Asian countries stuck in camps in the jungle along Panamá’s northern and southern borders.

They are among hundreds of thousands, perhaps millions, of migrants stranded in countries around the world because of virus-related border closures.

Thousands of temporary workers from around Asia were stuck outside New Zealand when that country closed its borders. Other Asian workers got stranded in Moscow airports. Migrants have also been left in makeshift conditions in the Sahara Desert after being expelled without warning from detention centers in Algeria and Libya.

The migrants in Panamá say they know the United States has effectively suspended its asylum process at the southern border, but they want to keep heading there anyway, in the hope that they can somehow get in. 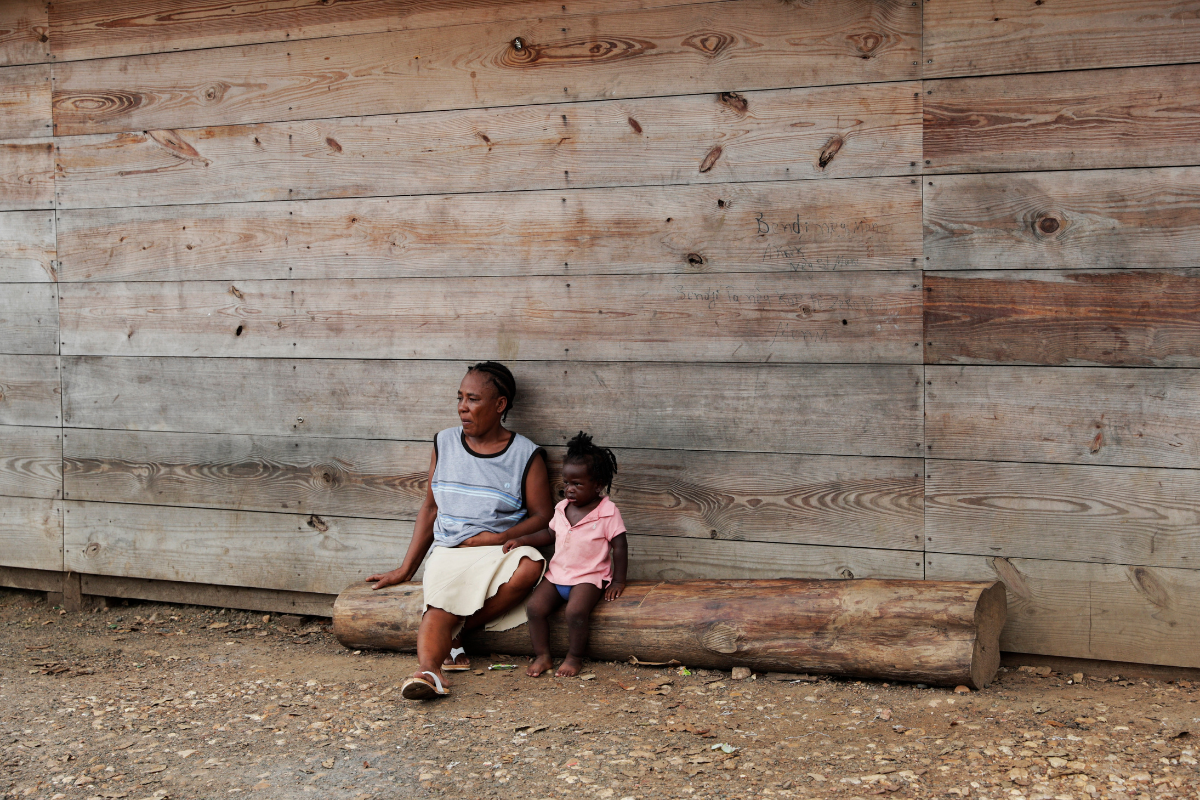 Duperat Laurette sits on a log with a girl at the entrance of a migrant shelter in Lajas Blancas, Darien province, Panamá, Saturday, August 29, 2020. (AP Photo/Arnulfo Franco)

Laurette, 45, and her husband arrived at the Panamanian border with Colombia seven months ago and have advanced no farther. There are no opportunities for work in the jungle, and she and her husband have exhausted their money.

When she was in another camp, Laurette was taken to the hospital for what doctors said was a fibroid tumor that gave her belly pains and caused her to lose weight.

“They brought me to the hospital to operate, but they never did,” she said. “They said there was no space for the operation, the hospital is full with cases of COVID-19.”

Still, the couple have rejected Panama’s offers of free flights home. Many of the migrants left their native countries years ago and cannot imagine returning worse off than they were before.

“I’m still sick. I don’t know what I’m going to do,” Laurette said in her native Kreyol. 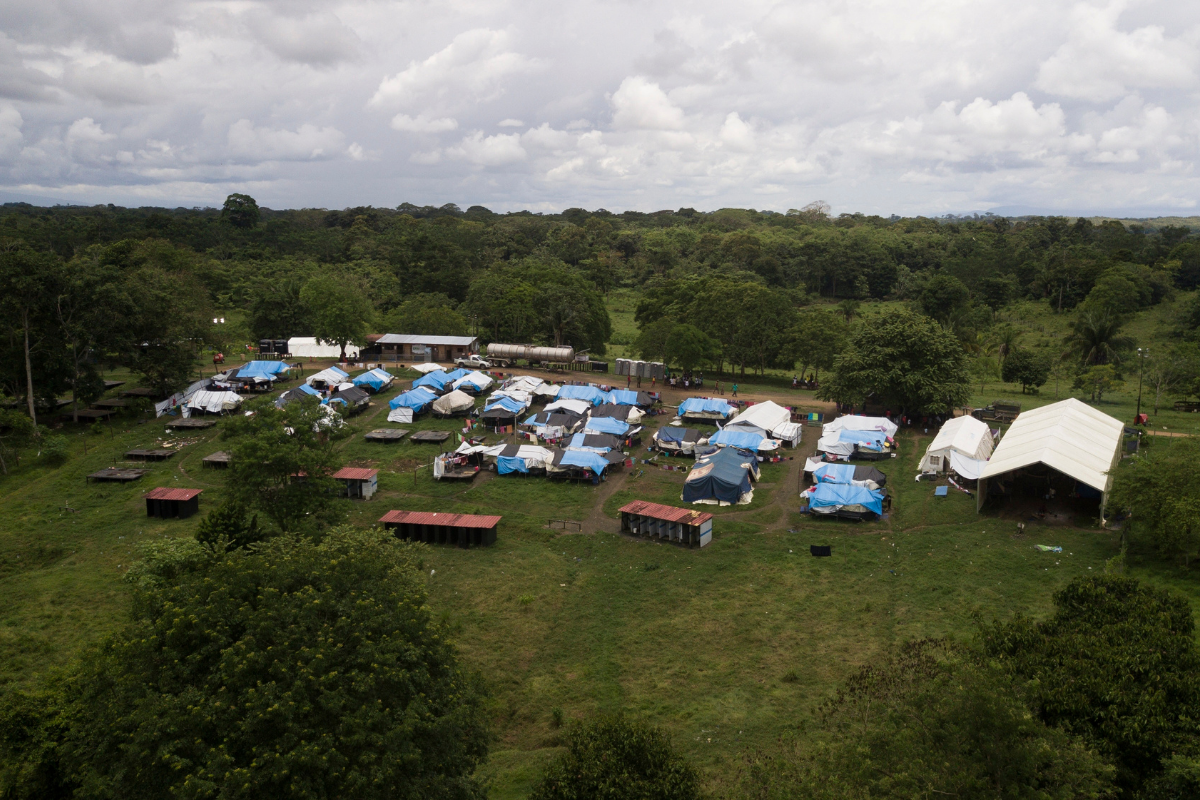 Tensions have been rising here in Lajas Blancas where about 200 migrants wait, as well as in nearby Peñitas, where some of nearly 1,100 migrants were accused last month by police of setting fire to tents holding medical supplies at another camp. Eight migrants have been jailed in that incident and could face deportation.

Jean Bernadeau hoisted a young girl up and pointed to the welts mosquito bites have left on her legs. “We know there is a strong illness out there,” he said. “We can’t stay here forever.”

“The problem here is always that we have a lot of children, pregnant women,” said Bernadeau, another Haitian who arrived from Chile. He had lived there for five years and saved $4,000 to continue his journey, but that money is gone now. “Here we live like prisoners in a jail.”

The flow of migrants through the dense and dangerous Darien jungle has been going strong for more than a decade. This is the first time authorities have stopped it for an international health emergency.

In 2015 and 2016, a huge influx of Cuban migrants tried to make it to the U.S. border before the end of a U.S. policy that favored them. That situation forced Central American nations to fly migrants along portions of their route.

Panamá saw a wave of migrants in early 2019 that led to agreements with neighboring Costa Rica to allow their free passage. Most of those stuck in Panamá fled Haiti after the earthquake that left the country in ruins. Many spent years working in Brazil and Chile, saving money to continue north.

In Lajas Blancas, the migrants live in a grassy field under tarps on wooden platforms packed tight between a dirt road and the brown waters of a river. A row of portable toilets sit across the road, and jungle surrounds them. They prepare their food over wood fires. Border police guard the entrance to the camp. 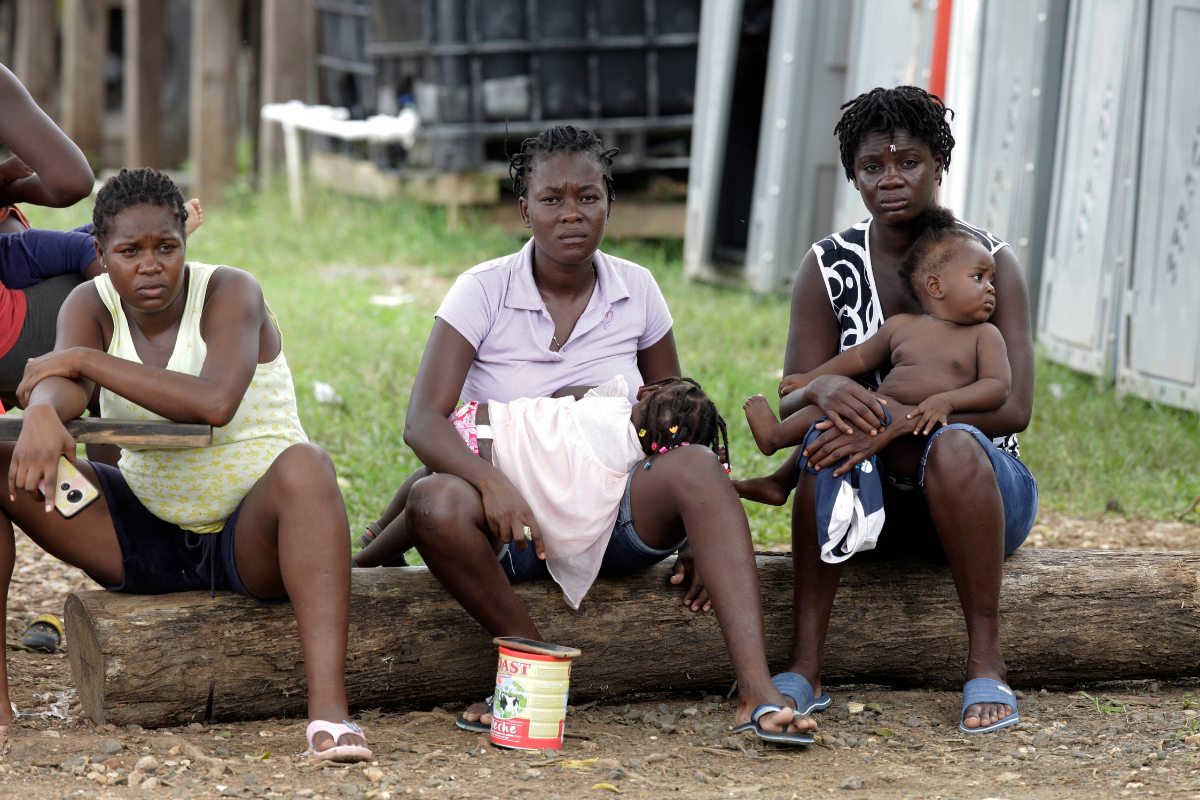 Women with children sit on a log at a migrant camp in Lajas Blancas, Darien province, Panamá, Saturday, August 29, 2020. Panamá, a transit point for virtually every migrant heading from South America to the United States, closed its borders on March 16 to halt the spread of COVID-19. (AP Photo/Arnulfo Franco)

Jean Edoly, a 30-year-old Haitian, is there with his wife and two children, ages 2 and 1, who were born in Chile. “They don’t feed us well. We’re fed like dogs,” he said.

Panamá’s government says it is providing migrants with humanitarian support. It has built, along with the U.N. High Commissioner for Refugees, a new camp with better shelter on the outskirts of Metetí, where it hopes to soon move 400 migrants, especially families with young children.

“The Panamanian government asks them to remain calm. We’ve already made it six months. What remains is little. Light can be seen at the end of the tunnel,” Public Security Minister Juan Pino said during a recent visit to the area.

Panamá has reported more than 92,000 infections and 2,000 deaths from COVID-19. In recent weeks, infections have been stabilizing and deaths declining. The government recently announced a plan to allow the reopening of more economic activity and a lifting of travel restrictions beginning September 7. 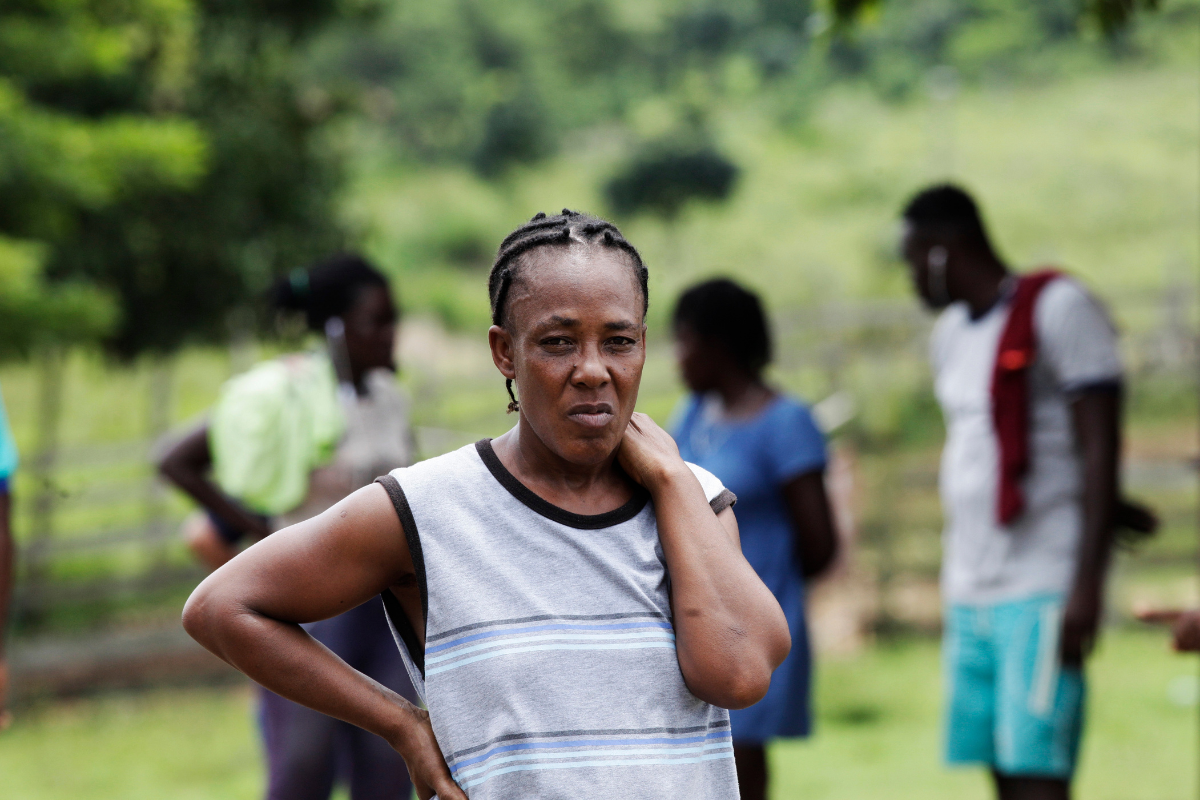 In Lajas Blancas, the migrants did not wear masks or practice social distancing, but Pino said there have been no more than 10 infections among them.

Panamá proposed the flights back to Haiti in early August with support from the International Organization for Migration. But most migrants were not interested, Pino said.

Edoly dismissed that option as “impossible.”

“We have a destiny. We have a dream to realize,” he said, reciting a list of the countries migrants had traveled through. “We want to give our children a better life.”

2 responses to “Stalled by Pandemic, Migrants Press in Quest for Better Life”