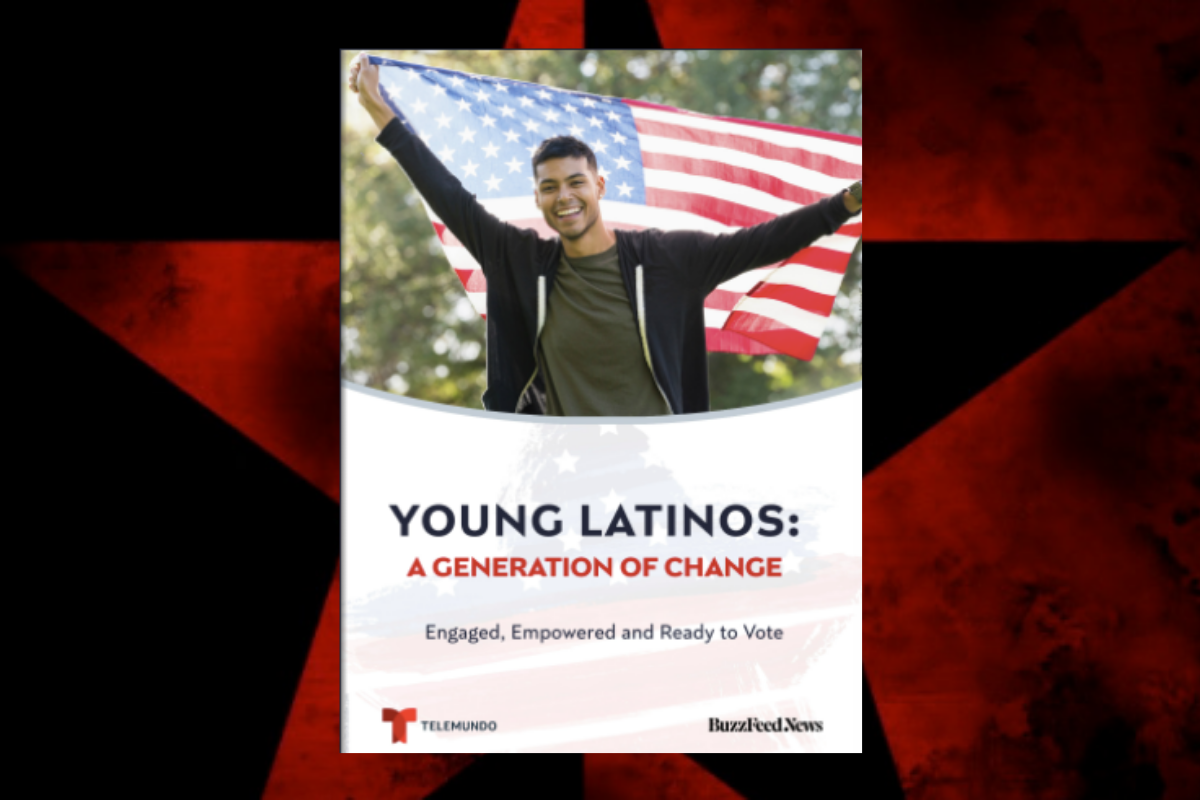 Poised to become one of the largest ethnic groups in the electorate this November, Telemundo, in partnership with BuzzFeed News, released today “Young Latinos: A Generation of Change,” an in-depth study of one of the country’s fastest-growing and most influential voting blocs.

Telemundo conducted this study as part of its company-wide initiative “Decision 2020,” nonpartisan multi-platform news and civic engagement effort to provide Latino with comprehensive information and resources about this upcoming election.

“This new research shows that young Latinos, the majority of which are U.S. born and politically engaged, intend to go to the polls in November at unprecedented levels,” said Mónica Gil, executive vice president and chief administrative and marketing officer at NBC Universal Telemundo Enterprises.

“With one million young Latino voters becoming eligible to vote each year over the next decade, this energized and hardworking ’Generation of Change’ is driven by their conviction to secure a place as central actors in our nation’s future. This report highlights that there is a clear opportunity for candidates and leaders of all political parties to engage and tap into this vibrant group of voters with plans and solutions that acknowledge and speak directly to the issues that matter most to them,” said Gil.

Solid gains in buying power, college attainment, steady earnings, and civic participation over the past several years have given young Latinos growing clout and political influence.

“We are thrilled to be partnering with Telemundo, a vital news organization, to get a better understanding of a rapidly expanding and consequential portion of the electorate,” said Matt Berman, politics editor at BuzzFeed News. “This research gives a great sense of what actually matters to young Latinos, and how they’re engaging with and shaping American politics.”

Findings from the Study

The study shows that the influence of young Latino voters will impact the electoral college in key states like Arizona, California, Florida, Nevada, New Mexico, and Texas. These states account for 144 electoral votes, more than half (53%) of the 270 electoral votes required to win the presidential election. 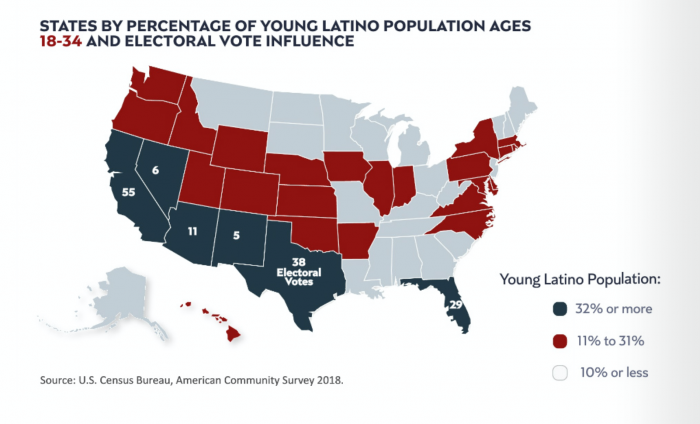 If young Latinos show up to vote this November, they will have a considerable impact on the elections as they did in 2018 where Nine U.S. House Districts in key Latino states changed from Republican to Democrats.

The difficulties and uncertainty of 2020 have provoked young Latinos to increase their likelihood to vote.  Over the past two years, the study shows that young Latinos have stepped forward by signing petitions (68%), boycotting (49%), protesting (46%), or donating money to a cause (46%). 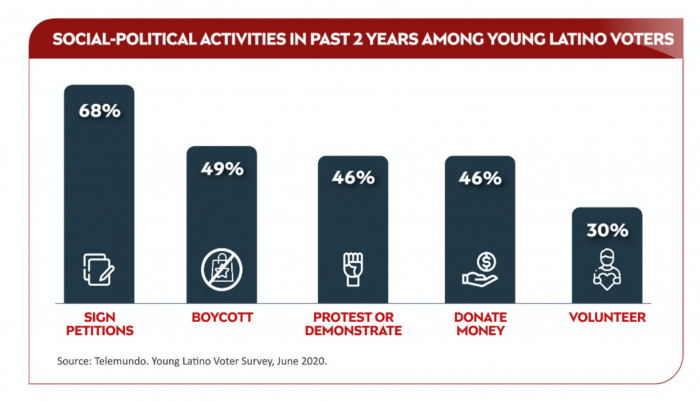 The vast majority of young Latinos surveyed (82%) cited the recent Black Lives Matter protests as motivating them to vote and advocate for their community.

In addition, seven in ten of those surveyed said the coronavirus crisis was also a motivating factor to vote, with 83% of young Latinos saying the pandemic had affected their health or finances. Almost half (48%) said they had suffered financially because of job losses or pay cuts. 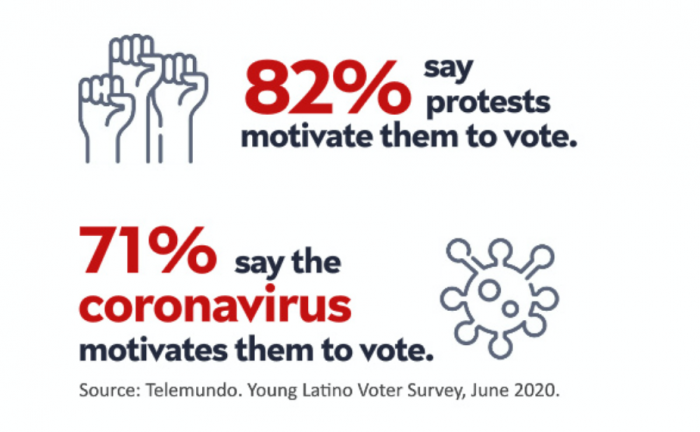 When it comes to political alliances, 37% of young Latinos voters identified as either independent, undecided, or affiliated with a minor party. Half call themselves Democrats and 13% say they are Republicans.

When asked to name a politician who had “shown up” for the Latino community, a third responded “nobody.”

Among those who did name a political figure who supports Latinos, Bernie Sanders, Alexandra Ocasio-Cortez and Joe Biden were mentioned by 6% of young Latinos followed by Trump with 3%.

Inequality is also a major factor of young Latino voters to show up at the polls this November. Over eight in ten young Latinos (85%) said issues addressing racial inequality and systemic violence are motivation for them to vote.

And almost three-quarters (73%) said either they, their family or friends, have been target of racism over the past two years. 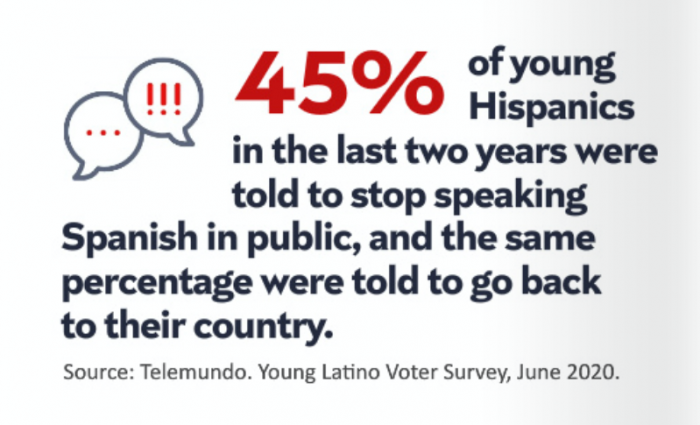 Of the 2020 presidential candidates, 17% of young Latinos say they personally identify with current President Donald Trump, and 35% identify with Joe Biden. But, despite their low level of excitement for either candidate, 60% would vote for Biden if the elections were held tomorrow, and 19% for Trump. 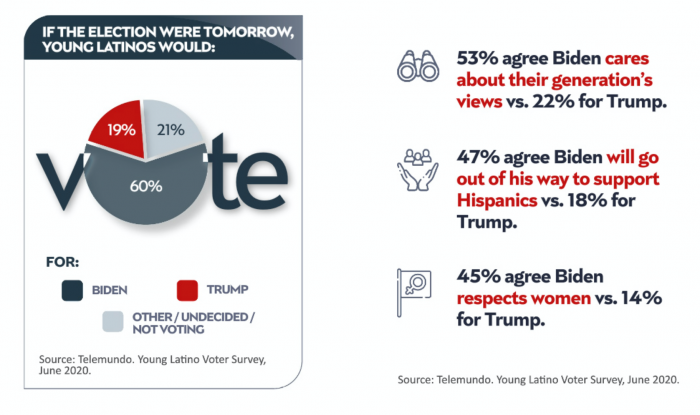 Moreover, among other issues, 57% of Latino voter said that reducing police brutality motivates them to vote, while 51% said affordable healthcare for all, equal rights, and fair paid for women are motivating factors.

You can read the full study here.