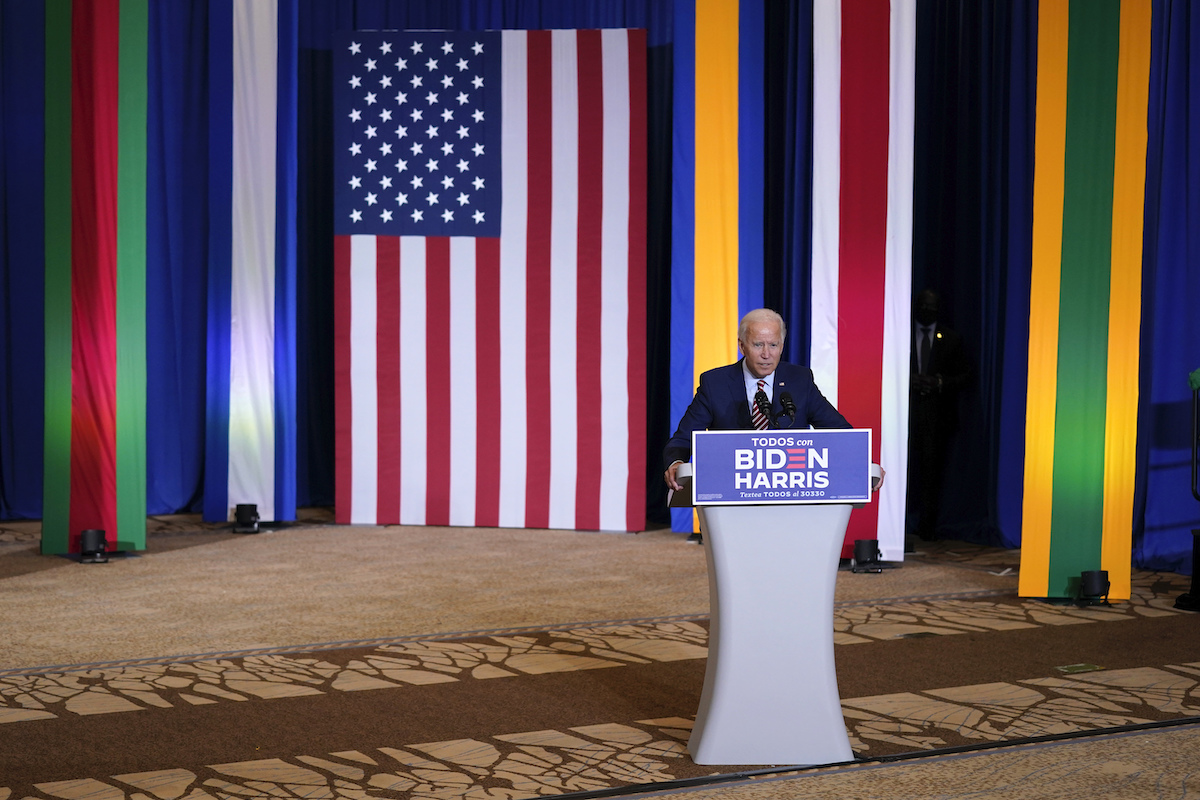 By ALEXANDRA JAFFE and WILL WEISSERT, Associated Press

KISSIMMEE, Fla. (AP) — Joe Biden made his first trip to Florida as the Democratic presidential nominee on Tuesday with an urgent mission to boost support among Latinos who could decide the election in one of the nation’s fiercest battleground states.

“More than any other time, the Hispanic community, Latino community holds in the palm of their hand the destiny of this country,” Biden said during a Hispanic Heritage Month kickoff event in Kissimmee. “You can decide the direction of this country.”

A win for Biden in Florida would dramatically narrow Trump’s path to reelection. But in a state where elections are often decided by a percentage point, there are mounting concerns that Biden may be slipping, particularly with the state’s influential Latino voters.

An NBC-Marist poll released last week found Latinos in the state about evenly divided between Biden and Trump. Democrat Hillary Clinton led Trump by a 59% to 36% margin among Latinos in the same poll in 2016—and Trump won Florida by about 1 percentage point.

To regain lost ground, Biden made the case Tuesday night that he would be a better president for Hispanics than Trump, touting his commitment to immigration reform and a new plan to support Puerto Rico’s economy.

“Donald Trump has failed the Hispanic community time and time again, and that’s not a secret,” Biden said. “Whether it’s in his heinous act of separating children from their families at our border, or his repeated attacks on Dreamers, or his neglect of the people of Puerto Rico after Hurricane Maria, or his repeated failures to make sure essential workers have the personal protective equipment they need.”

Still, Hispanic voters in Florida tend to be somewhat more Republican-leaning than Hispanic voters nationwide because of the state’s Cuban American population. Nationally, little public polling is available to measure the opinions of Latino voters this year and whether they differ from four years ago.

But Democrats aren’t taking chances. Billionaire Mike Bloomberg has pledged to spend at least $100 million to defeat Trump in Florida.

And by spending his day along the Interstate 4 corridor, Biden is devoting time to one of the most critical regions of the state. While Republicans typically post big numbers in the northern and southwestern parts of the state and Democrats are strong in coastal cities, campaigns typically battle it out for every vote in central Florida.

Biden’s first event, in Tampa, focused on veterans and was aimed at pushing a potential opening with military voters, who broadly supported Trump in 2016 but are seen as potentially persuadable because of controversial remarks the president reportedly made mocking American war dead as “losers” and “suckers.” Trump has denied making the remarks, first reported through anonymous sources by The Atlantic, but many of the comments were later confirmed by The Associated Press.

“Nowhere are his faults more glaring and more offensive, to me at least, than when it comes to his denigration of our service members, veterans, wounded warriors who have fallen,” Biden said. Speaking of his late son Beau, who served overseas as a Delaware Army National Guard member, Biden said, “He’s gone now, but he’s no sucker.”

Biden’s decision to celebrate Hispanic Heritage Month in Kissimmee reflects a focus on the state’s rapidly growing Puerto Rican community. Many Puerto Ricans relocated to Florida after Hurricane Maria devastated the island in 2017.

The campaign announced a new plan Tuesday focused on boosting Puerto Rico’s economy and helping the island recover from Maria. Biden would create a federal working group focused on aiding Puerto Rico in rebuilding and would forgive disaster relief loans to Puerto Rican towns and invest in Puerto Rico’s power and schooling infrastructure and health care services, among other things. He also expressed support for Puerto Rican statehood Tuesday night.

“I happen to believe statehood would be the most effective means of ensuring that residents of Puerto Rico are treated equally, with equal representation on a federal level, but the people of Puerto Rico must decide, and the United States federal government must respect and act on that,” he said.

Puerto Ricans may be more open to Biden than Cuban Americans concentrated in Miami are. Many of them are attuned to Trump’s message that the Democratic ticket would embrace socialism.

Indeed, surrogates for the Trump campaign focused on Cuban immigrants during a call with reporters. Florida Lt. Gov. Jeanette Nuñez, a Republican, accused Biden of trying to “feign interest in the Hispanic community” after “neglecting us.”

She said a Biden presidency would, among other things, appease and enrich Cuba’s leadership at the expense of the people. Some foreign policy analysts, however, say the Trump administration’s tough economic restrictions on Cuba only contribute to the oppression of the Cuban people.

Biden, who hasn’t been to Florida since last October, has struggled with Latinos in part because of the record-setting number of deportations when President Barack Obama was in the White House. Biden has apologized for that policy.

But unlike his Democratic rival Bernie Sanders, who used strong support among Latinos to notch key primary victories in Nevada and California, Biden has refused to adopt the most liberal positions in his party—especially when it comes to calling for decriminalizing illegal crossings of the U.S.-Mexico border and halting all deportations indefinitely. He supports a 100-day moratorium on deportations. 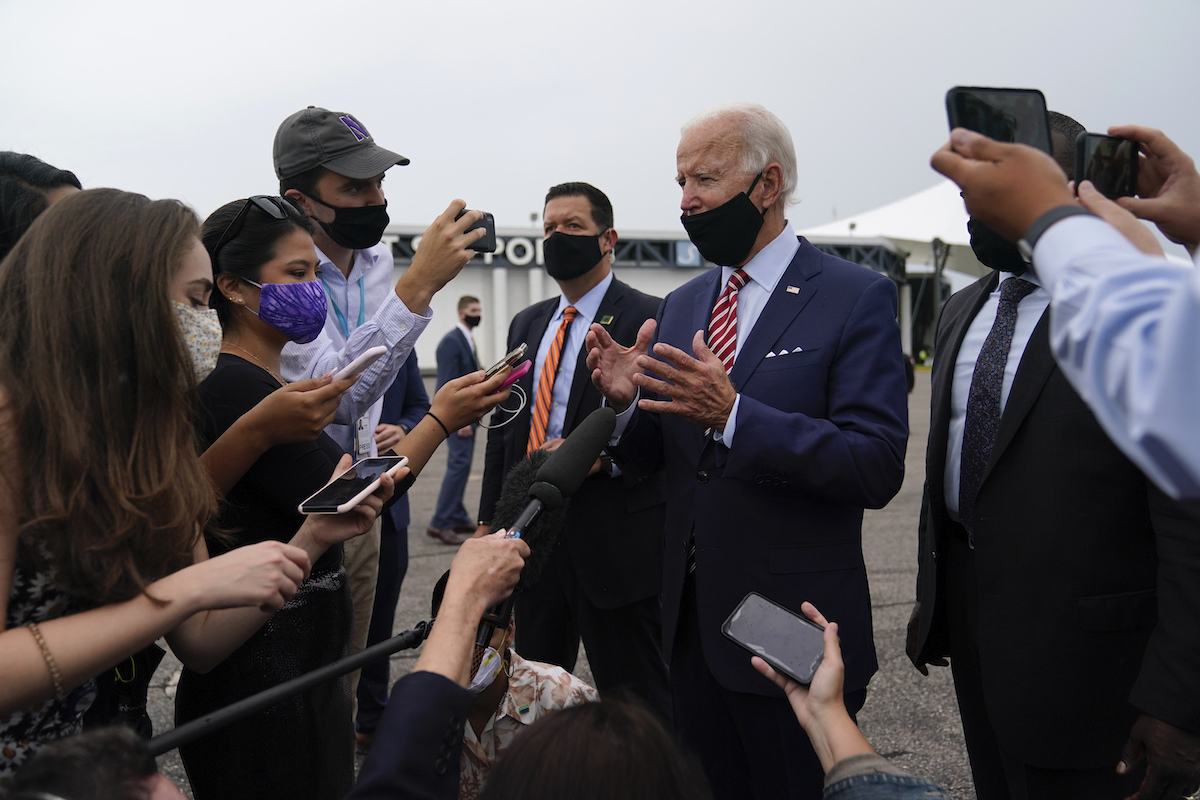 As for Trump, despite many of his anti-immigration policies, some Latino voters have responded positively to the president’s embrace of religious conservative positions and his warnings of protest-related violence and socialism. Trump also frequently visits his Mar-a-Lago resort in Florida, and the president votes absentee in the state.

Ana Navarro-Cárdenas, a former Republican strategist who has endorsed Biden and spoke at one of his campaign events, said the Tuesday night event “signaled Biden plans to fight for and work for Hispanic support.”

But she added that she hopes to see the Biden campaign ramp up their outreach to Hispanic voters in Florida to mitigate any damage done by the Trump campaign.

“Joe needs to come to South Florida, look us in the eye and combat the ridiculous Republican narrative that he’s some sort of socialist,” she said. “He needs to call out the lies and Trump’s hypocrisy.”