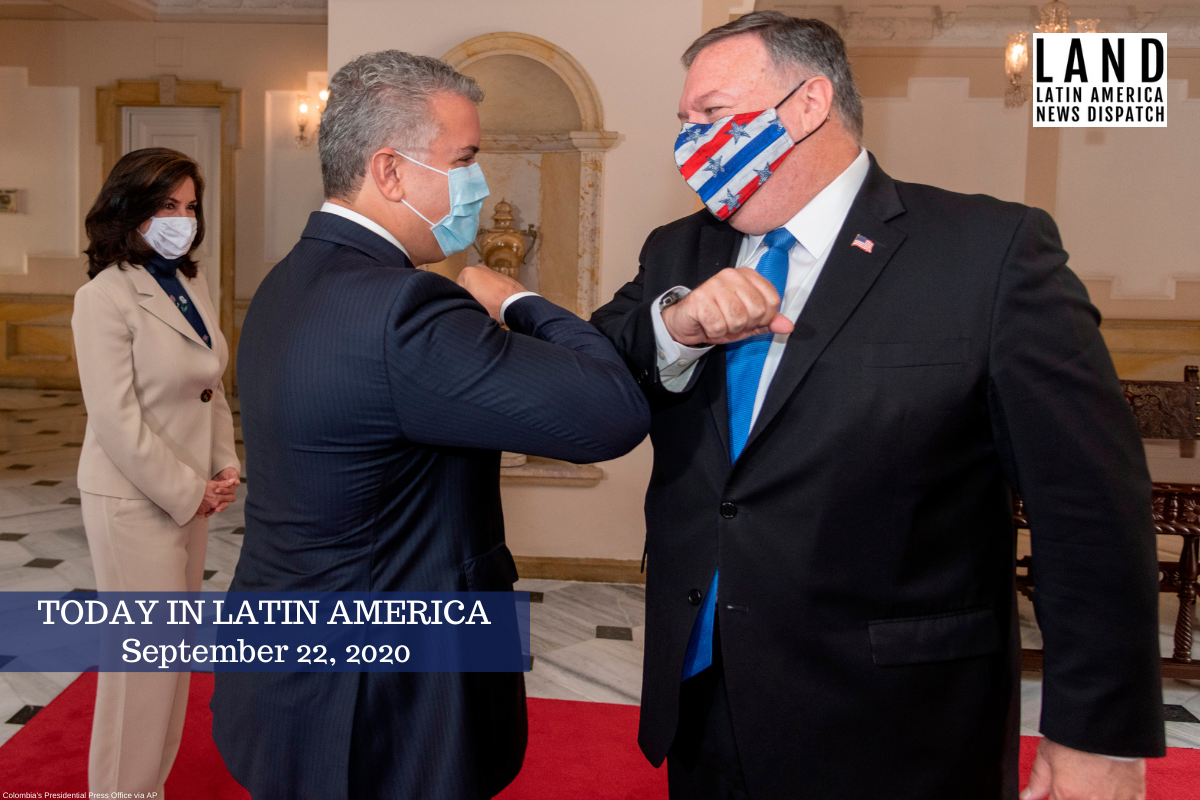 VENEZUELA: U.S. Secretary of State Mike Pompeo announced new sanctions on President Nicolás Maduro on Monday. The sanctions are part of the Trump Administration’s “maximum pressure campaign” against Iran. According to Pompeo, corrupt officials from Tehran have worked with the “illegitimate regime” of Venezuela to “flout the U.N. arms embargo” for nearly two years.

The Trump administration has been unilaterally enforcing a U.N. arms embargo despite an August U.N. Security Council vote to not extend the punitive measures and the 2015 Iran Nuclear Deal. The U.N. imposed arms embargo was set to expire in October due to the negotiated agreement. Trump withdrew the U.S. from the Iran Nuclear Deal in 2018 and resumed harsh sanctions despite objection from the global community.

PARAGUAY: The family of former Vice President Óscar Denis on Sunday publicly asked the Paraguayan People’s Army (EPP) for proof of life after 12 days of captivity. Denis was kidnapped by the guerrilla group on September 9 from his ranch in Amambay department. Denis reportedly tested positive for coronavirus before his kidnapping and suffers from Type 2 diabetes. The family of the victim handed out two million dollars worth of food and supplies to 40 indigenous communities as a condition by the armed group to liberate Denis, but have gone four days without hearing from the former vice president as well as the EPP.

ECUADOR: Eruptive activity at the Sangay volcano blanketed six of the country’s 24 provinces with ash on Sunday. Sangay is located in the Amazonian province of Morona Santiago in what is dubbed the “Avenue of the Volcanos,” located 120 miles south of the capital Quito. Flights at Guayaquil’s international airport were suspended along with scheduled soccer matches. The provinces of Bolívar y Chimborazo are most at risk. The half a million inhabitants of the latter have been on yellow alert since June due to volcanic activity.

DOMINICAN REPUBLIC: The Prosecution Office Specialized in the Prosecution of Corruption (PEPCA) will open a new investigation into the Odebrecht bribery case. In July 2018, the former Attorney General of the Dominican Republic Jean Alain Rodríguez released a provisional archive in favor of the eight Dominican politicians involved in the case. Yesterday, the Attorney General and new head of PEPCA Wilson Camacho claimed that he is in the process of reviewing the archive to determine the next steps in the investigation. Odebrecht is a Brazilian construction conglomerate that became the figure behind a bribery scandal across Latin American countries. Between 2001 and 2016, the company paid $788 million in bribes to various politicians and for presidential election campaigns in exchange for 100 projects in 12 countries.

HAITI: Residents of Port-au-Prince protested last Sunday against President Jovenel Moïse’s appointment of the new Provisional Electoral Council (CEP) members. The demonstrations included the University of Haiti’s law students condemning the death of Monferrier Dorval, who was a lawyer, constitutional scholar and head of the Port-au-Prince bar. He was killed after giving a radio interview addressing topics of constitutional reform and election. In another demonstration last week, a group called Fantom 509 burned down a restaurant belonging to a newly-named police administrator. The group is allegedly made up of Haitian National Police officers and was declared a terrorist group by the Haitian government in May.

HONDURAS: The floating trash and plastic from the basin of the Motagua River continues contaminating the beaches of Omoa, a small town on the northwest Caribbean coast of Honduras. The committee of Omoa has called for its people to show “more belligerence” towards the Honduran government to formulate a final solution to the “environmental massacre” with all the trash that had arrived at Omoa, rejecting any temporary solutions. The trail of waste spans 14 departments and 90 municipalities in Guatemala as well, despite 100 tons of trash having been removed from the river from January to August of this year.

MEXICO: Seven government officials accused of taking bribes from federal police filed an amparo lawsuit against an arrest warrant issued last week. The lawsuit asks for protections for the respective officials, which include numerous former employees from the department of Financial Resources. The employees were allegedly involved in a money laundering scheme diverting more than 2.5 million pesos in federal funds between 2013 and 2017. The warrants also charge the officials with organized crime. Only one former official involved in the case has been detained and prosecuted so far.