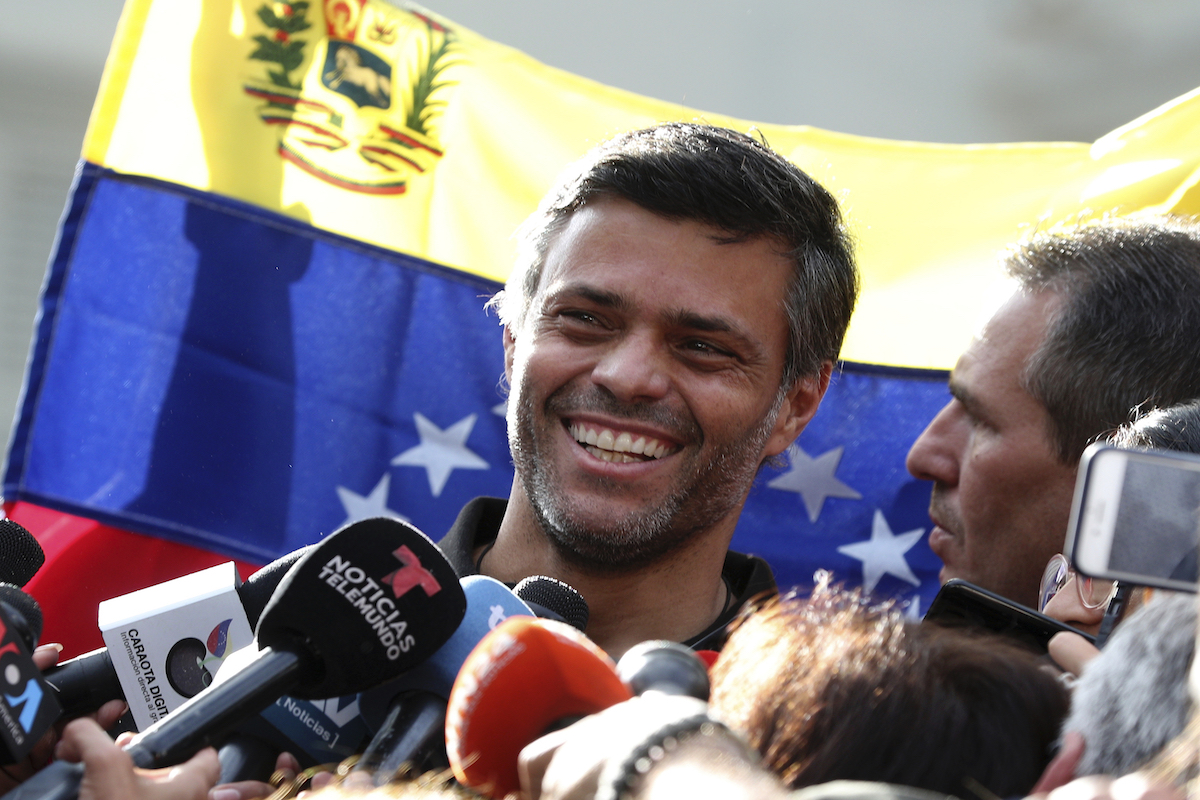 Venezuelan opposition leader Leopoldo Lopez smiles during a press conference at the gate of the Spanish ambassador’s residence in Caracas, Venezuela, Thursday, May 2, 2019. López said he expects that the country’s military will step up to overthrow President Nicolas Maduro despite setbacks. (AP Photo/Martin Mejia)

MEDELLÍN, Colombia (AP) — After more than six years in confinement, Venezuelan opposition leader Leopoldo López is a free man and has been reunited with his family in Madrid.

López arrived Sunday in the Spanish capital following what aides described as a whirlwind escape from the Spanish ambassador’s residence in Caracas where he had been holed up since leading a failed U.S.-backed military putsch against Nicolás Maduro in April 2019.

Two people close to López said he fled Venezuela by sea, arriving in the nearby Caribbean island of Aruba on Friday. They spoke on condition of anonymity because they weren’t authorized to discuss the details of the getaway, which followed months of planning.

Aides insisted the departure wasn’t the result of negotiations with the government, as many supporters and even opponents of the socialist government have speculated.

On Sunday, Maduro removed his interior minister, Gen. Nestor Reverol, who oversees the SEBIN intelligence police that had a heavily armed contingent outside the ambassador’s residence. Without referring to Lopez, Maduro said Reverol would be replaced by former Defense Minister Carmen Meléndez and instead be assigned to a new role as electricity minister.

Officers from SEBIN have detained several people working at the diplomatic mission, including a woman who served meals to Lopez and private security guards, according to López’s allies.

SEBIN on Saturday tried to search the homes of officers with Spain’s national police posted to the diplomatic compound in search of information about López’s whereabouts.

“We call attention to this new abuse by the dictatorship’s henchmen,” López’s Popular Will party said in a statement, referring to the detentions.

Venezuela’s government, meanwhile, issued a statement Sunday blasting Spain for assisting the “terrorist” López in his escape. It called Spanish Ambassador Jesús Silva the “main organizer” and “accomplice” in López’s flight, but refrained from expelling the diplomat, who was recently recalled and is scheduled to wrap up his assignment in Caracas next month.

López, 49, has yet to make a public appearance. But he said Saturday night on social media that the decision to leave his homeland had not been “simple.”

“We’ll continue working day and night to attain the freedom that we Venezuelans all deserve,” López tweeted late Saturday.

“After seven years of persecution and unjust imprisonment inside Venezuela, Leopoldo López is still not totally free, like all Venezuelans, so long as there exists a dictatorship that violates the human rights of the people,” his party said.

It is unclear how López left the ambassador’s residence, given the heavy state security presence permanently stationed outside the property. Travel by land has grown increasingly difficult because of widespread fuel shortages and checkpoints manned by security forces have proliferated across the country.

In a message directed to Maduro on Twitter, U.S.-backed opposition leader Juan Guaidó said his political mentor had gotten out of Venezuela by “evading your repressive apparatus.”

López was sentenced in 2015 to nearly 14 years in prison after being convicted of inciting violence during anti-government protests in which three people died and dozens were wounded. He was released from prison and placed under house arrest after more than three years in a military jail.

Even while confined, López has remained an influential figure in Venezuela’s opposition, advising Guaidó, who is recognized by more than 50 nations as the country’s interim president because Maduro’s 2018 re-election was considered illegitimate.

But after drawing tens of thousands of people to the streets last year, the opposition has struggled to regain momentum. Maduro remains firmly in control of the nation’s military and nearly all other government functions.

The government also is preparing to retake control of the National Assembly, the last major domestic institution in opposition hands, in December legislative elections that Guaidó has vowed to boycott.

López had long stubbornly refused to leave even when his wife and children fled last year to Spain, where his father has citizenship is a member of the European Parliament.

López joins dozens of anti-government figures who have fled Venezuela over recent years, many leaving covertly to avoid potential persecution or jail time. Millions of ordinary citizens have left due to the country’s collapsing economy.

The years López spent at a military prison solidified his image as a man willing to risk his own skin to rid the country of Maduro.

He sought allies among his former jailers in the military and in 2019 reappeared on a highway overpass with a small band of national guardsmen calling for an uprising against Maduro. The putsch was easily quashed and López took refuge in the ambassador’s residence.