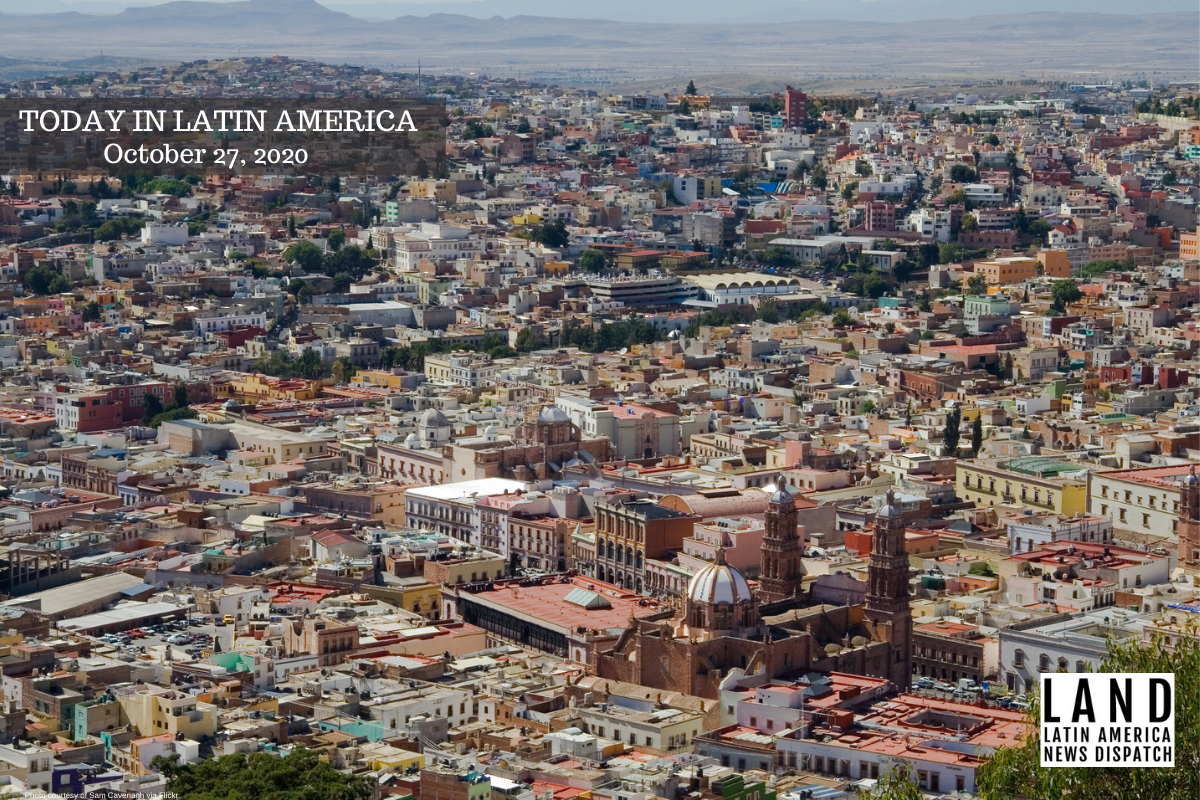 MEXICO: It was a violent weekend in the Mexican state of Zacatecas, as 26 people were killed in what authorities say were clashes between rival cartels. Most of the killings took place in one incident on Saturday evening in the municipality of Jerez, where a confrontation led to a car chase which left 14 people dead. Meanwhile, eight people were killed in Fresnillo, and another four in Guadalupe. Authorities and security experts say that the killings were related to a conflict between two rival cartels, Sinaloa and Jalisco New Generation.

The Sinaloa Cartel has operated in the state for years, whereas the Jalisco New Generation Cartel has been expanding its territory into Zacatecas since earlier this year. Both cartels have also been making alliances with smaller criminal groups in the state. Violence in Zacatecas, a sparsely populated state in north central Mexico, has been rising for months. Between January and August of 2020, 753 people were killed. This is an 89% increase from the same period in 2019, giving Zacatecas the fifth-highest murder rate in the country.

BRAZIL: Vice President Hamilton Mourão announced on Monday government plans to extend the military’s deployment in the Amazon rainforest for another five months. The military deployment has been the government’s response to illegal deforestation, a lead cause of fires that caused international outrage last year. The army’s deployment started in May of this year. Mourão, a former general, heads the National Council of the Amazon. The council is a governmental body meant to “coordinate and implement” policies relating to the Amazon.

CHILE: The Election Service emitted its final bulletin on Monday for the constitutional plebiscite. According to the electoral body, there was a 52% voter turnout, with over 7.5 millions Chileans voting. The plebiscite had the highest voter turnout in the country’s history. Chileans went to the polls on Sunday, with 78.2% of voters choosing to change the dictatorship-era constitution.

BOLIVIA: The president of La Paz’s Justice Tribunal annulled the arrest warrant against former President Evo Morales on Monday. The apprehension warrant was issued for terrorism charges from when Morales promoted a 12-day blockade of cites during the 2019 election crisis that saw him ousted from power. Judge Jorge Quino declared that the former president’s rights were neglected because he was not given a chance to defend himself. Prosecutors from the city of La Paz said the decision would not stop investigations. Morales told the press that his possibility of returning to Bolivia depends on the “social movement” that is still being debated.

PUERTO RICO: Gov. Wanda Vázquez issued an executive order on Monday declaring the fight against gender-based violence a “priority service” despite various sectors’ call for a state of emergency. Vázquez declared a national alert in September 2019 in face of a rise of incidents of gender violence and under pressure from women’s rights organizations. After a year’s delay, Vázquez, expressed content with the executive order and presented a protocol of action that defines the responsibilities of government agencies regarding violence against women. The responsibilities include four pillars: prevention, effective attention, adequate management and accounting for incidents of violence. There have been 38 femicides so far this year in Puerto Rico, according to police statistics. Femicide has increased by 83% during quarantine in comparison with the same period last year.

DOMINICAN REPUBLIC/HAITI: After a meeting almost four hours long, authorities from both countries reached an agreement regarding the reopening of their shared border to allow trade. The agreement allows nationals of both countries to work in different sectors of the economy, to travel with no problem, and to return to their country after a working day. The tension at the border started earlier this year with Dominicans impeding Haitians from purchasing goods in the Dominican Republic, and was intensified by armed groups of Haitian civilians confiscating goods of their compatriots on their side of the border. The Dominican Chancellor Roberto Álvarez also responded to a Haitian publication, explaining that the meeting was not to talk about a new demarcation of the border.

COSTA RICA: Authorities eliminated the requirement of a negative coronavirus test to enter the country by air on Monday, applicable to both foreign tourists and nationals. This leaves only two requirements: an epidemiological form required by the Ministry of Health and international medical insurance, with no quarantining needed for tourists. Minister of Tourism Gustavo Segura explains that these measures aim to incentivise people to visit Costa Rica during its tourism high season, starting in November. Costa Rica started to gradually open its aerial border with the intention to revive its tourism, hit hard by the COVID-19, and will open its airports to tourists from around the world beginning November 1.

UNITED STATES: Rising COVID-19 case numbers in El Paso, Texas, have pushed local leaders to lock the city down, urging residents to shelter in place for two weeks and imposing a mandatory curfew from 10 a.m. to 5 p.m. El Paso recorded a record 1,443 new cases on Monday and 853 hospitalizations, of which 180 were in intensive care. Meanwhile, El Paso County officials say that county hospitals are at 100% capacity as the virus has surged over the last three weeks. Texas Gov. Greg Abbot says that the state government will work to increase hospital capacity in the area by setting up 100 beds in the El Paso Convention Center and sending mobile medical units to El Paso hospitals.

MEXICO: The Mexican Senate will impose new measures to prevent the spread of COVID-19, including requiring senators to get tested for COVID-19 before being allowed to attend in-person sessions. The Senate’s Political Coordination Committee made the decision after Senator Joel Molina died of COVID-19 on Saturday, and two other senators tested positive for the virus. The committee also decided that the Senate will only meet on Wednesdays, Thursdays and Fridays, and that staffers will not be allowed to attend sessions.