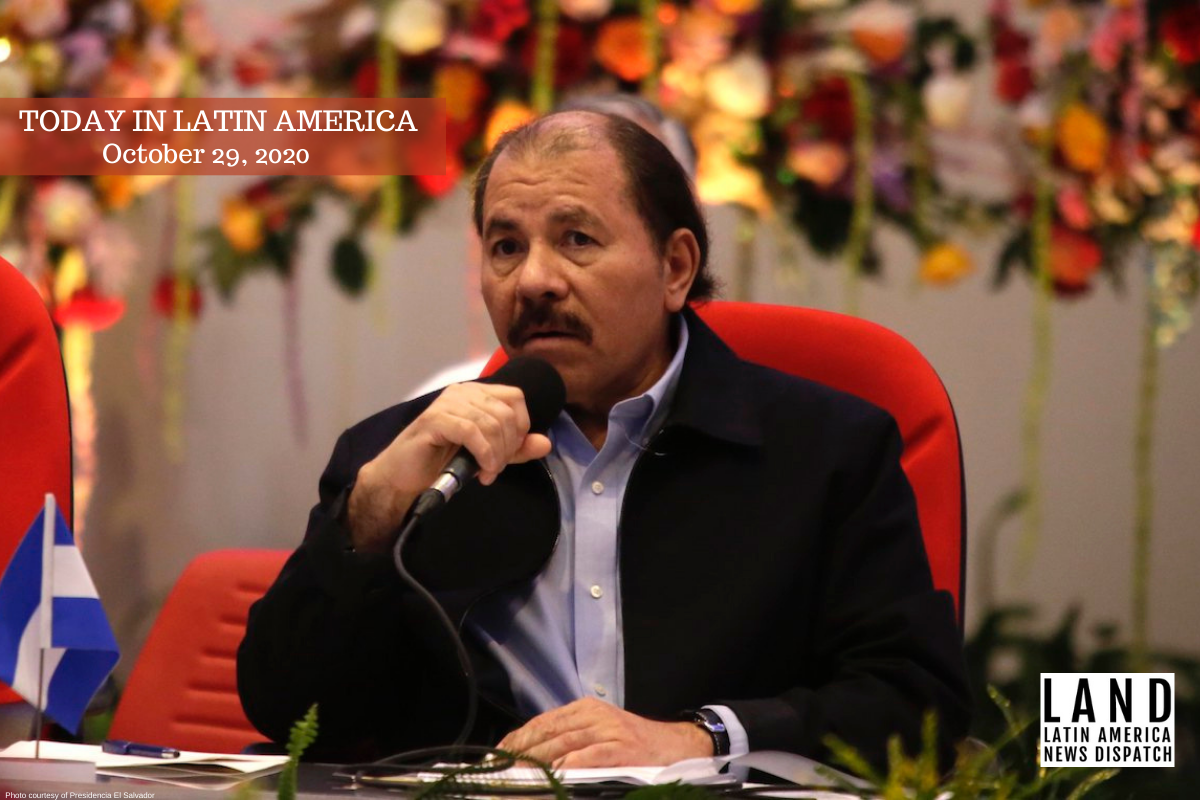 NICARAGUA: In a majority 70-16 vote, Nicaragua’s legislature on Tuesday approved a bill mandating prison sentences for people who commit cybercrimes. The approval of this law allows the prosecution of acts such as hacking, identity theft or computer espionage, but also of people who “spread false information.” The Special Cyber Crimes Law authorizes penalties from one to 10 years in prison for those accused of any of the 30 crimes it typifies. Some of these crimes include “those who promote or distribute false or misleading information that causes alarm, terror, or unease in the public.”

Critics of the bill, which was pushed by President Daniel Ortega’s ruling Sandinista Front party, claim it is an attack of freedom of expression, and allows the government to control and censor information on the internet. Human rights groups describe it as a threat to free speech, and many journalists worry that the law is too broad and could affect freedom of the press. The law’s Article 30 states that publications that damage the honor, prestige or reputation of a person will carry a penalty of between one to three years in prison and a fine in salary.

CHILE: The Constitution Commission of the Chamber of Deputies on Tuesday approved 11-1 of the idea of legislating a bill that would allow a second withdrawal of 10% of the funds from the Administration of Pension Funds (AFP). The first pension withdrawal took $16 billion from the AFP system and boosted the economy but left many with no pension savings. Deputy Jorge Alessandri, from the Independent Democratic Union, was only one against the bill, arguing that the state should pay for the crisis, not Chileans. Deputy Eduardo Durán, from the National Renewal party, explained that the State is not in a better place to support the citizens in this crisis. President Sebastian Piñera met with the Treasury and Labor departments to analyze the next steps. Congress is also debating a wider pension reform, and pension is likely to be among key debate topics when drafting Chile’s new constitution.

BOLIVIA: The Bolivian Chamber of Deputies and Senate initiated a reform that will allow certain procedures in Congress to pass with just an absolute majority instead of two-third of the votes. Senator Omar Aguilar of the Movement Toward Socialism (MAS) party justified the decision, saying that it would allow the legislature to provide more “governability.” The opposition linked the move to authoritarianism. Ex-President Carlos Mesa denounced the modification as an “unacceptable and illegitimate ploy” and threatened to not attend the inauguration of President-elect Luis Arce, of the MAS party.

Meanwhile, MAS Senator Andrónico Rodríguez confirmed that, after being exiled for more than a year for election fraud, ex-President Evo Morales is set to return to Bolivia on November 11, one day after Arce takes office.

VENEZUELA: An Iranian cargo plane transporting armaments landed in Caracas on Tuesday despite United States sanctions. The Trump administration tried to extend its embargo restricting Iran’s purchase and sale of weapons indefinitely in the United Nations Security Council but failed, leaving the embargo to expire on October 18. U.S. Special Representative for Venezuela Elliot Abrams said that the U.S. would not tolerate nor permit the transfer of armaments, while another Trump administration source threatened to destroy the Iranian missiles to be sent to Venezuela. President Nicolás Maduro last Friday announced the creation of a military council that aims to make its weapon system independent with help from other countries, including China, Rusia, Iran and Cuba.

COLOMBIA: More than 600 Indigenous families in Leticia were allegedly evacuated violently by the Colombian National Police Riot control unit Mobile Anti-Disturbance Squadron, leaving various people injured and three dead during the confrontation, according to the Regional Indigenous Council of Cauca. The 625 families were putting up shacks in land they occupied to avoid contracting COVID-19 and were destroyed by the control unit. The Leticia community, the Regional Indigenous Council of Cauca and National Indigenous Organization of Colombia condemned the excessive violence during the operation, and called out to human rights organizations to pay attention to the situation.

CUBA: Over 400 Western Union offices will close in Cuba due to new embargo regulations imposed by the Trump administration. The new order announced Tuesday prohibits companies controlled by the Cuban military from participating in processing remittances. United States Secretary of State Mike Pompeo said in a statement that the measure would cut off funds that flow to Cuban security agencies accused of human rights violations in Cuba and Venezuela. Fincimex, the Cuban military company that controls remittances to the island, said on Facebook that it is unwilling to transfer the remittance business to public entities. Western Union also claims it will continue to look for alternative solutions to maintain its service in the country.

GUATEMALA: Health care workers claim they were fired after speaking up about poor or lack of treatment and protection against COVID-19. The Office of the Human Rights Ombudsman, an independent state institution, has documented layoffs, transfers and other acts of retaliation against health workers like assigning employees responsibilities out of their duties, such as transporting cadavers. The office also says health workers lack personal protective equipment, with some creating their own fabric masks from home or putting garbage bags over their scrubs. The government said 44 health care workers have died from COVID-19 since September 25, but the San Juan de Dios General Hospital Workers Union, a national health workers union, claims the total is nearly 10 times higher across the public health sector.

MEXICO: Ciudad Juárez reported 450 new COVID-19 cases in the last 24 hours, a brutal increase in cases. Arturo Venezuela, head doctor in the northern region, announced that the city went from having 12,476 cases to 12,926 in the last 24 hours, with 849 people still hospitalized and 156 intubated. At the state level, deaths have increased to 1,827. The border city of El Paso, Texas, also recorded a surge in coronavirus cases.

MEXICO: President Andrés Manuel López Obrador proposed to place a blanket ban on subcontracting or outsourcing jobs in an effort to stop the mistreatment of employees by private companies. The leader announced he will send a bill so that the mechanism utilized by companies to evade fiscal and employer obligations disappears. The Senate was already working on a way to regulate outsourcing. The president, however, said Wednesday morning that the government will most likely terminate the labor scheme, though 8 million people in the country work under the outsourcing scheme.

MEXICO: Alfonso Durazo will present his official resignation as Secretary of Security this Friday. The soon-to-be ex-secretary will renounce his charge in order to run as governor of the state of Sonora. During his leadership, there has been an increase in femicides in the country of 9.8% and 65,000 cases of homicides. Durazo said that, although he would be leaving his post, he will still be involved in matters of crime and continue working alongside the president to make the country a safer place.