Racism: What Election Polls and Strategists Failed to Account For (OPINION) 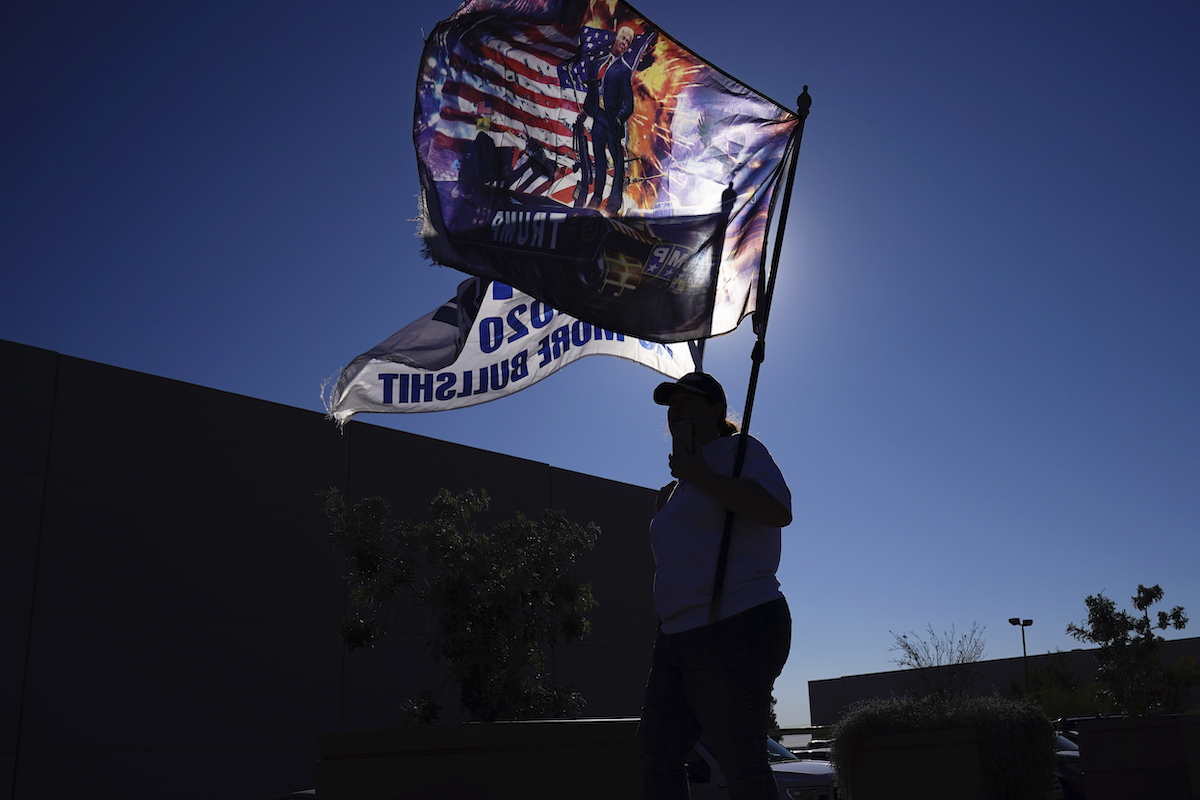 A supporter of President Donald Trump carries Trump flags after a news conference by the Trump campaign in front of the Clark County Election Department, Thursday, November 5, 2020, in Las Vegas. (AP Photo/John Locher)

BOSTON — The “blue wave” never materialized—socially, culturally, or politically. Strategists and commentators are now scrambling to explain the colossal failure and chaos. There’s widespread shock and awe. But it’s really not complicated or surprising. The bottom line is that political analysts and polls failed to account for prejudice and hate. Regardless of the outcome, we must acknowledge and accept that bigotry drove this presidential election.

Racism and xenophobia are at the root of what motivates support for candidates like Trump—and to avoid this reality or to pretend otherwise exacerbates the irreparable injury and harm inflicted on people of color and immigrants. It also deprives us of an opportunity to make urgent legal, policy, and institutional changes that can systematically and structurally reverse the legacy of racism.

Since the 2016 election, there’s been tremendous resistance to name —or tame— the elephant in the room: Nearly all of us have racist family members who voted for Trump. Yet we minimize and dismiss this reality pretending that “complex” dynamics are at play. It’s a delusional disorder affecting not just individuals, but also institutions desperately avoiding the issue of racism. Even sophisticated think tanks have attributed election results to social and economic pressures. Devoid of meaningful analysis surrounding the pivotal role that racism plays, these race-neutral explanations were useless in 2016, and they remain unavailing today. It’s time that we —individually, collectively and institutionally— wrestle with the discomfort of talking about the bigots in our midst.

Our collective and systemic reluctance to address unchecked bigotry and hate manifests in overt and subtle ways, especially during this election.

For example, in small towns across America, even in so-called “progressive” Massachusetts, racist Trump-related electioneering took place in polling sites, particularly in suburban and rural communities where trucks blocked intersections and parking lots. While in some places local elected officials responded swiftly to enforce election laws prohibiting electioneering by removing these barriers to the ballot box, in other communities the response was shockingly subdued. The muted response was the political, policy, and practical equivalent of: “You’re complaining about my uncle who is out there right now shouting racist things at voters. Can’t we just let him do his Trump thing?”

Let’s be clear: The idea that your racist uncle’s political activity doesn’t hurt or harm anyone is simply untrue. Racism isn’t a victimless crime.

Our reluctance to connect routine expressions and day-to-day manifestations of bigotry to our collective and historical memory of racism in America compounds exponentially the victimization and disenfranchisement of people of color and immigrants. The abrupt dismissal of legitimate complaints and concerns surrounding racist Trump electioneering in polling sites across the country is part-and-parcel of voter suppression.

We can’t ignore the fact that voters in polling sites across the country, including Lowell, Massachusetts, experienced a litany of racist and xenophobic vitriol. This has a profound chilling effect. Yet unchecked racists unleashed voter intimidation at countless polling sites locally and nationally. The bar was set so shamefully low that unless armed militias were deployed, other expressions of hate were tolerated.

Instead of meaningfully addressing the issue of racism through formal condemnations of bigotry, we’re now pontificating about the geographic and cultural “distance” between coastal and interior communities—not just in Massachusetts, but nationally. We rather focus on the purported “blue/red” binary —along partisan lines— instead of talking about Black, Brown, and Asian lives.

Above all, in the aftermath of George Floyd’s murder, we must acknowledge that this election was marked by visceral anti-blackness—not just from white voters but also by people in other communities, including my own Latinx family.

Right now, we need less excuses, polls and methodologies and we need more soul-searching. We need individual, collective, and institutional introspective thinking, particularly around anti-racism and anti-blackness. This means that we can’t compartmentalize the racist election results thinking: “This doesn’t affect me.” It’s not enough for us to impulsively think: “All I can do is be a good person.” It’s not enough for us to pat ourselves in the back thinking: “I didn’t discriminate anyone today.” We must all be actively and unequivocally anti-racist to dismantle structural and systemic bigotry.

Regardless of the election outcome, we must also acknowledge that no one is coming to magically save us—not from Washington, D.C. or anywhere else. Moving forward, we must build bridges across differences and forge diverse partnerships and alliances.  We must use this opportunity —individually and collectively— to recommit to dismantling all forms of racism and discrimination.

The path forward is clear: it’s confronting the legacy of racism —root and stem— within ourselves, our families, our communities, and our institutions.

Iván Espinoza-Madrigal is the Executive Director of Lawyers for Civil Rights. Twitter: @IvanEspinozaESQ.

One response to “Racism: What Election Polls and Strategists Failed to Account For (OPINION)”