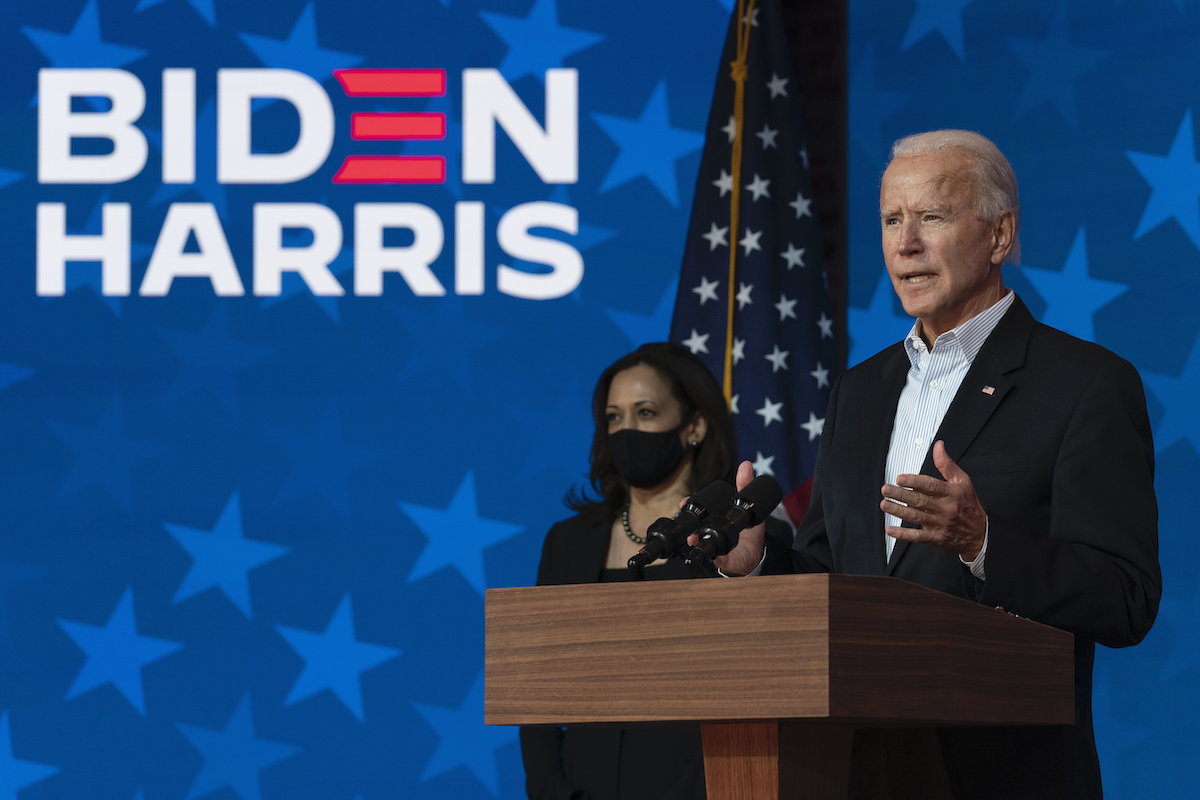 By JONATHAN LEMIRE, ZEKE MILLER and WILL WEISSERT Associated Press

WASHINGTON (AP) — President Donald Trump is testing how far he can go in using the trappings of presidential power to undermine confidence in this week’s election against Joe Biden, as the Democrat gained ground in tight contests in key battleground states, and then inched ahead in Georgia.

With his pathway to reelection appearing to shrink, Trump on Thursday advanced unsupported accusations of voter fraud to falsely argue that his rival was trying to seize power. It amounted to an extraordinary effort by a sitting American president to sow doubt about the democratic process.

The Republican president’s remarks deepened a sense of anxiety in the U.S. as Americans enter their third full day after the election without knowing who would serve as president for the next four years. His statements also prompted a rebuke from some fellow Republicans, particularly those looking to steer the party in a different direction in a post-Trump era.

Neither candidate has reached the 270 Electoral College votes needed to win the White House. But Biden eclipsed Trump in Wisconsin and Michigan, two crucial Midwestern battleground states, overtook the president in Georgia early Friday and was inching closer to doing the same in Pennsylvania, where votes were still be counted. 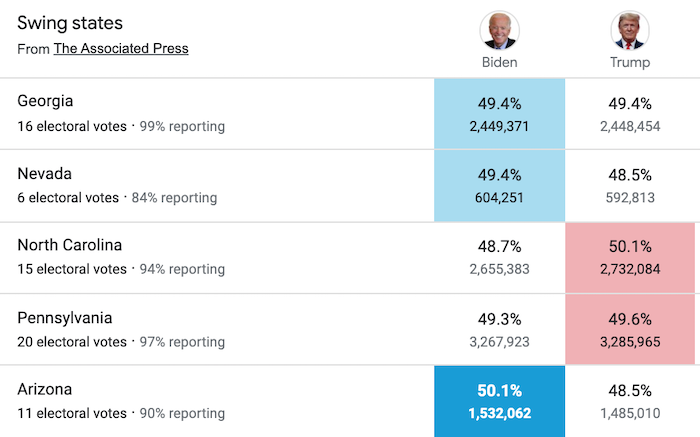 Results of five swing states via the Associated Press as of 8:20 am ET

It was unclear when a national winner would be determined after a long, bitter campaign dominated by the coronavirus and its effects on Americans and the national economy. The U.S. on Wednesday set another record for daily confirmed cases as several states posted all-time highs. The pandemic has killed more than 233,000 people in the United States.

Biden spent Thursday trying to ease tensions and project a more traditional image of presidential leadership. After participating in a coronavirus briefing, he declared that “each ballot must be counted.”

“I ask everyone to stay calm. The process is working,” Biden said. “It is the will of the voters. No one, not anyone else who chooses the president of the United States of America.”

Biden’s victories in the upper Midwest put him in a strong position, but Trump showed no sign of giving up. He was back on Twitter around 2:30 a.m. Friday, insisting the “U.S. Supreme Court should decide!”

It could take several more days for the vote count to conclude and a clear winner to emerge. With millions of ballots yet to be tabulated, Biden already had received more than 73 million votes, the most in history.

Trump’s erroneous claims about the integrity of the election challenged Republicans now faced with the choice of whether to break with a president who, though his grip on his office grew tenuous, commanded sky-high approval ratings from rank-and-file members of the GOP. 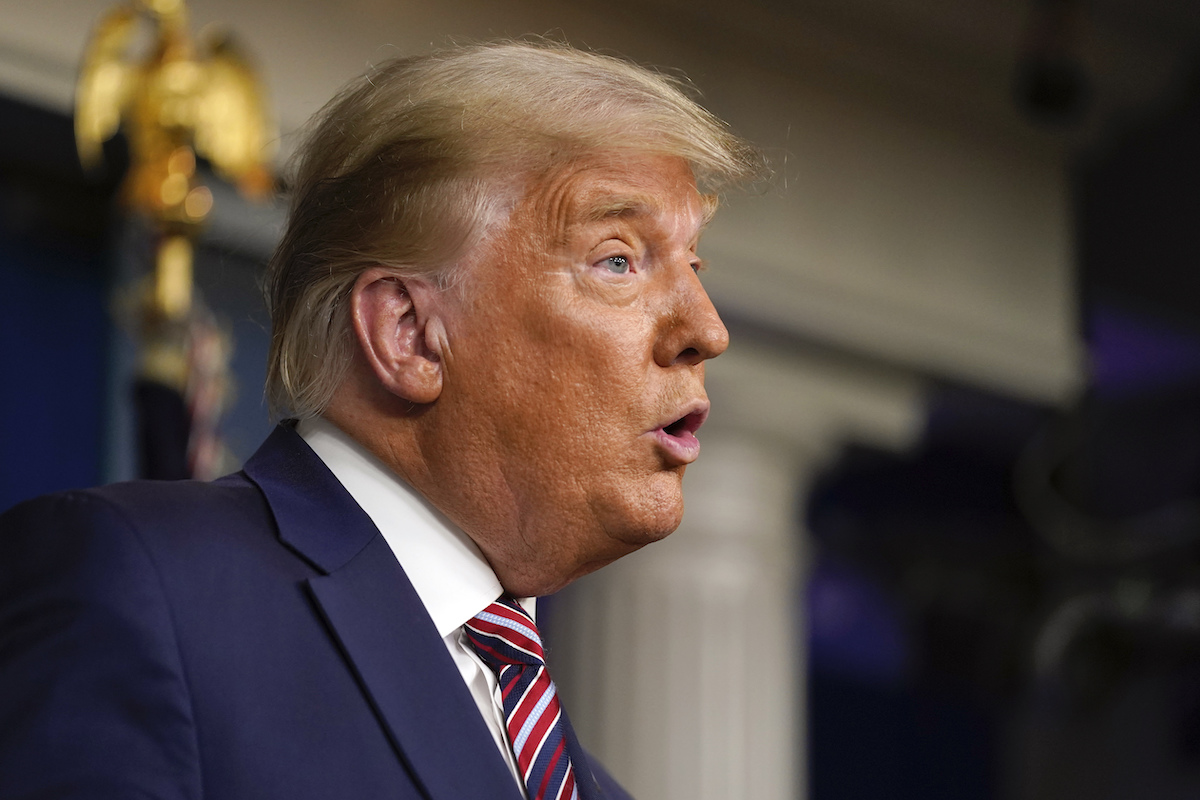 Maryland GOP Gov. Larry Hogan, a potential 2024 presidential hopeful who has often criticized Trump, said unequivocally: “There is no defense for the President’s comments tonight undermining our Democratic process. America is counting the votes, and we must respect the results as we always have before.”

But others who are rumored to be considering a White House run of their own in four years aligned themselves with the incumbent, including Sen. Josh Hawley, R-Mo., who tweeted support for Trump’s claims, writing that “If last 24 hours have made anything clear, it’s that we need new election integrity laws NOW.”

Trump’s campaign engaged in a flurry of legal activity to try to improve the Republican president’s chances, saying it would seek a recount in Wisconsin and filing lawsuits in Pennsylvania, Michigan and Georgia.

Judges in Georgia and Michigan quickly dismissed Trump campaign lawsuits there on Thursday, when Trump still held a small edge in Georgia —though Biden was gaining on him as votes continued to be counted. The same was true in Pennsylvania, where Trump’s lead had slipped to about 18,000 votes— and the race is destined to get tighter.

One reason is that elections officials were not allowed to process mail-in ballots until Election Day under state law. It’s a form of voting that has skewed heavily in Biden’s favor after Trump spent months claiming without proof that voting by mail would lead to widespread voter fraud.

Mail ballots from across the state were overwhelmingly breaking in Biden’s direction. A final vote total may not be clear for days because the use of mail-in ballots, which take more time to process, has surged as a result of the coronavirus pandemic.

The Trump campaign said it was confident the president would ultimately pull out a victory in Arizona, where votes were also still being counted, including in Maricopa County, the state’s most populous area. The AP has declared Biden the winner in Arizona and said Thursday that it was monitoring the vote count as it proceeded. 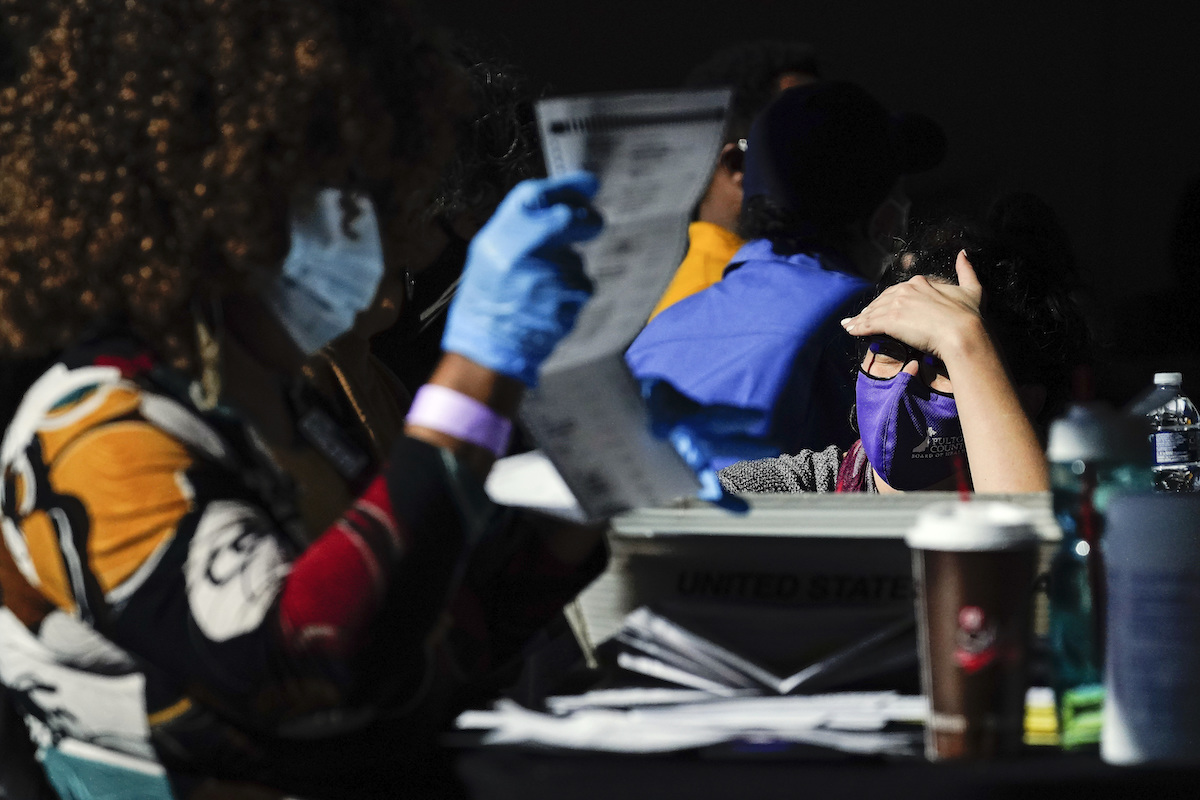 A election supervisor answer questions for the election workers as they count ballots at State Farm Arena on Thursday, November 5, 2020, in Atlanta. (AP Photo/Brynn Anderson)

“The Associated Press continues to watch and analyze vote count results from Arizona as they come in,” said Sally Buzbee, AP’s executive editor. “We will follow the facts in all cases.”

Trump’s campaign was lodging legal challenges in several states, though he faced long odds. He would have to win multiple suits in multiple states in order to stop vote counts, since more than one state was undeclared.

Some of the Trump team’s lawsuits only demand better access for campaign observers to locations where ballots are being processed and counted. A judge in Georgia dismissed the campaign’s suit there less than 12 hours after it was filed. And a Michigan judge dismissed a Trump lawsuit over whether enough GOP challengers had access to handling of absentee ballots

Biden attorney Bob Bauer said the suits were legally “meritless.” Their only purpose, he said “is to create an opportunity for them to message falsely about what’s taking place in the electoral process.”