To Court Latinos, Democrats Have to Expand Strategy in 2022 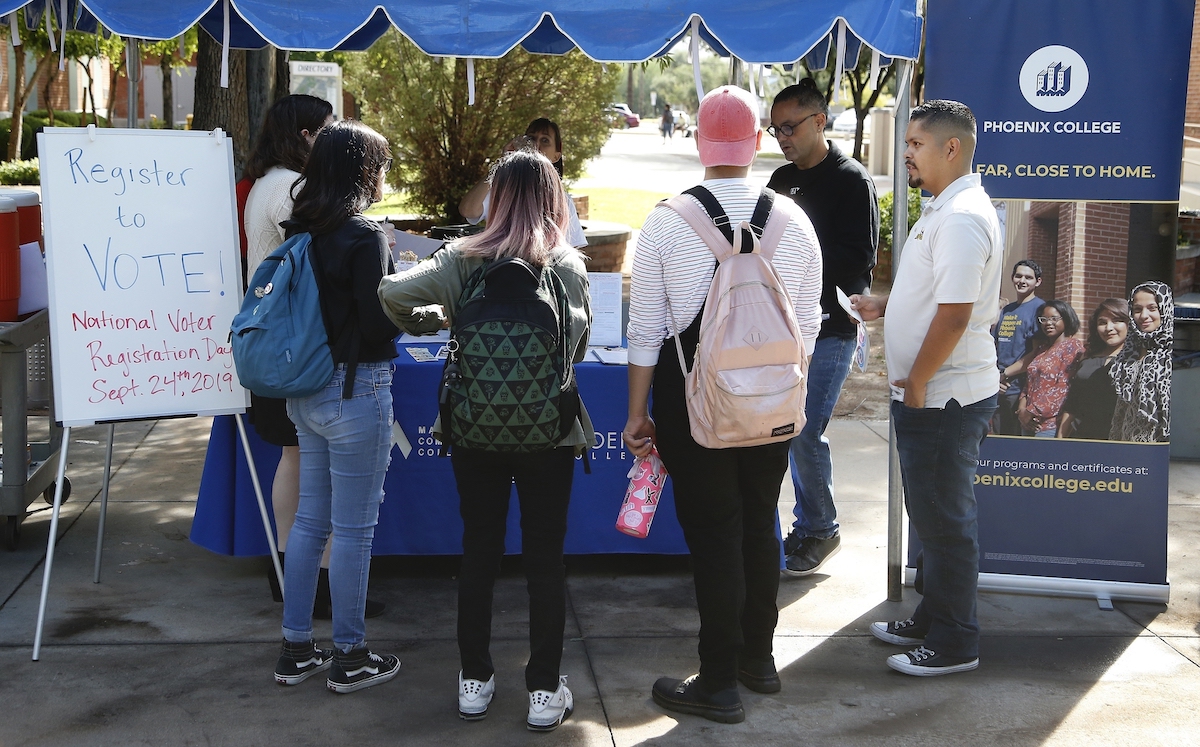 In this Sept. 24, 2019 file photo students at Phoenix College gather to fill out voter registration forms on National Voter Registration Day on campus, in Phoenix. Immigrant-rights and grassroots organizations that have been mobilizing Latinos in Arizona for nearly two decades helped propel Joe Biden to victory in a traditionally conservative state. (AP Photo/Ross D. Franklin,File)

PHOENIX (AP) — President-elect Joe Biden’s campaign credits its success in Arizona to the immigrant-rights and grassroots organizations that have been mobilizing Latinos for nearly two decades. The fruits of their labor —in triple-digit heat, no less— paid off in this traditionally conservative state, where changing demographics and suburban voters turning out to oppose President Donald Trump also worked in Biden’s favor.

But what that means for the future of Democratic candidates and how the party can capitalize on these gains will be tested in 2022 and 2024—especially because there wasn’t a blue shift in statewide races or in some other parts of the country with large Latino populations.

A coalition of longstanding grassroots organizations known as Mi AZ started knocking on doors in July, eventually hitting 1.1 million homes, even in the hottest summer on record in Phoenix. They made nearly 8 million phone calls and managed digital and broadcast campaigns.

Their work is nothing new. In 2016, groups involved with Mi AZ helped get a minimum wage increase passed and then-Sheriff Joe Arpaio, who had long targeted immigrants, voted out of office.

Driven by years of anti-immigrant propositions and legislation —from banning bilingual education 20 years ago, forcing college students without legal status to pay out-of-state tuition in 2006 to SB 1070, the infamous “show me your papers” law from 2010— these groups have built a network of activists and voters who turned out in huge numbers.

Latinos also now account for 24% of eligible voters in Arizona, compared with 19% in 2012, according to Pew Research Center.

Biden’s victory and that of Mark Kelly, who unseated Republican Sen. Martha McSally, are notable gains for Democrats. Biden is only the second Democratic presidential candidate to win Arizona since 1948. Kelly’s win gives the state two Democratic senators for the first time in nearly 70 years. 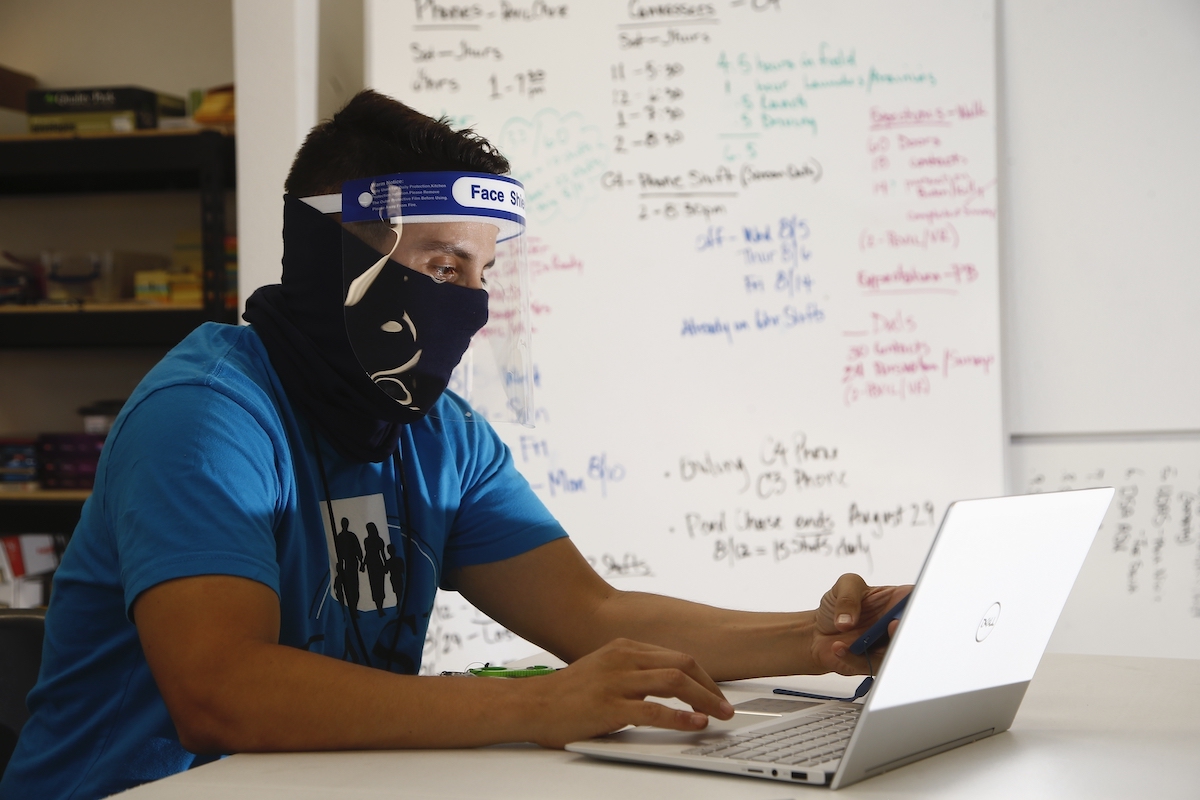 In this Aug. 6, 2020 file photo, wearing a face covering and face shield while working amid the coronavirus, Maico Olivares, lead voter registration organizer for Central Arizonans for a Sustainable Economy, works his phone and computer as he tries to reach about 25 people a day, mostly within the Latino community, to persuade them to register to vote, in Phoenix. (AP Photo/Ross D. Franklin,File)

But a slew of Democrats who ran for the state Legislature and statewide races failed to gain enough traction. Biden also owes his victory to changing suburban demographics, with Republican areas shifting Democratic, and to Native Americans.

In parts of the country where Democrats have long reigned, more Latinos voted for Trump this year than expected, including areas of Florida and Texas. Although Latinos likely helped propel Biden to the presidency, it was a lesson in the limits of the party’s grip on an increasingly diverse segment of voters.

And how or whether Democrats can keep that enthusiasm in the 2022 midterm elections will require a lot of work.

Chuck Rocha, a senior Democratic strategist, said the work by grassroots groups in Arizona helped Biden win. But it’s also incumbent on campaigns to prioritize Latino voters by spending time and money in their communities consistently, not just right before an election.

Super PACs that target Latino voters are also crucial, Rocha said, adding that his, Nuestro PAC, spent $4 million in ads in Arizona starting the last week of June, but that such spending is rare.

“I think Arizona is an example of the way to do things right, and it’s more than just the grassroots groups,” Rocha said.

He said Democrats will have to deploy similar tactics in other Hispanic-heavy areas of the country if they want to succeed in 2022, especially after losing several congressional seats in areas with a significant percentage of voters of color.

“If you’re relying on a bunch of white consultants to Google-Translate you an ad and put it on Univision, that’s not a winning strategy,” Rocha said.

They have to hire people who come from and reflect their communities and stop treating them as a safe bet, Arellano said.

“The parties know what they need to do, they’re just not doing it. They have outdated strategies,” he said. “The Latino electorate is incredibly young. In order to connect with them, they need to modernize civic engagement, and that requires an investment… What we’ve seen is that Latinos are an afterthought.”

The Biden administration will keep supporters by focusing not just on immigration reform and reinstating the Obama-era program that shields from deportation immigrants who were brought to the U.S. as children, but by tackling the coronavirus crisis and its economic fallout, said Julie Rodríguez, Biden’s deputy campaign manager who was recently named director of the White House Office of Intergovernmental Affairs.

“I think folks are gonna see a material difference between how we’re prioritizing communities and small businesses and addressing the day-to-day issues, whether it’s extending benefits or continuing to provide rent support,” Rodríguez said. “And that’s something this administration hasn’t done.” 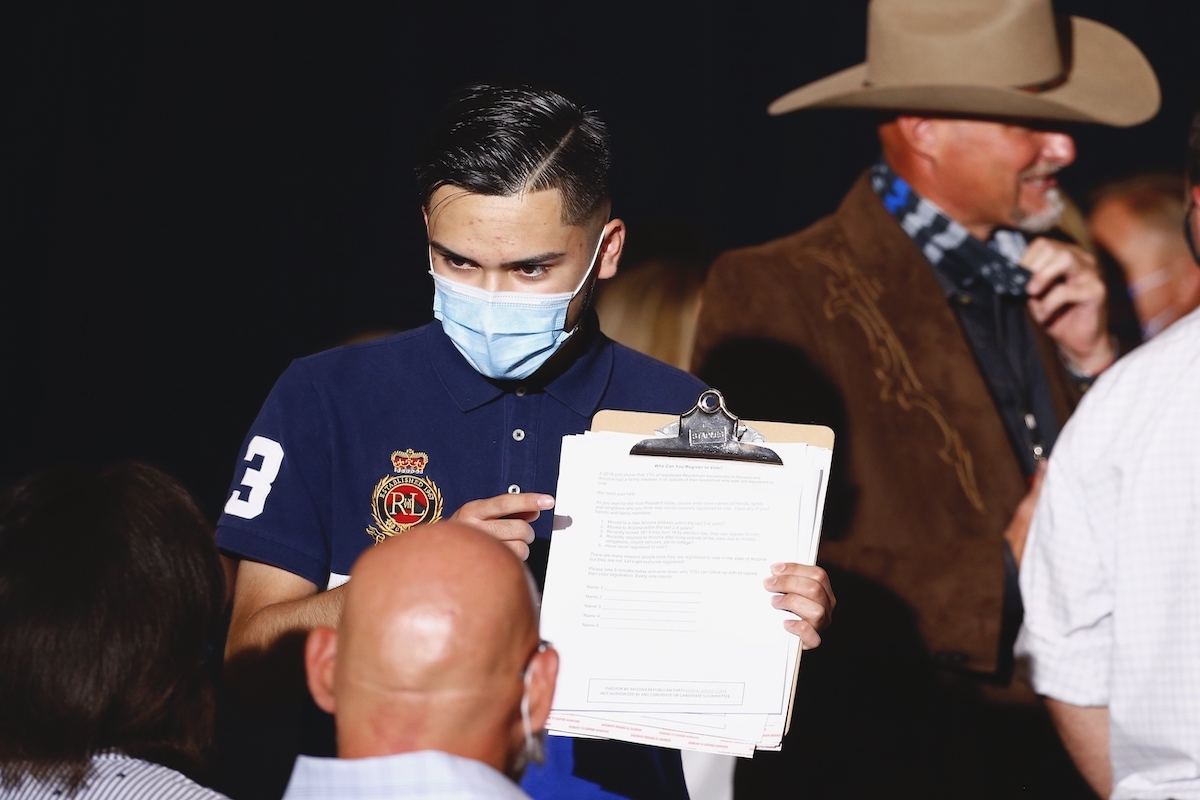 In this Aug. 11, 2020 file photo, volunteers canvass the crowd to get people to register to vote prior to an event with Vice President Mike Pence at the “Latter-Day Saints for Trump” Coalition launch event in Mesa, Ariz. (AP Photo/Ross D. Franklin,File)

To sway Latino voters, she said Democrats need to take the tactics used in Arizona to other states.

But the party will face stiff competition. Republicans attracted Latinos in parts of south Texas, and they will try to replicate that success elsewhere.

T.J. Shope, a longtime Republican state lawmaker newly elected to the Arizona Senate, said his party will look to its success in Texas for the midterm elections. Shope, who is Hispanic, says the Trump campaign had a significant Latino voter outreach effort, making inroads for the party in the future.

Shope, 35, says Republicans need to recruit more candidates who reflect their communities. He says it’s contingent on his party to ensure Arizona doesn’t turn into a reliably blue state.

“This is serious. We want to be competitive, we don’t want to be Colorado,” Shope said.

In Arizona, Democrats presented Trump as the boogeyman, getting voters to show up, while in south Florida, Republicans used socialism to drive voters to Trump, Shope said.

Trump won’t be on the ballot in 2022, when the reigning party usually loses seats.

“I guess the question I’m asking myself is, who does the boogeyman become for both parties?” Shope said.