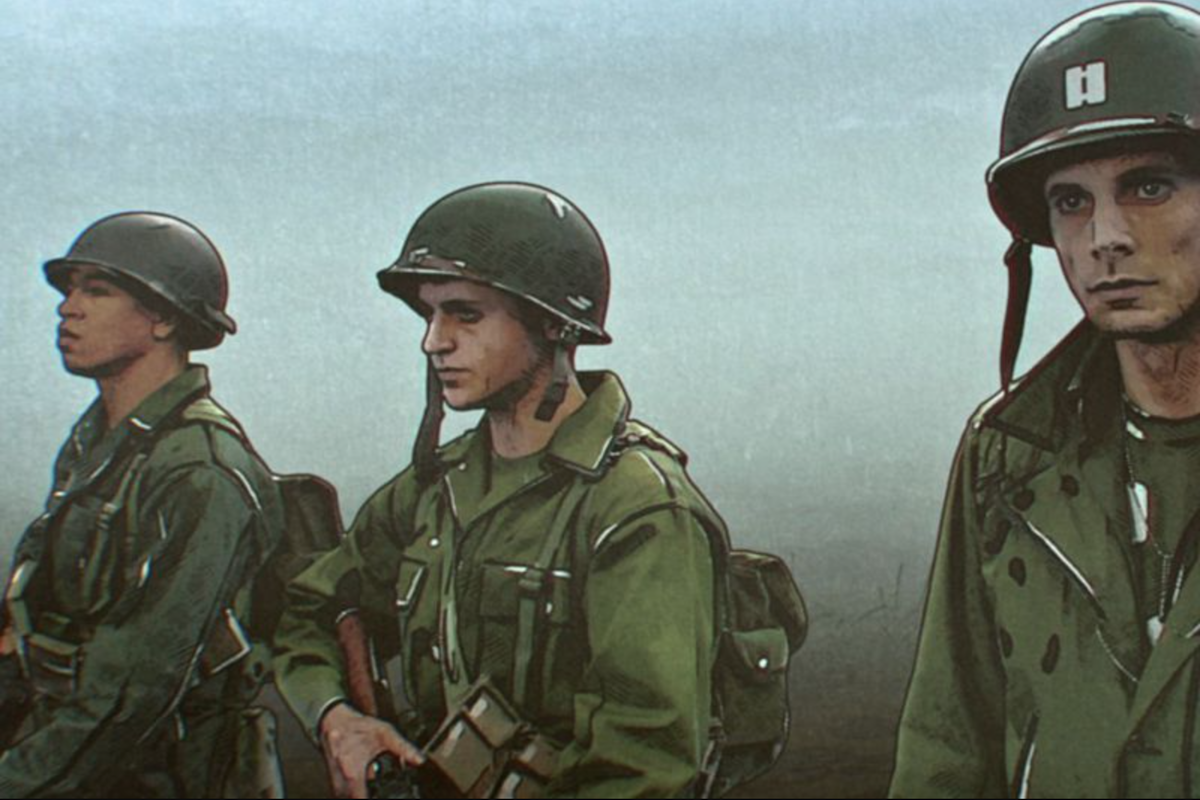 Netflix’s new show The Liberator is yet another chapter in a larger attempt to make World War II the new multicultural founding myth of the nation. The show follows the 157th Infantry Regiment in its battles from Italy through Germany. It is a story of the disaffected and discarded of the American West —Native Americans, Mexican Americans, poor white cowboys and farmers— who bring the character of the forging frontier to the frontlines. It is supposed to be a new story, one with a diverse cast of characters, to remind the nation of a past of shared sacrifice in a contemporary age of selfishness.

It is no surprise that the backdrop of World War II is once again used as a more palatable narrative device of a more diverse nation. Namely, because it is not a story that needs to be rewritten. It traffics in established tropes, aided by John Wayne, Steven Spielberg, and even Clint Eastwood. “The Greatest Generation,” as Tom Brokaw has called them, answered the call. Men sacrificed themselves and the nation learned to sacrifice for each. In the war, according to shows like Band of Brothers and The Pacific, and films like Saving Private Ryan and The Miracle of St. Anna, men learned while in their foxholes that race, creed, or color meant nothing. The men and the nation learned that life and death depended on loyalty and bravery, which was something more than skin deep.

This is the main theme of The Liberator.

In the Age of Trump, the series goes out of its way to include Mexican Americans in its story. Mexican Americans are not recent arrivals; they stormed the beaches of Normandy and climbed the cliffs of Italy. They are not criminal and rapists, but are brave GIs decorated with Medals of Honor. White commanders let their Native American soldiers beat racist instructors at boot camp and defeat Nazis abroad. In one defining scene, Sargent Able Gomez dies surrounded by his racially diverse troop. He looks into their eyes as he takes his last breaths and says “estos son buen hombres.” To which his white Major replies, “tus hombres.”  There are no bad hombres here.

The Liberator is an attempt to make World War II the new multicultural founding myth of the nation. The addition of Mexican Americans and Native Americans to the cast of characters does little to change the story we’ve told about WWII—it just adds them to the casualties as a way to cement their belonging. Their lost lives are supposed to make the nation more concerned about them in the past and present.

In its retelling, World War II was the war that defined American character in the modern age and people of color were there too. The evil of Nazism and fascism needed to be defeated, and it was the U.S. that defeated them.

That is the romance of a fictive war, however. Nazis and Americans shared similar eugenicist ideas, and Nazis were impressed with the U.S. racial order. That racial order continued through the war and after. African Americans fought in segregated units. They were also subjected to menial tasks in the military like they were in the domestic economy.  Mexican Americans, African Americans, Native Americans and many others weren’t celebrated in the iconic celebrations that covered New York City in ticker tape. Some, like Felix Longoria, returned home in body bags to towns where they were denied funeral services for being Mexican.

But perhaps the most unconvincing aspect of the WWII fable is that Americans came together because of death and loss.

Over 291,000 Americans lost their lives during WWII. The nation now approaches 260,000 deaths from COVID-19 (a number that is certain to grow, with estimates nearing 450,000 by early 2021), which is disproportionately impacting Latino and African American communities.  It seems it is not the suffering and sacrifice that defines the nation, but its embrace of death.

The prolific Chicano author Rolando Hinojosa served in the Army in the Korean War, often considered a forgotten war. In his novel The Useless Servants —which while fiction was semi-biographical— Hinojosa and his character, Rafe Buenrostro, are sure that war is not the fictional romance most Americans believe it to be.

He writes: “Well, ‘the folks back home’ should see what 20 dead bodies look like. Then, they could work up to 50 and then 100 and then 200-300 with arms bent, legs off, and half bodies here and there, some guys slammed against tree trunks or parts of them hanging from branches. After this, we could take the taxpayers by the hand and walk them through the 420 [North Koreans] killed and wounded on hill 268. Make them see how their tax dollars are being spent.”

War shouldn’t be a tale that shows male bravery comes in all shades, but it seems that’s what it has become. WWII is now a war fought far away and long ago. Its carnage, its human toll, is cinematic to us. Instead of the horrors and suffering, it is an allegory of national bravery.  In this form, the dead can no longer speak and death no longer cautions us.

Aaron E. Sanchez is a Texas-based writer who focuses on issues of race, politics and popular culture. He is a happy husband, proud father and an avid runner. He blogs at CommentaryandCuentos.com. You can connect with him @1stworldchicano.