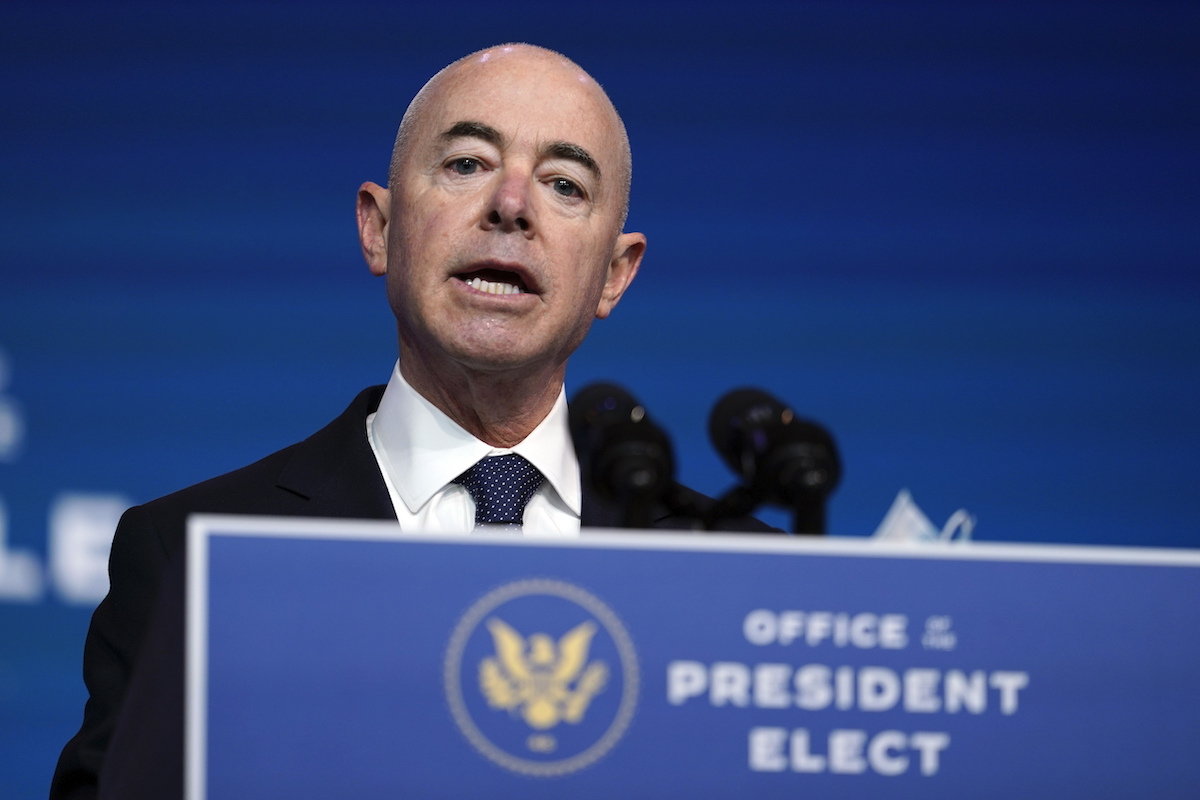 WASHINGTON (AP) — The last time Alejandro Mayorkas faced Senate confirmation, not a single Republican voted for him because there was an open investigation into his management of the U.S. immigration agency under President Barack Obama.

Now, seven years later, Mayorkas is President-elect Joe Biden’s groundbreaking nominee to lead the Department of Homeland Security, and that since-completed investigation has emerged as a potential stumbling block.

The Office of Inspector General’s 2015 report criticized his handling of three politically connected applications to a program that grants U.S. visas to foreigners who make job-creating investments in the United States. Mayorkas has disputed the findings, and he never faced any sanctions, but Republican senators are bringing it up ahead of what could be a tight confirmation vote.

It’s too soon to say whether the nomination of Mayorkas, who would be the first Latino and first immigrant to run DHS, is in jeopardy. But lawmakers such as Sen. Charles Grassley have expressed concern about the report, which concluded that Mayorkas created an appearance of favoritism and special access at Citizenship and Immigration Services when he was director from 2009 to 2013.

“That brand of leadership isn’t good for agency culture or the security of our nation,” the Iowa Republican told The Associated Press on Thursday.

It’s an important moment for Homeland Security. The third-largest Cabinet agency. DHS became closely identified with President Donald Trump’s political agenda, as it imposed new hurdles to restrict legal immigration, dispatched agents in tactical gear to protests over the summer without the consent of local authorities and employed controversial measures against illegal immigration, most notoriously the separation of children from their families at the southwest border as part of a zero-tolerance policy in 2018.

Under Biden, the Cuban-born Mayorkas is expected to direct a major reset of the agency’s priorities, which he signaled in recent remarks to the American Business Immigration Coalition.

“We must bring to an immediate end the inhumane and unjust treatment of immigrants,” he said. “There is no more powerful and heartbreaking example of that inhumanity than the separation of children from their parents.”

Supporters say Mayorkas’ experience, which includes serving as a federal prosecutor, is an asset not a liability.

“He is a man of great integrity and principle, with an incomparable work ethic, who understands the complexities of this critical agency and the threats facing our country at this crucial moment,” said Sen. Tom Carper, D-Del., who chaired the Homeland Security Committee when Mayorkas was named deputy DHS chief in 2013.

Mayorkas may yet get some Republican support, which Biden may need if the Democrats don’t win the two seats in the Georgia Senate runoff; Republicans only need to win one to maintain their control of the Senate.

John Rowe, a prominent GOP donor who co-chairs the business immigration coalition and favors a more welcoming attitude toward immigrants, said he planned to speak with several Republican senators to urge them to support Mayorkas.

“This is an easy vote,” said Rowe, the former CEO of Exelon Corp. “Some of the other immigration votes are not that easy for Republicans who have to go home to primaries. No one is going to lose their seat because they vote to confirm Mayorkas.”

A separate issue that could come up is his role in the 2001 pardon by President Bill Clinton of Carlos Vignali Jr., the son of a wealthy businessman and Democratic donor who was convicted of involvement in a cocaine trafficking ring. Mayorkas, then the U.S. attorney for Los Angeles, called the White House to ask about the status of the case at the request of the family. He explained later that the Justice Department had cleared the call but apologized for a “mistake.” The issue did not block his confirmation to lead CIS in 2009 in a unanimous Senate vote.

The Biden transition team views neither issue as an impediment to confirmation. “While we fully expected disagreement with some members of the Senate, we’re gratified by the overwhelmingly positive reaction and strong bipartisan acclaim that Alejandro has received,” spokesman Sean Savett said.

Still, there is almost certainly to be more parsing of the inspector general’s report, which was recently raised by Sen. Tom Cotton, R-Ark., in an appearance on “Fox & Friends.”

The report deals with three applications under what’s known as the EB-5 visa program, which was created in the 1990s under President George H.W. Bush to promote economic development. It enables foreign citizens to get U.S. residency for themselves, their spouses and minor children if they make an investment that creates at least 10 jobs.

Investments can be pooled to create what are known as regional centers, which were the subject of whistleblower complaints at the heart of the report.

The report said Mayorkas intervened in an administrative appeal for an investment in an application by Gulf Coast Funds, which was run by Hillary Rodham Clinton’s brother, Anthony Rodham, and whose board chairman was Democratic fundraiser and former Virginia Gov. Terry McAuliffe.

It said he expedited the review of a Nevada casino project at the urging of former Senate Democratic leader Harry Reid, and directed CIS personnel to provide Reid’s office with briefings on the status of the application.

Mayorkas also directed CIS to reverse the rejection of an application that would have funded Sony movie projects in the Los Angeles area after being contacted by former Democratic Pennsylvania Gov. Edward Rendell and others, the report said.

The report noted that all these actions were “legitimately within his purview” as director of CIS and said “we take no position on the wisdom of these actions,” only the appearance.

Mayorkas pushed back hard in an unusually detailed 33-page response to the report and in congressional testimony.

The EB-5 investor program had been the subject of complaints from Republicans and Democrats that long predated his tenure at CIS and he said he was working to address them, creating a new office to review the applications and ensure they met the economic requirements.

It was also not unusual for members of Congress to contact the agency about the EB-5 program. In fact, several prominent Republicans were in touch with Mayorkas on behalf of Gulf Coast Funds. He received many requests about other matters from both parties. As proof, he cited a letter from Grassley thanking him for his personal involvement helping a family from Iowa with an international adoption.

“I took a hands-on approach with the cases that warranted my personal involvement,” he said in his rebuttal.

The report also noted that some of the people interviewed in the investigation described Mayorkas as “aggressive,” with one saying that he would “cut them up, take them apart or put them in their place” if they disagreed with him. But Kenneth Palinkas, a senior official with the employee union at CIS, said he was widely liked by workers.

Mayorkas would invite him into his office and serve Cuban coffee as they discussed union issues, while previous directors wouldn’t meet with him at all, Palinkas said.

“It’s not a normal response that you get from a higher-up in management,” he said. “This guy was hands-on, that’s what I could tell you about Alejandro. Totally hands-on and totally congenial.”