Rising Latino Voters Could Be Force in Georgia Senate Races 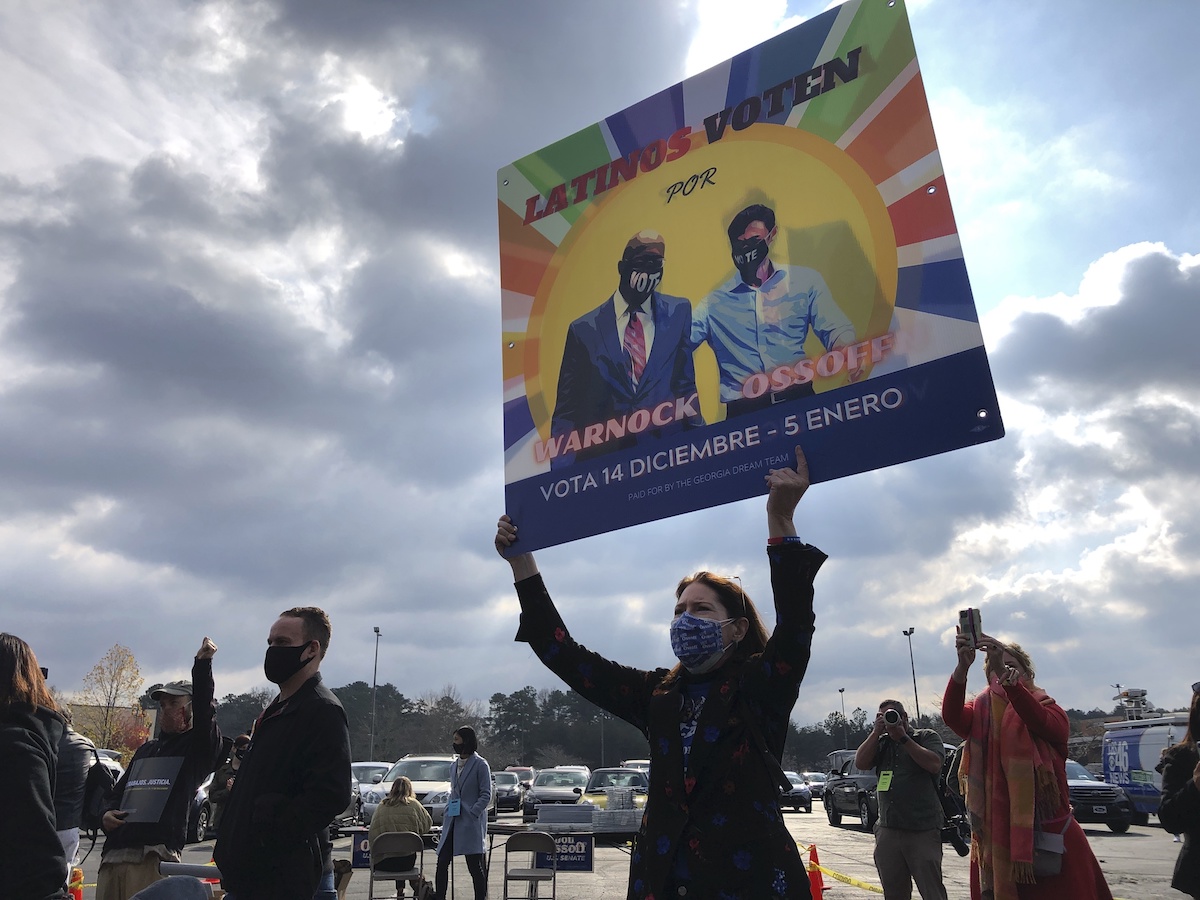 A supporter holds up a sign calling on Latinos to vote for Democrats Raphael Warnock and Jon Ossoff during a rally for Ossoff and former U.S. Secretary of Housing and Urban Development Julián Casto in Lilburn, Ga., Monday, December 7, 2020. (AP Photo/Jeff Amy)

LILBURN, Ga. (AP) — As Georgia heads into two key runoffs that will determine control of the U.S. Senate, Democrats are hoping to count on Latino voters who helped tilt the state blue in November.

But President Donald Trump rattled Democrats by winning larger-than-expected shares of Hispanic votes in parts of the country, raising questions about how much Democrats can rely on the nation’s largest minority group as a cornerstone of their coalition.

The January runoffs between Republican U.S. Sens. David Perdue and Kelly Loeffler and Democratic challengers Jon Ossoff and Raphael Warnock will be the next test of strength in a state with a growing Latino population of more than 1 million.

Democrats want to make sure Latinos turn out again, emphasizing immigration and COVID-19 relief in their campaigns. Republicans want to cut Democrats’ advantage in a youthful and rapidly growing community, reprising Trump’s emphasis on a strong economy for working people and spurning what they describe as Democrats’ embrace of socialism.

Increasing Latino interest and participation has been fed in part by an upswell of political organizing in Latino communities that has reached voters like Anayely Moreno, a Gainesville resident and the daughter of Mexican immigrants.

Moreno said the struggles of immigrants in her small city northeast of Atlanta, in a state where sentiment against illegal immigration has often been harsh, is the prime motivator driving her to the ballot box.

“We don’t notice all the ways it affects every aspect of our lives,” said Moreno, who volunteers with Georgia Familias Unidas, a group that offers COVID-19 assistance to families and encourages them to vote. “No matter what you’re doing, our lives are affected by policy.”

Moreno, at 24, is in the sweet spot for Georgia’s emerging Latino politics. It’s a young community, with the median age in the late 20s, according to census figures. Spanish speakers began arriving in large numbers in Georgia in the 1990s, drawn by the boom coinciding with the 1996 Atlanta Olympics.

More than a third of the community is younger than 18; about another third are adults in the country illegally, those who study the community say. Many of those who can vote are young adults, with about 20,000 Georgia Latinos turning 18 each year, according to census figures.

AP’s Votecast survey found that 3% of Georgia’s 5 million voters in November were Latino and 60% of them voted for Biden, versus 30% for Trump. Biden’s 36,000-vote margin among Latinos was more than double his overall winning margin in the state.

Turnout of Latino citizens old enough to vote in Georgia increased from 33% in 2016 to 42% this year, according to an analysis by Emory University professor Bernard Fraga and Catalist, a liberal-leaning group that does voter analysis. Jonathan Robinson, a lead research scientist with Catalist, said that turnout among Latinos increased more than turnout statewide, calling it a “good sign” for voting in the Senate runoffs.

Latinos weren’t solely responsible for the first Democratic presidential victory in Georgia since 1992. Also needed were a large number of Black voters, a chunk of white suburbanites who abandoned traditional Republican leanings and strong support from Asian voters. But Latino voters could be part of a coalition just big enough for Ossoff and Warnock to win.

“Georgia is no longer only Black and white. Georgia is multilingual and multiethnic,” said Gigi Pedraza, executive director of Georgia’s Latino Community Fund, which has helped mobilize Latino voters.

The change was on display last Monday in Lilburn, a suburb in sprawling Gwinnett County. Ossoff and former U.S. Secretary of Housing and Urban Development Julián Castro urged people to register and vote in a rally at Plaza Las Américas, a shopping center catering to Spanish speakers.

Biden romped in Gwinnett County as a Democratic tide swept in new officials, including a new sheriff who pledges to end a program that checks the status of arrested people and turns those here illegally over to Immigration and Customs Enforcement for deportation. 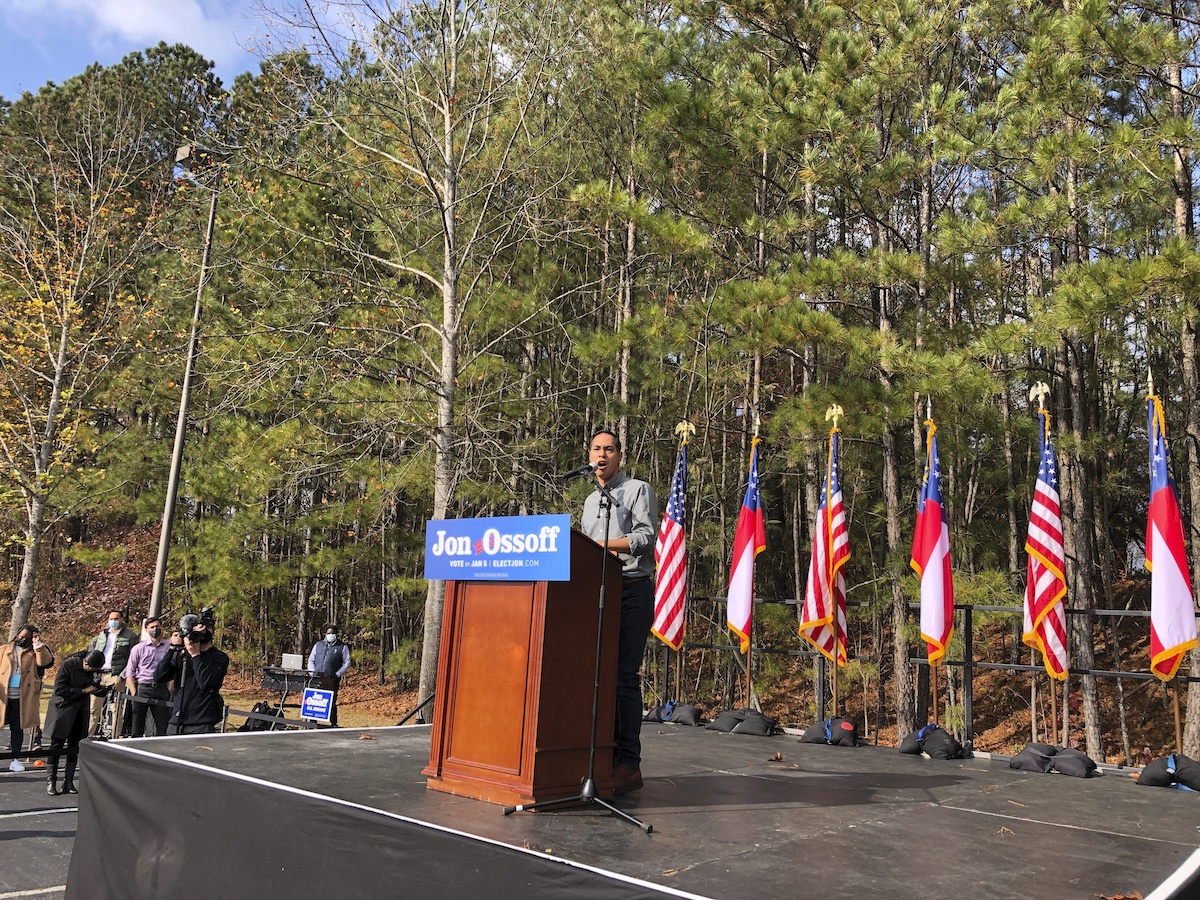 That’s just one example of policies adopted by Republican officials to crack down on immigrants in the country illegally. Jerry González, CEO of the Georgia Association of Latino Elected Officials, noted that current Republican Gov. Brian Kemp aired a television ad in 2018 saying he drove “a big truck in case I need to round up criminal illegals and take them home myself.”

“Georgia is a hostile state toward immigrants,” González said, indicating it’s hard for Republicans to break through to Latinos. “If you’re talking in that level of rhetoric, then Latinos really don’t have any interest in listening to anything else you’re talking about.”

Republicans aren’t giving up, though. Jason Anavitarte was a national Latino adviser to Trump this year and won a state Senate seat northwest of Atlanta as a Republican. He said Trump’s increasing share of the Latino vote nationally and in Georgia was not a “blip on the radar” but indicated that Trump’s economic message appealed to the community.

The COVID-19 response is a key issue among Latinos, said María del Rosario Palacios, who founded Georgia Familias Unidas to give personal protective equipment to workers at chicken plants and elsewhere who can’t work from home.

Palacios said she sees a lot of confusion over the additional election, a requirement Georgia imposes that can be baffling to inexperienced voters.

“Folks don’t really understand there is a runoff,” Palacios said. “They say ‘No, no, no, I voted in November. I’m good.’”

Moreno shares that fear but said she’s surprised by the level of engagement she sees and believes the election could be a chance for Latino political power to advance.

“I understand when some people feel like voting won’t make a difference,” Moreno said. “It’s small steps that get us somewhere. More people came out to vote in November and that made a huge difference.”