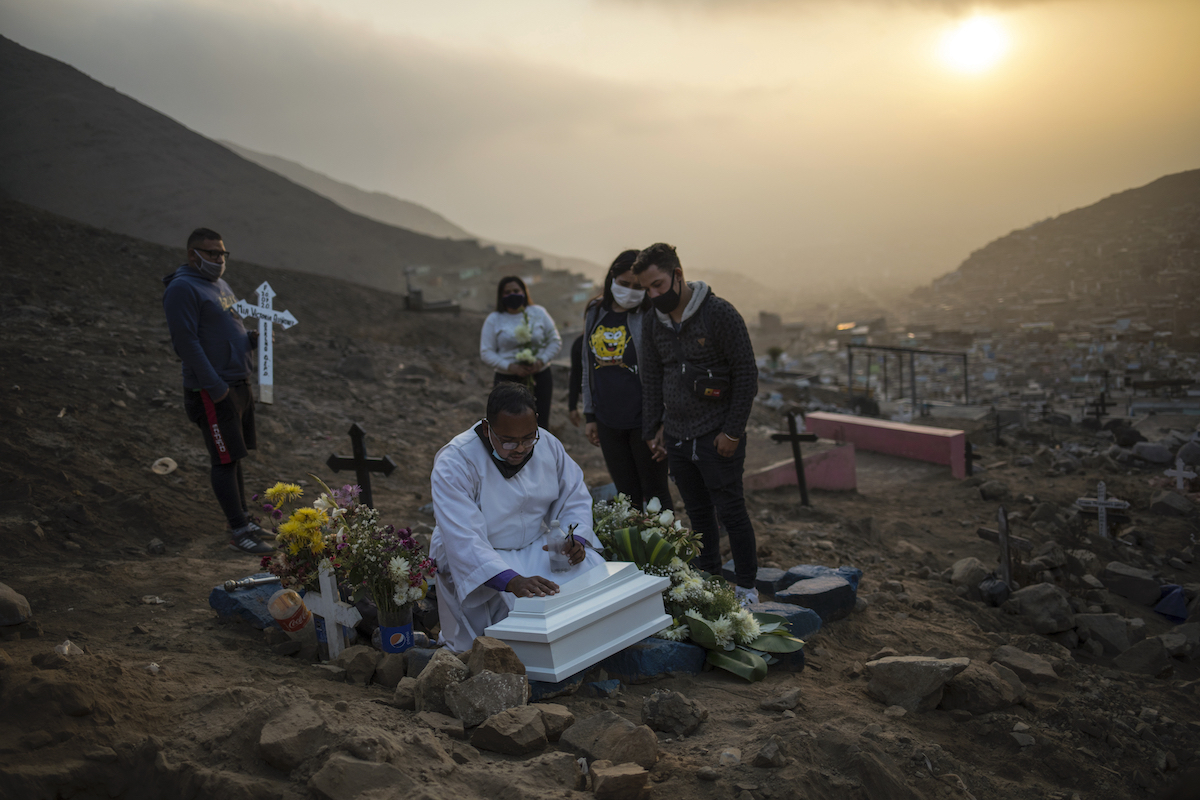 Brother Ronald Marín, a 30-year-old layworker from Venezuela, prays over the coffin that contains the remains of Keizer Quinones and Sarai Araujo’s unborn daughter, at a burial service in the “Martires 19 de Julio” cemetery in Comas, on the outskirts of Lima, Peru, Tuesday, July 21, 2020. (AP Photo/Rodrigo Abd)

Each day at the height of the pandemic in Peru, Ronald Marín visited a crowded, dusty cemetery to offer final prayers for dozens of victims of COVID-19, their coffins wrapped in plastic like suitcases preparing for a flight.

Many had died before a priest could deliver last rites. Relatives asked if their loved ones had perished in sin. The young Venezuelan migrant lay worker tried to offer some solace, telling them that ultimately, God is merciful.

The magnitude of loss in this South American nation that for months held the grim title of first worldwide in per capita COVID-19 deaths is striking. A recent poll found that seven in 10 Peruvians know someone who died from the virus. Many know far more than just one. Marín estimates he knows at least 50.

“On every block, there is someone who has died,” he says.

The story of Peru did not have to be this way. Decades of under-investment in public health and poor decisions at the onset of the pandemic, coupled with severe inequality and shortages of life-saving goods like medicinal oxygen, combined to create one of the world’s deadliest outbreaks. 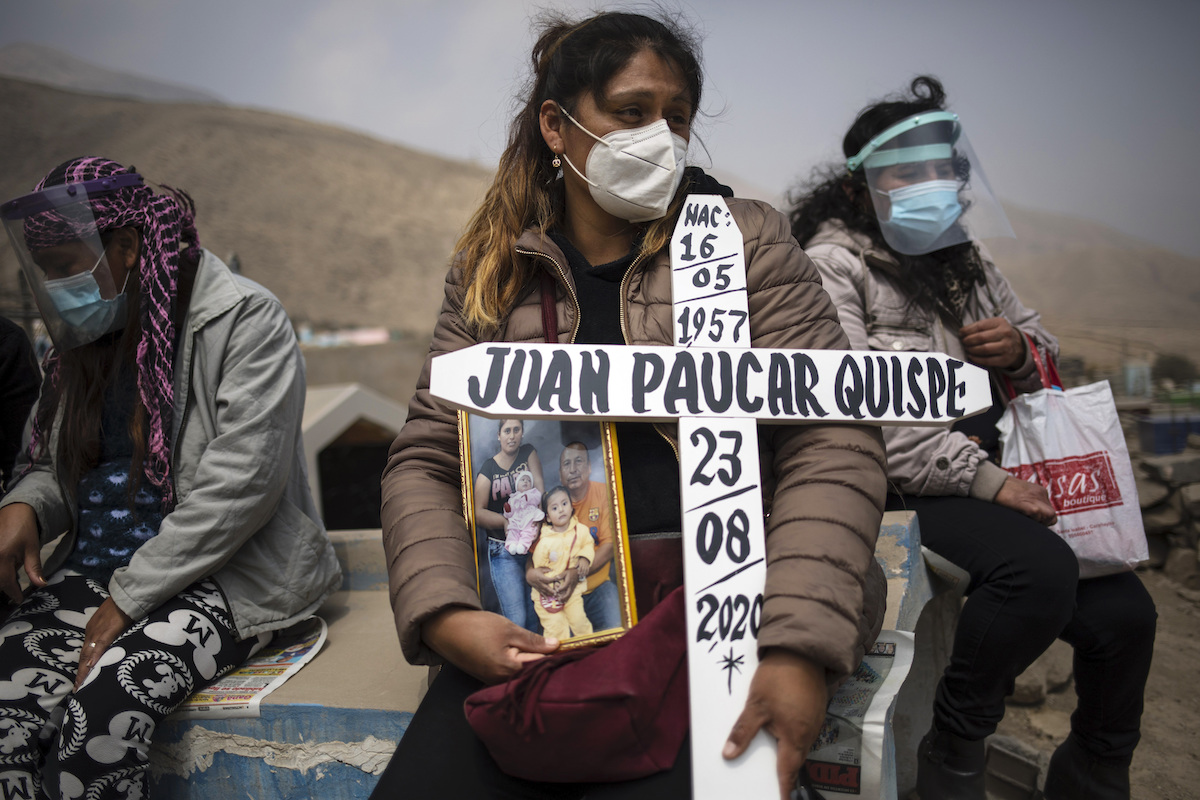 Ruth Morales, 36, center, waits for the arrival of the coffin of her husband, Juan Paucar Quispe, 63, who died from COVID-19 complications, during his burial at a cemetery in Carabayllo, Lima, Peru, Tuesday, Aug. 25, 2020. (AP Photo/Rodrigo Abd)

Peruvian officials have called the pandemic the most devastating public health crisis to hit the country since 1492, when Europeans brought diseases like smallpox and measles to the Americas, devastating indigenous populations.

“We are seeing a lot of grief,” psychologist Catalina Gastiaburú said. “Grief for physical losses, like that of a person, but also other types, too.”

In early March, Peru’s confirmed its first coronavirus case—a LATAM Airlines worker who had returned from vacation in Europe. Many Latin American nations identified initial outbreaks among wealthier citizens returning from trips abroad. But from one city to the next, the virus quickly spread to low-income, densely packed neighborhoods.

In Lima, some of the hardest-hit areas are home to street workers; 70% of the nation’s workforce does not have formal employment. Though Peru instituted one of the region’s earliest and strictest quarantines, many could not afford to stay at home for long. So candy vendors, fruit sellers and florists got on the bus and went to work.

By June, hospital wards were filling up to capacity. Throughout the country, medicinal oxygen —a vital tool in treating COVID-19 patients— became scarce. Doctors relied on millions of cheap antibody tests the government had purchased to diagnose cases, even though they cannot detect early infections. The result was confusion, delays in treatment and a death toll that official admit is probably a vast undercount.

Infected pregnant women —including some who had lost husbands to the virus— were forced to deliver their children in isolated hospital wards, alone except for a doctor. Cremation replaced centuries-old burial traditions for most who died from the virus. Hundreds if not thousands died at home, unable or unwilling to get to a hospital. Venezuelan migrants who had arrived here in droves in recent years were among those who assumed the wrenching task of retrieving and cleaning the bodies of the dead.

Many of the dead were too poor for a proper burial. Some were migrants themselves. So remains were delivered back home in small buses, in wooden boxes carefully strapped into seats like passengers.

Archbishop Carlos Castillo filled the pews of Lima’s cathedral with 5,000 pictures of police officers, firemen, street sweepers and others killed by COVID-19. 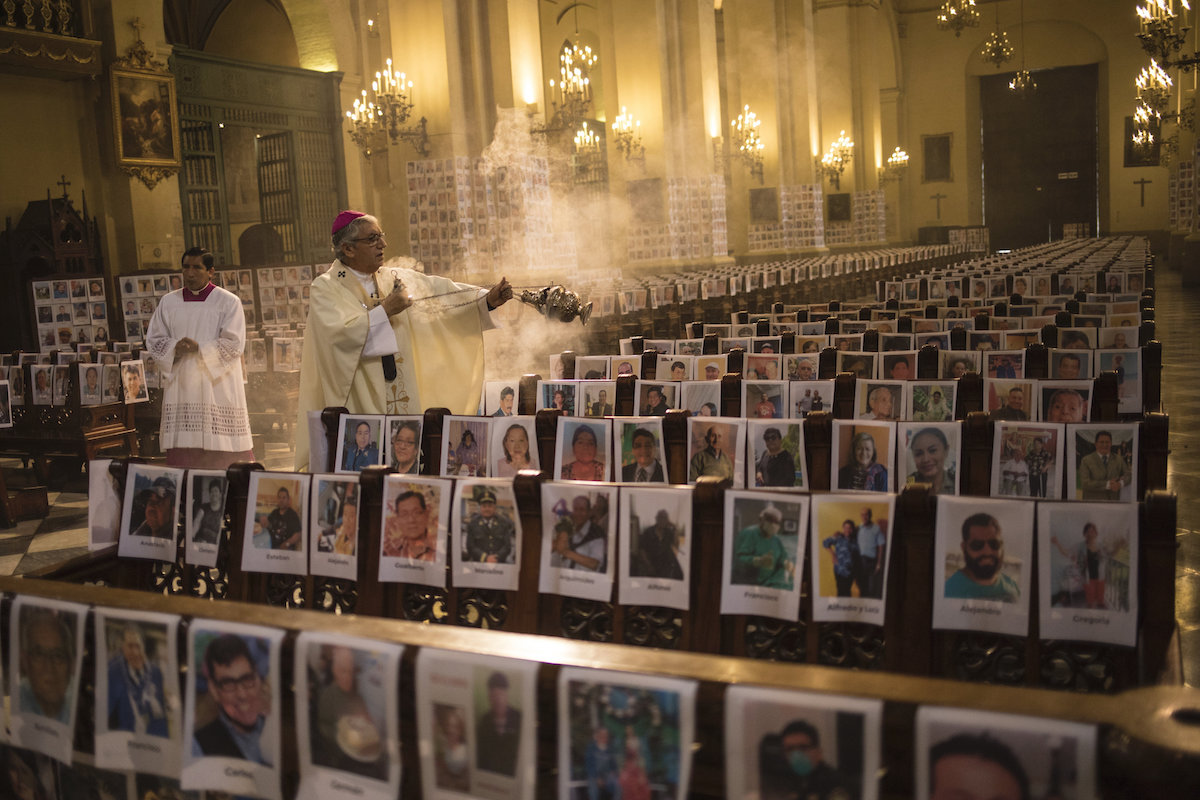 The Archbishop of Lima Carlos Castillo swings a censer over several of the more than 5,000 portraits of COVID-19 victims during the Corpus Christi Mass at the Cathedral of Lima, Peru, Sunday, June 14, 2020. (AP Photo/Rodrigo Abd)

The virus provoked not just a health crisis but an economic one, too. The International Monetary Fund projects Peru’s GDP will decline by almost 14% this year, one of the worst economic contractions anywhere. Once sought-after tourist destinations like Machu Picchu and nearby Cuzco turned into ghost towns.

With that economic loss came the loss of dreams. Students who had imagined a bright future as architects, doctors and business leaders were forced to give up their studies, compelled to find jobs to help their families earn money in order to eat. Restaurants, clubs and stores shuttered.

And then there is Marín, who is still splashing holy water over the deceased and praying with those they’ve left behind. When the loved ones of the dead seek his counsel, he does not promise any quick relief. He tells them mourning is a perpetual thing.

“If you love someone, you’ll miss them all your life,” he says.