The Most Diverse Oppressors Ever (OPINION) 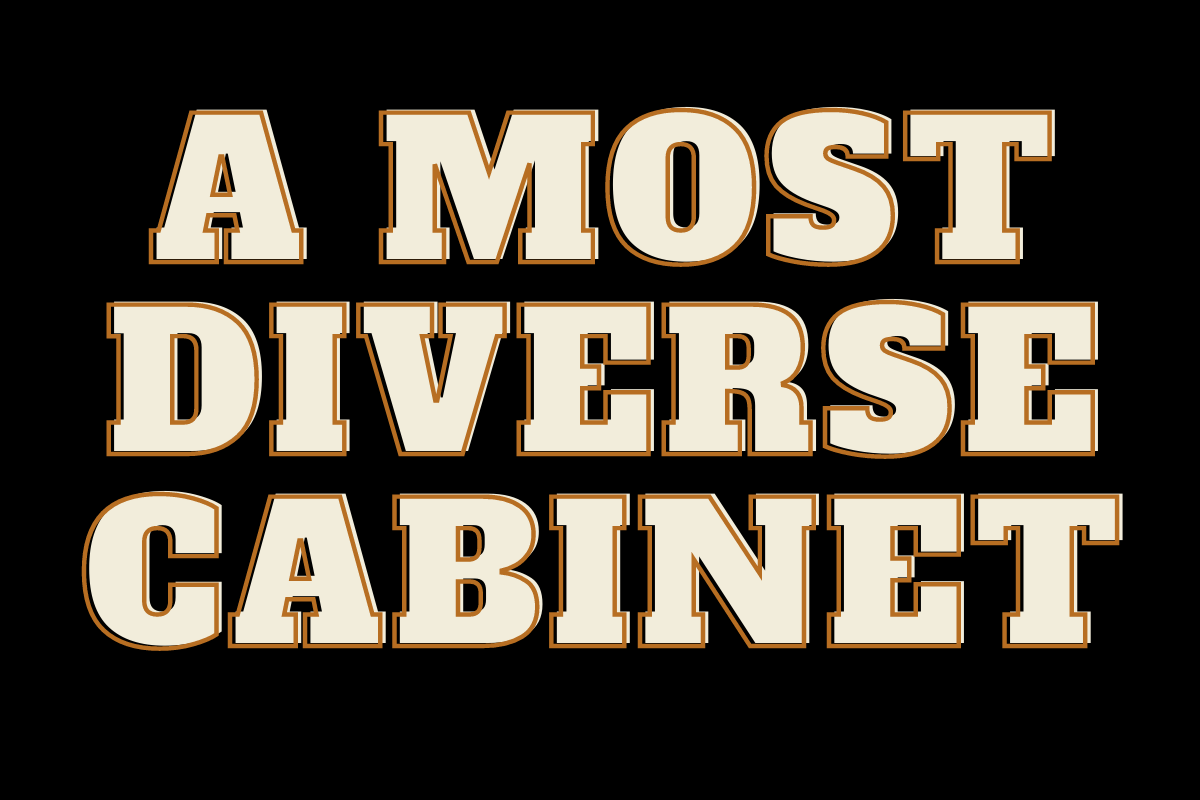 LAS VEGAS — As kids we’re told never to judge a book by its cover. But then we grow up and enter a world where judging books by their covers is all anybody does. At least twice a year a book will pop up on the New York Times Best Seller list based solely on its eye-catching design, or its finger-snapping title, or the fact that its author belongs to a historically marginalized group now in vogue. The faux-literati speak glowingly about the book, but rarely is a word spoken of what’s actually in it. Most people buy the book just to post a photo of it on social media —along with a cup of green or black tea and cute decor, some lilies near a window— to let their followers know how hip they are. And once posted, they might flick through a few pages before placing the book on a shelf, in a prominent location, for visitors and people on Zoom to spot.

As with books, so too with politics. It’s to be expected, I guess, since most of us have lost all sense of how to judge things properly, due to the increasing rush of the modern world leaving us little time to consider substance, merely appearances. Plus social media has trained us to quickly identify only what is popular, rather than what is good or right. With the way things stand, given a choice between a Black female candidate and a white male candidate, most people on the left would reflexively, in a Pavlovian way, cast their ballots for the Black woman—and it’s safe to suppose that most people on the right would plump for the white guy. The selection process might get messy if the white man were a gay Democrat and the Black woman appeared on the ballot with an R next to her name.

We judge people by their covers, too. The layers of labels. And certain labels trump others.

Most people on the left, and even a few on the right, are understandably geeked to witness the inauguration of the first woman of color to become vice president; it represents yet another milestone in American history, coming after the first woman to win a major party’s presidential nomination in 2016, and the first Black man to sit in the president’s chair. Many people see Vice President-elect Kamala Harris as America coming one step closer to being the cosmopolitan meritocracy we were all told it is back in third-grade social studies.

Yet, what is all this diversity and inclusion in government worth? Those familiar with Biden’s long career in the Senate can’t expect the policies of a Biden administration to depart much from the neoliberal-neoconservative regime that has reigned since the dazzling days of disco. After all, Biden was and remains one of the pillars of that regime. The Senate is arguably the most reactionary institution in American government —though the Electoral College and the Republican-dominated Supreme Court aren’t far behind— and Biden is one of its old lions, having served in it since he was 30, from 1973 to 2009, when he became vice president.

Biden chaired the Senate Judiciary Committee during Clarence Thomas’s confirmation hearing in 1991, when the committee tried to sweep Anita Hill’s sexual harassment charges against Thomas under the rug. (Thomas has been the token Black justice on the Supreme Court since Papa Bush was in office, and much good that’s done Black people, people of color in general, or anyone except the Waspy elite.) Biden was chair of the Senate Foreign Relations Committee on September 11, 2001, and was one of our leaders beating the drum against Saddam Hussein, ultimately voting for the invasion of Iraq.

As a young senator in the seventies, Biden palled around with segregationists like South Carolina Sen. Strom Thurmond and Mississippi Sen. James Eastland, calling Thurmond “one of my closest friends” and joking in 2019 that Eastland “never called me ‘boy.'”

Biden made his first bid for the White House in 1987, but was forced to drop out early after he was caught lifting whole passages from other people’s speeches and lying about his college achievements and his own participation in the Civil Rights movement. He wrote the 1994 Clinton Crime Bill, also known as the Biden Crime Law, which fueled the mass incarceration we’ve seen in the last decades, affecting Black and Latino men at a disproportionate rate. (He had sponsored the Biden-Thurmond Violent Crime Control Act of 1991, but it died in the House.) In 2005 he championed a new bankruptcy law that gives more power to banks and credit card companies by making it harder for consumers to escape debt, a condition which helped trigger the financial crisis three years later and tightened the screws on tens of millions of Americans. (As a side note, Delaware is a very corporate-friendly state notorious for being a domestic tax haven.)

After decades of working for the banks, the carceral state, and the military-industrial complex, should we expect Biden, once he assumes the bully pulpit of the presidency, to abandon every policy he’s supported, every outcome he’s worked toward, every prop in the system he helped in install—all because he has a diverse cabinet?

Socialists like to point out that plenty of Afro-Cubans and women hold top positions in Havana, or how, in Venezuela, President Maduro proudly claims African heritage, and that the Venezuelans have had a female vice president since June 2018 (and Delcy was president of the Constituent Assembly before that, and minister of foreign relations before that). Even still, the diversity and inclusion boasted by the governments of Cuba and Venezuela don’t win any converts to communism, just as no one is won over by Britain’s constitutional monarchy just because a woman wears the crown; nor were the women of England, or the world, any better off under Prime Minister Thatcher.

Gen. Austin, Biden’s pick for secretary of defense, recently retired from the Army —though we’re supposed to maintain civilian control of our armed forces— and he was sitting on the board at Raytheon, the world’s third-largest defense contractor, when Biden tapped him. Neera Tanden, the incoming director of Management and Budget, is a hardcore centrist whose role in the Hillary 2016 and Biden 2020 campaigns was to paint Sen. Bernie Sanders and progressive Democrats as “crazy leftists.” As chairwoman of the Federal Reserve under Obama, Janet Yellen helped keep Wall Street booming while Main Street limped on, overseeing the continued transfer of the nation’s wealth to the upper one percent. Susan Rice, the soon-to-be director of the White House Domestic Policy Council, was a war hawk during the Obama years, a friend to African dictators, and has no experience in domestic policy. The next director of national intelligence, Avril Haines, helped give legal cover for Obama’s drastic expansion of drone warfare, with the “Hope & Change” President launching more air strikes in his first year than Bush Jr.’s entire eight years; in the end, between 384 and 807 civilians were killed in Obama’s drone strikes, according to the Bureau of Investigative Journalism. And Buttigieg, Biden’s choice for transportation secretary, is about as neoliberal as they come, a former associate at McKinsey, “the world’s most elite consulting firm”—that is, the consulting firm of the world’s most elite. “The Firm” is the éminence grise behind nearly every evil plaguing the world today, from the opioid crisis to the pillaging of Puerto Rico. Its clients include some of China’s most powerful state-owned companies, the Turkish autocrat Recep Erdogan, and the royal family of Saudi Arabia. And if you think none of that McKinsey training has gotten through, ask the poorer citizens of South Bend how good Mayor Pete has been for them.

I just got word that Biden has nominated Deb Haaland, a Democratic Congresswoman from New Mexico, to head the Interior Department. The news even earned Twitter praised from Rep. Alexandria Ocasio-Cortez.

This is a big deal.

Historic appointment. A visionary Native woman in charge of federal lands. Unequivocally progressive. Green New Deal champion. Exquisitely experienced.@RepDebHaaland sister, you are going to do such a great job. I am so proud of you and the movement.

As if a Native American were incapable of selling out her own people; as if the history of U.S.-Indian relations weren’t replete with examples of that happening. Anyway, I doubt hardcore environmentalists and Indian rights activists are that impressed, for the same reason that murders and rapes are usually committed by people who knew the victim—it’s always the people closest who harm you the most in the end. They’ve allowed Puerto Ricans to govern Puerto Rico since the forties, after all, but Puerto Rico is still a colony, and treated like one.

There were Jews policing the Warsaw Ghetto, just as Black and Brown cops patrol the streets of Chicago today. Race hatred and greed infects the oppressor and the oppressed alike, and the lust for power and money is known to overcome the bonds of family, to say nothing of community. That Biden has assembled a diverse staff doesn’t change the reality that he and they will do the bidding of the rich and powerful.

I am not comforted if my bully looks like me.

2 responses to “The Most Diverse Oppressors Ever (OPINION)”